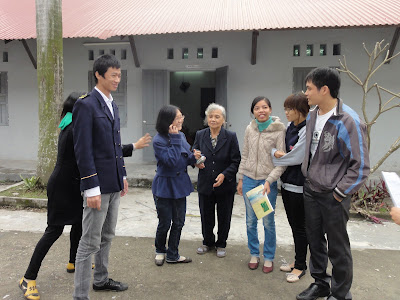 This morning at Nam Phap Church class we had such a good time. These students are so creative and have such wonderful sense of humour.  We began with a sticky-ball challenge. I put two 5x5 grids on the whiteboard, and put the letters of the alphabet in the squares of the grid (with x and y together). Two teams had to compete to throw their ball and hit consecutive letters, then say a word beginning with that letter. First team to complete A-Z won.  As always, it got highly competitive and noisy and it was so close at the finish! 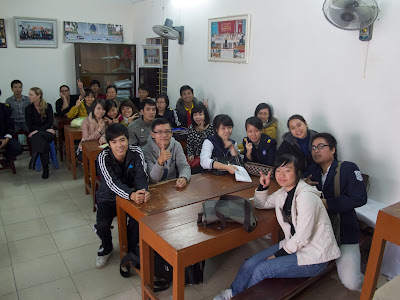 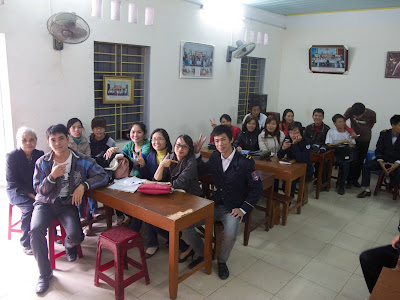 After that we briefly discussed movie genres, then we divided up into 5 teams. They drew lots to chose a genre (love story, adventure, comedy, horror, and action) and I drew a huge Mango Tree on the board. Their task was to create a story-line for a movie in their particular genre with the title "The Mango Tree". 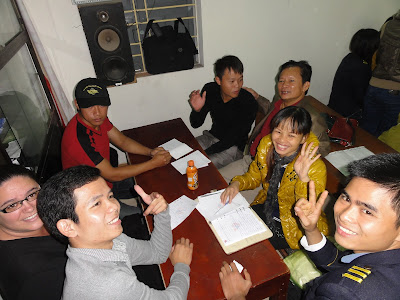 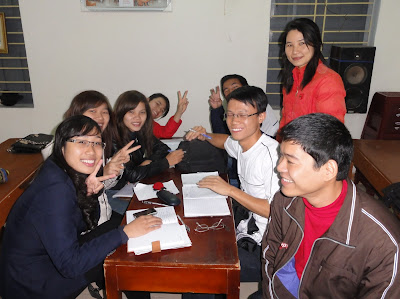 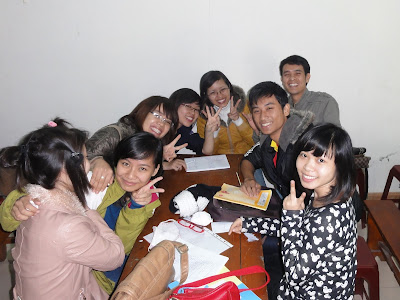 With great enthusiasm they rose to the challenge and the end result was a highly entertaining half hour as each team acted out their movie scenario!! 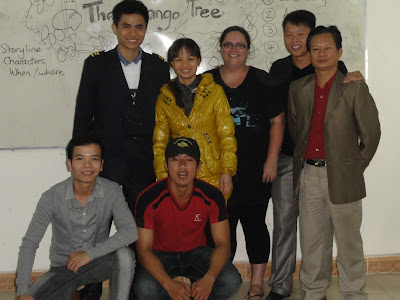 This group did an action movie and Khánh was a gangster, who kidnapped Tiên, (Katie and Hoàng's son), and held him for ransom.... big fight scene at the end   LOL. 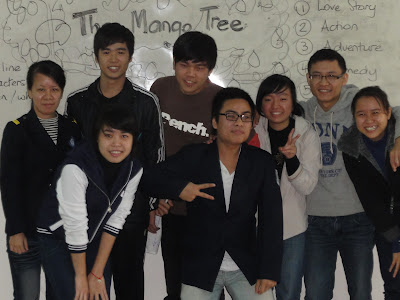 I can't remember what the adventure was ... must ask Xuân... 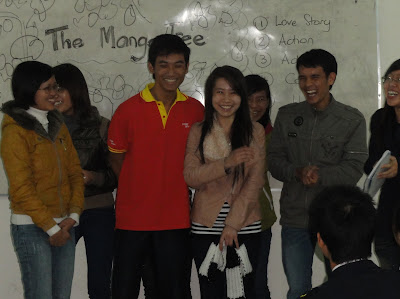 Tuấn Anh's team's love story was hysterically funny... as I recall, he had a girlfriend as well as a fiancee?? 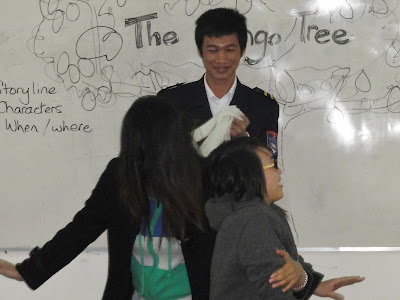 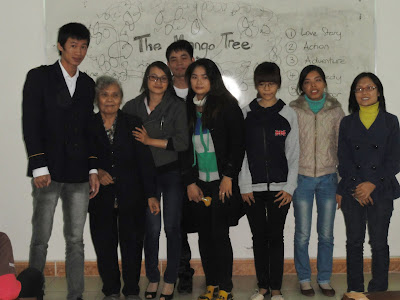 This gruesome lot chose Horror for their genre, with the mango tree harbouring the ghost of a girl who killed herself and was looking for more victims... 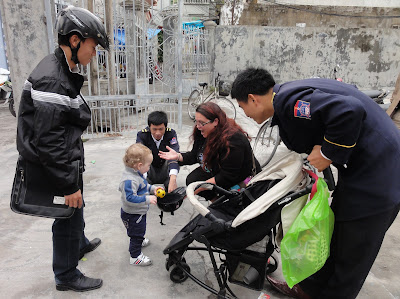 Little Sam is always a huge hit. Hannah Banks arrived just as we were leaving.  Her dressmaker had made me a couple of sun dresses from the fabric I bought when we were looking for Halloween costunes and she kindly dropped them off for me. They will come in handy at home with Summer coming on!

A bunch of us went to Sunflower Cafe for a yoghurt drink or coffee.  Our Hannah was on the back of Mr Sự 's bike and they got lost on the way.  Katie was pacing by the time she turned up safe and sound (after Xuân made a quick call!!) 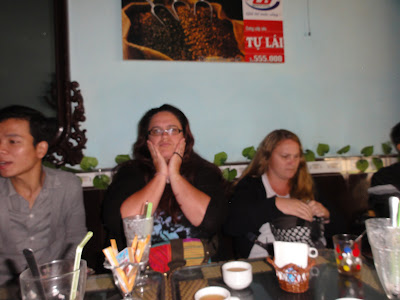 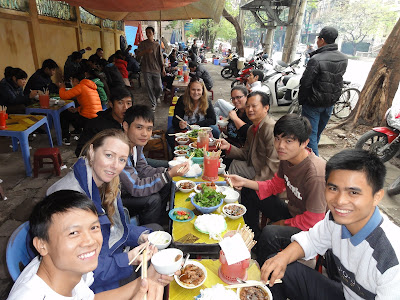 Bún Chả really is one of the best foods every invented by man.

Later that afternoon Tuyền and Tiên, came over and we all (including Xuân, of course) walked/rode to the uni to play volleyball. We ended up on the courts at VIMARU playing under lights. Khánh and Maarten joined us after a while. Tuyền is captain of the varsity volleyball team, and he was definitely the expert on the court. But Hannah and Katie used to play in Coffs and they held their end up too. Hannah was in the thick of things all night and had a great time. I, on the other hand, was all but useless... better off cheering from the sidelines! 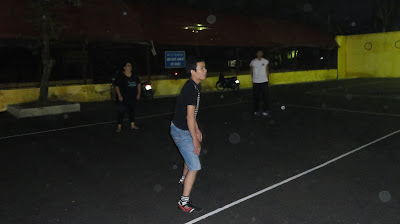 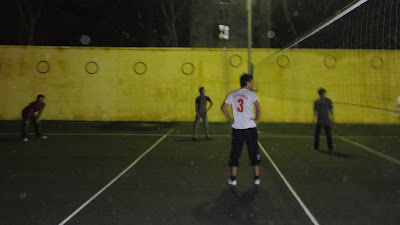 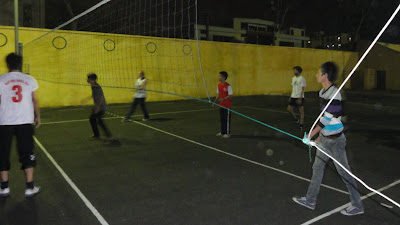 It was great exercise, though I'm sure there will be some bruised wrists and forearms tomorrow!   As we were leaving the uni, we met Mel on her way to VAIE and she told us she would love to join in next time.  Everyone went their separate ways except Tiên, who walked Katie and Hannah home.  But first we stopped off for bánh đa cua for dinner at the little restaurant near the traffic lights. 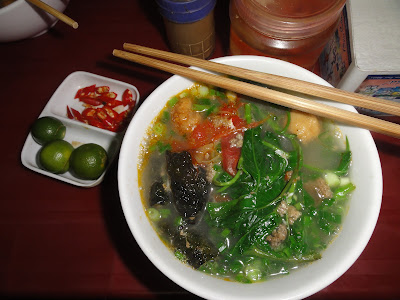 Hanny and Katie agree that bánh đa cua is AWESOME!!

After dinner, Tiên walked Katie and Hannah home and I went to work for one last lesson at VAIE ... again, a class I said goodbye to last week... bit weird.  So it was a bit of an anti-climax again this year.  Hmmmm. 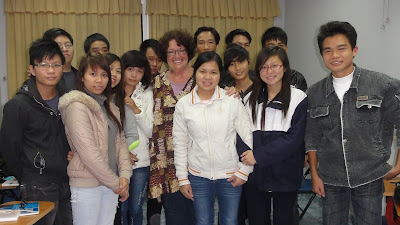 But here they are .. making a great start learning English to enhance their future employment prospects ... another lovely class.