Tonight for the first time in months I actually cooked dinner! I had the night off, so Khánh and Xuân came over and Khánh brought Jutta and Maarten, from Germany.  We had chicken drumsticks, garden salad, potato salad and bánh mì – simple as...  It’s surprising how many things I thought of cooking, but had to cross off the list because I don’t have an oven! I hadn’t realised how much I rely on an oven to cook for guests at home.


Khánh set up my laptop downstairs so we could have music and Katie came on Skype, so that was a turn around... Katie talking to me while I was preparing dinner. It has always been the other way around.
Xuân took over shallow frying the drumsticks as soon as he arrived, bless him. It’s so hot standing over a frying pan.  The boys got a huge bottle of beer hoi from the restaurant down the lane (about 20 litres for $5) and we sat down to a typical Aussie summer meal right here in Hải Phòng... 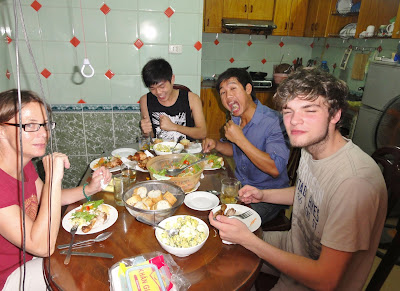 Jutta and Maarten both commented that the potato salad was just like they would have it in Germany – so there you go – small world.  We had fresh fruit salad and yoghurt or ice cream for dessert and by then we were all full. But not too full for a game of darts. 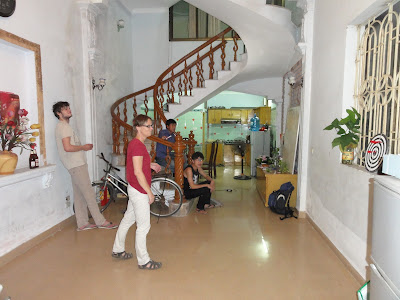 None of us were very good at it, but local rules are that the looser has to do push-ups... 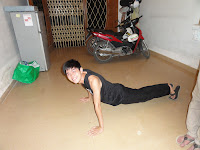 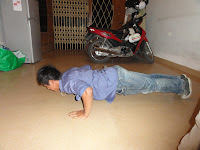 We girls had the option of singing a song when we lost, but Jutta opted for push-ups instead.  So did Quỳnh when she arrived a bit later. 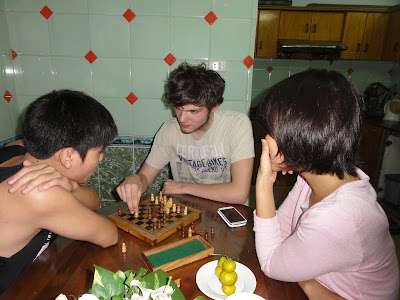 While Khánh took Jutta home, Xuân and Maarten played chess.  Though I must admit it didn’t take long for Maarten to get to checkmate!


What a lovely night. The boys had already washed up, so there was very little for me to do to clean up... just toddle upstairs!  How blessed am I.
Posted by Annie Gooch at 11:00 PM