Last night we had a cyclone. It was raining off and on as I finished work,  and as I walked past the dentist he was free and open for business so I went in. I have been avoiding dentists for more than 40 years, and my teeth are in an appalling state, so I have been promising myself that I would do something about getting them fixed while I was still here since dental work in Australia is so very expensive. No more excuses.  The first visit was easy ... less than $5 to have my teeth cleaned.  The next stages will be a lot more uncomfortable and a lot more expensive, but it has to be done  (poor me!).  Anyway, more about the dentist in later blogs.
By the time I left him, the rain was holding off, but it was very dark and the wind was very gusty.  The storm began in earnest a few hours later with high winds and heavy rain. I was snug and safe in my room but I could hear lots of noise around the house. During the night we lost power and about then I realised I hadn't bothered to find and charge my torch, neither had I closed the storm door at the top of the stairs. I think the three false alarms on cyclones last year had lulled me into a false sense of security! Anyway, in the middle of the night I woke up and the wind was howling, I could hear things banging outside, and it was pitch dark. Above the noise of the storm, I could hear water running down the stairs (inside), so I decided to go and have a look and close the windows and the storm door on my rooftop courtyard.  Climbing the winding staircase was precarious because there was so much water the marble was very slippery, and I was getting dripped on from above. The water was 2-3cm deep on the landings outside both the small bedrooms and there was a wild updraft wind coming from downstairs ... so much so that I could not pull the windows at the top of the stairs closed because the wind (from inside the house!!!) was too strong. I managed to close the storm door, but then realised that the water was all coming in from the skylight, not from the courtyard anyway.  By then I couldn't imagine where all the wind was coming from downstairs, so I painstakingly felt my way back down in the darkness. As I got to the bottom flight the wind was blowing my hair around!  And when I looked to my front doors there they were wide open!! The wind had blown them open and the storm was blowing in. These doors are each 3m high and 2m wide - so it was a very big space!  I was barefoot (of course) and I was so very careful making my way to the doors - I certainly didn't want to slip over. But when I tried to force the doors closed I quickly realised there was no way! Even if I did manage to get them locked again, the pressure of the wind would soon force them open or worse still, blow out the glass. So I just had to push them wide open and go back to bed!!
By morning the cyclone had blown over and I surveyed the damage... surprisingly little, considering. The floors everywhere except in my bedroom (and the bathrooms....) were wet  - 3cm deep in both Will's and Tony's rooms.  I was busily mopping up downstairs when Xuân arrived!  What a blessing!!  We slaved away for a couple of hours bucketing the water - starting with the top landing. All up we shifted about 40 buckets of water. Xuân began to resemble the sorcerer's apprentice as he laboured up and down the stairs with bucket after bucket of water!!  But eventually it was done.
Then Khánh came over with his friends Parazini and Cường and we headed downtown to get stuff for making costumes for the Halloween Party at Rie and Emily's on Wednesday night.  My goodness ... that was an eye-opener.  Everywhere we went there were trees blown over and localised flooding even 12 hours after the storm 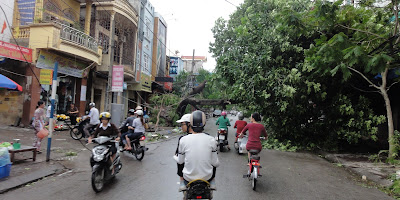 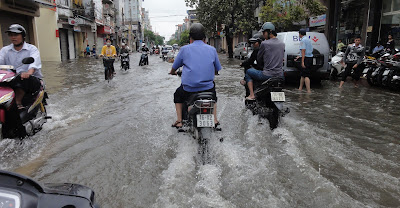 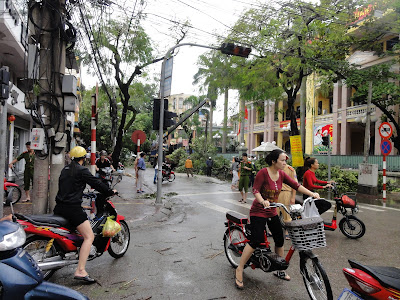 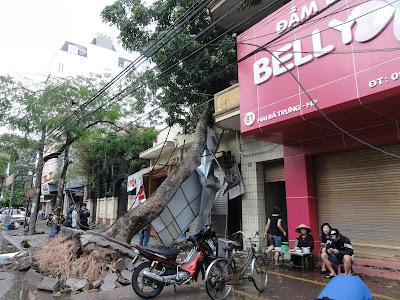 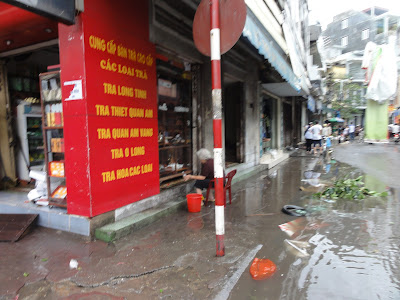 As we rode past this corner, I was amazed to see this old lady sitting with a scrubbing brush and a bucket, cleaning the window sill of her shop ... with the flood waters still receeding behind her! 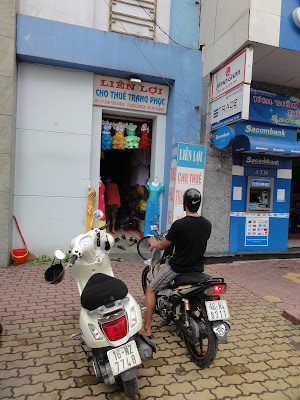 This is the costume hire place... 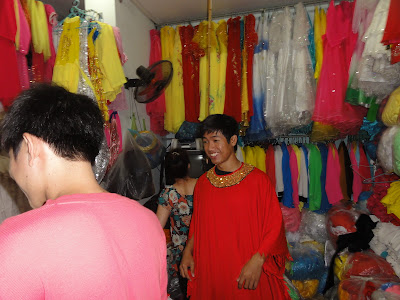 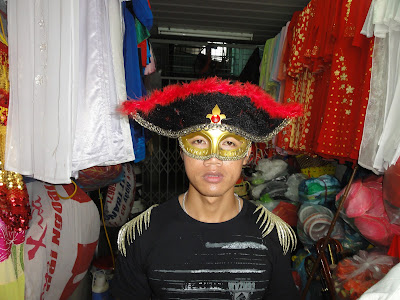 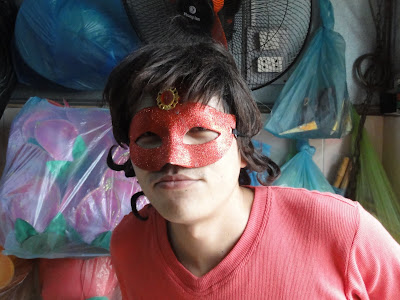 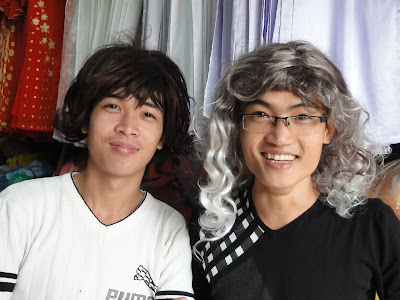 Lots of fun trying on costumes ... and all we came away with was a mask for me ($2.50 hire!). The boys all opted for buying fabric and making their own.  So we headed for the big market. 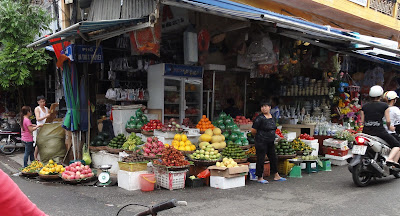 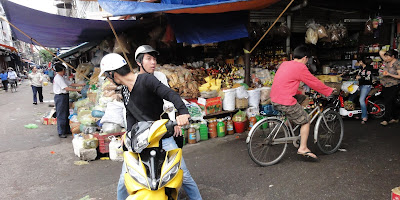 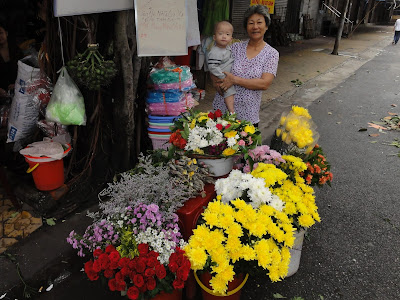 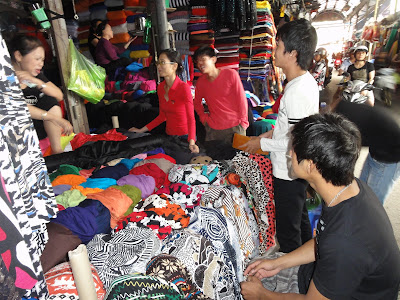 The boys bargained with this lady and came away with fabric to make capes... and I bought some fabric to get a couple of summer dresses made from the one I wear all the time at home.

On the way home I asked Khánh to stop so I could take this sad photo ... the huge tree in the carpark at VAIE was uprooted during the cyclone. Imagine the noise it made as it fell! 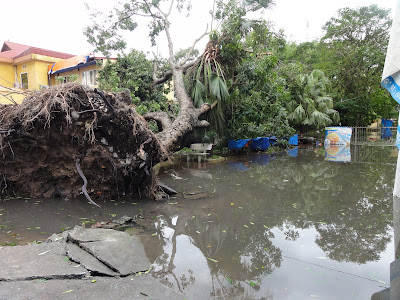 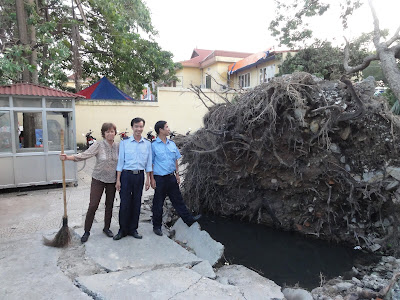 I took this next photo the next day ... Believe it or not , there was a small black fish swimming in the root-hole!!! How on earth did that get there?? 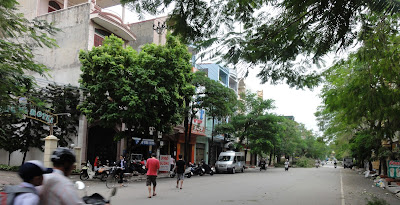 You can see the branches across the road on Văn Cau as we headed for our local phở restaurant for lunch. After lunch I made a start on the custumes with a cape for Xuân ... he wants to go as a vampire...  Hand sewing is pretty tedious, so I do hope it holds up!!