We are the Champions!

Wednesday was a busy day, but fabulous!  It began with our usual morning walk, then I had to get ready to be picked up at 8am to teach in a kindergarten. I was all ready when I got the message to say the class had been cancelled, so I relaxed for the next few hours instead...  Then Lee and I went to Texas BarBQ to meet the Wednesday ladies. Melissa came too, so we were three Aussies in the midst of the large international group. It's always interesting chatting to the others. Today I sat next to Miki from Japan. She has two daughters the same age as Jordan and Bailey and they lived in London for two years before coming to Hải Phòng.  She asked me if I could recommend any books for her 9 year old to read, so I said I would ask Jordan what her favourite books are. We'll also see if the two girls can skype one another.... in another era, we had pen pals...these days communication is instant! It's a very different world from when I was nine  LOL

In the afternoon, Nguyên Trung took me for coffee with Trung Ho. He is a father now, and his son looks just gorgeous. I hope to meet the baby soon! 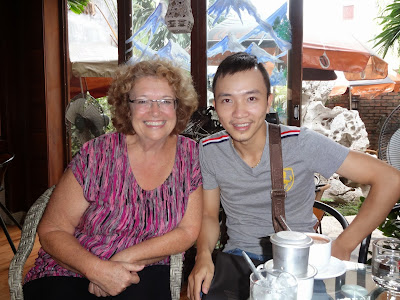 They dropped me off at school, where I had a 5:30pm class to prepare for. Classes are always enjoyable, and I am getting to know the students again this year. I find the 2 hours go by very quickly.

As soon as I finished, I walked to VIMARU to the big concert hall to watch Khang's dance team perform.  The event was called "Hội thi sinh viên và tình yêu biển đảo" (Contest Students Love Island).  It was an inter-faculty competition involving three parts. They had to make a video or animated clip about the island chosen by the group; there was a quiz about the Islands of Vietnam; and finally each group had to present a dance - drama performance themed on their chosen island.

There were several singing items as well... 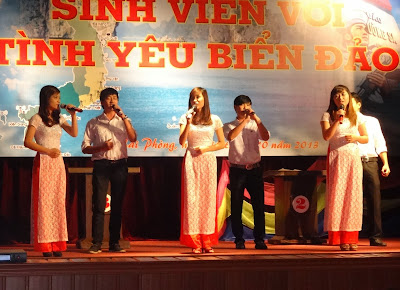 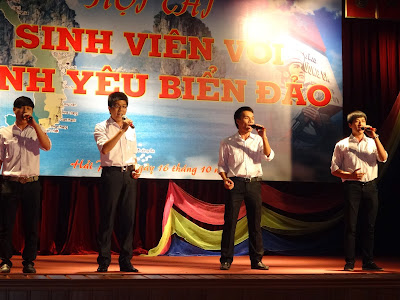 Then the quiz, with four students reresenting each of the four groups 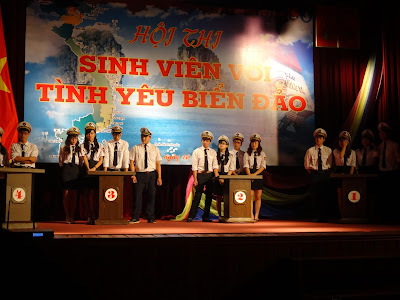 And then the dances.  Khang choreographed the item for the Navigation and IT Departments... It began with Đạt as a bugler playing reveille to wake up the soldiers stationed on the Island to begin their day of training. 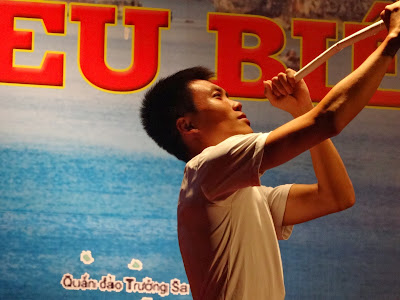 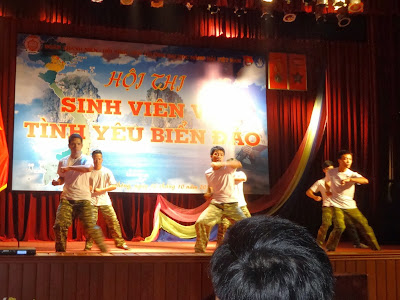 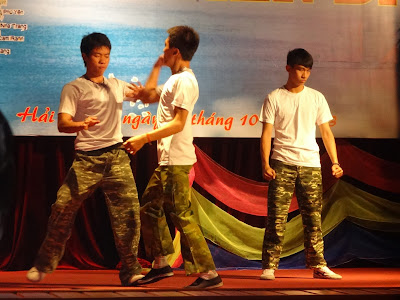 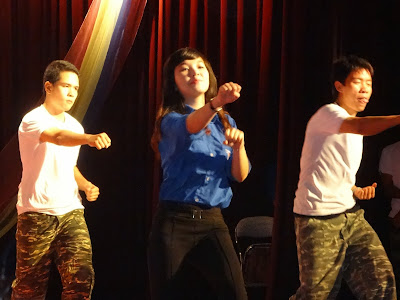 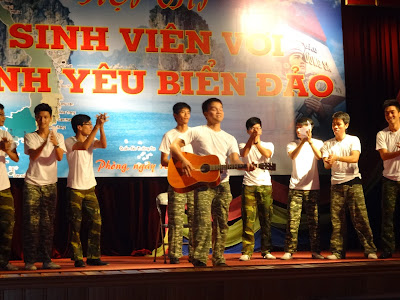 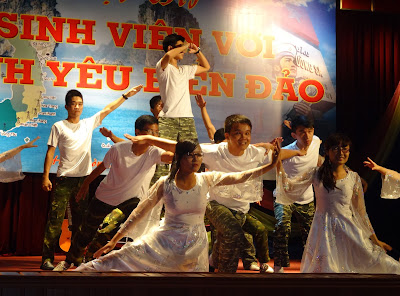 They also depicted cameraderie and patrolling the oceans... it all flowed really well and there were many students involved. Quite remarkable to have been put together in just two weeks! And there was great excitement when the winners were announced... 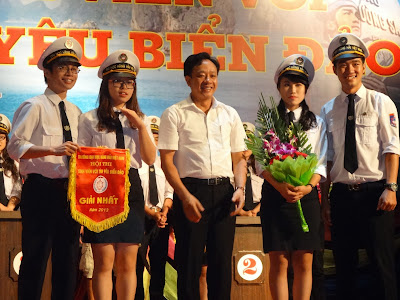 Navigation and IT Departments!!! 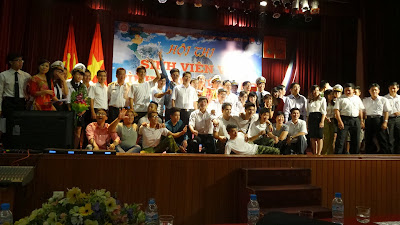 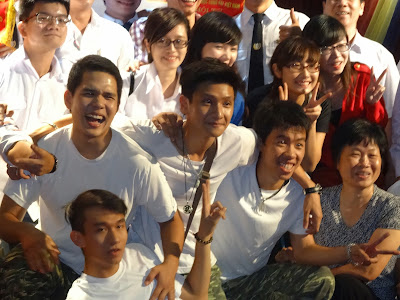 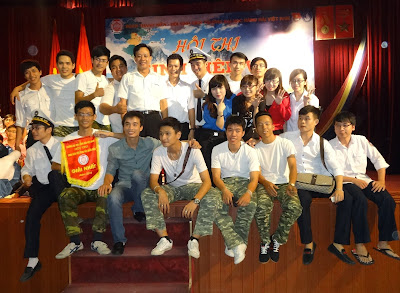 Of course, when the competition was over, there was a 'small party' to celebrate!  We all made our way to a Bia Hoi next to VAIE... a large group of Engineering and Ship Building students (who were runners up), and the winning team from Naviration and IT.  Many toasts, a continuous stream of hot food and lots of laughter and singing... 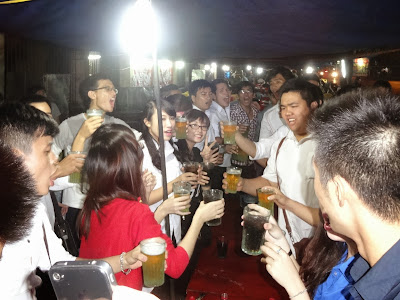 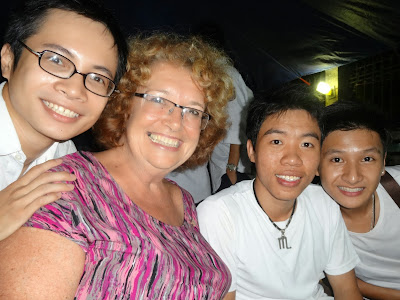 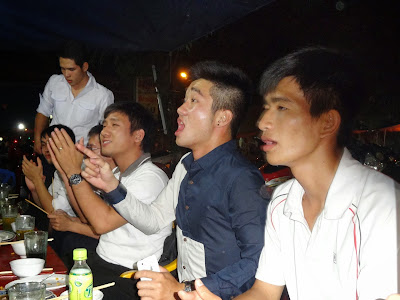 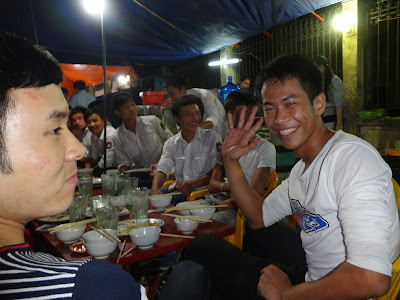 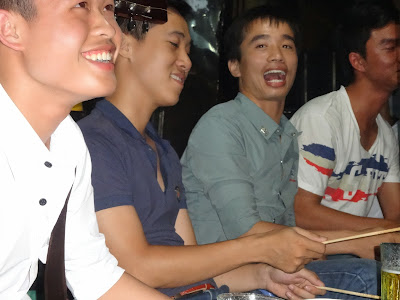 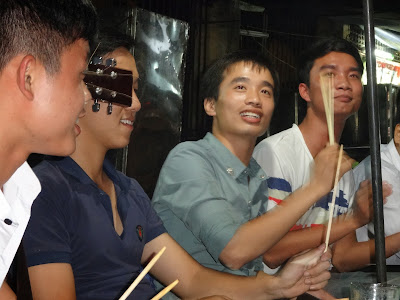 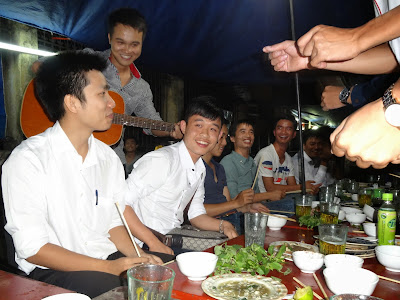 Some lecturers and leaders were partying too... I bailed at midnight and Khang gave me a ride home, very glad I didn't have to walk for it has been a full-on, wonderful day!