Plenty to do on the weekend...

The weekend began with my usual early morning walk... but it was a quick shower and change to be ready by 7:15 to be picked up and taken to the senior high school in Kien An to teach the same four classes I taught a fortnight ago. This time my TA was Anh, a friend of Josie's. Being forewarned, I was better prepared this time, with lesson plans suitable for the real level the students are at, so the classes were easier than last time. The fourth class was such a good one I gave them 11 out of 10 for my evaluation and they were thrilled. I'm not sure how the admin department will view that, but they really were an exceptional class, especially after the noisy, unruly mob I had just before them!

That filled up the morning and I arrived back just in time to go and meet Linh for Bún Chả. It was the first time this year I've had the chance to sit and talk with her. When we see one another at VAIE we are busy with teaching, so it was lovely to have time to just sit and chat. After lunch we came back and played Tenzi... another enthusiast for this simple, silly game. She came up with some new variations - like 3-4-3 Splitzi and Tenzi twin towers - Haha. We made plans to meet for lunch more often.

Saturday night was a bonus - Xuân finally had a free night! so he came and took me into town for dinner. We had cỏm sườn - rice and a kind of sweet and sour pork spare ribs, which was very tasty. 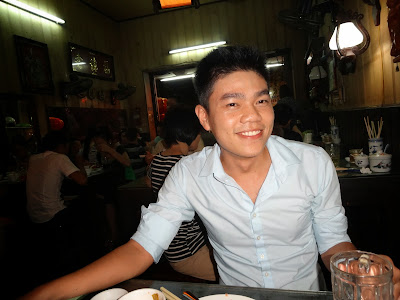 Xuân works full time and has classes every night. He will graduate with his second Degree next year. Tonight's class had been cancelled at the last minute so that's when he called me. He has made the transition from student to mature working man - suave, well groomed and beautifully dressed. It 'warms the cockles of me heart' to see him doing so well. He encouraged me to hold a meeting to explain Isagenix to everyone... and he's right, I need to do just that.

I had already made plans to meet Tuyền later in the evening, so after dinner, we headed back to my room and we caught up with him too. My precious friends...

On Sunday morning I had a sleep in... but still headed out at 8am for Trang, Mi and Trung's new English Club - "Make Friends".  It was their first meeting and they had invited me to be their guest. There were a dozen or so people, several of whom I already knew. 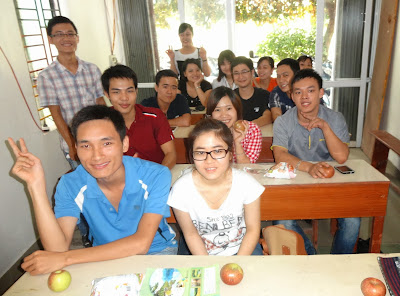 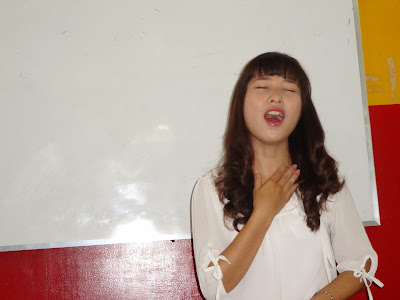 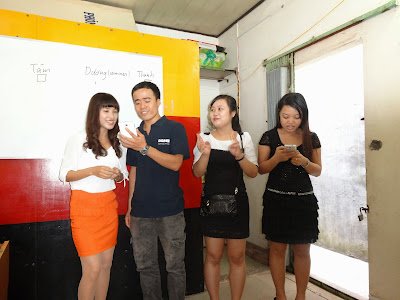 Some songs, some games and some discussion and the two hours passed quickly... English clubs are a very pleasant way to study and practice English! Trung took me to the market on the way home and bargained for me as I bought my usual variety of fresh fruit and vegies. Probably saved me about 20%!!  He stayed and shared some for lunch.

Then in the evening, I caught a taxi to Texas BarBQ with Graham and Lee to catch up with John and Melissa and Josie for dinner. It was great. Even though we all work at VAIE, we are rarely in the same place at the same time, and if it's at work, we are usually busy preparing to teach etc. We really do share a common bond living here and working together. It is an experience that outsiders can't really appreciate, so it is really easy to relax and talk together.

Khang picked me up from the restaurant and took me to PEEP English Club at VIMARU. It was much better tonight, as the students were quiet while each one was speaking, so we could hear what was being said. The main discussion topic was mobile phone usage, so it was relevant for everyone. After the club finished some of us went for nước mía... perfect on a hot night! 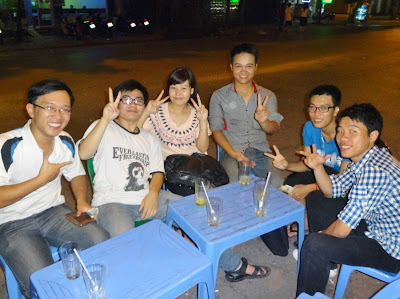 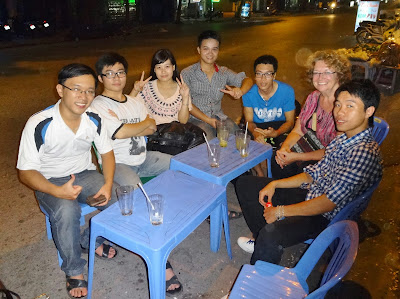 And that was my weekend!