Today I taught the church class for Tony, because he went to Do Son for some R&R last night. It was great as usual. The class format is that we read an article about a given topic and discuss new words or concepts for the first half, then break into smaller discussion groups for the second half.  Then one person from each group summarises what they discussed and answers questions from the rest of the class. What was special today was that Madame Tra (Cha) talked about her wedding. She speaks English very well, but has always said no when urged to be the spokesperson for her group. She is a beautiful, gracious 75 year old who comes to class with all the young ones and is clearly loved and respected. Her husband died a few years ago, and her three children are all grown and live with their families in other parts of Vietnam, so she enjoys the fellowship of the enthusiastic young students when they gather to practice their Engish each morning. 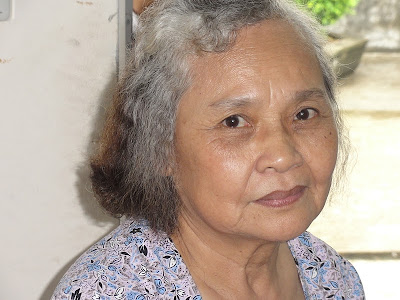 She told us that she was a teacher - teaching Russian in a place 70 Km from Ha Noi, and a colleague played match-maker. Her groom was in the army (it was during the "American Invasion") and everyone was very poor so they didn't have an engagement. Her family came up from Ha Noi on the train and they all had a meal at a little restaurant near the station. The wedding and the party were held in the school hall and they both had five days off work for a honeymoon (but they couldn't afford to go anywhere). After that he had to go back to the barracks and they were separated for a long time. Life was hard, but she never cried. Some time later, they were all evacuated because the Americans began bombing. She said they were all terrified of the B52s.

I was acutely aware of the sad fact that Australians got sucked into that war. I was at Uni when they started conscripting our young men into the army, forcing them to come here and fight, in support of our allies, the Americans. No-one here in the North seems to recognise the fact that the South Vietnamese government at the time asked for military assistance, and their version of history records that it was an invasion by America. But the overwhelming thing is that the Vietnamese people do not hang onto the past. They are not filled with hate or bitterness, and we westerners are welcomed regardless of the atrocities of war and the hardships and sorrow they endured. I apologised for our involvement and thanked them for their gracious acceptance of me and their love and friendship which is so freely offered. What would the rest of the world be like if all peoples could be so forgiving. Conflicts in the middle east and Africa and Ireland etc, etc... so many people's lives are twisted by hatreds and prejudices that are generational. 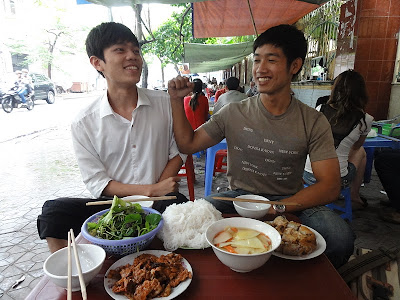 After the class, Khanh and Xuan and I went for Bun Cha for lunch - fabulous.
﻿