A culture to be cherished


Today after teaching the church class (which was great fun, as usual) I hurried home to find Miss Trang Ahn and little Linda from the kindergarten class already here and waiting pariently. Gene arrived soon after and Trang Anh called a taxi to take us to lunch with Mr Thanh, the Kindergarten owner (whom I hadn't met before).

We went to a restaurant near VAIE called Hong Kong. Mr Thanh wanted to meet me and Gene, who will take over my classes. It turns out he was once one of Ian's students at VATC, so Ian was there, too, as was Mr Trung, a part-time teacher at VATC/IE whom I have often seen, but never had opportunity to talk to.
We were ushered into a private dining room upstairs and enjoyed a long lunch with easy conversation and lots of tasty food, which just kept on coming! Mr Thanh is a wonderful host and we thoroughly enjoyed ourselves. 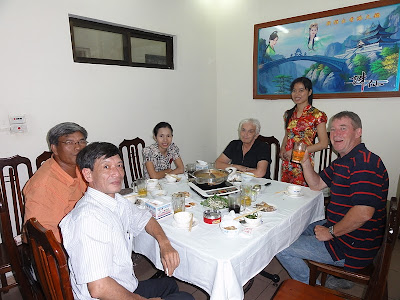 There were two standouts of Vietnamese culture that blew me away. The first was little Linda (her English nick-name). She is Mr Thanh's grand-daughter. She's five years old and was wearing a beautiful party dress. Normally at that time of day she is sleeping, and you could see how tired she was as the dark circles grew under her eyes, but she didn't say a word of complaint... not a peep! She sat there with all adults speaking English and didn't fidget or wriggle or whinge. . . a perfect example of a child who is 'seen but not heard'. I cannot imagine an Aussie kid behaving so beautifully - they would be demanding attention... something to play with... trips to the toilet... anything but sitting patiently, quiet and still. Eventually the waiter brought a couple of chairs which they lined up and she laid down and went straight to sleep... on the hard wooden chairs... ...she was still sound asleep about an hour later when we were leaving. I couldn't bear the thought of them waking her up, so I carried her downstairs and waited for the taxi. 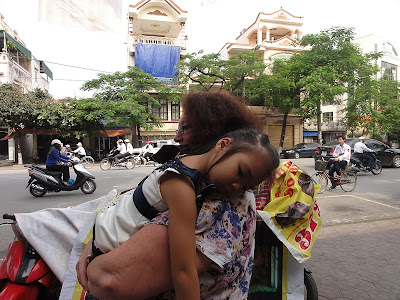 The second thing that really blessed me was totally unexpected. Ian had mentioned that Mr Thanh had a great singing voice and when Mr Thanh was making arrangements for us to come to his home for a meal, I asked if maybe then he could sing for us (thinking maybe karaoke?). He stood up and checked the door, then sat down and explained that his song was a traditional Vietnamese folk song... you're in my heart - stay with me... Then he started to sing.

I cannot begin to describe how breathtakingly beautiful it was... a haunting melody with so much emotion. Both the words and the style of music were completely foreign to me, but not the emotion. I now what it's like to hunger for your love to be near and not go when you know there is no choice. His voice was rich and resonated in the small room. Spell-binding is a good word to describe it. I do hope he will sing again and I can video it.

I asked him if he also played any musical instruments, but he explained that when he was growing up the people were very poor (the 'American War' was going on), so there was no opportunity for such luxuries, but he could learn to sing the songs of his people.

I understand why my students are so proud of their country. They know their heritage that goes back thousands of years in spite of wars and occupation. This culture should be cherished.
Posted by Annie Gooch at 12:41 PM