The young'ns have gone!


Got a rude shock this morning!  Dave knocked on my door and handed me his phone. Eathen had sent him a text announcing that he, Sarah and Amie had all handed in their resignations, effective immediately... citing concerns about government, laws and visas and being misled by VATC as their reasons. They all have their phones turned off, so I know no more than that.
Sarah left for Hanoi on Friday since she had no classes that day, and Amie and Eathen both left early on Saturday morning... quietly enough that I didn't hear them.  I knew Amie was planning to spend the long weekend in Hanoi, but last I spoke to Eathen, he was undecided... said he wanted to save his money. Presumably they had it all planned. They have left their bikes here, but took all their keys. What really surprises me is that none of them said anything. Why didn't any of them tell us what they'd decided and why? I'd have thought our friendship warranted that as a common curtesy, since their decision has a huge impact on us... especially me.

This morning, after getting the text, Dave checked their rooms... Eathen's is locked but the girls' room wasn't. It was quite a shock to realise that Amie had left the doors to their balcony open... anyone could have got in over the last four days. Dave was furious. I'm secure in the knowledge that God is my fortress and protector.  The room is a mess, but most of their stuff is gone, so they obviously don't plan on coming back 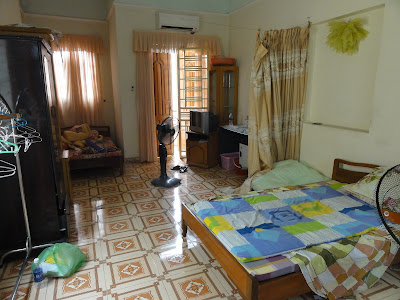 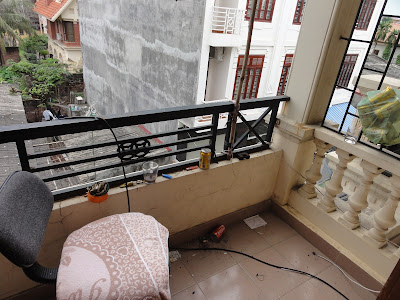 While I was up here with my camera, I took a photo of our street... I hadn't seen it from this vantage point before 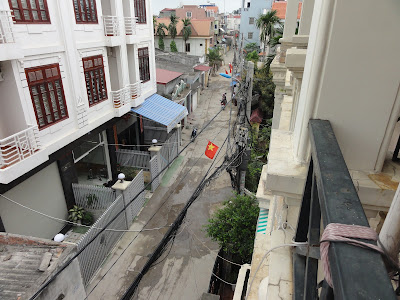 So that's what happened this morning! Ann (at VATC) must be feeling a little frantic! And Dave is leaving on the 11th May .  Then there'll only be me till they recruit some others.... Apparently we're not into the busy season yet (summer) but I expect I'll be so busy from now on in, that it won't make much difference for me!  The good news is that I'll be paid for all the extra classes, and I'm very pleased about that.

I'm surprised I haven't heard from Ann yet... it's 11am and I'm sure she'll need me to teach an extra class tonight. I'll give her a call....