So our long weekend draws to a close and it'll be classes as usual tomorrow night. I actually got going this morning and headed out for the lake I spotted on the map... Hồ An Biển  . I wasn't as early as I'd hoped to start out. It was 10 am already, and when Mr Cuong hailed me from across the road I decided to get him to take me there and walk home... turned out to be a good decision, because by the time I returned 2 hours later, I was very hot, sweaty and tired!
Anyway, the first thing I explored was the War Memorial... beautifully maintained formal gardens and a marble monument to remember those who lost their lives fighting for Vietnam's independence. 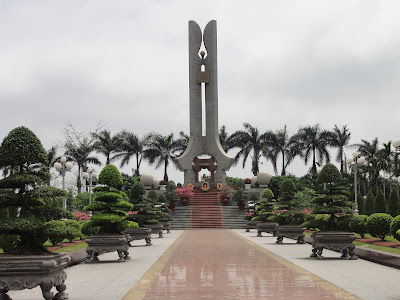 If you look carefully at the bases of there beautiful topiaried bonsai trees, you'll see that the legs are on top of turtles! 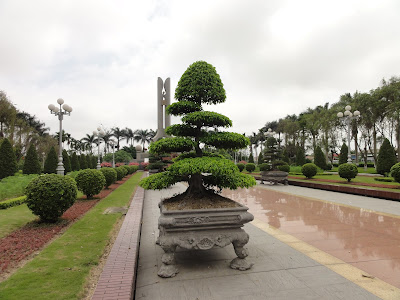 Since it is spring, flowers are beautiful. This is the closest I have found to a park, but it is a very formal place, not conducive to sitting and relaxing. 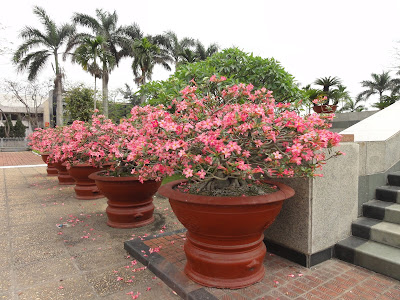 I haven't bought myself a conical hat yet, so I borrowed one from Amie, and it looked pretty silly 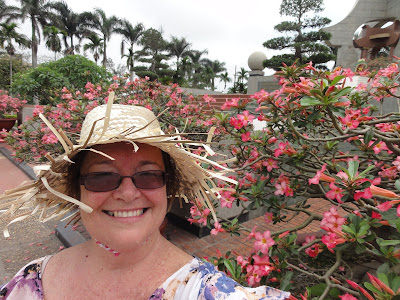 Across the road from the War Memorial there's a Catholic Church that looks pretty typical of the churches I've seen in Vietnam. Interesting that the uprising that ousted French colonial brutality and then the advent of communism in Vietnam still left the churches largely intact. 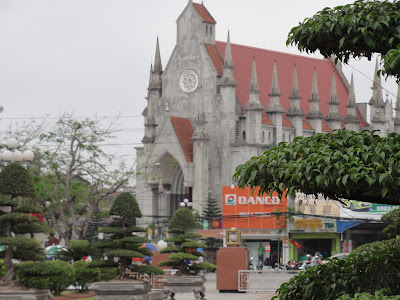 I walked down the street next to the memorial and there was a row of florists making up the big floral displays that are used for good luck when opening a business, or for funerals... any occasion worth celebrating with grand gestures 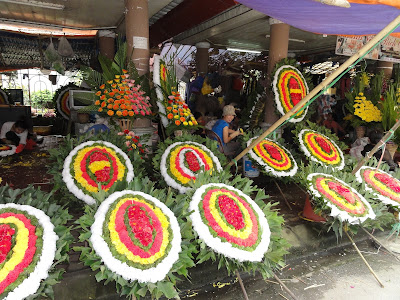 Across the road from here were these bundles - each one contains the cooking facilities, tables and chairs and awnings... everything needed for the street cafes, which will be set up in the evening 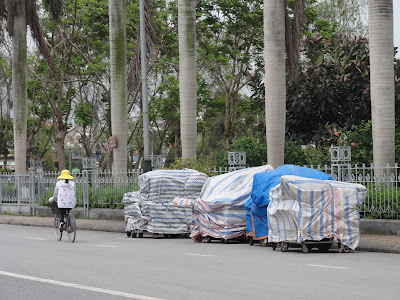 Anyhow, my first view of the man made lake was pretty disappointing (I was hoping for parkland...) 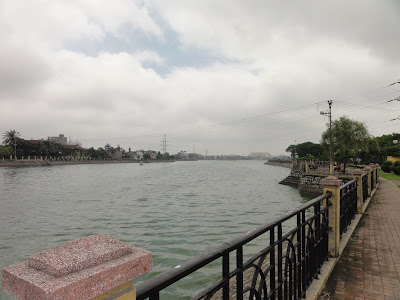 buildings all around it 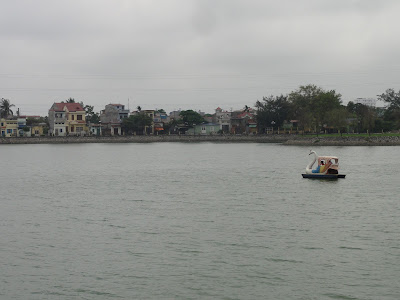 You can hire these swan paddle boats, and a few people were out in them. As I was walking along a child on one of the boats called out across the water "Hello!", so I called back "Hello!". Then this little voice piped "How are you?" "I'm fine, how are you?" ...Delighted laughter, then "I'm fine!  Goodbye!" As I waved and called out "Goodbye!" I could hear the excited chatter from the boat as the little one and his parents enjoyed the moment.
In Hai Phong it's not the surroundings that bring pleasure, it's the people. There were not a lot about, mostly young couples. As I walked past one pair, they said "Hello", then the young man asked me if he could take a photo on his phone of me with his girlfriend, so of course I agreed and then got him to take one with my camera 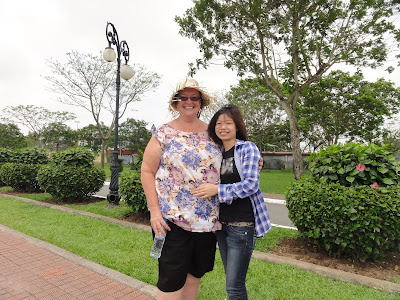 Aren't I just a ball of style?? Shame you cant see my sensible RED walking shoes that complete the outfit.  Hardly any wonder people stare... Anyway, as you can see, considerable effort has been made to landscape the edge of this side of the lake, and the water is deep and surprisingly free of litter. In a few years, there may well be trees here.
I kept walking round the lake till I came to the laneway that led out to An Da street market. This lane is quite typical, so I took a couple of photos to give you the idea 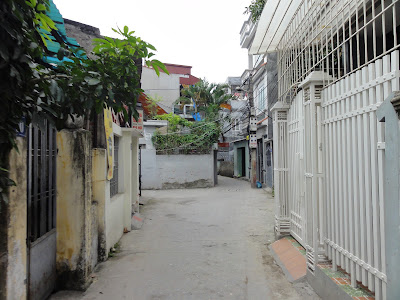 they are houses on either side 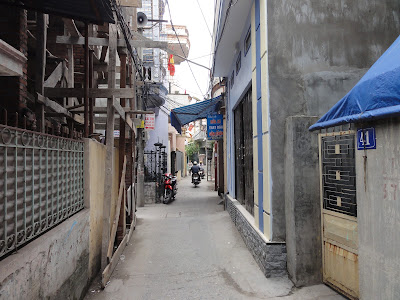 Dưỡng An Da is the name of a street that has market stalls down both sides and goes for a couple of K's. As I got to the street, I decided to take a photo 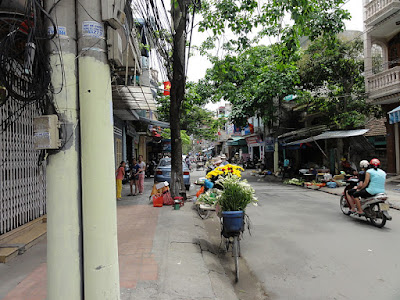 The three little girls on the left saw me and called out "Hello" , so I went over to them and we had the usual little conversation... even got as far as exchanging names, which they thought was pretty cool (and judging by the smiles all around, the people thought it was pretty cool, too). Gorgeous little girls - the one on the right was Linda. 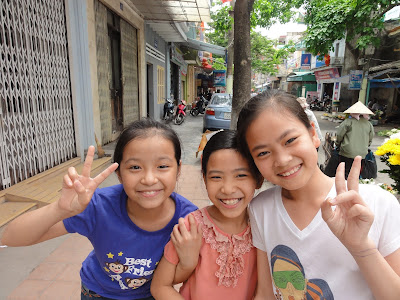 By now I was ridiculously hot, and attracting a fair bit of attention... usually friendly greetings. They sell everything... fish, meat, fruit and veg.. 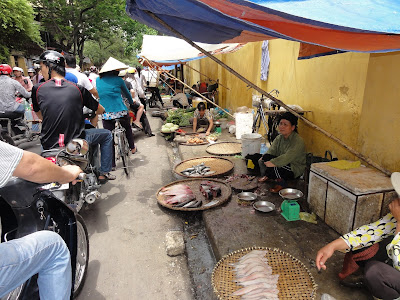 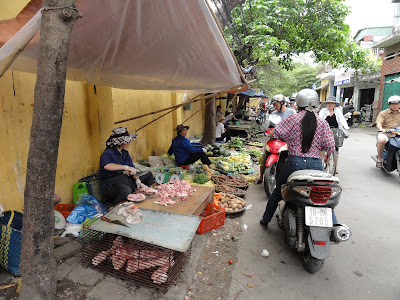 There's an old undercover market that looks really dark and scary, so I stepped in out of the glare of the street to check it out. The ladies in there were really friendly and all called out as I went in 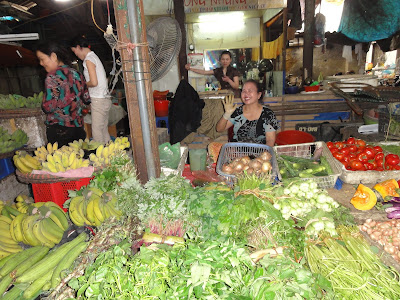 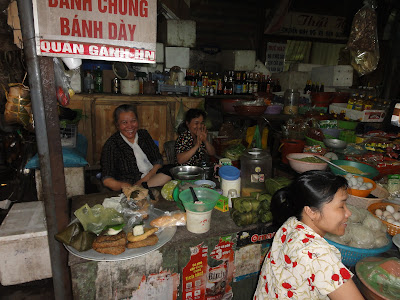 So I decided to take a video, and all of a sudden they all went quiet!

After leaving An Da street, you come onto Lach Tray, which is the street the school is on... half an hour from home. These last two photos are of Phố Nguyễn Bỉnh, which is the street market I walk past every day...I waited for  break in the traffic, but it looks like a pretty boring photo 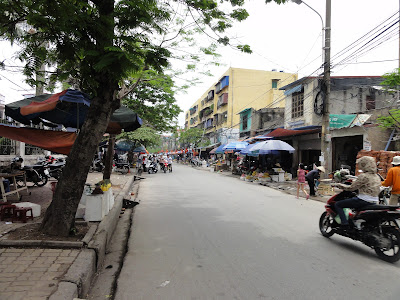 And I bought some delicious watermelon from this lady... perfect recovery food after such a long hot walk!.... 'cept I missed the watermelon in the photo... 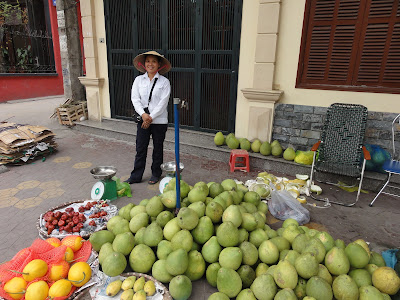 Tonight was simple, normal food for dinner at the restaurant on the corner that sells beer for 20 cents a glass... mì xào bỏ (me sow boa) 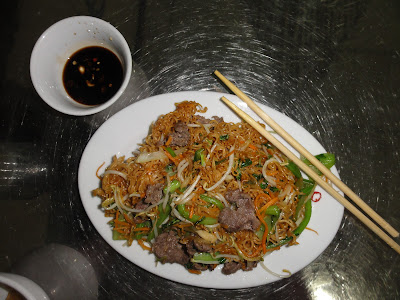