Goodness, it's May already! This morning I chatted to Katie, did a load of washing and had a pretty slow morning. It's the second day of our long weekend, so I had decided to go for a walk to the lake (about an hour away), but by the time I got around to it, it was already after 11am, and the weather was too hot and steamy to begin such a venture. So I just walked the long block to the supermarket and back, which only took an hour. I resolved to get cracking early tomorrow morning and get to the lake before the day warms up too much (Today was 34).
Dave and I went out for a nice dinner tonight, and tried out a restaurant called Bacardi which one of his friends had recommended. We had 2 lamb dishes - in orange sauce, and herbed - salad and chips: 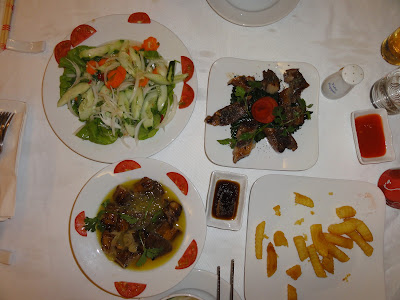 As you can see, the chips and salad arrived first... The presentation was lovely, but we got much better value last night for the same $10.

One thing that was unique here, though was that each table had it's own TV!!! 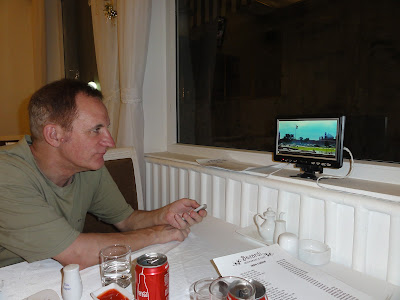 Everything was spotless, and the food was good, but we were the only customers, with 5 staff sitting at the end of the room. There was a middle aged western man with them - presumably the owner, but he didn't come near us. I don't know how they stay in business. All of the Vietnamese restaurants on Van Cau that we walked past were doing a roaring trade. Lots of families eating lots of hot-pots. Obviously the locals prefer places that are noisier, cheaper, with little chairs close to the ground where you just throw your bones and rubbish onto the floor!