Feeling a bit ordinary with a sore throat and a cough that kept me awake half the night... but to get to the embarassing bit...

Yesterday I toddled into school in the arvo with my lesson plan all set to go, in time to get my photocopying done. Then I decided to grab some dinner at the school canteen... even took a photo of it! 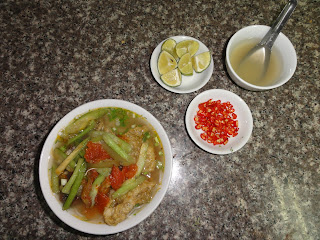 So there I was, happily eating my Bánh đa cua, when one of my students, Dragon, came down the stairs (from the classrooms). He said hello, then asked me if I was their teacher tonight  (we alternate with Vietnamese English teachers) and I cheerily said yes, I'll see you later. Shortly after, two more students, Sapphire and Shinee also came downstairs and waved hello. I was surprised that so many of them were here so early when it suddenly dawned on me that the class was at 5:30, not 7:30!!  Totally mortified, I hastily paid for my half eaten dinner and rushed off nearly half and hour late!... not that the kids minded a bit... I remember how cool it was if a teacher was ever late when I was at school, but I was horrified.

This morning I taught my first class at the other language school. It was a small adult class and we discussed Environmental Issues... pretty meaty topic for elementary level, so they had to learn a heap of new vocabulary along the way. And as usual, the best part of the lesson was the game at the end where they raced against the other team to regurgitate that vocabulary... very competitive and lots of fun. And the pay is way better than our usual rate, so I hope to pick up regular work there.

This arvo I have a children's class at 3pm at VATC, then an easy, early night! My voice is coming back. so I'm praying tonight will be sleeping all the way with no coughing!
Posted by Annie Gooch at 11:52 AM