SUNDAY 17th April
On Saturday I headed off to Hanoi with Lynh. We planned to go to a Don Moen worship celebration, but at the last minute, the govt wouldn't approve of a venue, even though they gave permission for the event to be held﻿... disappointing! We were already in Hanoi, so we just did something else... Anyway, we couldn't leave Hai Phong till Lynh finished her class at 11, then we rode her motorbike to the bus station and caught a coach for the 2 1/2 hour ride to Hanoi ($3.25)... then a city bus to the Citadel (15c) - 20 minutes. 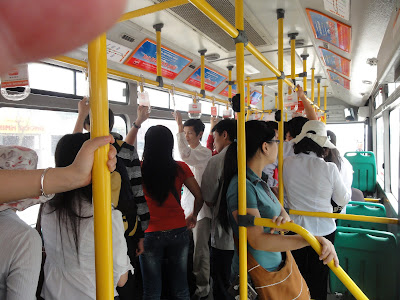 First place we had a quick look at was the Vietnam Military History Museum. The first thing you see is this 1000 year old flag tower in the distance. 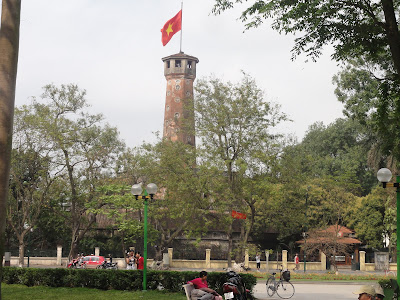 Then there is this array of cannons that are centuries old. 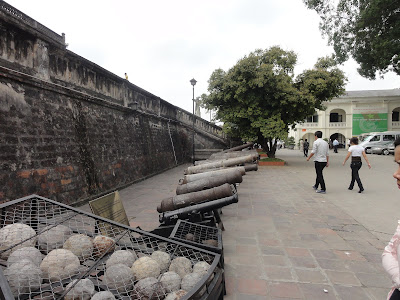 I was totally impressed by this huge sculpture made of debris from the American war: 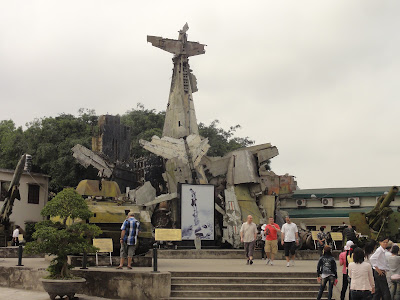 This painting depects the relocation of the Royal Court from Ninh Binh to Hanoi (about 300Km) in 1010, by decree of Emporer Lý Thái Tổ
You +1'd this publicly. Undo 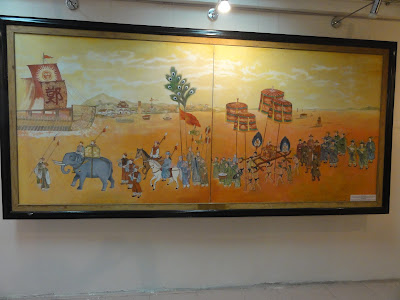 Sadly, after all the bombing, there are only portions of the ancient walls of the Citadel that they built still standing 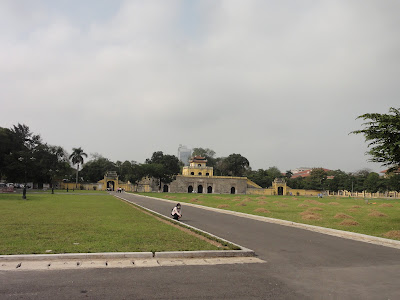 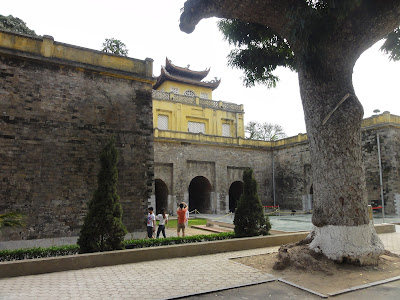 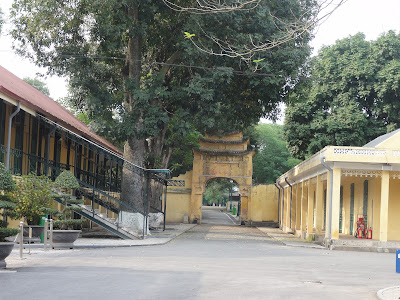 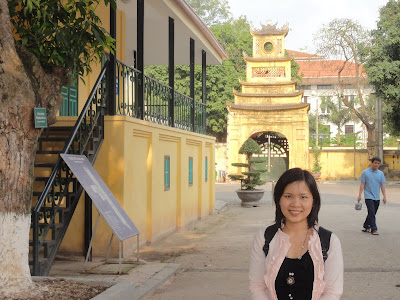 This is Lynh. Of course I took heaps of photos, so now the hard part is deciding which ones to include in my blog... 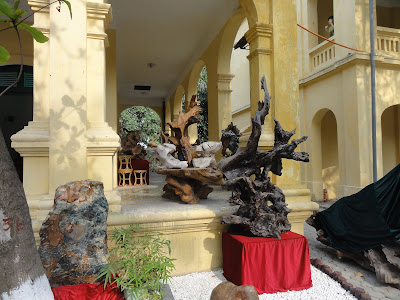 There were some fabulously contorted tree roots and onyx and marble sculptures on display and for sale, but the best part was all the relics they found during a huge archaeological dig in the 1990s 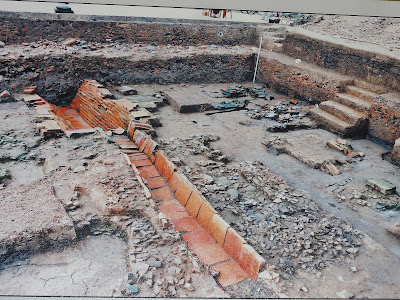 this is the drainage system put in place 1000 years ago... 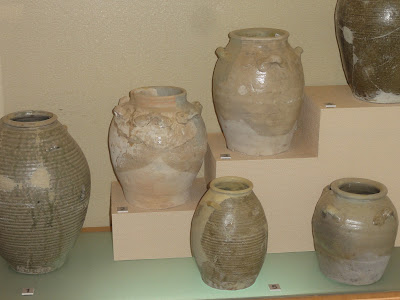 And these pots are from the 9th century!! 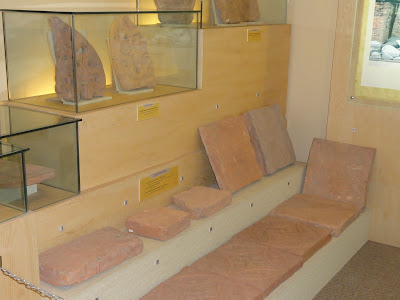 It is extroardinary to me that these thick terracotta pavers (30x30cm) were made so well 1000 years ago that they have withstood the passage of time, buried under metres of dirt, rubble and human occupation. 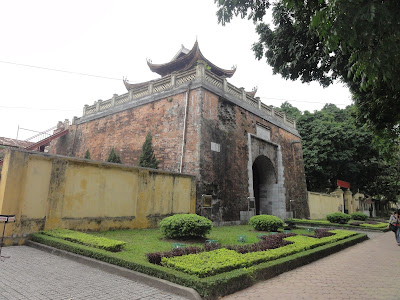 This old gate is a relic of the French colonial era, built in 1832 I think. you can see the damage left by rocket and bullet fire from the American war, but the walls are so thick, the biggest hole at the top still only got through the first 50cm. It was about 5:30pm and people were gathering on the footpaths playing badminton... young and old... 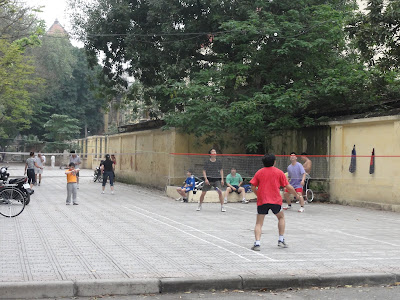 We walked to the old quarter, which is incredibly picturesque - narrow twisting streets, fabulous old buildings, trees and a huge array of street stalls and shops 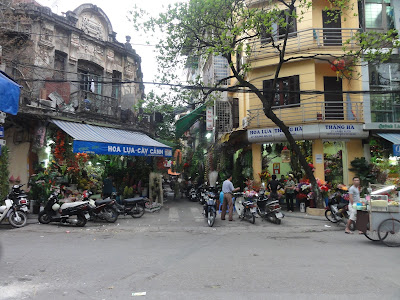 By then we were very thirsty, so we stopped and had fresh coconut juice... 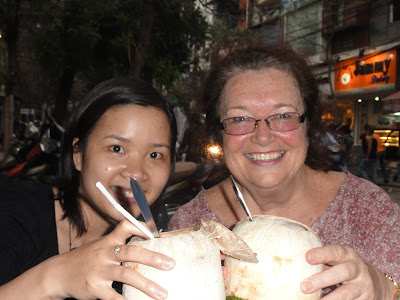 We were headed for the oldest restaurant in Vietnam - Cha Ca La Vong - owned by the same family since 1871, they only do one dish (a deep fried fish) that is so famous they named the street after it. The entrance is very old and understated: 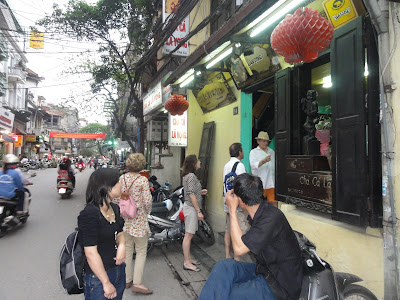 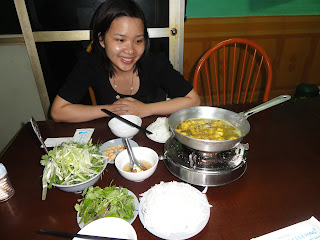 After we finished our dinner we jumped on the back of a couple of xe om (motorbike taxis) and did a mad dash through the traffic and tourists to get to the Water Puppet Theatre in just 10 minutes. This traditional art form is unique to Vietnam and came complete with a Vietnamese orchestra and singers. The several stories depicted were light-hearted and must have been a lot of fun for the villagers that first thought of it. 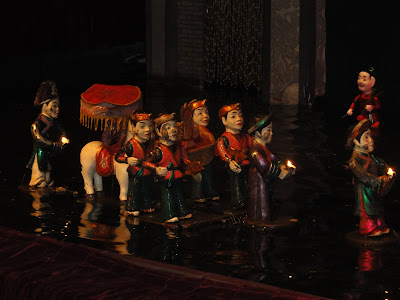 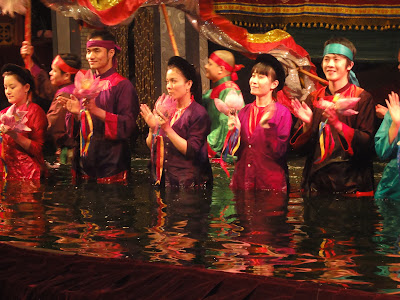 the puppeteers stand in the water.

After that we jumped on xe oms again and rode way off into the suburbs to join Lynh's friends at a youth group meeting... followed by a night in a near-by hotel. I'll blog that lot tomorrow coz I'm tired and I haven't begun to blog my visit to CAT BA ISLAND!!!