It was about 9pm when we finally got to the youth group meeting after an exciting 40 minute motor bike ride. The street frontage was a tiny little phone card shop, then we went up this steep narrow flight of stairs for four stories. On each level there were people and shoes and clothes and stuff everywhere... apparently the rooms are rented out to families and they are all crammed in. As we got to the top floor I could hear Brooke Fraser singing Hosanna! How amazing, that here in a little house church in Hanoi the youth were practicing a drama for easter to a song that we sing at home.
After they finished, we went down the road a piece and booked into a hotel for the night. It was so nice to have a shower and lie down... I had a good night's sleep but apparently my snoring kept poor Lynh awake all night... Sunday morning we walked back down for the church service. 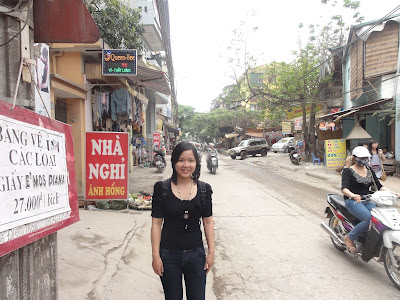 There is one big room on the top floor that is used for meetings, and about 70 people attended. Apparently the children are looked after in another room. The singing included 2 more Hillsong songs - translated and transfigured into Vietnamese, but quite recognisable none the less.  My Redeemer Lives was one of them. The 'shepherd' preached for over an hour, then they opened the floor for testimonies. More than a dozen people stood up and shared what Jesus had done in their lives that week ... healings, provision, etc. We should do more of that, it's such a vibrant reminder of the goodness of God actively moving in our lives.
They wanted us to stay for a fellowship lunch, but we were already in trouble with the time. We walked a fair way to catch a bus to the coach terminal, stopping to grab a bread roll from a street vendor on the way. 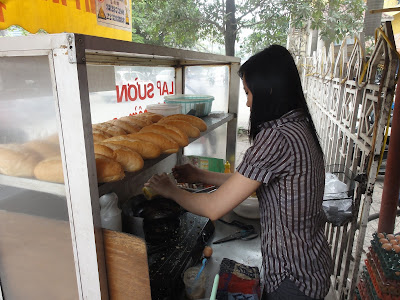 The city bus ride ended up taking nearly an hour, then the coach back to Hai Phong over 2 hours so we arrived at the scholl right on 3 o'clock when our classes were due to start (Not happy Jan!).  I had to jump on a xe om and dash home to change my clothes and grab my teaching books and got to my class 15 minutes late... Moon, one of the TA's was playing hangman with them so they were quite happy. So I had to wing it with no preparation, but it all went well and we had a good class.
This is a picture of a sticky rice cake I bought on the coach. The texture is a gluggy as it looks, but the flavour is really nice.. just a hint of ginger... 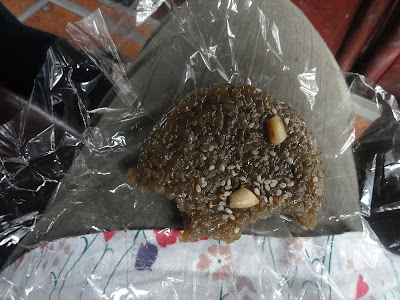 We got our rosters for next week and I was delighted to see I had Monday and Tuesday off, so I made plans to go to Cat Ba Island. Both Amie and Sarah were rostered off too, so they are coming too.