I woke up at the usual time and said good-bye to Lan, who had an early class...  but there was not sign of movement from the rest of the bunch. So I left Katie asleep and walked down to the corner to join Becki and Gene one last time for bánh cuốn for breakfast. 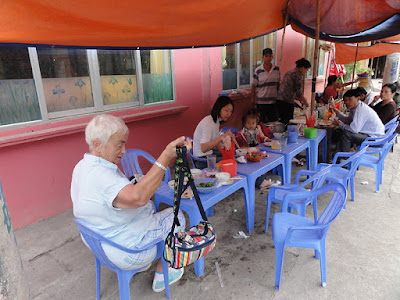 Gene came back home with me and we called a taxi so she could take the two tubs of lesson plans and other stuff I am leaving for if/when I return. She'll hang onto it for me, bless her.
By then energiser-bunny Xuan had woken up, so we walked to a bank on Van Cau so I could change some money over, but they couldn't do it. The day was heating up by the time we walked back to the house to borrow Khanh's bike so we could go and find a goldsmiths shop. There are a few on Lach Tray and I had no trouble changing dong into US dollars. The others were a pretty slow and sorry bunch waking up by the time we got back...

Lynh from VAIE came over to say good-bye. It was so nice to see her. Katie didn't end up meeting Lina or Aline... guess we'll just have to come back for that! It was pretty crazy in my room those last few hours. Besides Katie and me and our luggage, there was Khanh, Xuan, Thinh, and Linh. I used up all my Texas BarBQ vouchers and ordered a heap of take-away for lunch but none of us were really hungry. In the middle of all that, Tony came in with two of the local waitresses he's teaching English. He introduced them, told them here was a wonderful opportunity to practice and walked off! Talk about inappropriate and embarassing! Sometimes I wonder. Anyway, after a few awkward minutes of stilted conversation (during which Khanh insisted he wasn't Vietnamese, but an Aussie from Coffs Harbour...) the poor girls left us to it and went back downstairs.

Lastly, Kate from VAIE came over to inspect my room and make sure all was in order and it was time to go to the airport. My sorrow on leaving was tempered by the probability that I would be returning in a few months. So many beautiful, dear friends... all of whom played a part in shaping this wonderful adventure. How very blessed I am.

Before we knew it, it was time to go to the airport. We said good-bye to Will at the gate and Xuan and I loaded the luggage into a taxi and Khanh gave Katie one last ride on the bike. We will really miss that mode of transport... it is so much fun. Sitting at the airport in the departure lounge was the pits, but before we knew it our flight was called and it was time to say the last of our good-byes... a teary affair with promises to return. Katie and I had a fabulous trip ... we walked lot, laughed a lot, ate great food, saw fascinating places and met some wonderful people ... love Viet Nam!

We caught the 2pm flight from Hai Phong to Ho Chi Minh City with Vietnam Airlines - a comfortable 2 hour flight. Then we had a six hour wait for the flight back to Oz. We skyped Lockie and the kids with promises that we'd be home tomorrow... SO looking forward to that! But as we were waiting Andrew phoned from Brisbane to tell us there was a Qantas strike and all flights had been grounded. Even though we had booked with Qantas (good old frequent flier points) our flight to Darwin was with Jetstar, so we took off on schedule at 11pm, hoping for the best. That's the thing about flying... when you're finally on your way home after a fabulous trip there's that wonderful anticipation about being back with family and friends - being home - that ecplipses the sadness of seeing the end of the experience of a lifetime that will be cherished.