It rained heavily all night and by morning parts of our rooftop restaurant was flooded. 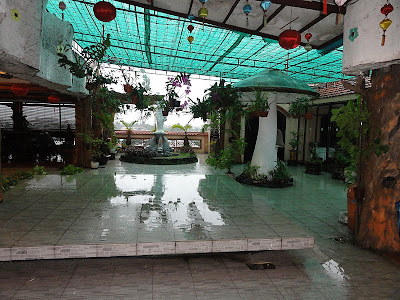 After breakfast, we headed down to reception to be assured that our tour would go ahead in spite of the rain, so we sat down to wait. An amiable young Frenchman named Julien joined us.

This is our tour guide. He had a very amusing squeaky voice, and like all tour guides, a great personality. 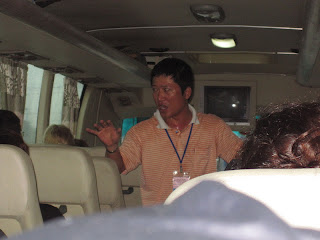 The tour was to Mỹ Sơn, a cluster of abandoned and partially ruined Hindu temples constructed between the 4th and the 14th century AD by the kings of Champa (Chiêm Thành) - an Asian civilisation which is now extinct. The temples are dedicated to the worship of the god Shiva, known under various local names, the most important of which is "Bhadresvara". The valley at Mỹ Sơn was a site of religious ceremony for kings of the ruling dynasties of Champa, as well as a burial place for Cham royalty and national heroes. At one time, it encompassed over 70 temples as well as numerous stele bearing historically important inscriptions in Sanskrit and Cham.

Two appalling occurrences in the last century have devastated Mỹ Sơn and left it in ruins. Firstly, the French took the head off every statue and wall frieze when Vietnam gained independence and ceased to be a French colony. They are probably all crated in boxes in storerooms of the Louvre... How outrageous! They should have been returned to the Vietnamese people by now. Then a large majority of the unique structures of Mỹ Sơn were destroyed by US carpet bombing during a single week of the American War.

When we got there our guide showed us a map of the site and explained where we should and shouldn't go, and how to get back to the bus. 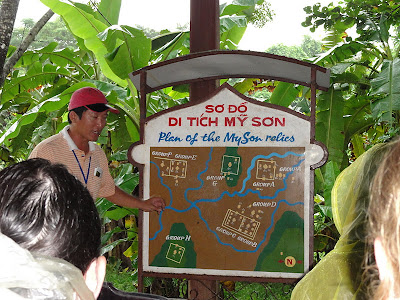 Then we joined the long line of tourists walking through the rain to the ruins. The valley was shrouded in mist, and we couldn't see the surrounding hills. (Mỹ Sơn means 'beautiful mountains') 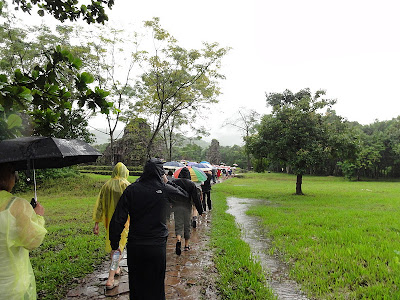 Apparently this entire site was 'lost' in the jungle until French archaeologists uncovered it at the end of the 19th century. It must have been awesome when it was intact, especially the central building which towered 70 metres tall until the US bombed it to oblivion. This is all that remains of that tower today. 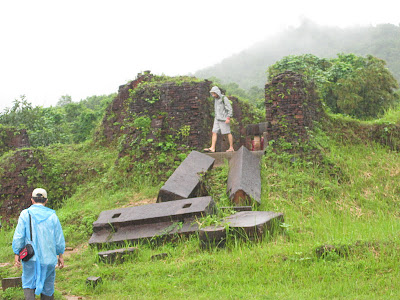 It can never be re-built, because today's scientists cannot work out how these brick buildings were constructed without mortar.

Wandering around this site with the low cloud cover and drizzling rain seemed very appropriate... 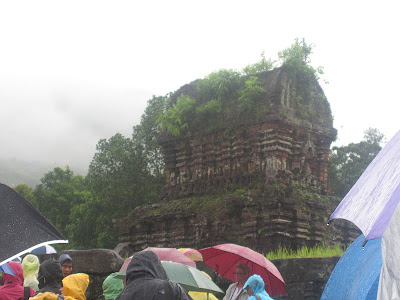 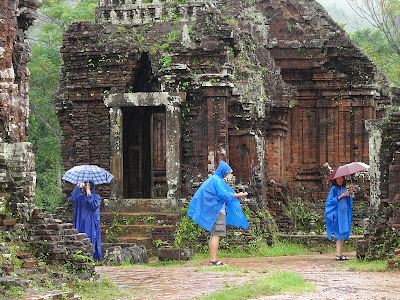 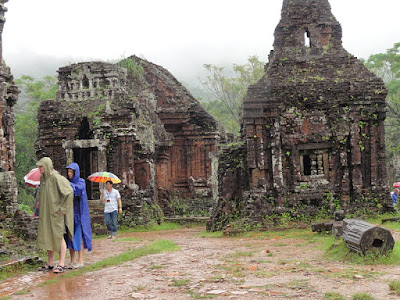 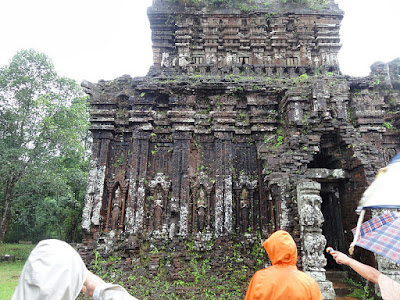 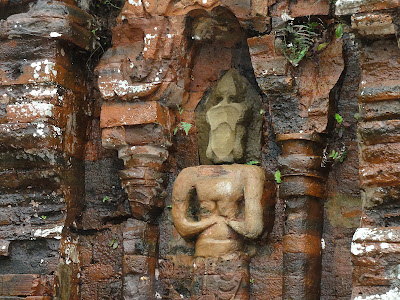 None of the heads on the figures on the wall here are original. They are rough approximations... very rough. 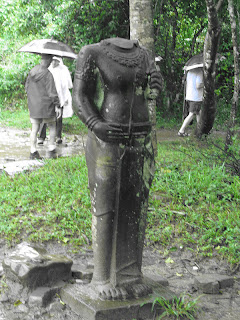 Most of the figures throughout the site remain headless... 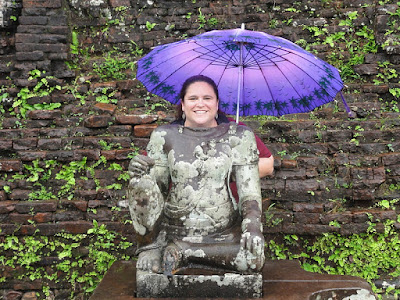 Even though it had been raining long enough to cause localised flooding, the interiors of these thousand year old structures were still dry (those that hadn't been bombed, that is). This is looking up at the ceiling. The entire buildings are constructed out of bricks... 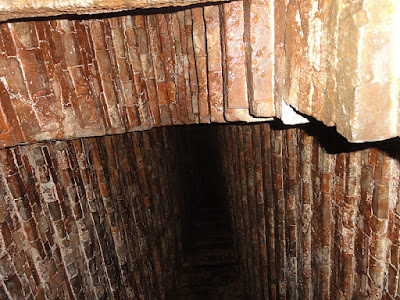 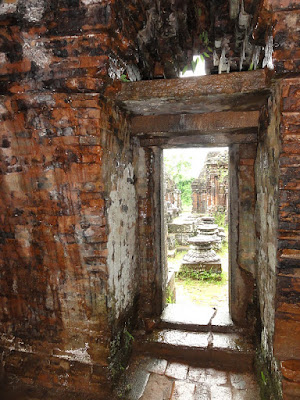 The damp floor here is from the shoes of the tourists 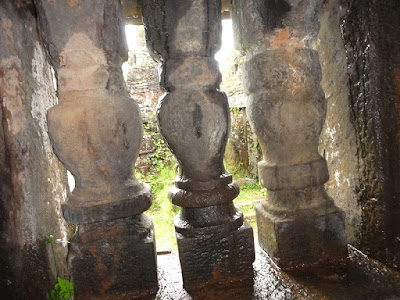 an ancient window still lets in the rain, too. 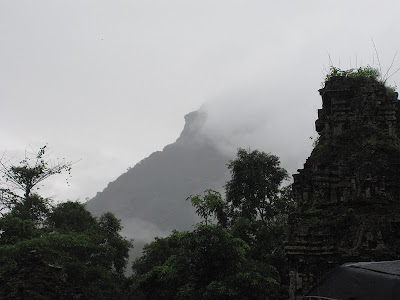 The cloud cover parted momentarily and we caught a glimpse of the mountains. 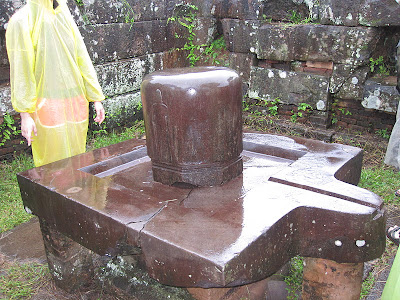 This is a Linga-Yoni which is synonymous with Yin and Yang and represents the male (Linga) and the female (Yoni). Apparently in the ancient ceremonies, they poured coconut milk (white) over the Linga until it ran off the Yoni down that channel. It's all very phallic, even the mountains represent Linga and the valley represents Yoni. 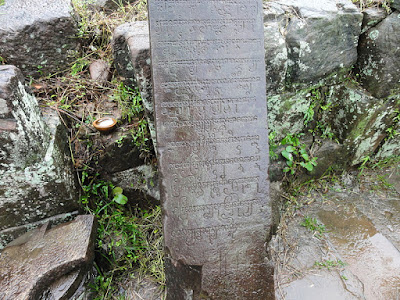 The inscription on this stele has yet to be translated. Scholars have no idea what language it is, or what it says 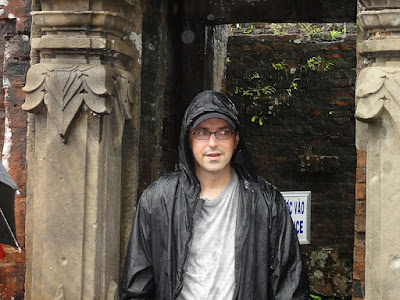 This is Julien. He is travelling around the world on his own as a post graduation treat, before taking up a post as a physiotherapist working with disabled children. The amazing part of his story is that he was an engineer but developed brain cancer. He survived the surgery and subsequent treatment, but it left him blind in one eye and with only partial sight in the other. No longer able to see well enough to keep on practicing engineering, he went back to university and re-trained as a physiotherapist. Watching him trying to read by holding the paper 2" from his good eye, it's a wonder that he managed to complete another uni degree. He needed assistance to get around over rough ground, so Katie stayed by his side for the duration of the tour, and he was great company.
But it probably wasn't our smartest move to ask him to take our picture... 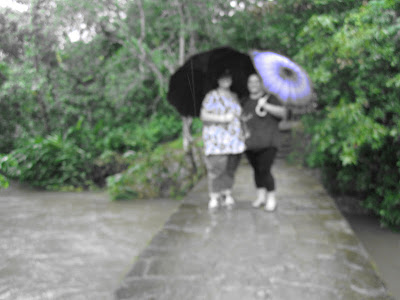 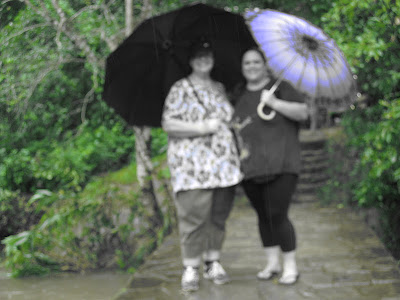 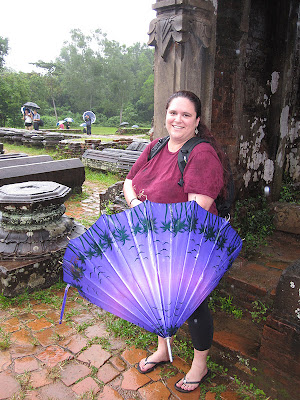 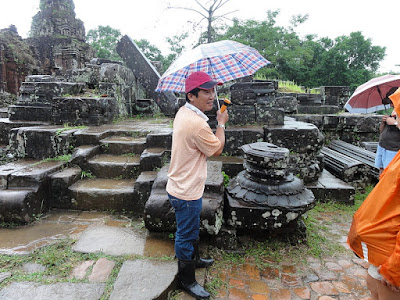 That will be an enormous task and it can be dangerous... they still find unexploded bombs around the site periphery 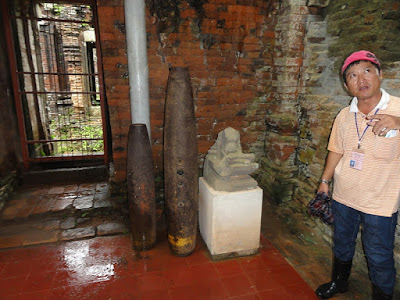 And check this out... the bricks covered in moss are part of the restoration completed 25 years ago... the pristine orange coloured bricks are the originals (over 1,000 years old!) 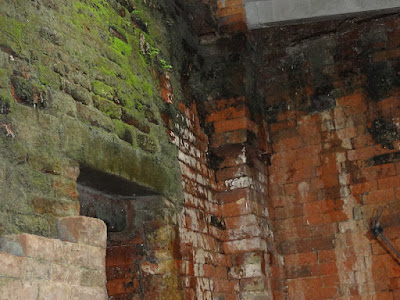 The rain set in as we slushed along the long path back to the tour bus. We were supposed to get on a boat for lunch and a visit to a carpentry village along the way back to Hoi An, but the river was rising and with the wind and rain it would have been unpleasant as well as dangerous, so instead of getting back at 4.30pm we were dropped off in the middle of town at lunch time.

Julien stayed with us as we found our way back to The Bees Knees and we enjoyed a fabulous lunch, eventually making it back to the Hotel around 4pm. It had stopped raining by then but it wasn't nice weather for swimming, so I resigned myself to the fact that even though we were staying at a hotel with a swimming pool, I wouldn't be using it.

We heard children's voices, and Katie stepped out onto our little verandah and spotted these littlies playing in the yard next door

We repacked our bags to accommodate the clothes and lanterns we'd bought (Probably just as well we didn't get any shoes made too!), then watched Mao's Last Dancer on TV. The rain began again in earnest, so we decided to have dinner upstairs in the restaurant. We were the only diners, and there were five waiters lounging around waiting for someone to serve... I find it uncomfortable trying to eat while someone is watching... Katie had duck for the third time in two days... moist and delicious... 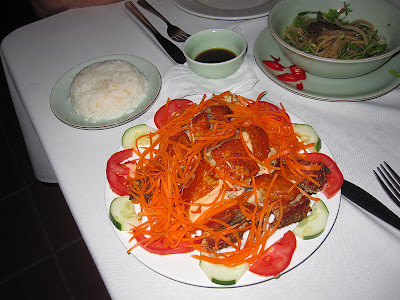 The heavy rain continued all night and there was some concern about flooding if the river kept on rising... we would get stranded in Hoi An...