It's hard to believe that tomorrow we fly home. I was keen to take the Church class at this, my last opportunity, so Khanh came around early and we went to Nam Phat church. Will came too. It was lovely to join the students one last time. Meeting them has added a new dimension to my Hai Phong experience. When we got to the discussion groups Katie and Will joined in as well, so there were three 'teachers'. At the end of the class, Net presented me with a beautiful marble display plate with Ho Chi Minh's portrait. Uncle Ho is esteemed as the father of the nation and is held in the highest regard. 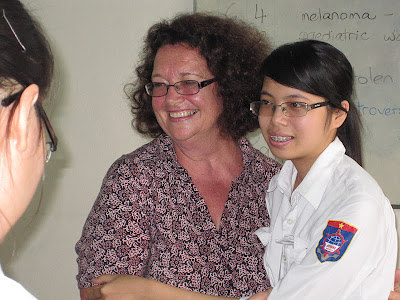 As I said good-bye to yet another group for dear friends I realised how much I want to return in 2012 and pick up where I've left off.

For lunch we took Katie to the fabulous BunCha restaurant on the corner and she was as blown away as I was when Khanh and Xuan took me there the first time. 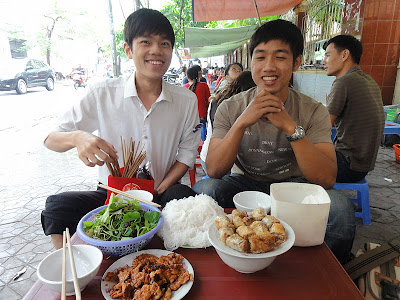 There was no more putting it off - I had to finish my packing. So I stayed home to get stuck into it uninterrupted while Khanh took Katie to see the Hang Kenh Communal House. 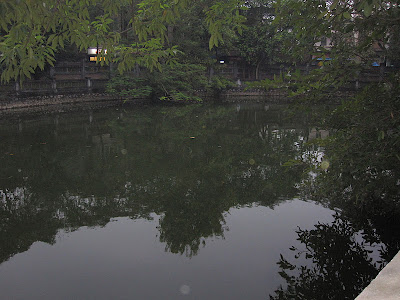 When you come to the compound, there is a large ornamental pool directly in front of the House.
Then there's a gate 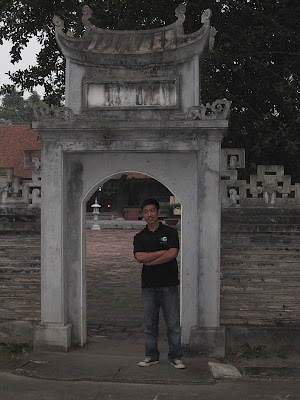 and the communal house 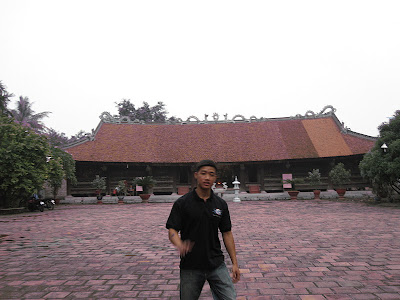 which has a large open area in front of it.
Every year from the 16th to 18th of the second lunar month, ritual ceremonies, festivals, traditional games and performances of cheo tuong and other folk songs are held here, attracting large crowds.
People were inside worshipping, so Katie didn't take any photos of the interior and the valuable wooden sculptures. 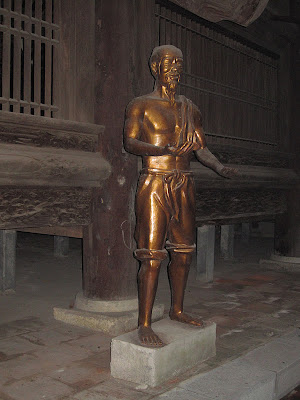 This is the national hero,General Ngo Quyen, who vanquished the Chinese invaders and founded the first National Dynasty in the 10th Century. He is depicted as a humble man, dressed like a simple worker with a beautiful face. 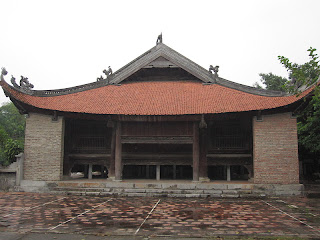 Next to the communal house, it is the temple of literature of An Duong rural district with steles bearing the engraved names of feudal bachelors and doctors of former An Duong district. 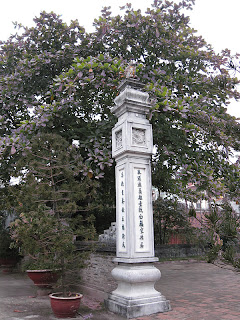 Then they went to the Du Hang Pagoda, built in 1672... Katie enjoyed the happy Buddah statues. 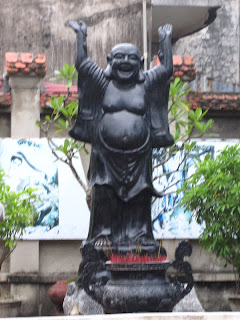 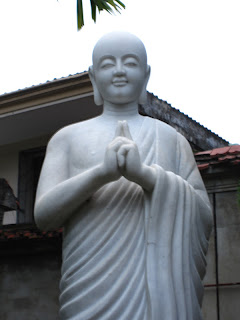 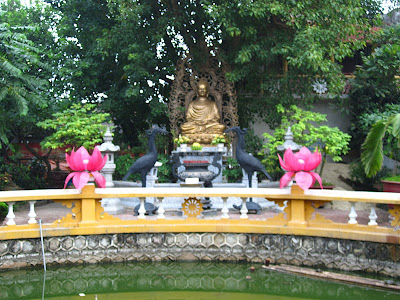 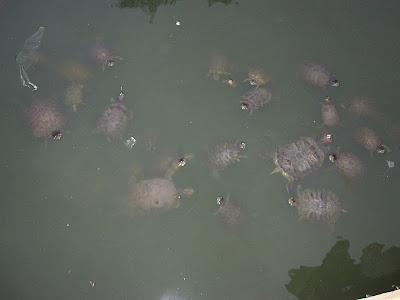 Lots of turtles in the pond. 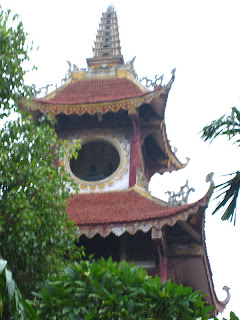 Ornate detail on the roof of the pagoda...

I was all done packing by the time Khanh brought Katie back. She ducked out with Will and Xuan to the local bottle-o to get in supplies for later in the evening - beer and vodka. No-one wanted to waste a minute of Katie's last night in Hai Phong!

For our last night we took our dear friends to dinner at Seamen. Will was working till 9:30 so it was pretty late when we got there, so there wasn't the same array of food on offer as the other times I'd been there, but it was good enough. None of the others had been there before, so it was a real treat. 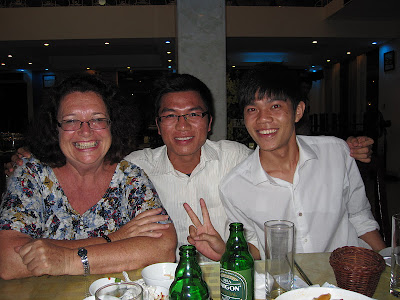 with Tinh and Xuan 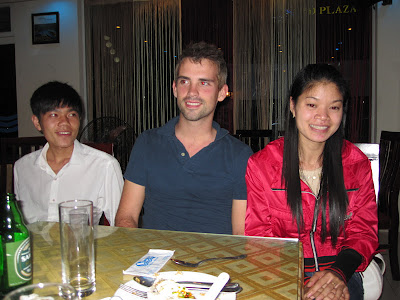 Xuan, Will and Lan 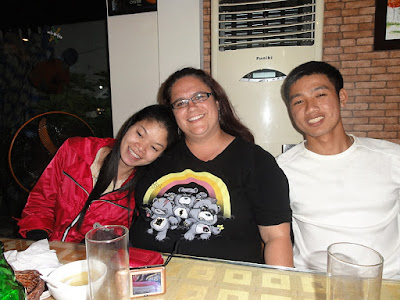 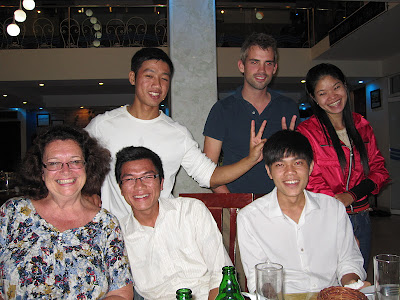 We were having too much fun to remember to take many photos. It's been like that since we got back... so there aren't any photos of the fabulous food this time... best we could manage was this sad rendition of a plate of scallops... 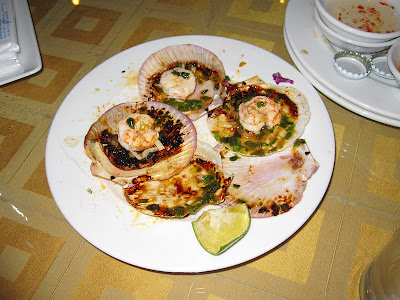 The whole concept of a buffet where you could go back and get another plateful as often as you wanted was a novelty. When I explained it to the others they tucked in with gusto. It's amazing how much food people can eat... especially when it's so delicious.

We were all full when we toddled off to find a karaoke bar for another session. 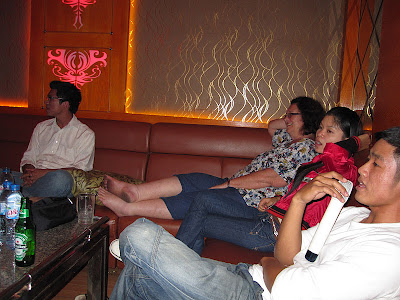 We reckon there's nothing Khanh can't do ... he even has a fabulous voice...
Maybe next time I'll try to learn some Vietnamese songs as a way of acquiring some language... Daunting as the prospect is, I would love to learn more than just a few numbers in Vietnamese when I return.

Lan and I crashed when we got home, but Katie and the boys played darts and partied on well into the night... our last night in Vietnam... (for now)