There was such a severe storm forecast for today that all the schools in Hai Phong were closed... First up, I had a call from Net cancelling the morning church class as the rain and wind began. Khanh and Xuan turned up at 8:15am anyway, so they came in and we chatted to Katie on skype while I ate my breakfast.. 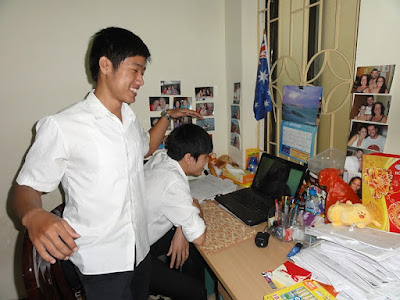 .. until we had a blackout. I got a call from Lynh to say that VAIE had decided to cancel the evening's classes as well, and would be closing the office before lunch. So Khanh and I donned rain capes and headed out into the rain so I could finish cleaning out my locker and pick up my final pay packet. Most shops and businesses were closed and there wasn't much traffic about. Many trees had been lopped where branches were overhanging power-lines. Only a few hardy market stall-holders were still braving the elements. Khanh said they sell out of stock very quickly when there's a storm warning as people hurry to stock up.
We decided to invite ourselves over to Gene and Becki's since we all had the day off. I asked Khanh if he knew where they lived and he said he did (not realising that they had moved recently). So he gave Xuan directions and Xuan headed off into the rain on his bicycle while I locked the gate. When we got to the street at the end of our lane, we began heading in the wrong direction and I realised Khanh thought they still lived out next to the International School! By the time we caught up to Xuan he was half way across the bridge... Khanh shouted at him and we chucked a U-ey right in the middle of the bridge and headed back in the right direction... wind blowing, pouring rain, puddles deepening. We passed a telegraph pole sagging on its wires completely broken off at the base - obviously the source of the blackout - with a crew of men working to fix it in the rain.
Gene and Becki live in an out-of-the-way place down a convoluted twist of streets and laneways that is very difficult to find and I hadn't checked the directions because I thought Khanh knew the way... Needless to say, we got totally lost. Xuan was trailing behind on his bike and he quickly worked out that it was wise to wait at each corner to see if we were going to turn around and come back it happened so often! After about 10 minutes we decided we should just head for home when I recognised where we were, so we turned around and had another go... and came to another dead end. This time I phoned Gene and she was telling me directions as we finally got on track - almost. We stopped for the umpteenth time, lost again. I was still talking to Gene on the phone and she told me to look behind me - and there she was 2 streets over waving from her doorstep (there are only a few houses in her neighbourhood). We still overshot the turnoff, but Xuan stopped there and waited for us to turn around. Again.
We were very wet and muddy when we bundled into the house, bikes and all. Gene took me upstairs and lent me a dry pair of pants, but the boys just toughed it out without complaint. The wind was rattling the door and we could hear the rain but it was very pleasant sitting around the table in their kitchen. We decided to order home delivery from Texas BarBQ and had a feast of ribs, burritos and pizza for lunch 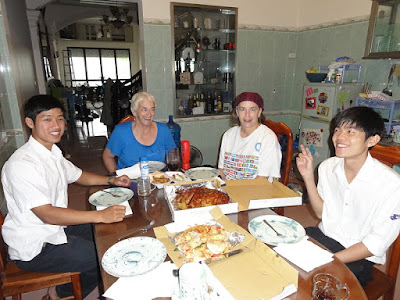 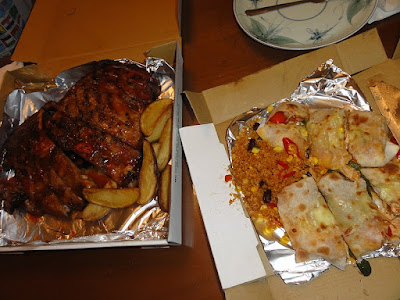 After lunch we left the girls to enjoy a lazy wet afternoon and headed out into the storm to come home. We only got a little bit lost getting out to the street and came home to find the blackout over. Again the bikes came inside (here there is a curious custom of leaving shoes at the door but bringing bikes and cars right into the living room - hmmmm) and the boys and I played darts - enthusiastically, if not very well. 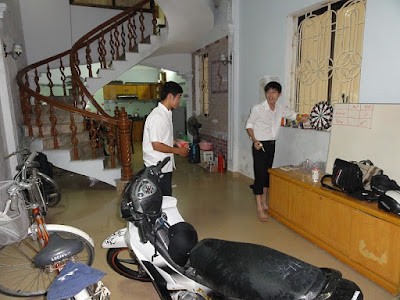 Being highy competitive as young men are, the losers had to do ten push-ups (them) or sing a song (me)... and we all took a turn at the penalty several times over. 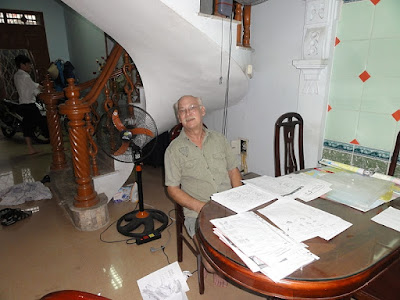 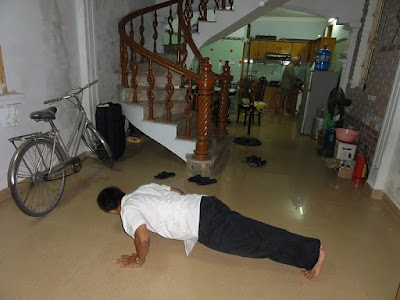 We watched TV for a while and by 5:30pm it wasn't even raining much. This has happened three times since I've been here - severe storm warning, the city closes down, classes are cancelled and by nightfall it's just a quiet peaceful evening... not windy, a bit of sprinkling rain. Apparently last year there were such violent storms lives were lost, so nobody takes any chances.

Then Katie called and I got to talk to Greg and Gemma on skype and see little Caelyn. I took these photos as we were talking. Isn't technology amazing? 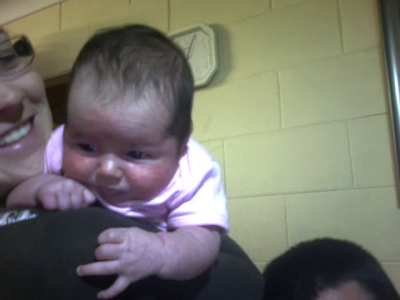 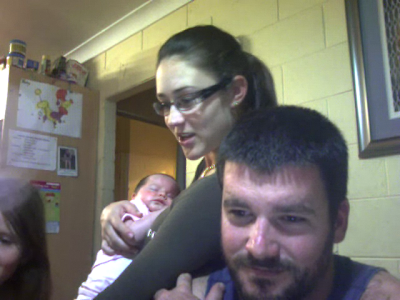 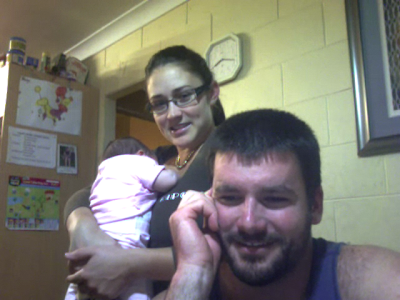 In four weeks and three days I will get to cuddle my family.

Khanh and Xuan and I decided to head out and see what was open for dinner since I was celebrating the end of my contract. We rode around the block (with a detour to avoid flooded roads) and eventually ended up in the twelfth floor restaurant at H Tower for a lovely dinner. 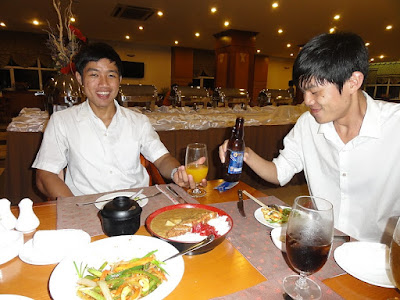 And so ended my delightful day... quite different from what I expected for my last day of work in Viet Nam!  God bless Khanh and Xuan!