Today we opted for the Cuc Phuong National Park and this time we headed off in the hotelier's 4WD. It was a scenic drive to get there and I tried taking photos out the window, but with limited success.. 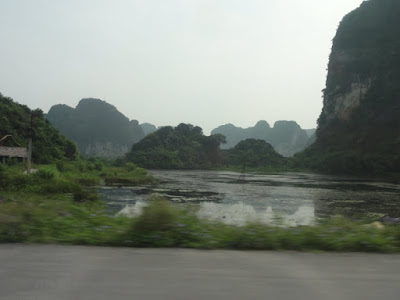 I particularly wanted to photogragh the buildings for they are quite unlike anything we have in Australia. Most didn't have windows, but heavy timber shutters, nearly all were rendered brick construction and being set in the midst of rice paddies or on steep hillsides they were built on raised mounds to avoid flooding. Each one is unique and appears to be very simple, but functional. 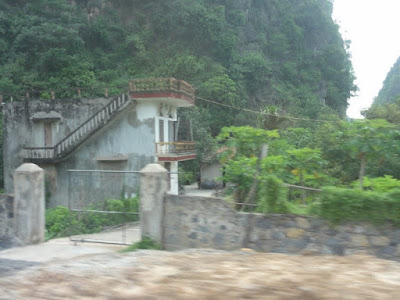 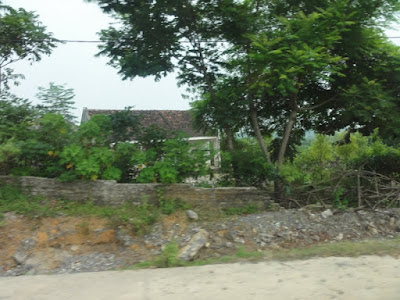 I'm afraid my reflexes just aren't quick enough to spot a shot from the back seat and take it before we go past...  can you see the little house tucked off on the right in this next pic? 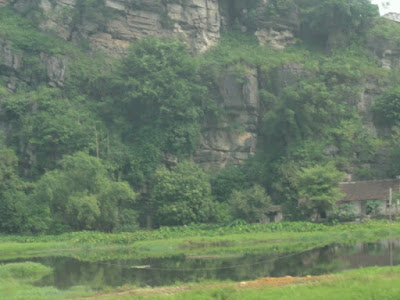 this one I didn't take...it's off the net

But this is what it's like trying to get a photo of buffalo... they won't stand still! 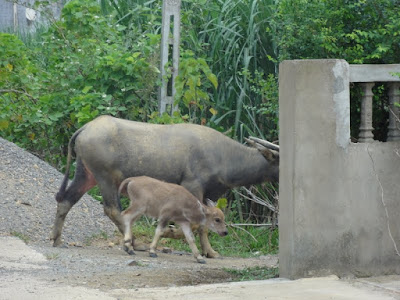 Anyhow, we headed up into the mountain range and as we drove through the rainforest it was so much like Bruxner Park I was amazed... very similar vegetation but without the whip bird calls. Our main objective was the Endangered Primates Centre and it was great. 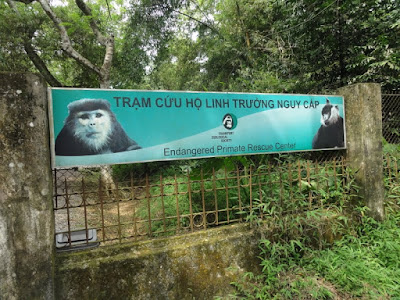 The Endangered Primate Rescue Center (EPRC), located at , southwest of , is a non-profit organization dedicated to the rehabilitation, breeding, research, and conservation of endangered primates, and to the protection of their habitats.  Other than the captively bred primates, all of the animals at the EPRC are victims of poaching and the illegal animal trade. The animals are confiscated in cooperation with ’s forest protection authorities all over the country. Staff members often have to travel 1000 to 2000 km to pick up confiscated primates in remote areas in central or south Vietnam. 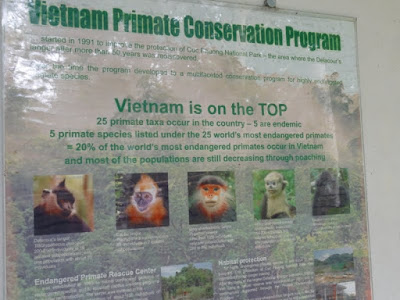 Today the EPRC is home to more than 140 primates, including six species which are kept only at the EPRC and in no other facility in the world. These include the “Critically Endangered” grey-shanked douc langur 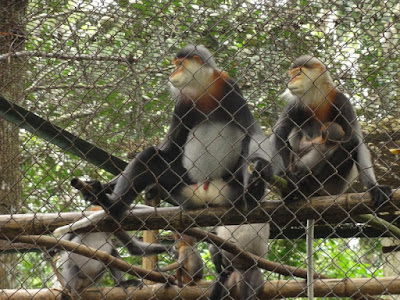 I think the guide said there are only 40 of these langurs left in the wild.
Douc langurs are large leaf-eating monkeys found only in Vietnam, Laos and Cambodia. Active during the day, douc langurs predominantly eat leaves and can become extremely ill if they ingest other types of food, such as sweet or sour fruits. Douc langurs spend most of their time in the trees. 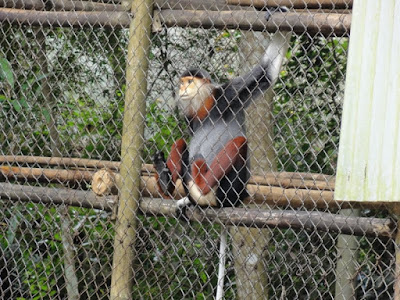 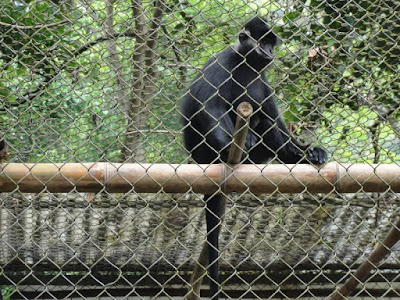 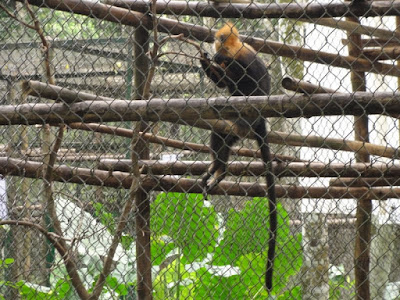 This one is the golden-headed langur and it's only found on Cat Ba Island, but it's critically endangered 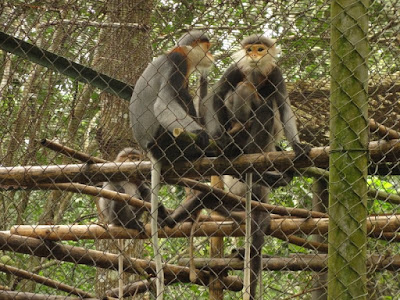 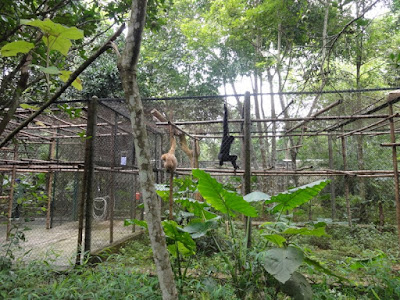 Gibbons
Active during the day, gibbons are very vocal apes. They are known for their "singing" which can usually be heard in the early mornings over a long distance. Gibbons have no tail and very long arms and move by swinging on branches. They rarely come down to the ground, preferring life in the trees. Gibbons feed mainly on fruit, flowers, and shoots, but also insects, bird eggs and young birds, found in tree nests. The females are light brown, the males black. 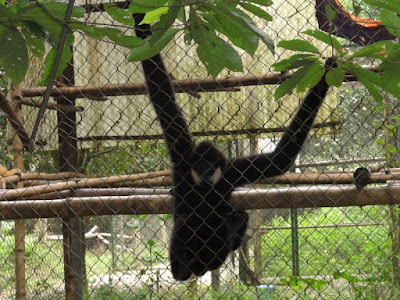 
Given that they are in captivity, they all look to be having fun! 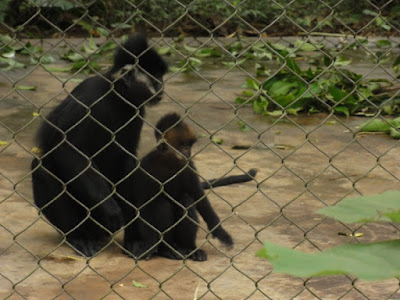 The EPRC was established in 1993, following the confiscation of “Critically Endangered” and “Endangered” primates. Since then, the center has been managed under the supervision of Frankfurt Zoological Society. 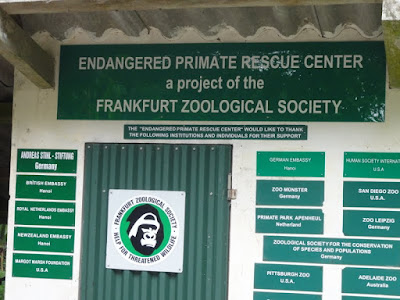 While most of the people working here are locals, we did see one keeper who looked like he's probably German.. 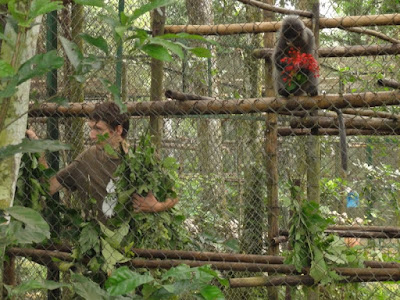 The final goal of the EPRC is the establishment of stable populations of highly endangered primate species in captivity as a source for further reintroduction programs.
With the establishment of semi-wild enclosures the center has taken first steps towards reintroducing the primates to their natural habitat. Langurs and gibbons have been released into such areas and have been successfully maintained there for several years. Although our guide told us that occasionally they release an animal into that area and it just keeps coming back to the fence for food... so those ones they bring back inside.

There's also an endangered turtles exhibit and we took alook through it..

Yeah, I know... I find it pretty hard to get excited about turtles, too

We went on up to the Ranger's station in the middle of the park for lunch but I seem to have missed taking photos there... except for some tree photos... 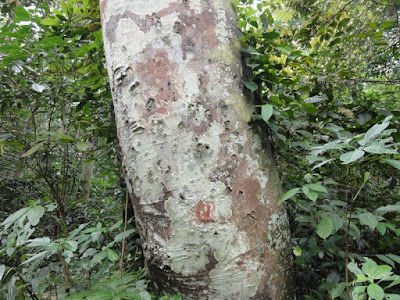 and these VERY unusual butterflies... 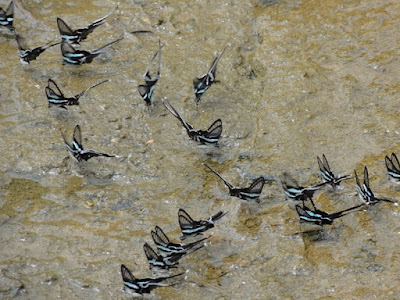 We decided not to do either of the long trecks to see a bat cave and a 1,000 year old tree  and headed back into Ninh Binh. Gene and Becki were keen to check out the big supermarket on the way back to see if they could find anything recognisable that isn't available here in Hai Phong... they found candy and crackers. And we bought some bread and cheese and fruit and drinks and that was our dinner.

We got back to the Hotel around 4pm and sat outside enjoying a cold drink and watching the local kids play on the street. Before long they had gathered around Gene, even though they didn't speak English.

After a while the children all went home for tea, and we went upstairs to put our feet up and 5 minutes later the hotelier's wife knocked on the door holding Gene's basket... she had left it at the table wide open... wallet, passport etc were all still there, praise God!

Becki had booked an early bus ride for Gene and I to go back for classes on Sunday morning, but we found out that it was en route from Ho Chi Minh City, so there would be no guarantee that it would leave Ninh Binh on schedule, so we arranged to drive home for $55 each and the hotelier and his wife drove us home at 5.30am on Sunday morning. We got home at 8am, in plenty of time for the 9.30am classes. It would have been great to have another day or two ... there is so much more to see ... next time...
Posted by Annie Gooch at 3:34 PM