Tonight there was a concert to celebrate the Mid Autumn Festival at VAIE... the theme was VAIE Idols and several children performed as finalists in the competition. There was much excitement as the stage was set up under a big marquee in the carpark... the work continued all day in spite of the rain. By 5 o'clock the children were putting on costumes and make-up ready for a 7pm start. 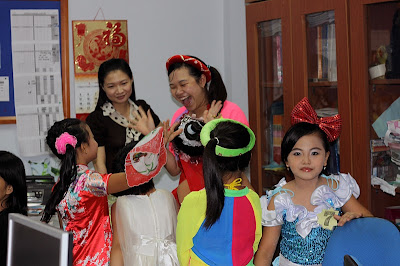 It was all very exciting! 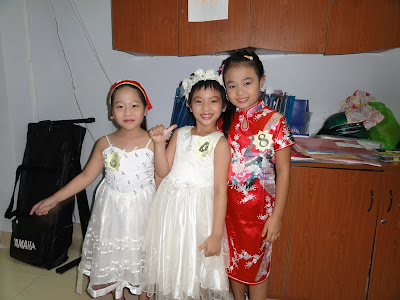 These gorgeous girls are Mary, Simba and Mimi... all of whom I teach. 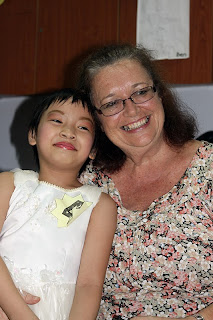 Simba is a little sweetie 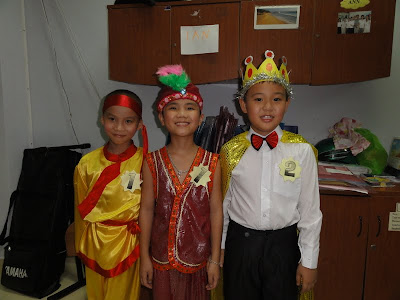 I don't teach these boys, so I don't know their names... 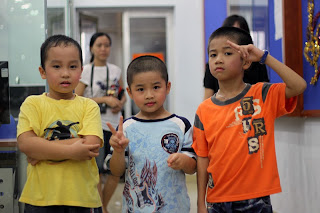 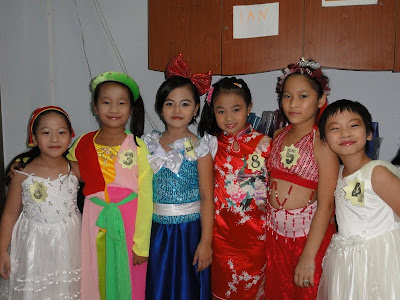 All the girl finalists... 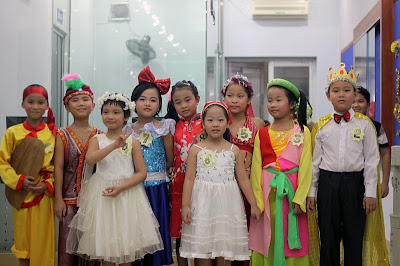 And here they all are together 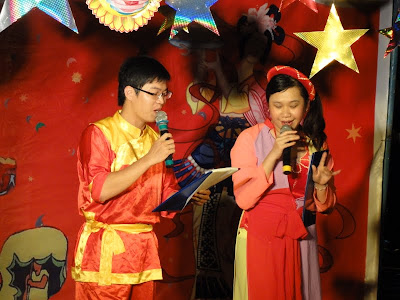 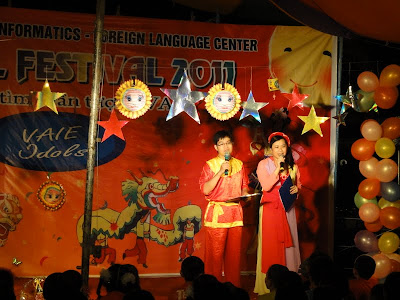 We all sat up the back at the judges table 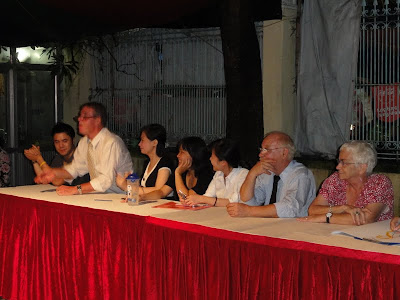 Tommy, Ian, Lina, Lynh, ? , Tony and Gene.
Tommy is a new teacher. He's American. His parents are Vietnamese.. they migrated to the US 30 years ago. All the young girls are swooning...﻿

The show began with a martial arts demonstration ... Pretty much like a kid's demo anywhere, eh? 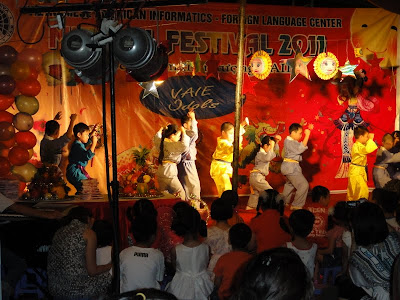 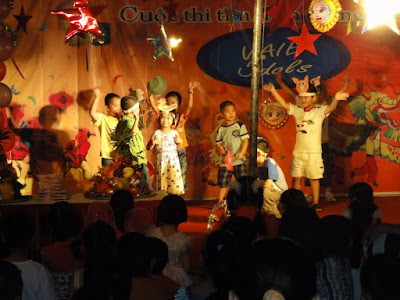 How cute are these kids from Frank's class?

They even got that foreign teacher up to lead If you're happy and you know it.. 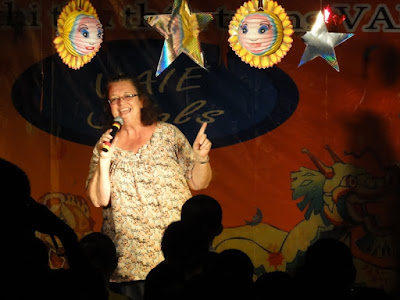 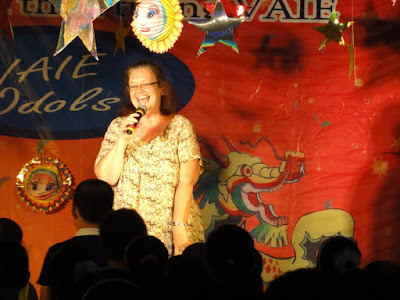 Tony came up to join me for an enthusiastic rendition of the ...shout Hurray!  verse...   (that's about as enthusiastic Tony gets) 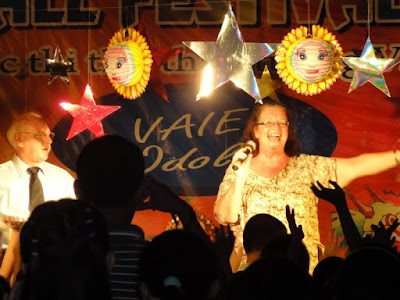 The local  break dance team had a go


Then the 'idol' contestants came on 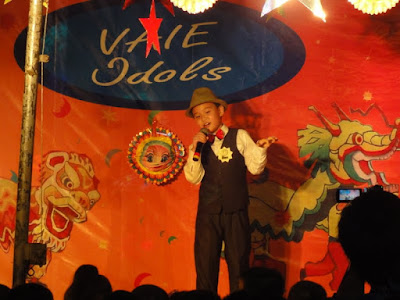 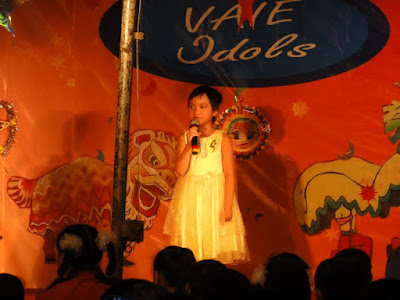 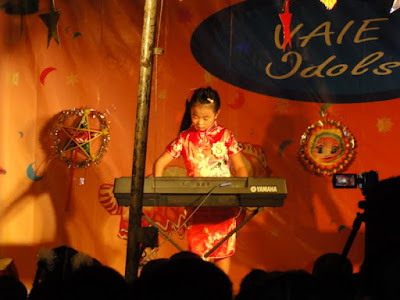 This is Mimi. She's 9. She's smaller than others in the class. When I saw her proud grandfather carrying her keyboard I understood why... he is less than 5' tall... no bigger than Mimi!

Then while the judges deliberated, the dragon dancers came on... 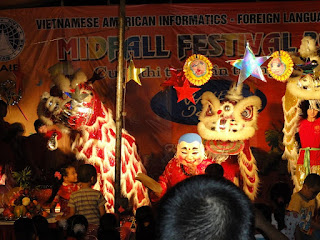 fabulous costumes... the guy with the big head is like a clown - bringing good luck and prosperity

The dragon dancers are very athletic.. and did an amazing job considering the stage was made of large 'pallets' with chipboard that was in various stages of decay. Since it was covered by a red carpet, it was hard to tell where the soft spots were... Not surprisingly, there were a coulpe of ankle breaker holes by the end of the night - but hey! no-one got hurt, so it was all good!

Finally the prizes were given out and Mimi was announced the winner. A popular winner, too. Earlier in the night I had seen a couple of boys from her class and asked them if they were performing. They shook their heads and said No!  No! Not me!... but Mimi is!...  obviously very proud of their classmate. 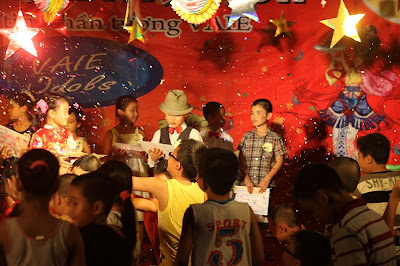 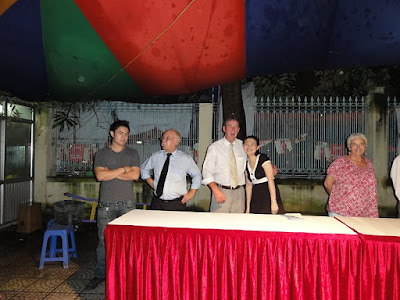 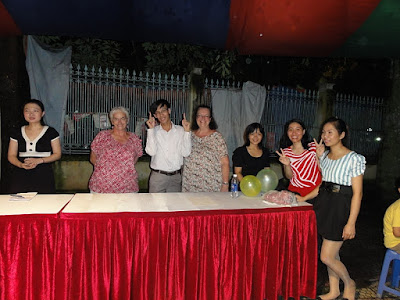 Lina, Gene, Frank, me, Linh, Ann and one of our receptionists 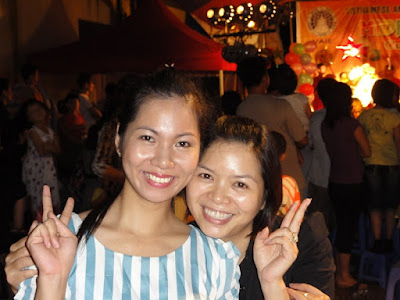 Did I mention already that our receptionists are all beautiful?? 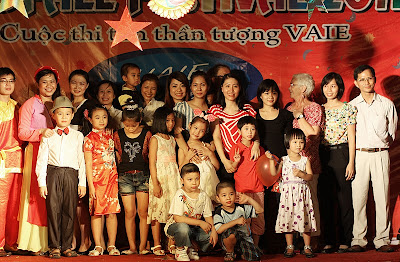 Random group photo ... who are those two old girls not paying attention? 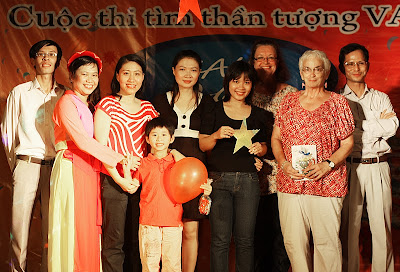 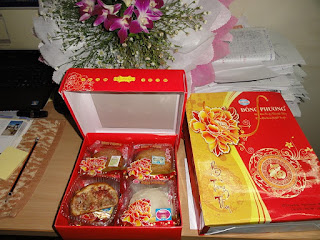 And these are mooncakes, which are given to celebrate this Midfall Festival. They're quite unlike anything I've ever eaten, especially the white ones which are made of sweet sticky rice (very sticky) and have either an egg (salty) or dried fruit and things inside them. The brown ones are a little more like cake/pastry around a variety of filings. If you look closely at the one on the bottom left, you'll see what they look like inside.

So the rain held off and we all had a great time watching the children have a great time. Hats off to all the staff and teachers who did all the hard work pulling it together.
Posted by Annie Gooch at 3:36 PM