Missed the train twice in one day!

Tuesday was my day off, so Khánh and I decided to go to Hà Nội for the day. In order to take his bike, we opted for the 6am train, so it was an eary start! ... well that was the plan ... except we got to the station at 6, too late to board the train. Probably just as well, because when we got there Khánh realised he had forgotten his wallet! So he dropped me back home and went off to get it and returned a little while later with the yummiest breakfast: 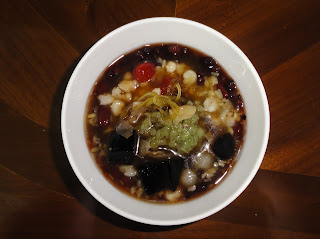 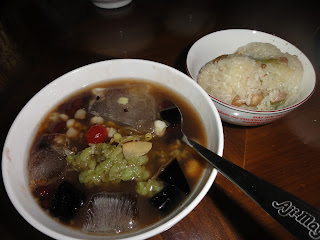 So an hour or so later we headed off once again for the station at a much more leisurely pace and caught the 9am train instead.  The rice harvest is beginning, so I took a few rough photos as the train rocked by... 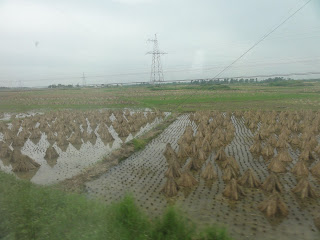 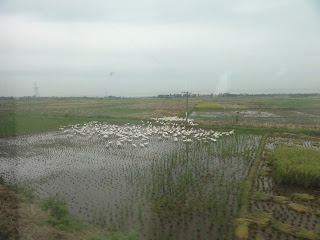 It's hard to get a decent photo through the grubby window of a moving train, but you get the idea. Speaking of photos, for the rest of the day we were busy doing stuff and I didn't get around to taking any more till the evening when we finally slowed down!

The train arrived in Hà Nội a bit after 11am so we rode to the old quarter and found a shop that Gene and Becki recommended, with clothes at Vietnamese prices with Western sizes called Curves on Hang Trong St. I went crazy and bought two new tops, two scarves and some jewellery and dropped 2.000.000 dong ... typical Westerner! Then we took a walk down the street and found another gorgeous shop where I bought a couple of unique bags and some trinkets for the kids ... and that was enough extravagance for me. I don't shop very often, so it's a buzz when I do.  It was time for lunch and Khánh had even less of an idea about places to eat around there than I do, so we ended up at Marilyn's (the restaurant I went to with Helle and the girls last time I was in Hà Nội) near the cathedral for lunch. It was pleasant, but nothing spectacular.

At 2pm we went looking for a place where Khánh could enquire about language requirements for studying in Germany next year. The lady was very helpful explaining the various options. It turns out he can use IELTS English to satisfy the language requirements as well as language tests in German. After that we rode for an hour and a half to get to a University miles away to talk to a teacher who is fluent in German who was recommended to Khánh by a friend. He was very helpful - interrupting his class to stop and chat to Khánh. They began speaking in Vietnamese, then switched to German and after a bit Khánh said in English "I don't know how to translate Hà Nội Maritime University into German" without realising he'd switched to the wrong language! The teacher was suitably surprised to hear that Khánh speaks English so well and he too confirmed that Khánh will be able to used his English to get into University in Germany.

By then it was after 4.30pm and we had a very long ride back through peak hour traffic to get to the station if we were going to catch the 6pm train home. I must admit I was VERY thirsty by then, and after hours of sitting on the bike my bum was sore! We didn't want to stop for a drink and a rest while there was even a small possibility of catching that train, so we pressed on. At every set of traffic lights we dropped our feet onto the road to try and take the load off and stretch a bit. Khánh was using his blackberry for directions because our maps only covered the tourist end of the city. In a city where most people are on motorbikes it's easy to ride up beside someone and ask for directions and we did that quite often! But when we got back near the lake, I was navigating from a small map in my Lonely Planet book, so we knew exactly where we were. We had to stop to siphon off petrol before we got to the station so I bought a couple of kebabs while Khánh was doing that, then continued the rush to the station. I think Khánh is the eternal optimist, for we arrived ten minutes after the train had left. No worries ... we just had to go and find a hotel and stay in Hà Nội overnight ... cool!

We found a park to finally get off the bike and stretch our legs and eat our kebabs and that's when I realised I hadn't taken any photos all day, so we took a few then... 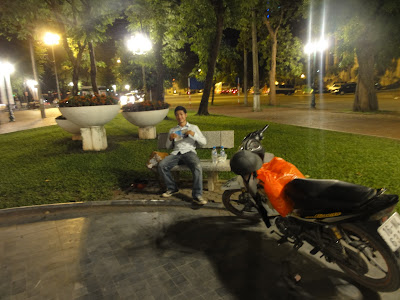 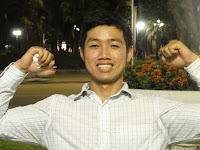 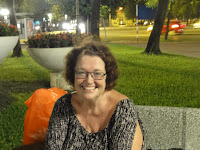 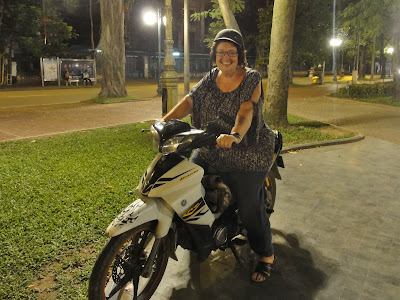 Lately I've been considering getting a bike so I can get around more easily without having to depend on others, but I am still weighing up the pros and cons. What do you reckon ... Jennifer or Clarice?

By then it was after 7pm so we made our way to Câu Gố Street and the Thang Long Hotel where I stayed last year. The rooms are very small, but clean and only $14 a night and it's right in near the lake in the thick of things. 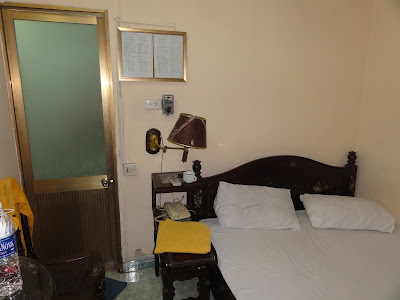 So after checking in and dropping off my shopping we went straight back out and went to watch the flag lowering ceremony at Hồ Chí  Minh's Mausoleum - a popular event that happens every night at 9pm. I was amazed at how many people had gathered to watch... many families. This photo is blurry because I didn't use a flash, but you get the idea 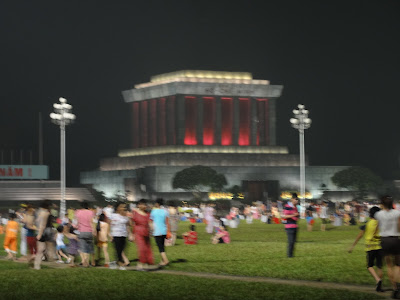 Soon after we got there whistles blew, and they cleared the parade ground. We all lined up as they changed the guard in front of the mausoleum, then a company of soldiers appeared in a fine display of precision marching. 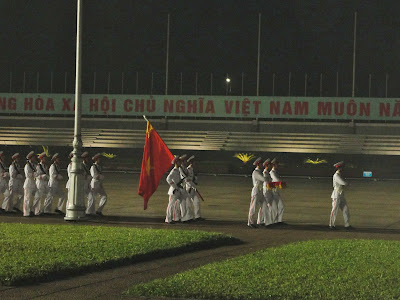 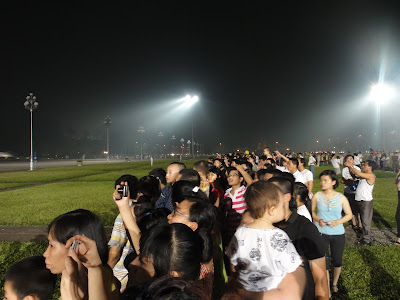 The people here are extremely patriotic and very proud to see such displays of military discipline. They were spread out along the path straining for a good look (You're not allowed to walk on the grass) 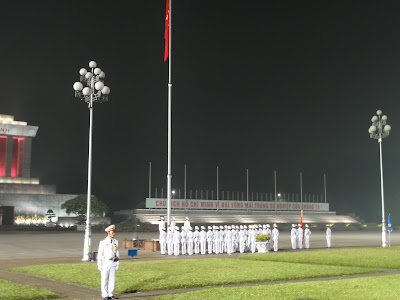 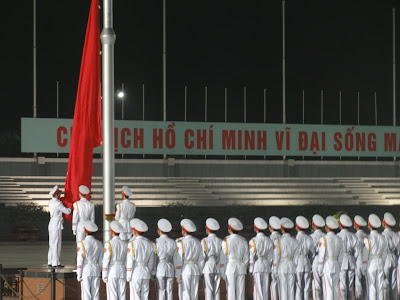 Every morning and every night these soldiers parade to raise and lower their flag and there are always many people here to watch with pride and respect. 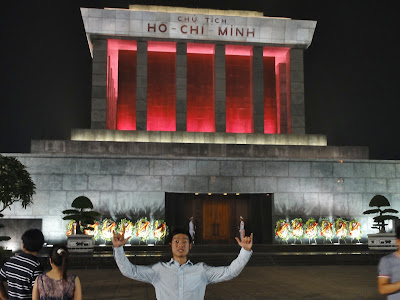 The Mausoleum was designed in Russia and is intended to represent a lotus blossom - the symbol of Vietnam, hence the gorgeous pink lighting. Everything here is clean and spotless and very impressive.

After that, we rode around to the post office to meet Dũng (pronounced Zoum), a friend of Khánh's who is managing the Green Gecko Restaurant  on Ma May Street. We followed him there and what a pleasant surprise it turned out to be! The entrance to the restaurant is tiny and you have to walk up a steep narrow flight of stairs, for the building is very old. You can see the stairs behind Khánh.  That garish big banner on the wall covering up the Green Gecko Restaurant  logo was put there by the gangster who owns the food stall on the opposite corner. Apparently he is the local thug, and he has plastered the neighbourhood with these banners advertising his business, intimidating his neighbours so he can get away with it... 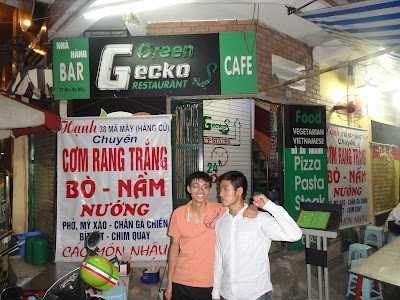 However, once you climb the stairs you come into the main dining room of this restaurant and it's such a surprise... There is a huge, gorgeous mural on the wall, and the chairs are large and comfortable.. they even have cushions!!!  Very stylish ... even the table lamps and accessories are beautifully co-ordinated. They have only just finished renovating it and have been careful to maintain the French colonial flavour while modernising the decor and furniture. 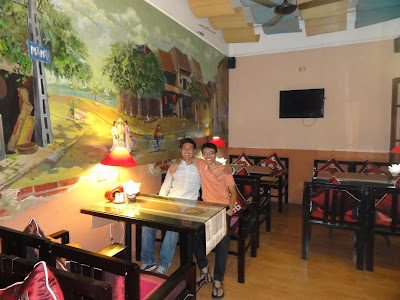 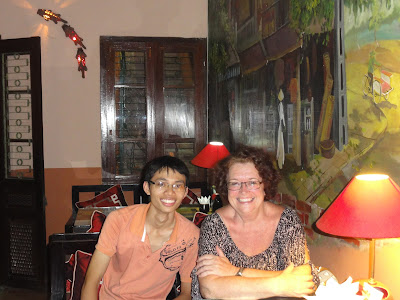 I just loved the mural depicting life in Hà Nội as it was years ago... 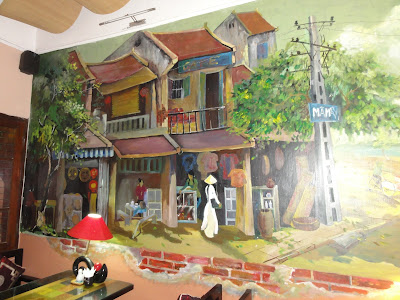 There is a narrow balcony overlooking the street that you just have to check out... 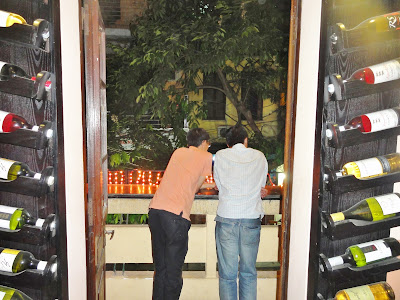 That messy joint sprawling out onto the street is the gangster's business. He is one of the few places open for business all night, so it's very popular with partying tourists who need something to eat at 2-3am 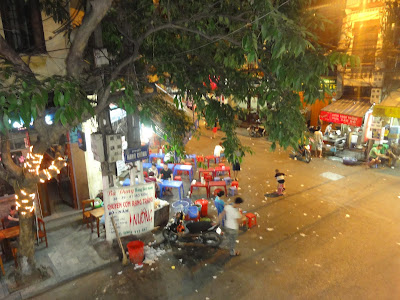 As I was moving around taking photos I found this Aussie on the balcony. He's actually from Perth and works for the Government and is here with a Trade delegation for four days. We had a brief chat and I took this photo, but didn't realise it was so unflattering for the poor guy... but anyway, you can see how the balcony works! 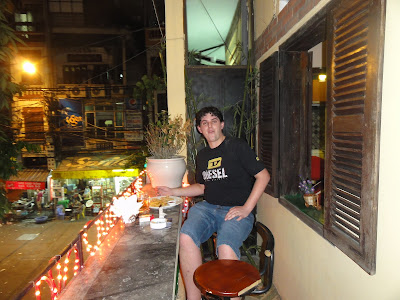 We lined up for a light meal and began with fruit cocktails... 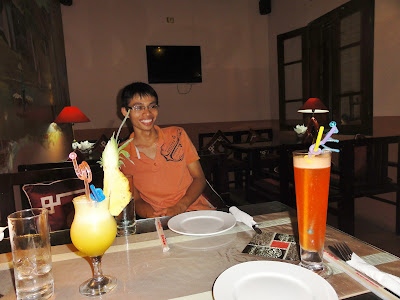 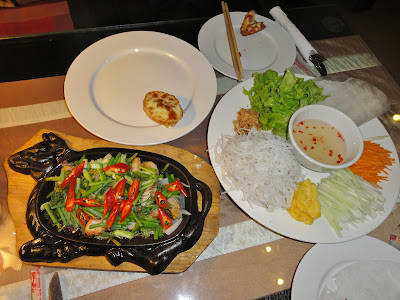 Followed by panchetta, then marinated, grilled snakes-head fish with all these fresh goodies wrapped in rice paper...  delightfully fresh and delicious.  We even had ice-cream for dessert (mine included fresh fruit...) 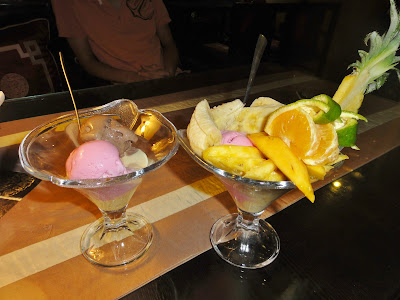 After dinner, Dũng gave us a tour of the rest of the building. The kitchen is clean and spotless. 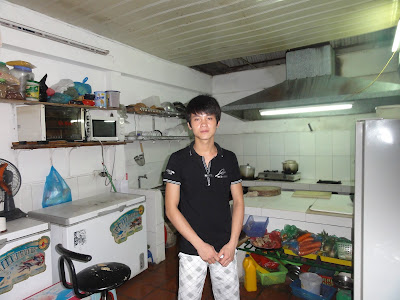 The young chef is a graduate of KOTO - Know One, Train One - a vocational training organisation for street and disadvantaged youth in Vietnam pioneered by Jimmy Pham, a Vietnamese Aussie. KOTO accepts youth whose backgrounds are primarily orphans, street kids and the poor in both the city and rural communities then provide them with an opportunity to acquire skills and live a life of dignity and happiness. This young chef has certainly been trained well!


I was telling Dũng how much Katie enjoyed cooking and about enjoying the classes at Hidden Hanoi Cooking School last year. He offered to teach Katie some Vietnamese dishes when she is back here in November... what a blessing!!

Then we went up to the rooftop terrace. It was quite a surprise to walk into this delightful space... perfect for a party! 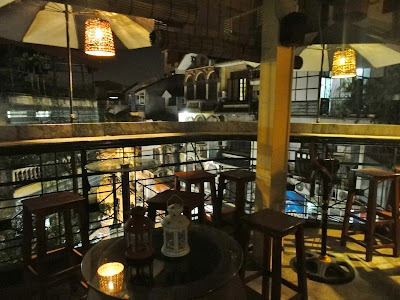 Another fascinating mural decorates this space as well.

It was after 11 by the time we said goodnight and went back to the hotel after a very full day!

On Wednesday morning we made it to the station with time to spare for the 9.30am train. 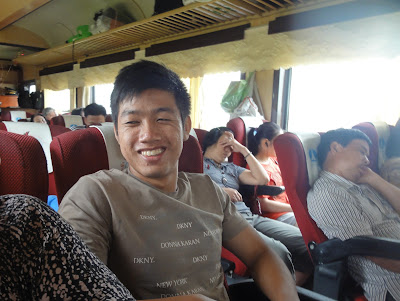 A comfortable ride home... after a visit to Hà Nội it is always a pleasure to get back to Hải Phòng... none of the rush and bustle and traffic of the busy city.  We got back in time for Khánh to drop me off at Texas BarBQ to meet with the girls for Wednesday lunch and regale them with tales of my latest exploits. (LOL)
﻿