On Friday Will said goodbye to his puppy, Phang. She had become too difficult to contain inside (eating everything in sight - including his contract and his contact lenses...) and she managed to fall off the balcony outside Will's room. Fortunately she rolled down the canvas awning before free falling the last few metres... Amazingly, she wasn't hurt, but it was the last straw. So Xuân's brother Đạt said he would take her. She is such a smart little dog... loves to play fetch. 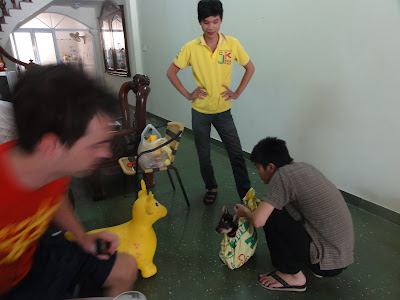 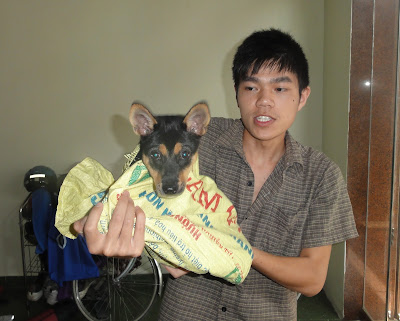 In order to transport her on the bike, they put her in a bag with just her head poking through and slung the bag off the bike for the ride to Đạt's place... 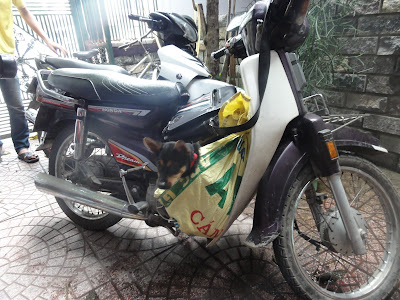 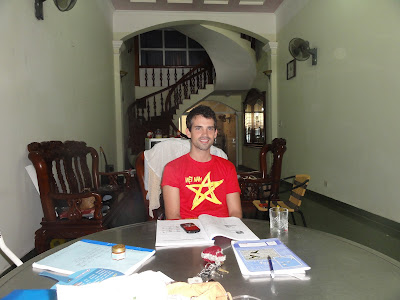 ... leaving Will feeling greatly relieved that she'd found a good home.  We had our Vietnamese lesson with Khánh, then walked down the road to the Phở place where we usually have lunch after our lesson. While we were half way through our lunch, Tony turned up... this is his regular eating place, too, so he joined us.

Neither Will nor I had classes that night, so in the afternoon we went to the movies!!! We saw Men In Black 3. It was a fun movie and so trippy... when you're in the theatre it feels like watching a movie back home. Other than the Vietnamese subtitles, it's exactly the same as Birch Carrol and Coyle... even the seats are the same blue and the popcorn smells the same. And Will says it's the same for him - just as if he's back in Ireland!  He likes to eat up in the movies, so we went to Big C first and bought hot chicken drumsticks and peanut M&Ms to supplement the coke and popcorn from the movie theatre... so cool...

On Saturday I had two classes with children during the day. Ann is back from two weeks in Hà Nội, where she has been studying. Since she was away for my birthday, she kindly bought me back a present from the Silk Village... this gorgeous evening bag!  It goes beautifully with my black dress. 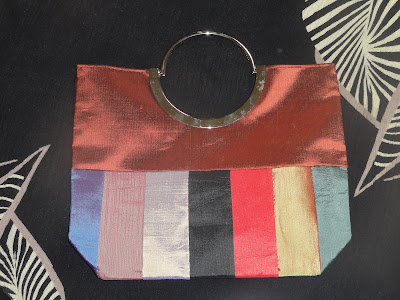 Then in the evening Ba dropped in for a visit and we went out for Bún Chả.  As we finished our delicious meal a guy from the next table who had been eavesdropping, came over and introduced himself and wanted to practice his English. Soon after, another guy invited himself over from the other side. We chatted for a bit, but when he asked for my phone number I explained that I teach at night, so it was unlikely that we could get together to practice his English with me, so he wouldn't be needing my phone number... 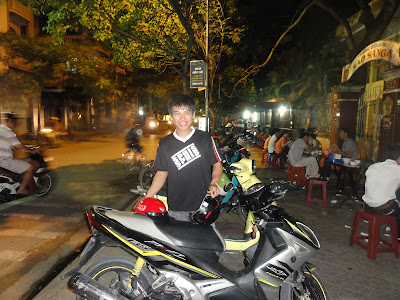 Then Ba took me to his place. He lives in student digs not far from Nam Phap Church. You go down an alley, then a lane then down the side of a house, follow the path around the garden and voila! you're there. 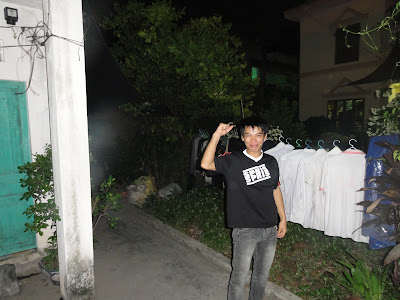 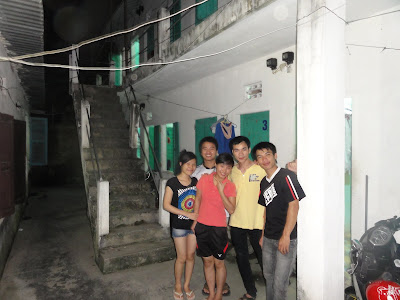 This has been Ba's home for the past four years and the students who live here obviously form a close knit community. Several of them came over to say hello and made me feel welcome. Each room is about 3x5m including a wet area at the back of the room. Ba will be moving out in a few days, to accommodation organised by the company he works for, so a couple of the guys who live in one of the rooms on the left of the photo will move into his room. Apparently their current room floods every time there is heavy rain!

We all sat in Ba's room and he pulled out his guitar and they sang a few songs. When he handed me his guitar I was really pressed to try and remember any songs I could play that weren't children's songs... I'll have to give it some thought before next time! It really is many, many years since I took time to just sit and play my guitar... I should pull it out of storage when I go home... 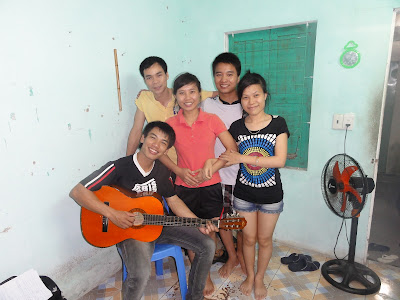 Ba, Quy, Dương, Cung and Thủy (who has a beautiful voice) 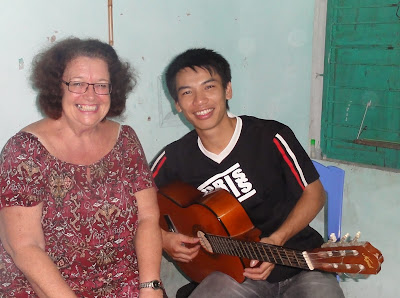 These next few photos I took when taking the short-cut through the alley next to our house on Monday. They are re-sealing the rabbit-warren of alleys... 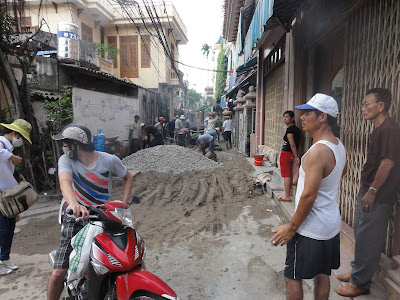 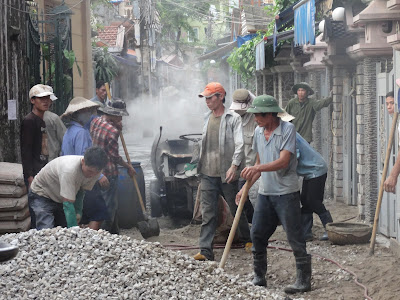 It's a shame the extraordinary three-wheeler cement mixer is shrouded in smoke... they are unlike anything we have in Australia.  This next shot is looking down the lane in the direction of home. This will all be re-surfaced in the coming week or so. 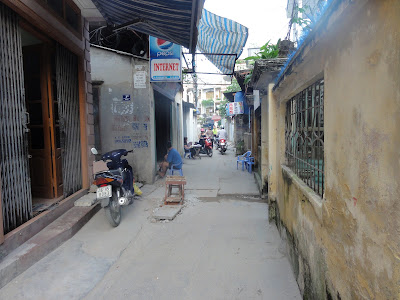 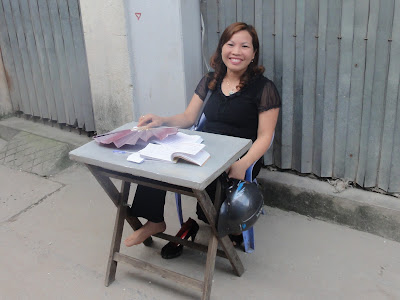 I say hello to this friendly lady every time I walk down the lane. I think she is selling a form of lottery ticket.

On Monday night I was walking home after a late class when I heard my name called. This time it was a student from last year nick-named Max. He was having a sugar-cane juice with his mates, and he invited me to join them. Icy cold sugar-cane juice is so refreshing on such a hot night! They are all in the middle of Uni exams, but Max (Trường) assured me he'll be back studying English at VAIE during their Summer holidays. 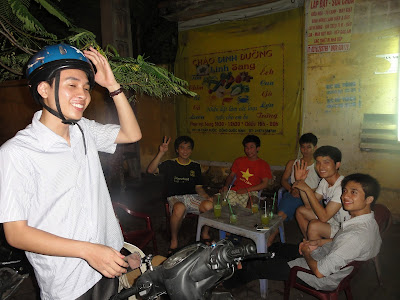 ﻿
We chatted for a little while, then he kindly gave me a ride home.

On Tuesday morning I had to go to work to organise photos for my visa renewal application. I don't usually walk that route at that time of day, so I took some photos of the normal activity along the way. This young carpenter was creating this masterpiece on the pavement near the Bún Chả corner. 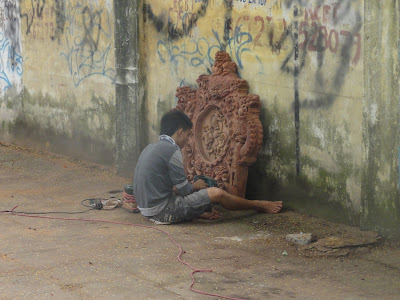 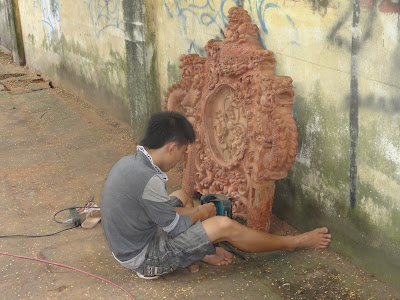 And on the corner, these ladies are in the Bún Chả 'kitchen' preparing the food for a day's trading. 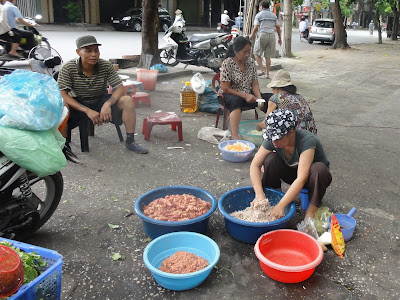 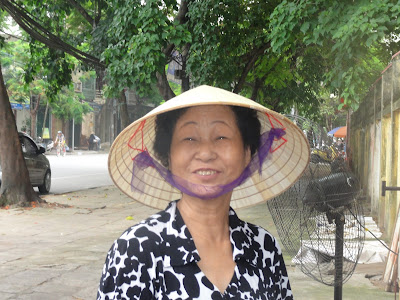 And I couldn't resist snapping these men gathered around at the mechanic's 'workshop' just across the road... 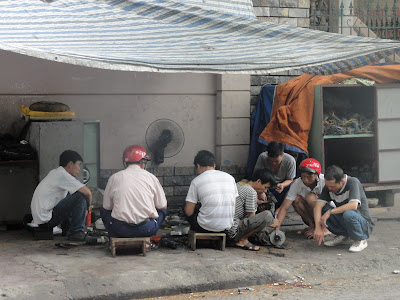 In the afternoon I walked over to visit Gene. I usually organise a ride, but I need more exercise and I was pleasantly surprised that it only took 15 minutes. Her doctor has told her to take another month off work for her broken foot is not yet healed. I stayed for a couple of hours chatting (time passes very quickly when we get together), shared some bread and cheese with her and Becki, then walked home again. It was very hot all day, so a shower was imperative as soon as I walked in the door... followed by the bliss of my air-conditioned bedroom.  A couple of hours later, Khánh came over with dinner... very delicious 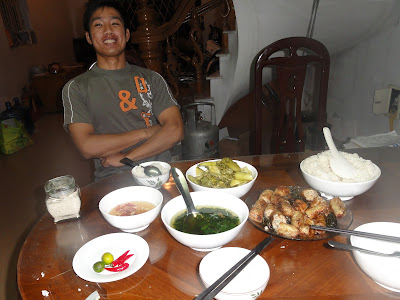 I have been feeling very frustrated trying to learn Vietnamese because I haven't had access to any recordings relevant to the material we have been studying, so I have been learning to read, but as I do it is my voice with my bad pronunciation I hear in my head, so my listening skills are zilch. I decided that I would have to buy a voice recorder and get the boys to read the passages from our text book, so I could move ahead. But Khánh had a much better idea... he downloaded a program for recording and then proceeded to read all the relevant bits from our text onto my laptop. So at last I can hear what it's supposed to sound like whenever I read it. I am now hopeful that I will eventually be able to have a conversation in Vietnamese...

That night there was a party on at Will and Emma's. Their housemates were welcoming a bunch of new teachers that have just arrived to teach at Apollo (the largest English language school in Hải Phòng). Since all of them were teaching that night, the party didn't start till 10pm!  Xuân came over at 9.30pm as Khánh was recording some of my lessons. A little after the three of us headed over to the party. It was quite a shock to walk out of my air-conditioned room into the heat of the evening. To me it seemed even hotter than it was during the afternoon!  By the time we had walked 200m I was dripping with sweat, feeling most uncomfortable and when we got to the party, there were a dozen or so sitting in the living room chatting and it wasn't any cooler in the house, even with a couple of wall fans. After a while, they decided to move the conversation upstairs to the roof, where it was cooler but by then I was saturated so I took the opportunity to discretely leave and hurried back home to another shower and the bliss of a cool room!  It was 5am when Xuân phoned me to open the doors and let him in to get his bike. That young crowd have no trouble pulling all-nighters... way too much for old grannies!

Wednesday began normally. Khánh picked me up and gave me a ride to Nam Phap for our class at 8.25am. He'd only had 2 hours' sleep!  With uni exams in full swing, numbers were down a bit, but we had an enjoyable class. After that, I went to Texas BarBQ and joined the Wednesday lunch girls. It's always good. The conversation is lively and the food's great. I spent the afternoon reading  The Girl With the Dragon Tattoo by Stieg Larrson. ... very engrossing!

That evening Ba called to see if I was busy, and I actually had a Wednesday night off, so he picked me up and we went out for sữa chua nếp cơm...sticky rice with yoghurt... very delicious.  As you can see, this place is very popular with the locals. 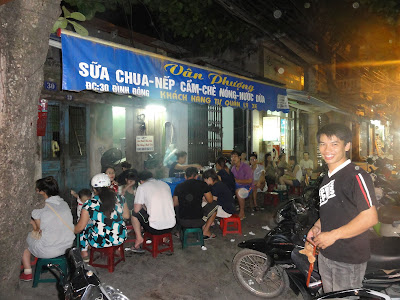 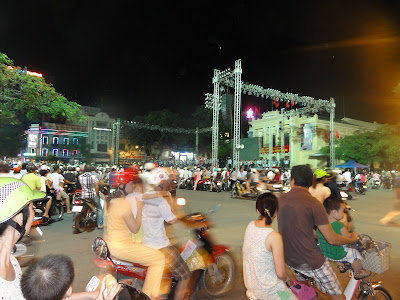 We went for a ride into the town centre and it was packed. There is a festival celebrating Hải Phòng on this weekend and a huge choir was rehearsing on the Opera House steps. They were excellent. We stopped and listened for a bit, then went to An Bien Lake to sit and enjoy the evening. 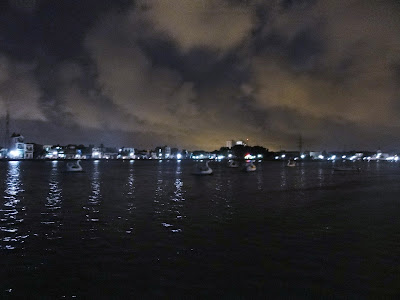 It is a very popular place. There were many swan boats paddling about and there was a full moon coming out from behind the clouds every so often and the sky was far more pink than the photo shows... 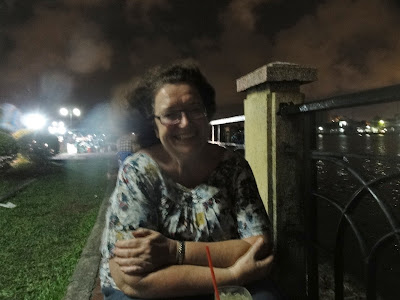 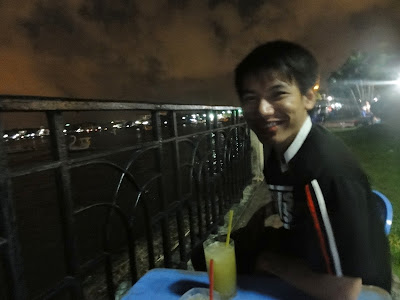 We sat at the edge of the lake in the cool breeze and drank icy sugar-cane juice and talked. Another lovely relaxing evening.... and so life goes on. (I do actually teach as well as socialise, but I am only doing about 60% of the work load I had last year, so it's all good!)