Early this morning I had a call from Khánh from Hà Nội airport ... off on his grand adventure.  He'll be away for a long time, but it will be amazing.

Tuấn Anh came over in the afternoon and took me for a ride to see the largest Pagoda in Hải Phòng - Chùa Cao Linh, Bắc Sơn, An Dương.  It's about an hour's ride out into the countryside... I love the rice paddies and little villages along the way - so very picturesque. 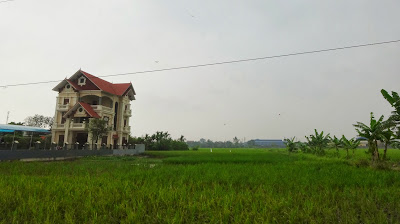 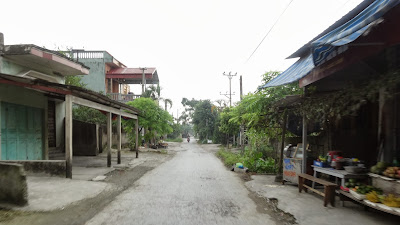 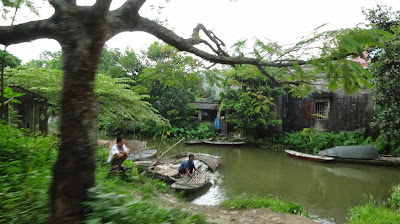 Chùa Cao Linh was built by the Chinese seven years ago, on the site of an ancient pagoda that was several hundred years old. It covers several acres and is a very ornate complex of buildings, pavillions and gardens. The style and decorations are Chinese. 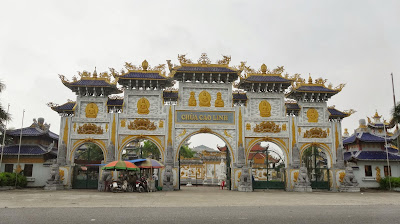 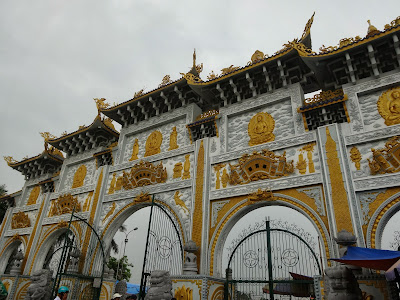 Inside the gates, everything is clean and immaculate. There were only a handful of people there, looking around like us, and a few nuns stationed at the doors of the various buildings. 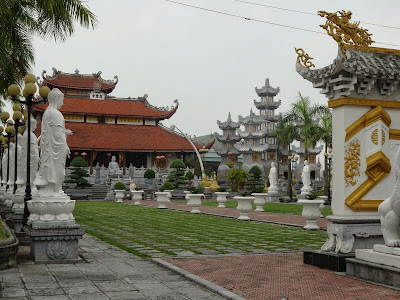 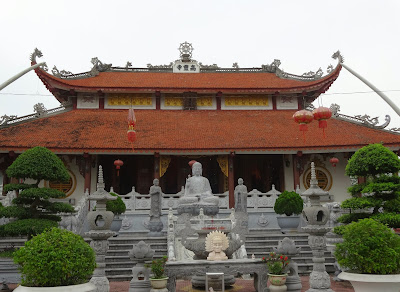 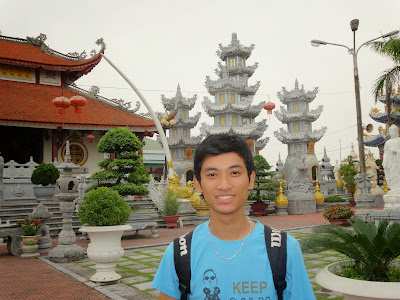 Tuấn Anh is a charming host. I asked lots of questions and when he didn't know the answers he asked the next nun we saw...
There was a very long mural wall of posters depicting the most hideously explicit drawings of people being tortured in hell - with explanations of what sins they had committed while on earth to deserve such horrors (in Vietnamese, of course). It was disturbingly gruesome. Somebody has thought of / imagined / 'seen' all those gross acts of torture in order to have drawn them... demons and all. There were five panels for each of the seven (I think) levels of hell. Only the last panel depicted those lucky enough to get reincarnated............ I definitely prefer the Gospel of Jesus Christ!!

Inside the various temples everything was covered in elaborate decorations, with colourful statues - a feast for the eyes. 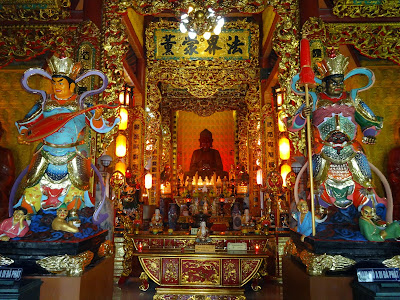 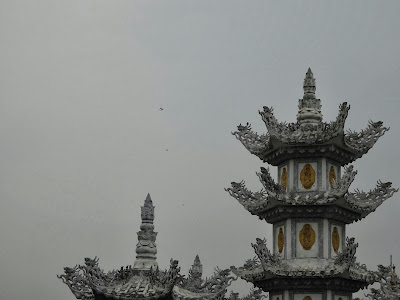 Can you see the two kites in this photo?  We saw many kites in the sky in the surrounding countryside. They were quite huge - at least a couple of metres long, controlled by just one line.  Although we saw many kites flying, I didn't spot anyone actually controlling them on the ground. If they were boys, they must have been very strong to hold them.

We had a delightful afternoon and I was surprised how fast the time went by. We returned home by a more direct route and it was much quicker. Tuấn Anh lives at Đồ Sơn, so he still had another long ride to get home.

I spent the evening on skype with Katie. She is in the final stages of completing the last assignments for second year Uni and has been putting in very long hours and late nights to get it all done to her exacting standards. I help where I can.