A couple of 'normal' weeks

It's two weeks since I was in Laos and it seems like that was ages ago... probably because there's so much to do here, even in a 'normal' week. Here's how the last few days have panned out:

Friday, 14th September  -  I woke up early and went for a walk and by the time I got back the workmen who were resurfacing the alley next to my house were already deafening the neighbourhood with their jack hammers (at 6.30am!) ... 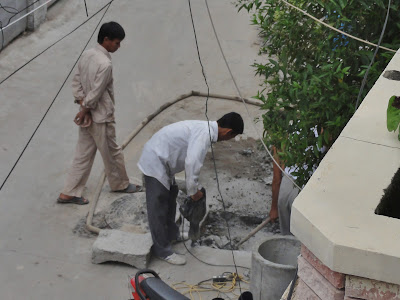 Since the short-cut was blocked off, I had to walk around the long way to go to ISALCO to teach the Seamen for two hours from 9am. When I returned home Xuân was here. We went around the corner and had phở xao for lunch and did a short English lesson, after which I had a nap, did some blogging and talked to Katie on skype and went to work at VAIE for the evening.  One of the Nam Phat students, Thái, came around with some nem chua that her mother had made... 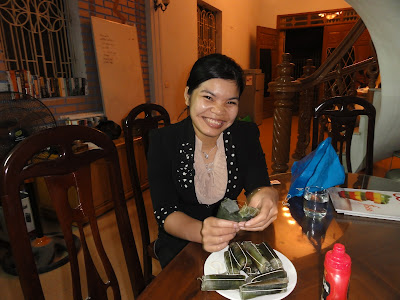 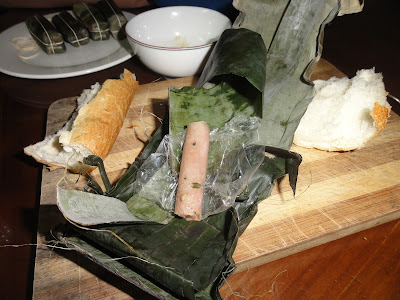 They are like spicy little sausages of finely ground pork mince, tightly wrapped in plastic, then copious layers of banana leaves then steamed. Great with fresh crusty bread and sweet chilli sauce, but I must admit when she told us they were called nem chua I thought she said nem chó (pronounced choa - which is dog meat) and I freaked out a little bit.... But she laughed and assured us it wasn't! 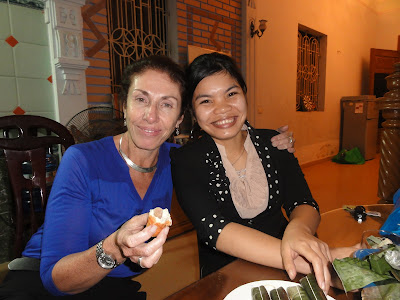 Thai has been taking Toni shopping, teaching her Vietnamese and Toni helps her with her English... something different to try for supper tonight.


Saturday, 15th September  -  This was a full on day of teaching at VAIE... four classes, beginning at 7.30am and finishing at 7.30pm. As I was trudging home I ran into Trung and Nga having hotpot at a restaurant not far from home. They were celebrating a friend's birthday and kindly invited me to join them. 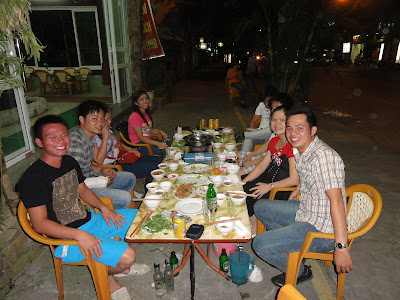 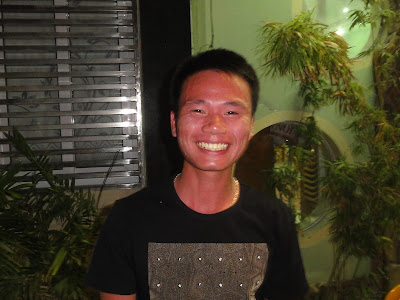 This is Hiền. He was saying his farewells, for in a few hours he was to leave for Hanoi to fly to Singapore where he will board ship for his first posting at sea. He expected to be away for about 12 months. Such a long time. Many of my students have to deal with that prospect of missing their families and friends for extensive periods.  Hmmmm... come to think of it, so to ESL teachers!
Sunday, 16th September    -  Another early start, but I was finished at 11.30 and had the unexpected pleasure of having lunch with Khánh!  He came home yesterday to check on the demolition of the front part of his house and was here for the weekend. We enjoyed Bún Chả and he got to put up with me regaling him with tales from my adventures in Laos... Then he went off to catch up with other friends and I had a snooze.


That evening Toni and I caught a cab into the city to go to a farewell dinner for four more of the teachers who are leaving. We all met at a popular restaurant called Big Man which boasts an extensive menu and brews its own beer and is very popular with this crowd. 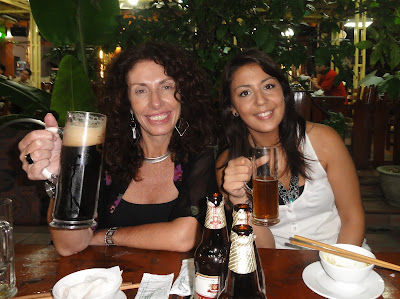 Can you believe the size of that beer glass??  This lovely girl is Ida, from Denmark. She's a student doing work experience in Hanoi and was in HP for a day or two.

Monday to Friday 17th-21st September  -  The week passed so quickly... 5.30am start with a walk, morning classes at Nam Phap, ISALCO and the Kindergarten as well as filling in for a friend teaching at a local Primary School, so mornings were flat out. I usually managed to have a nap after lunch and most afternoons I had the pleasure of going for coffee with various friends. I took photos of some... 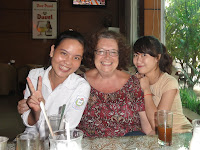 Ngan, Phương and Sáng
but didn't get around to taking photos of most of them ...  Tung and his mate, Khai, Tien and his friend.... 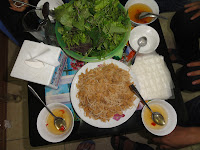 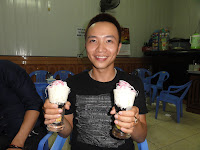 They dropped me home in time to be picked up to teach an evening class.... after which I went out with the students and enjoyed a mango smoothie. I was annoyed with myself for forgetting to take a photo, but it was late and I'd had a huge day...


In the midst of all this frantic activity, the roadworkers were busy on the alley next to our building. But they finally finished late on Saturday. There was so much noise from the crowd that had gathered (and the ancient old diesel cement mixer)   that Toni and I went outside for a look. They were all hot and sweaty, standing around to see the last bit of concrete poured so I pulled out my camera and took photos as we laughed and joked around... The women here do manual labouring right alongside the men and work extremely hard. 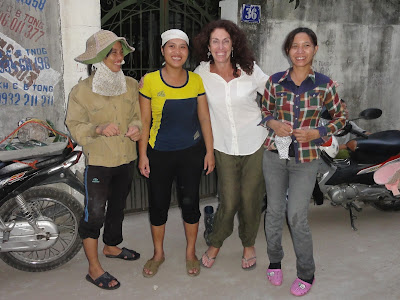 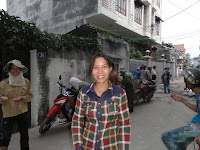 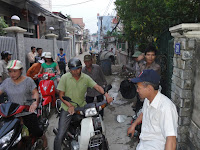 You can see the concrete mixer that was making an infernal racket all day in the background. 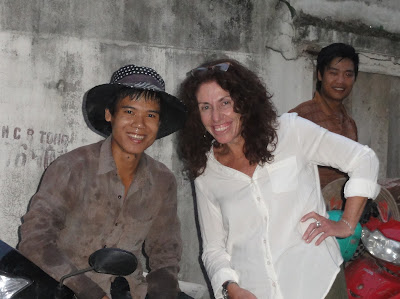 Sometimes I'm sure the people wonder why I would want to photograph things they regard as mundane, but it's all fascinating to me ... and they never seem to mind. Toni is always right in there... (Don't Vietnamese people have beautiful teeth? !!)

Speaking of Toni, here she is on 'Doris' - the bike she bought from Ian before he left. It's an automatic scooter. Great for getting around, but not so comfortable for pillion passengers because of the position of the foot pegs. 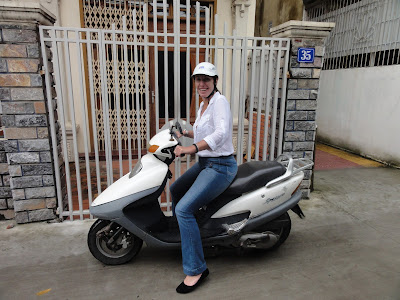 After work on Saturday night I was on my way home after the late class and I saw Toni sitting at the restaurant on our corner, so I joined her for a very late dinner. This gorgeous little girl wandered over for a cuddle. Her mother works there... maybe her family owns the place... Either way, she is usually wandering around well after 10pm. 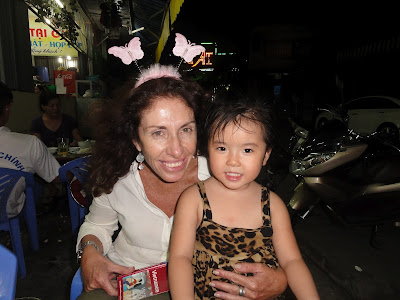 The butterfly head band actually belongs to the little girl, not Toni   LOL

On Sunday afternoon I finally got to catch up with Ba. His course is finished and he did extremely well. He came over for a while and we swapped stories. He picked up the guitar and played some songs (always a treat!), including a couple that he wrote. Of course the words were in Vietnamese, but the songs were just beautiful. I hope he records them as he plans, even if only for facebook. Then I can hear them again whenever I like. He took me to visit his mate, Duyên. He is also a navigator, on shore for six months while he improves his qualifications to return to his ship with a higher rank. 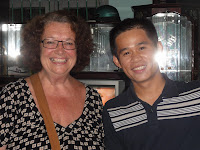 An hour went by very quickly in such pleasant company. Ba dropped my home in time to turn around and go to another Pub Quiz at Phono Box with Toni. We got there early and grabbed a bite to eat from the very limited menu - either prawn toast (which they called 'shrimp sandwich') or beef stew. The rest of the crew from VAIE arrived - John and Melissa and Graham - and we formed an Aussie team. Didn't do any good, but it was fun. 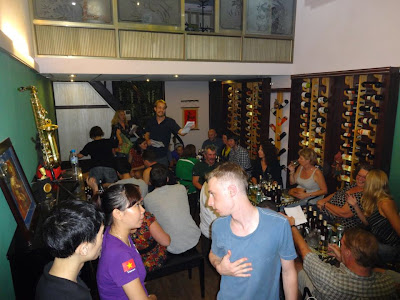 Check this out... The classroom at Nam Phap church is often really hot and the wall fans don't reach the front where I stand most of the time, so each week one of the strong lads brings this whopping great heavy pedestal fan from Madame Tra's house so I can have cool air! Talk about well looked after! 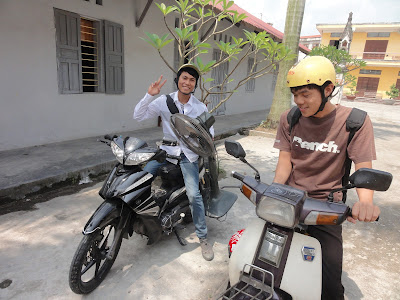 This week English Hannah and her 15 month old baby, Sam, came to our class. Sam was a huge hit and it was lovely to see several of the young men keen to pick him up and play with him. He was more often on the lap of one of the guys than the girls!

And so life goes on... Lots of classes all over the place, plenty of lovely friends wanting to drink coffee whenever I am free, all surrounded by this fascinating culture. This afternoon Tiên Viên picked me up and we went for a coffee before I had to teach. That was a first for me (coffee before a lesson) and I was quite surprised to realise that it gave me a buzz, which wasn't at all unpleasant. Then Sáng picked me up after my class. On the way home we joined at a great crowd of people blocking half of Lạch Tray who had all stopped to watch a team of five Lion dancers performing - quite a spectacle! 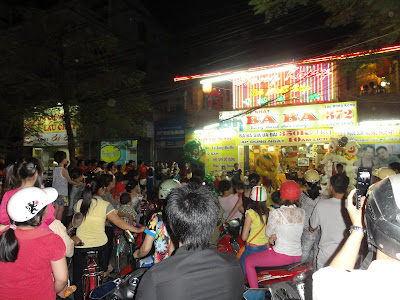 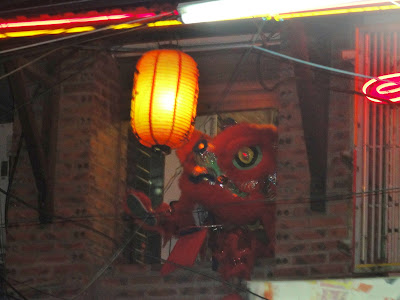 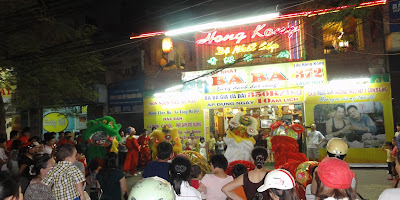 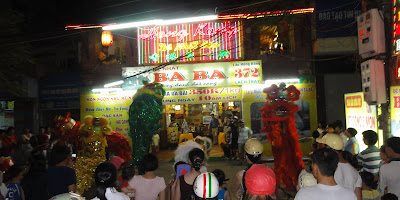 There are colourful teams of Lion Dancers all over the city preparing for the Mid Autumn Festival this weekend. Just tonight on the way home we passed 3 - including some little children having fun. People just stop and block the road if they want to watch.

We stopped for some fried rice for dinner and Tony rocked up. He's settled into his new post at VIMARU and enjoying life. Sáng and I finished the evening with a yoghurt drink at Paragon Cafe and now I'm ready for bed! Tomorrow morning one of the Nam Phap students wants to join me on my early morning walk and he rang to say he's invited a mate of his to join us. OK...  !