I have to go to Hà Nội to the Australian Embassy to get my documents for my work permit verified, then to the Vietnamese Consular Office to get the Australian Embassy's verification verified in order to have the necessary paperwork for processing my work permit. Since I had Friday off, I decided to go to Hà Nội and get it over with. When I told Khánh my plans he kindly offered to come with me... going by train instead of by bus so we could take his bike. So bright and early, at 5.30am he picked me up and we went to the Station. 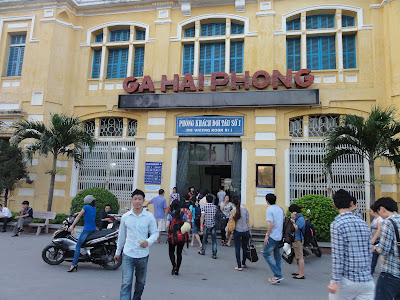 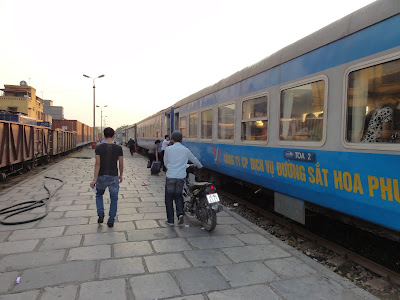 Before loading a bike onto the train, you have to siphon off the petrol, so we filled a 1.5 litre water bottle and Khánh put it in his bag. Then when we left the bike at the train ready to be loaded, a lady came over and quickly siphoned off what remained... she must do a roaring trade, for there's no recompense for the petrol she snaffles!

So this is what Hải Phòng station looks like in the early morning light... from the 6.10am train. 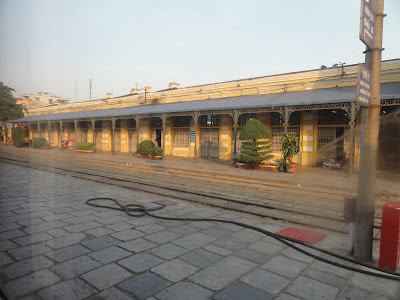 We were in an air-conditioned carriage which was quite comfortable and the two hour ride passed quickly. Being the early train, it wasn't very crowded either. There was a concert screening on the TV, but the volume was nowhere near as loud as usual over here, so we could still hear ourselves talk! 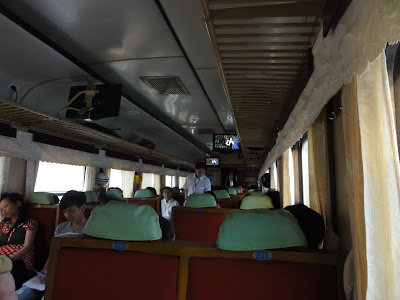 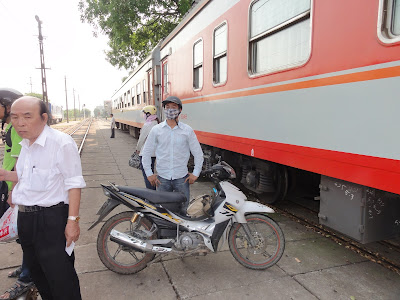 When we arrived in Hà Nội and unloaded the bike, Khánh poured the petrol back in and we pulled out our maps and headed off to the Australian Embassy, which we found without any trouble. I had been told before leaving Australia that I would need my documents notarised, so I found (and paid for) a public notary in Coffs Harbour to do just that, which cost me $100. Well that was rubbish advice... at the embassy they only wanted to see the originals of my police check and one of my Uni degrees so they could photocopy and stamp them for themselves. That didn't take long, so our next stop was the Vietnamese consular office, which we found after a bit of going around in circles. Again, it didn't take long to fill out the necessary paperwork, but frustratingly, the processing could not be done today, so I will have to come back to Hà Nội next week to pick them up.


Our next stop was the Goethe Institute, where Khánh made enquiries about German language courses during the Summer break. They have several, but all the teachers are Vietnamese, not native German speakers, so he won't be paying for that.


By then we were getting low on fuel, so we rode along asking many people where to find a petrol station, but they are as rare as hens' teeth in the city centre. Before we found one we ended up in the Old Quarter so I introduced Khánh to that fabulous little place for Bánh Khúc (Mung Bean Dumplings)... 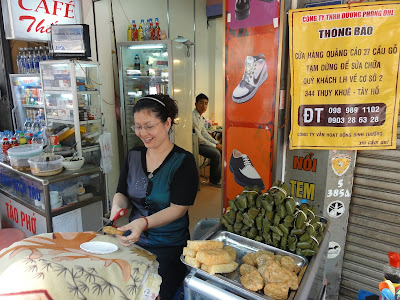 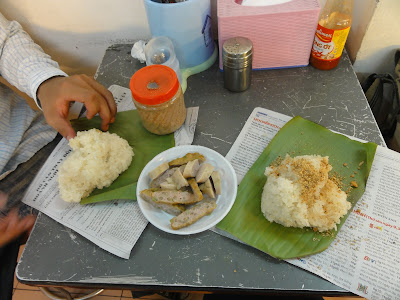 Since neither of us had had any breakfast, we were starving, so it was even more delicious than last time!


We decided on ice-cream for dessert, so Khánh took me to this place that sells award-winning Vietnamese ice-cream. It has a very light texture, almost a sorbet, with a slight coconut flavour. Yummy. 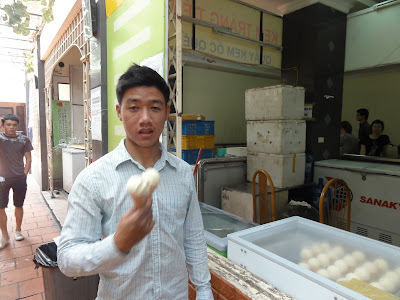 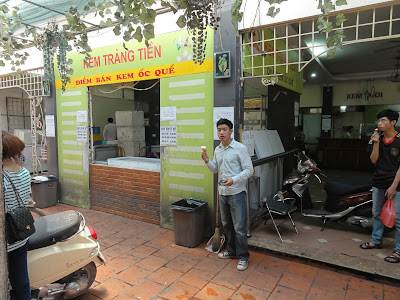 If you weren't a local, you'd have no idea this was even here from the street front... which would explain the absence of foreigners in this city full of tourists. It seem like you're walking into a parking station... looks a bit like that when you're in there too! 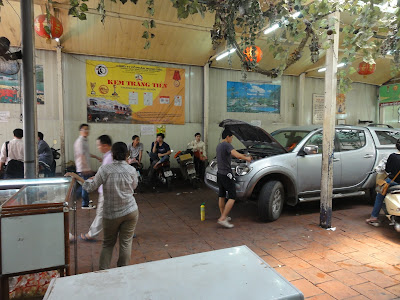 It was a very hot day ... over 40C, so we opted for a seat in the shade at the top of Hoàn Kiếm Lake rather than walking around the shops. I bought a fan from a friendly hawker and used it for the rest of the day... even on the train all the way home.


Our petrol situation was getting serious, so we mounted up again and rode off in search of a petrol station, finding one eventually. Then we found a charming little cafe tucked away off the street nearby and sat in the cool with Coke and ice for an hour or so. I was so involved in our conversation I forgot to take any pictures, so I'll just have to rely on my memory for that one... shame about that, for it was quite unique. Oh well!

By then it was 2.30 and there was a train home at 3.10, otherwise the next one would be at 6.10 so we headed for the station, stopping along the way to siphon off the bottle of petrol! We made it to the Station, Ga Long Biên, at 3pm only to find we were at the wrong one and needed to go across the river to the station we'd arrived at... Ga Gia Lâm. By then it was already 3.10 so we took off, asking for directions occasionally, rushing to get there before the train. We were half way across the bridge and the bike coughed and Khánh said he thought we were running out of petrol!!!!

Talk about a circus... but we got there in plenty of time and found the right gate. 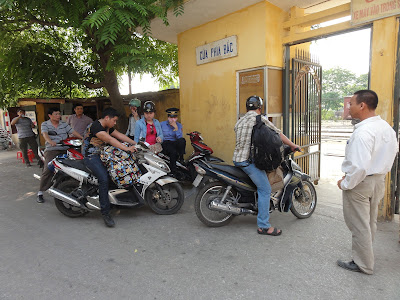 While Khánh pushed his bike down the track to the loading area in the stinking hot sun, I waited at the gate in the shade and chatted to the ticket ladies. They were extremely friendly and one of them spoke some English. I love taking to random people over here... everyone around usually joins in and there is always lots of laughter as we struggle to understand one another. 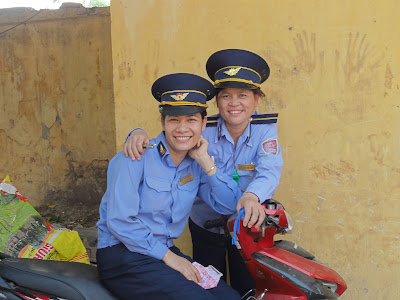 The train was full on the way home, but since our seats were allocated it didn't make any difference to us. Again two hours passed quickly as there is no end to the things we talk about. We got back to Hải Phòng a bit after 6pm, so we stopped off at Thiên Ý, a beaut little vegetarian place we went to with Will recently. Check out our dinner..... 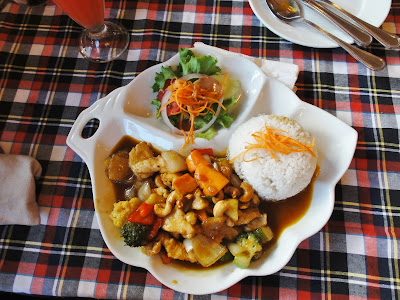 And so ends another adventure... another thoroughly enjoyable day made so much more so because of Khánh's gallantry. I had been quietly dreading taking that trip to Hà Nội to sort out the paperwork for my work permit, but instead of being an inconvenient chore, it turned out to be a fabulous day. I must admit I did gloat just a little when I was telling Katie later on Skype about what we did and what we had for lunch....﻿