On Monday, Hiếu and Quế Anh walked with me, and along the way this quaint little old man rode up and stopped to ask if he could share a poem with me. (I have seen him ride past most mornings for the past couple of years.) He pulled a photocopy out of his pocket and gave it to Hiếu to translate. It was a parody along the lines of "There was a time when you were....but now you're...."  Like "There was a time when you were like a swan but now you're a chicken!"   We all had a good laugh as they struggled to translate it. I think towards the end it got a bit risque by the looks on their faces and Hiếu's reluctance to translate that bit...  He stopped us again as we came to the bridge to talk some more, so this time I got Hiếu to take a photo...now the old guy wants a copy of the photo! Apparently he has a daughter living in Melbourne whom he's very proud of. 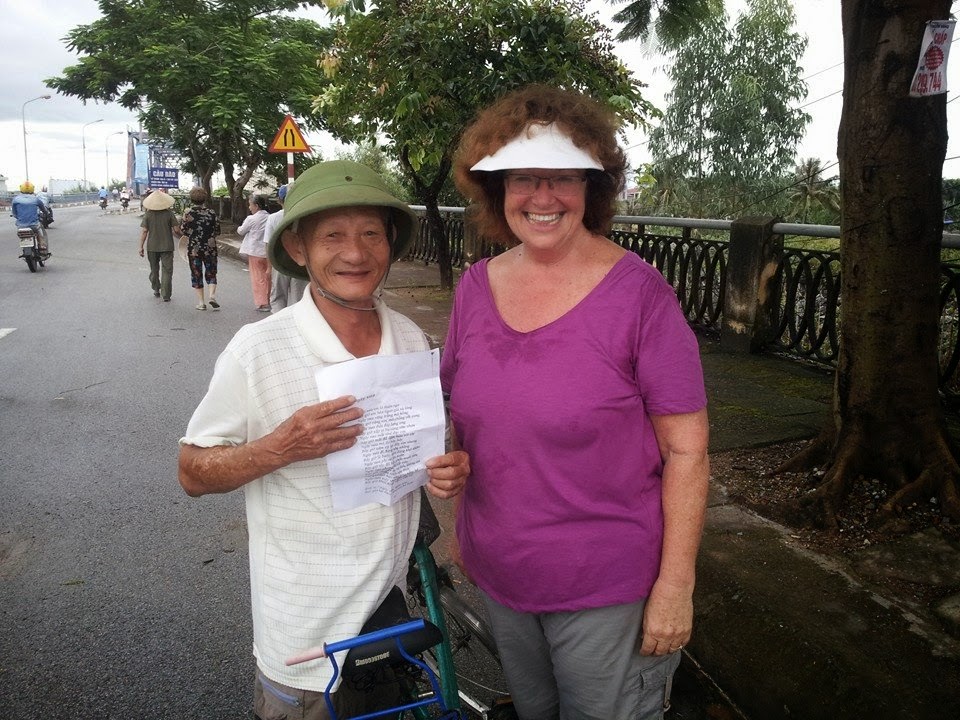 Quế Anh's parents have a bánh cuốn restaurant on Cát Bi Street. I went there for breakfast last year with Tiến. Quế Anh invited us home for breakfast today, so we enjoyed a very filling bowl of bánh cuốn. It is fascinating to watch her mother make the rice noodle pancakes. She's like a machine with precise movements in strict sequence. She gets a special type of rice direct from the farm to make it... no wonder Katie and I were unsuccessful when we tried to make it in Coffs last year!  HAHA. 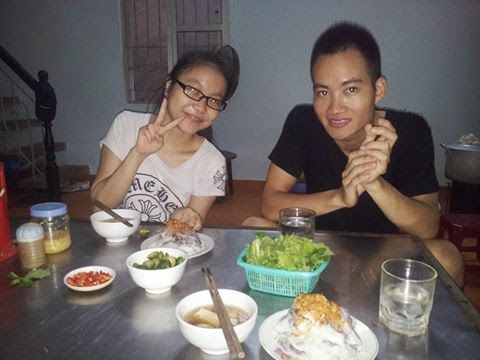 It was raining by the time we finished breakfast, so Quế Anh lent us a couple of umbrellas and Hiếu escorted me home. Then he took the umbrellas back and had to run back to his place in the rain! ... I feel very well looked after...

Graham and Lee have gone to Huế with Ross and Silvana for the 2 day public Holiday (Vietnam's Independence day celebrations and Uncle Ho's birthday). Rather than leave these beautiful condolence flowers in their room, they kindly gave them to me to brighten mine. 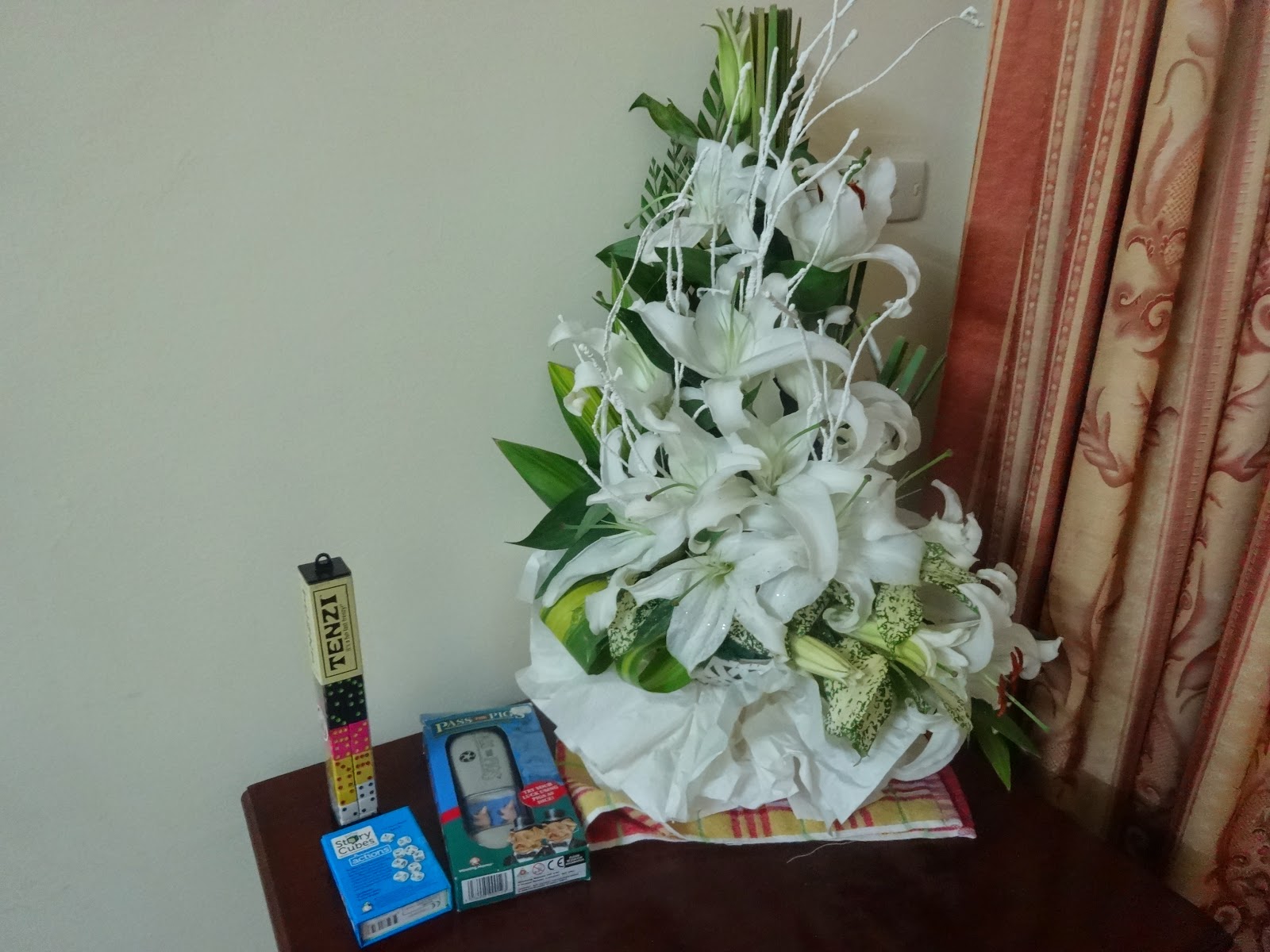 The last week has been pretty hectic, so I wasn't sorry to have a rainy day in my room. I needed time to catch up on my blog and I had a lot of questions from Rocky to answer by email...but the up-shot of that is that I now have a team member in my business in California!!  Woo-oo!!

Trung Ho came to visit me in the afternoon, and stayed for a salad dinner. I taught him to play "Pass the Pigs"  ... a fun little game where the "dice" are little plastic pigs. He said he'd come walking in the morning....

No sign of any of my walking crew as I left at 6am, and no-one waiting at the bridge, so I walked alone. By the time I reached the second Cầu Rào bridge, I could see a huge black storm front rapidly building in front of me 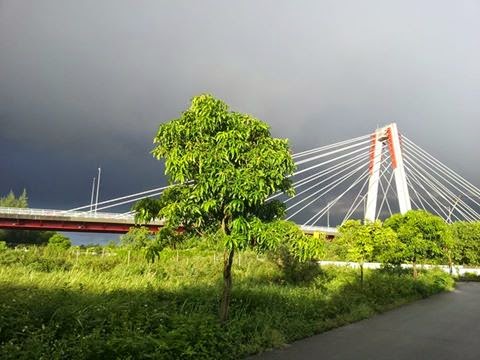 When I pulled out my phone to take the photo, I had a message from Trung ..he had arrived late and was coming. 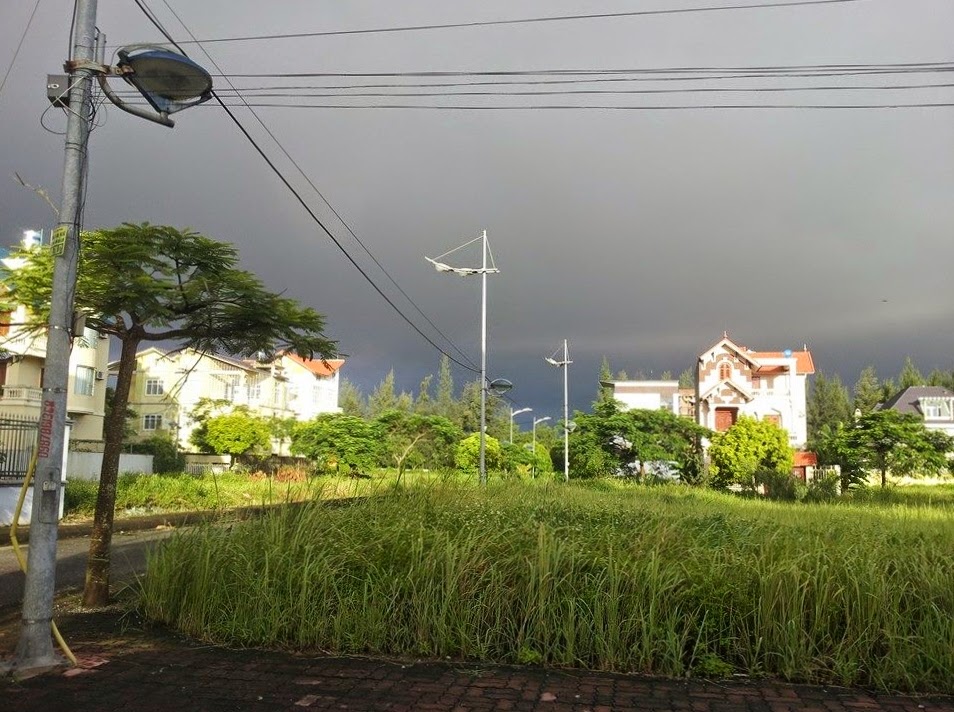 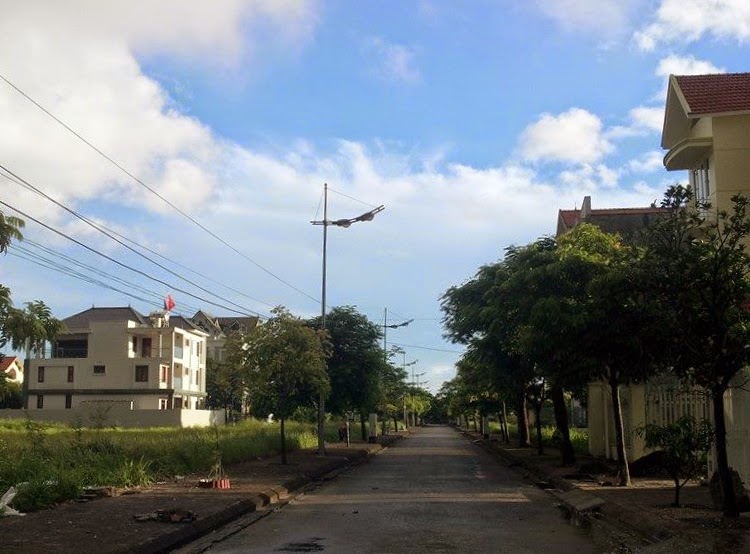 I picked up the pace and hurried home. Over my shoulder the black clouds were  following me, while it was still blue clouds ahead of me!  In the end I made it home with just a few minutes to spare, and Trung made it back to his place dry too. 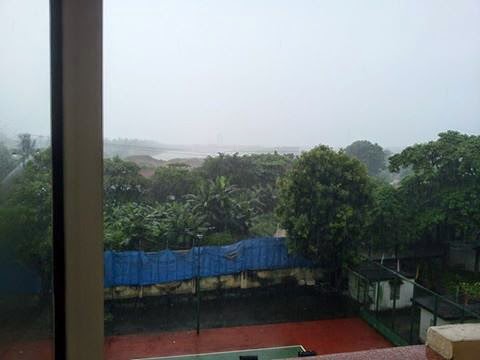 Then I watched the rain as it came down the river, till it was raining so heavily I couldn't see the bridge from my window. But we were back to blue skies a couple of hours later.

One of my students messaged me to turn on the TV so I could watch the Buffalo Fighting. The tournament lasted all morning...there were a few gruesome bouts. I don't think I'd want to see it live...not as hideous as Spanish Bullfights in that it is only Buffalo vs Buffalo without men interfering, but awful to see when one of them gets hurt.  Most battles ended with one Buffalo calling it quits and running away. 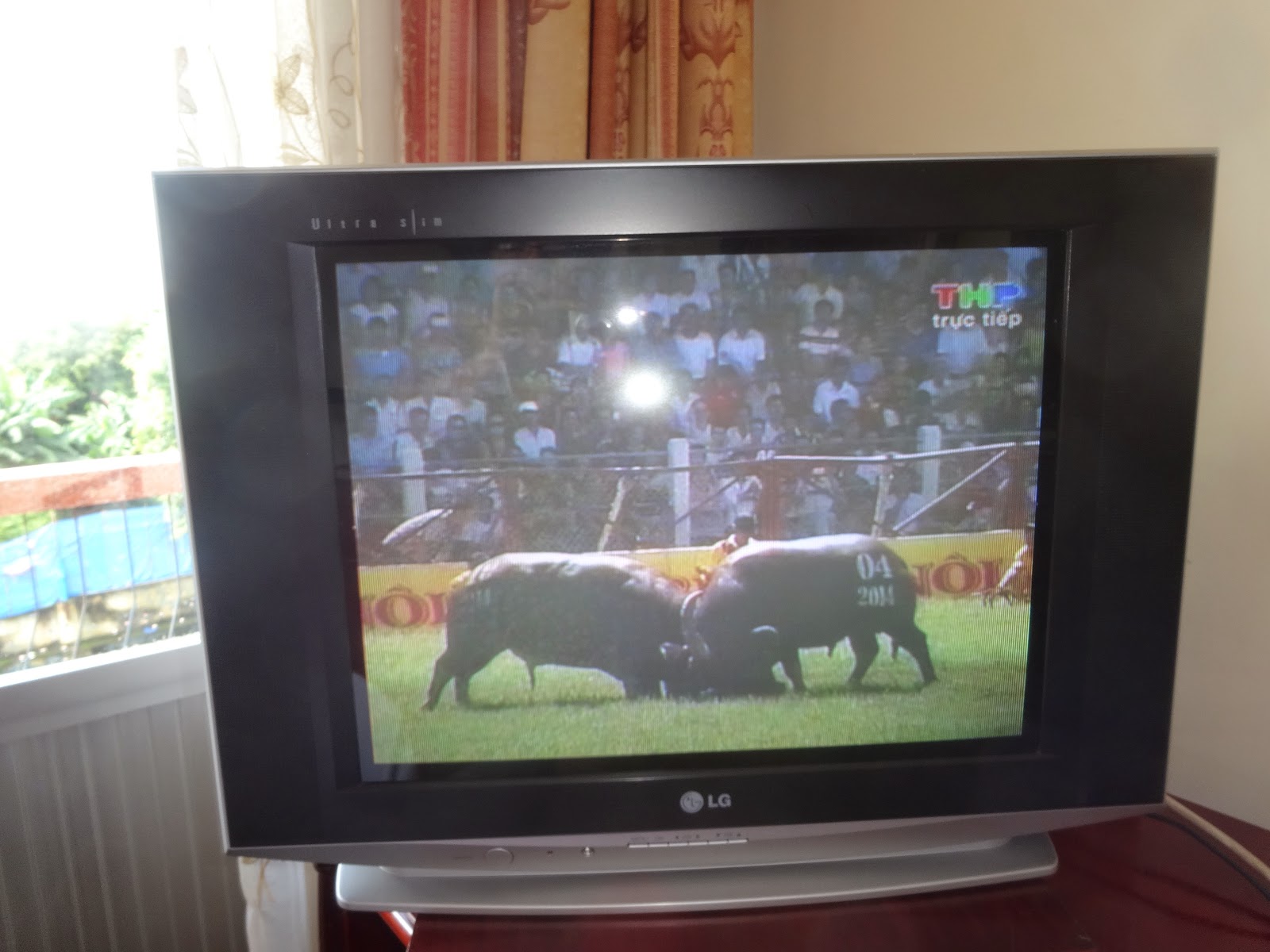 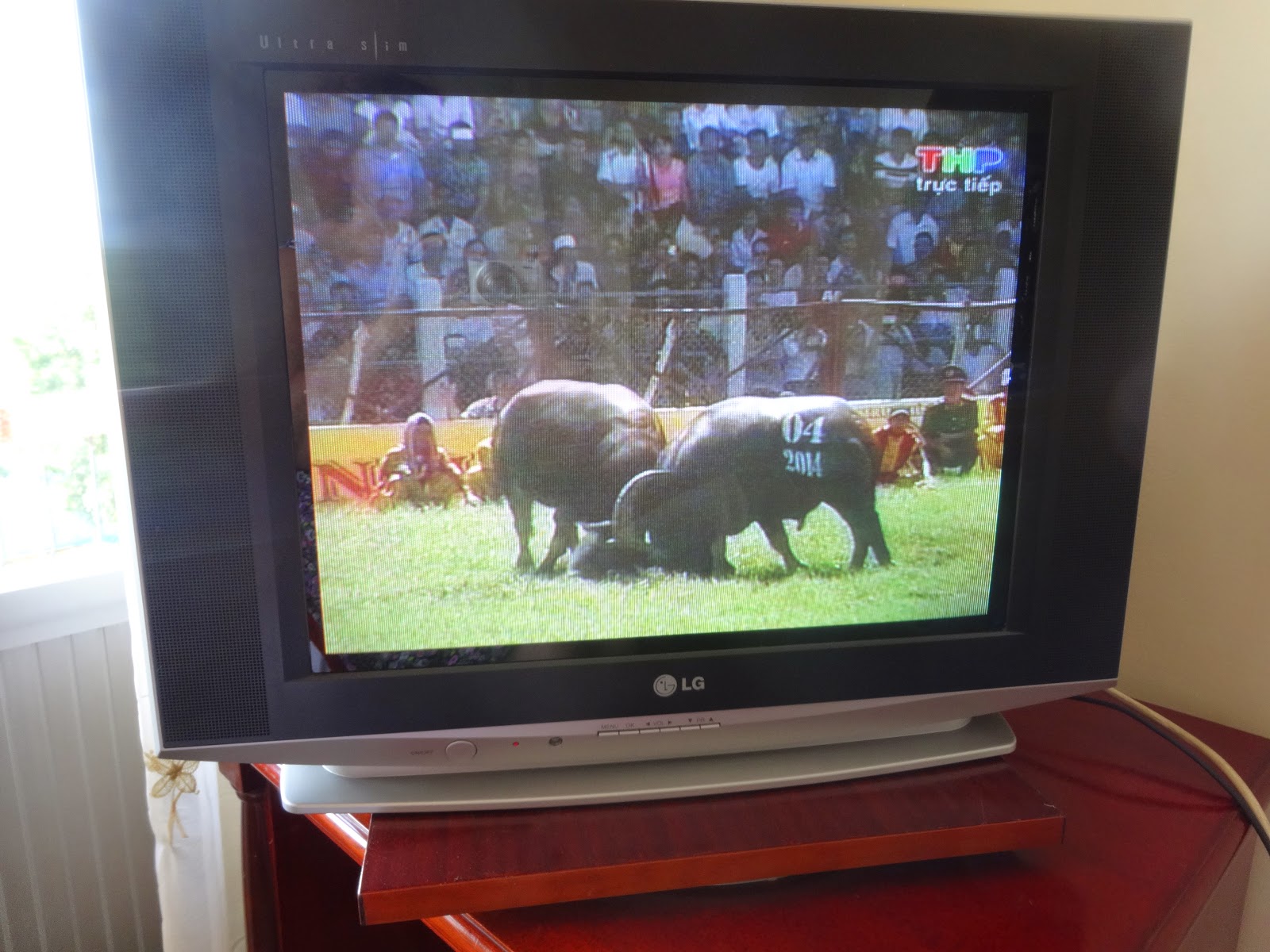 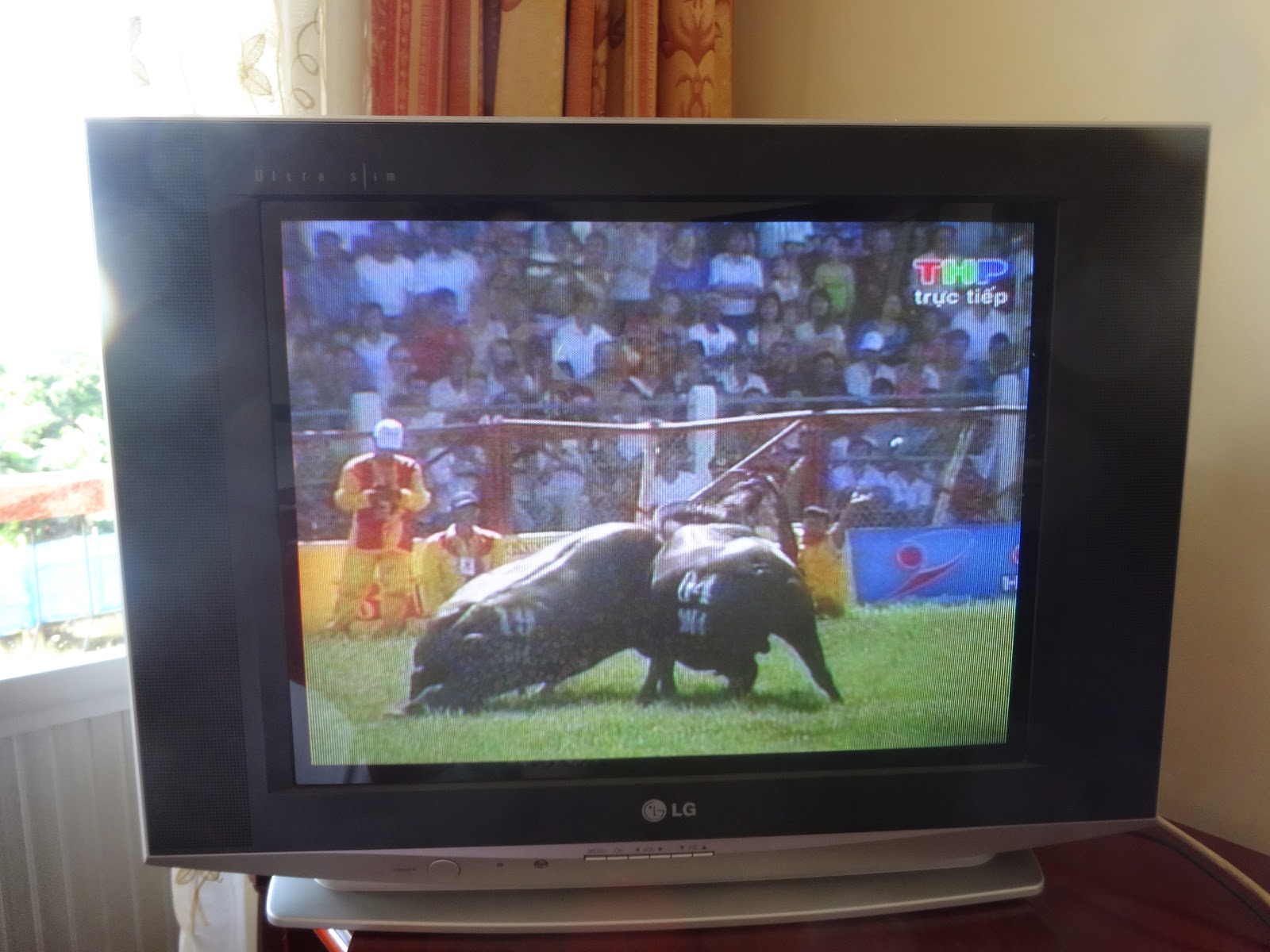 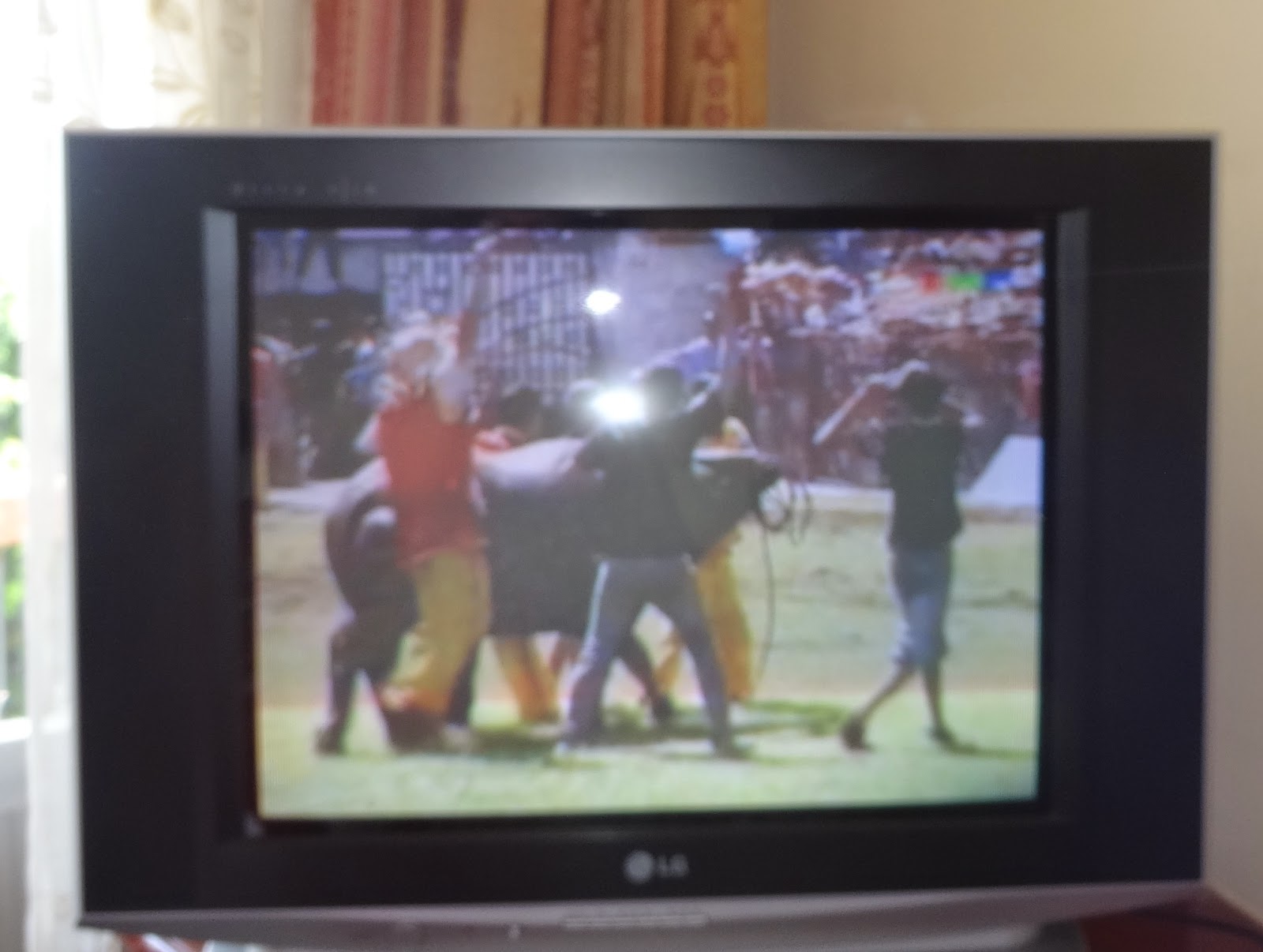 Later in the afternoon my dear friend Tuyền came to visit, laden with gifts from his mum, from his home town.... 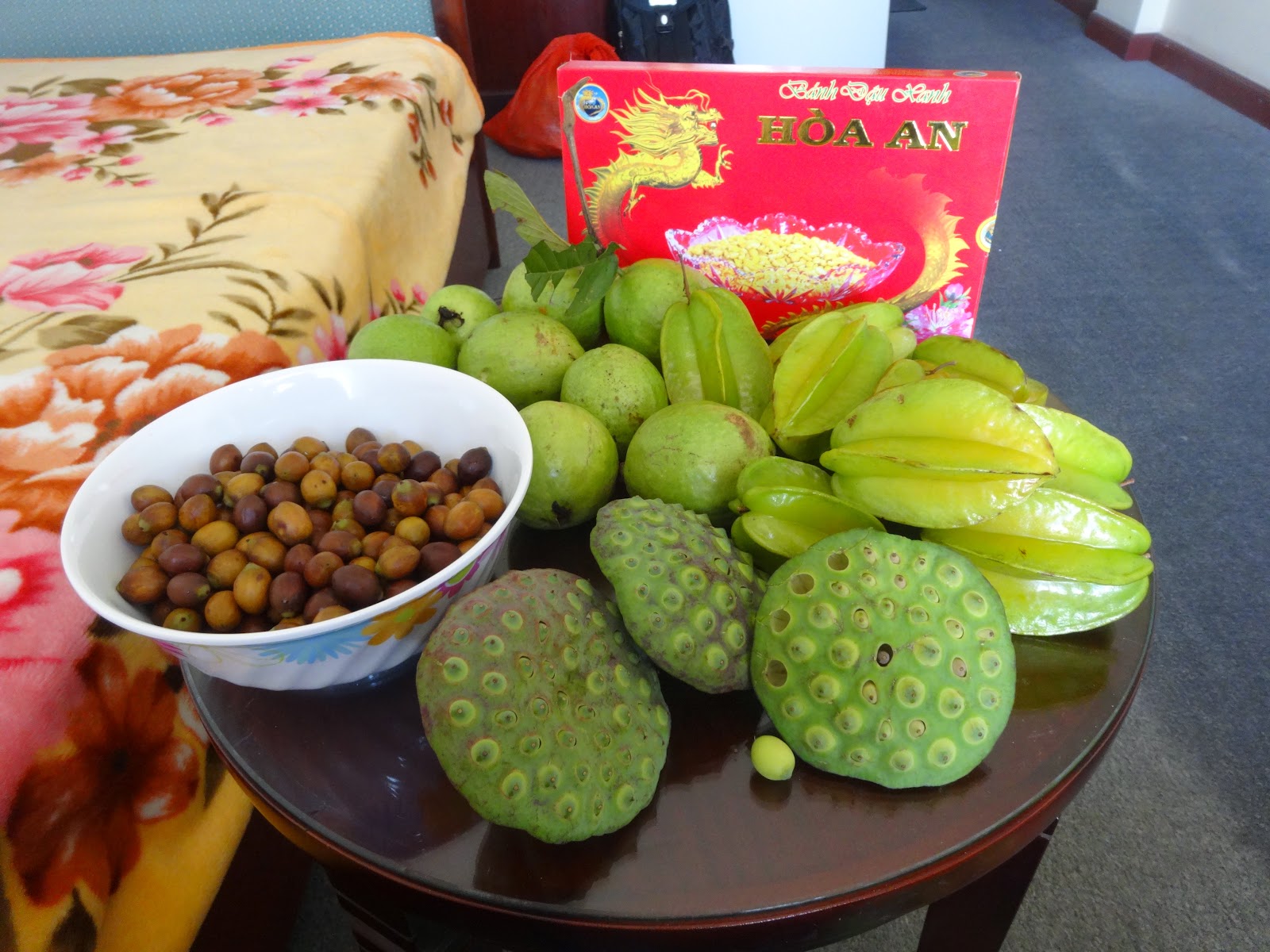 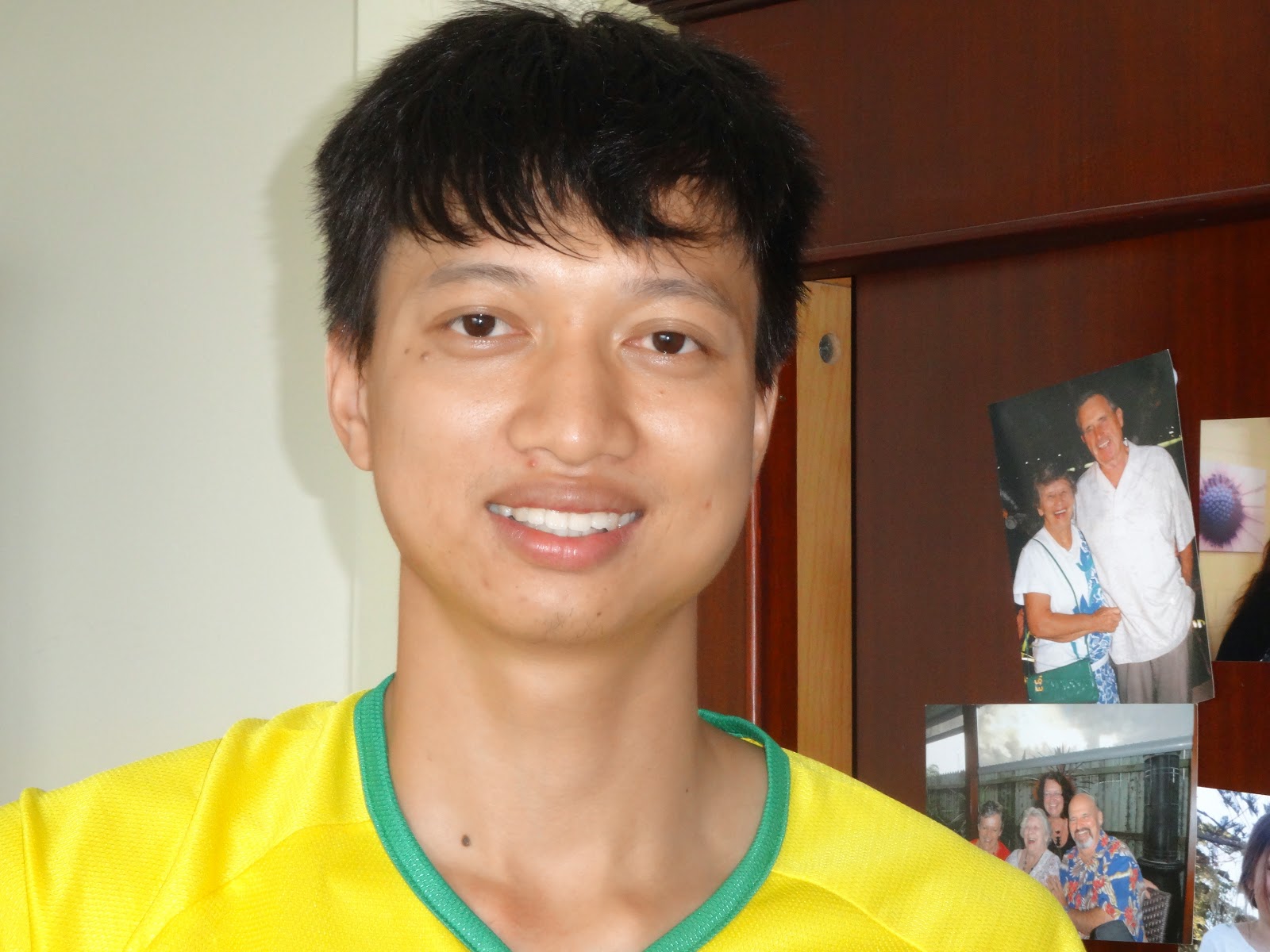 Tuyền is currently doing an English course and is working hard, holding top place in his class. Future employment prospects will be rosy if he continues to do this well.   He stayed for long enough to play a few rounds of "Pass the Pigs", before heading back to his hotel to study some more for the next exam.

Hiếu called to see if I had any plans for dinner - and I didn't, so we went out for phở bò, then went to the top floor of H-Tower. It was a clear, balmy night and the view was spectacular... 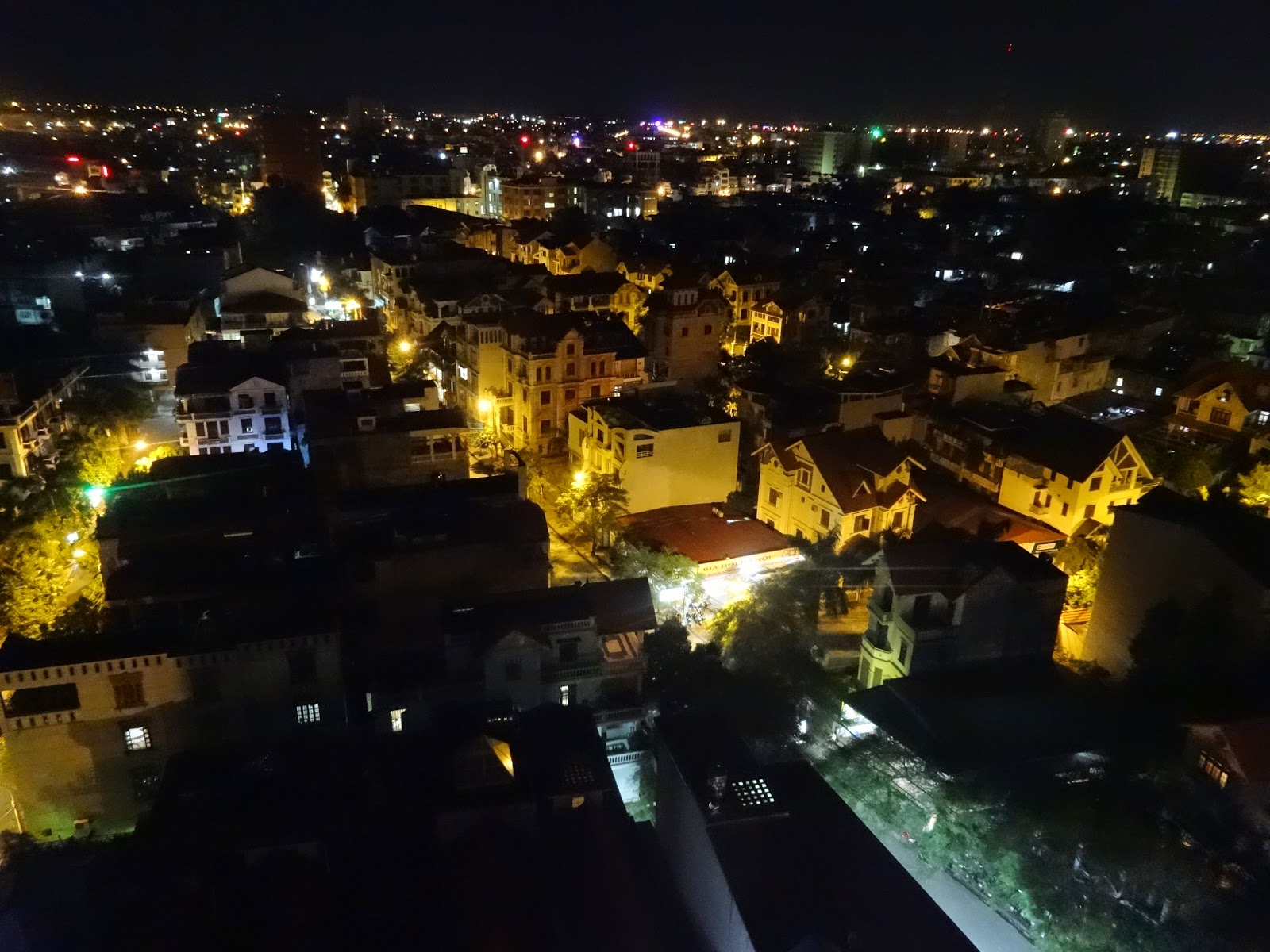 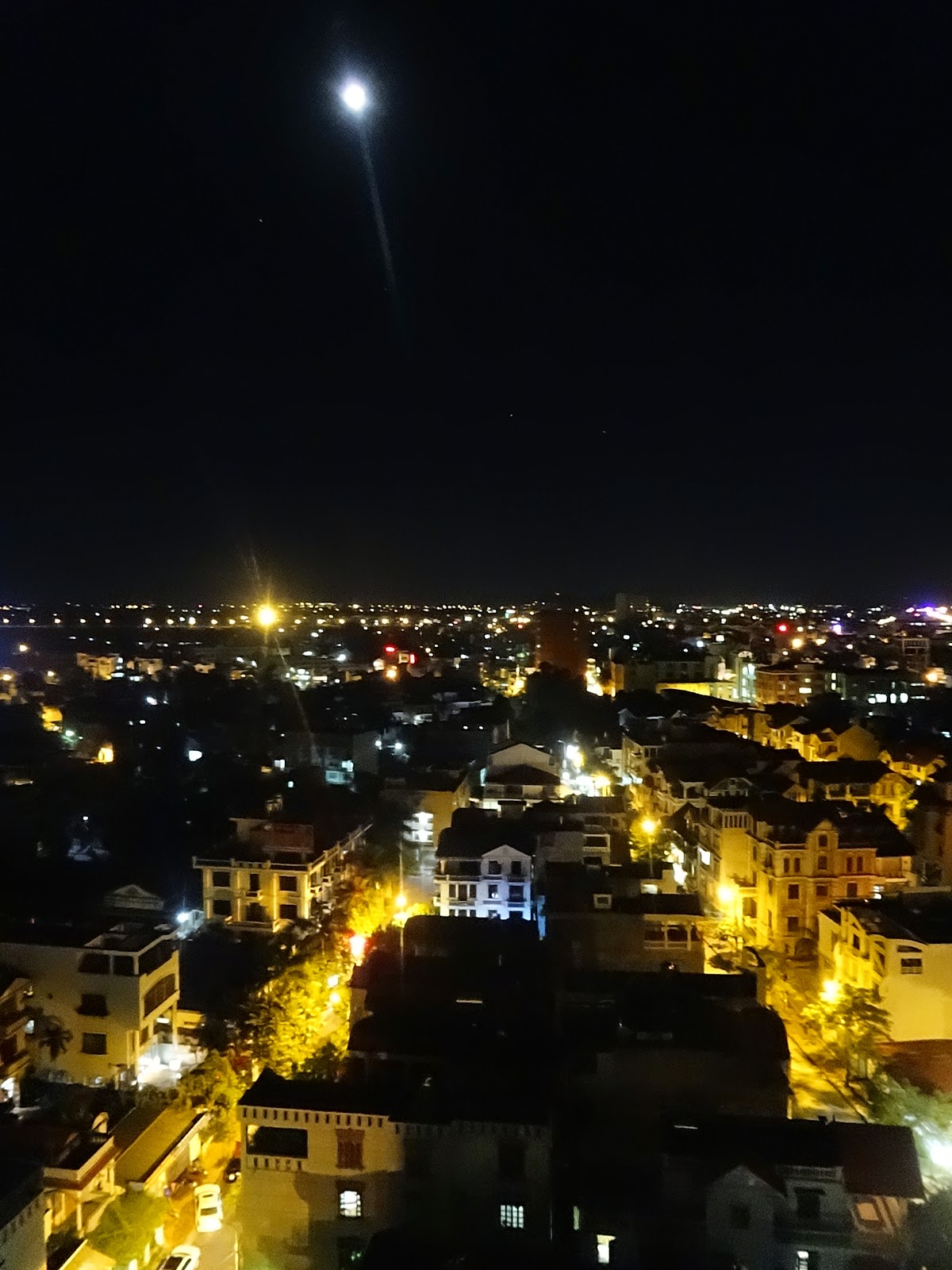 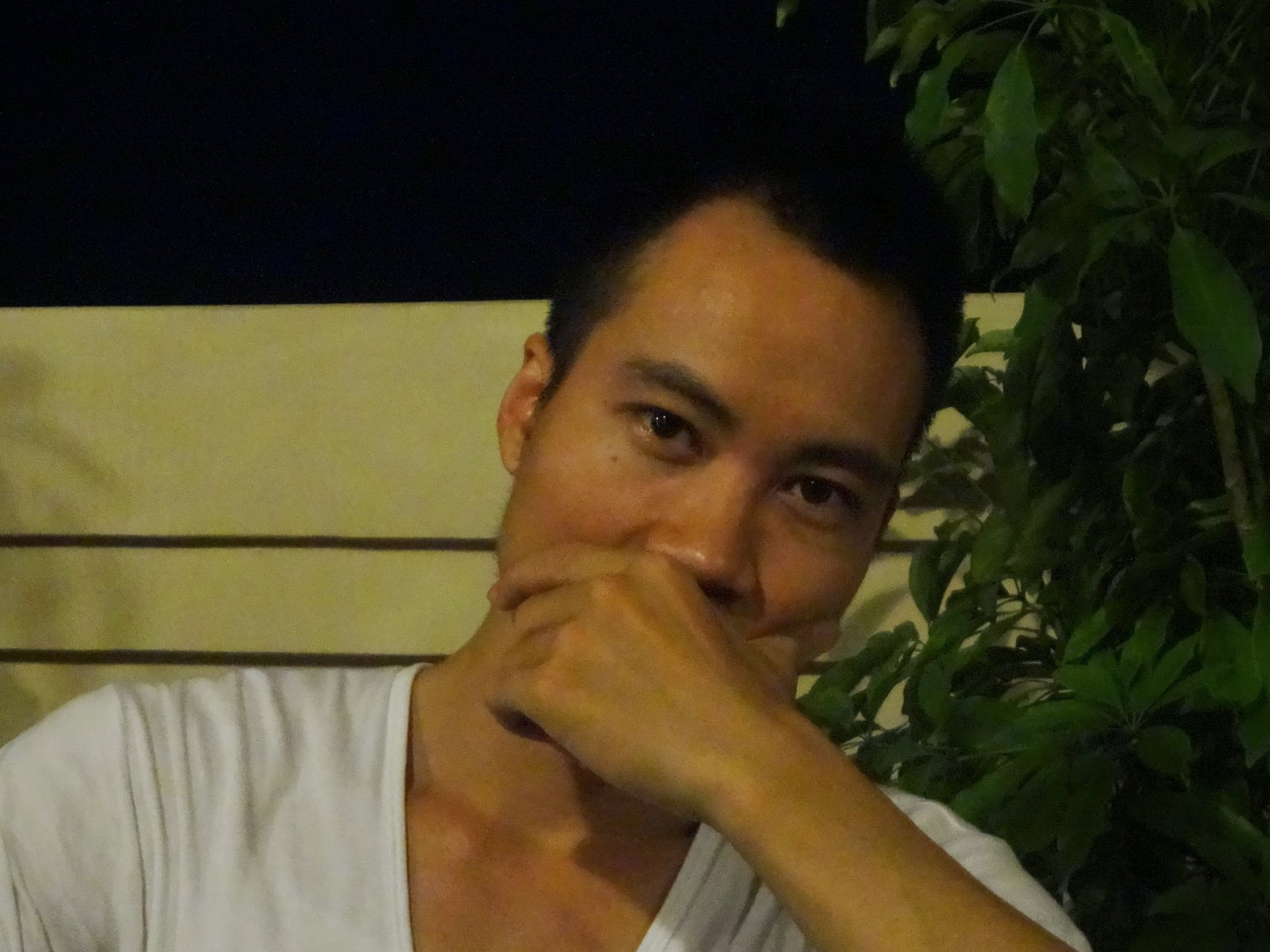 Luyền (Nellie) was working, so she couldn't join us for dinner, but she met us up there. She's so beautiful...always was a hard worker. It was lovely to see her again, even if only for a short while tonight. 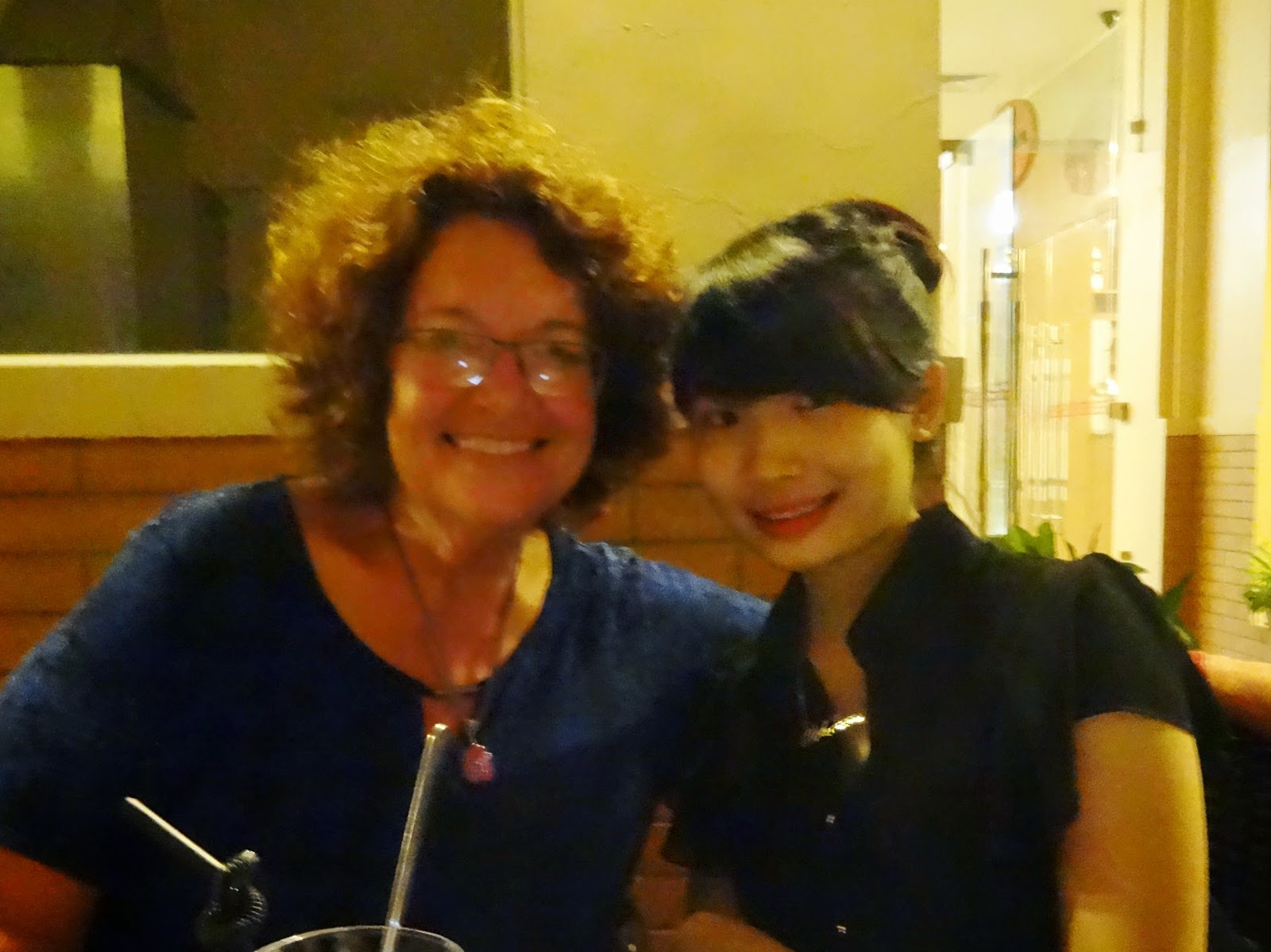 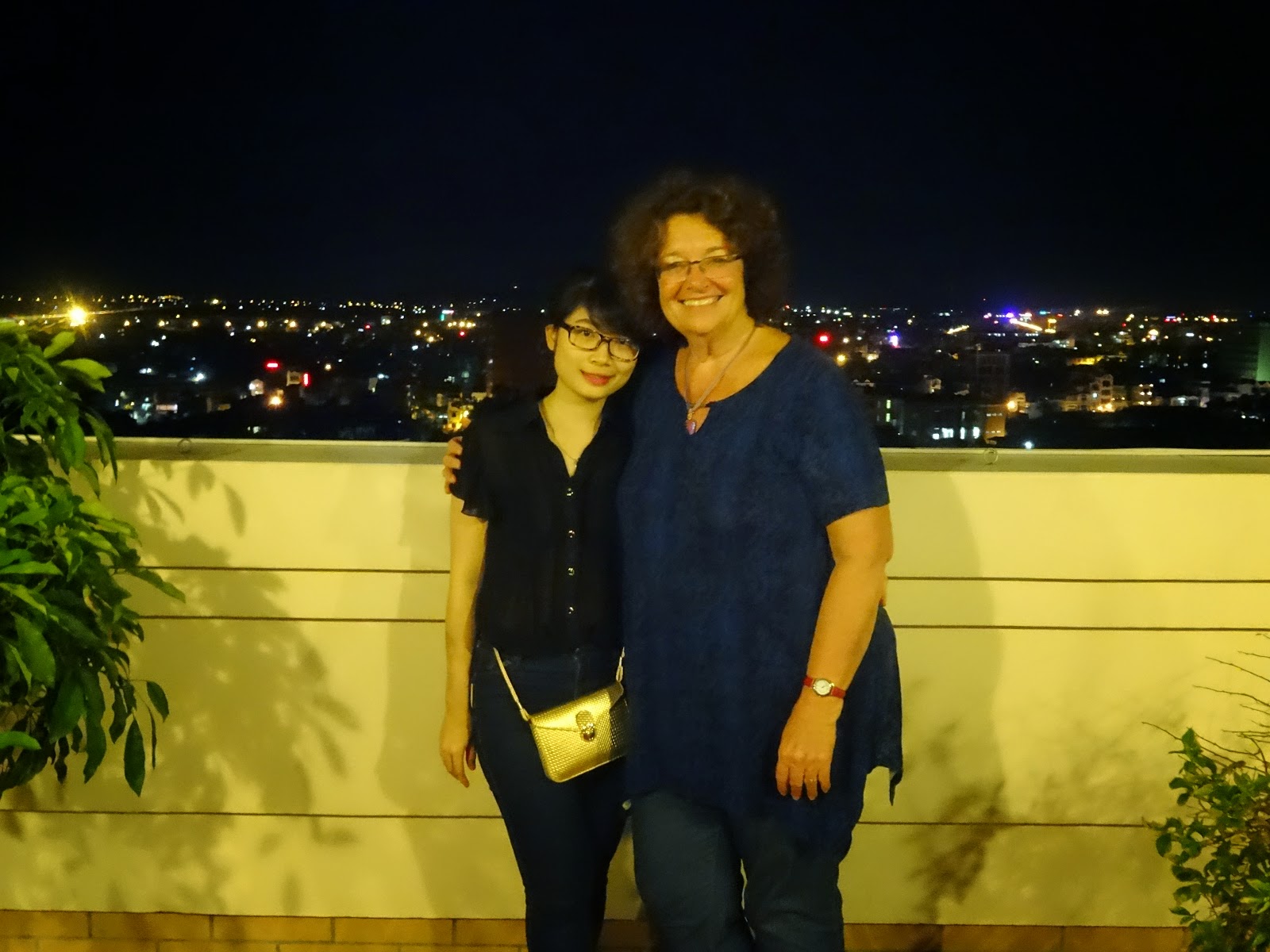