Two Đạts in one day!

This morning I finally caught up with Đạt !! (Xuân and Lan's brother). I had a free day and he too was free, so he came to visit me.  I was so busy chatting, I forgot to take his photo!  But he looks much the same, of course... different hair style, that's all. LOL.  Next time I see him I'll make sure I get his picture and add it to this blog!  He is currently unemployed, but is keeping busy and hasn't neglected his English study. His English is very good now, so I pray he will soon get a job with an International Company where he can continue to develop his English skills.

Nguyễn Quyết Tiến joined us mid-morning and after a bit we started playing Tenzi... and it was great fun as usual.  Đạt was very quick! Stealzi was the big hit and we laughed a lot. At least by then Tiến and I mangaed to win a few games!  We decided to go for lunch and Tiến suggested a good restaurant in Cầu Dất Street - Dắc Lợi. When we got there I realised it was the same restaurant I came to on Saturday night with Xuân!  It is very popular and got very crowded while we were there 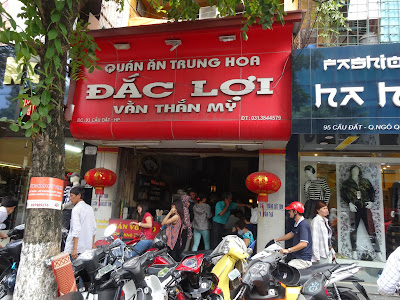 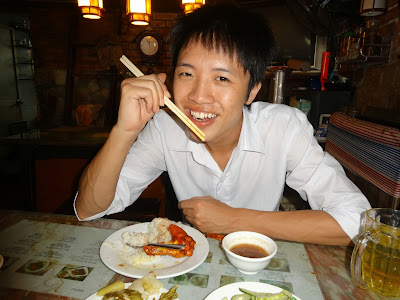 This time we had chicken and rice. Looking at the plates full of food streaming out of the kitchen made me wonder how many sacks of rice they must go through every day? At least a hundred people must have eaten in the time we were there... and it isn't a big restaurant, but they pack 'em in!!!  Tiến invited me to his hometown this weekend. I am really looking forward to that... can't wait!!!

Later in the afternoon, Hùng came over before his Kung Fu practice.  Then I had the pleasure of talking to Bailey on skype about how well she did at her school assembly. She was very excited about talking on the microphone twice. Then she told me that she is going to print off and award for her teacher: "To Mrs Freeman ... a special award for being a great teacher and trying really hard not to get angry when you have a headache"   How hysterical!!!! I'm still chuckling as I write about it...   (Bailey is 7 years old)

I didn't have any classes tonight, so I had arranged to have dinner with Khang, and that's when I got to hang out with another Đạt - Khang's 'brother'

Nguyễn Tuấn Đạt - along with several others....

First up, we met them on Quán Nam Street where we shared iced tea and snails. 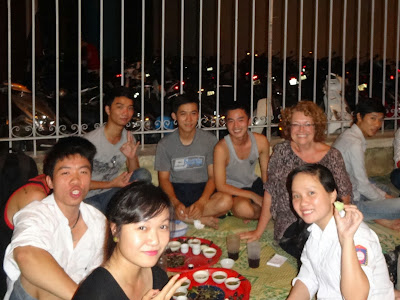 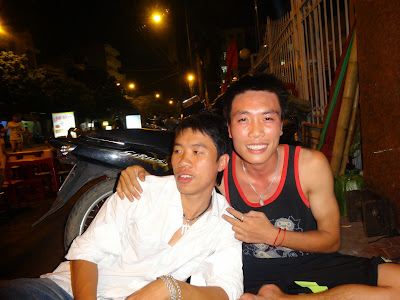 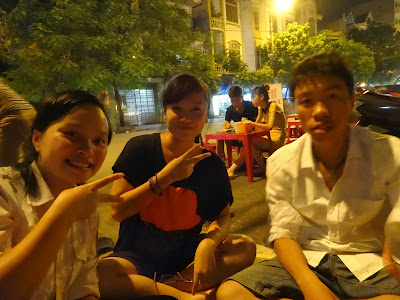 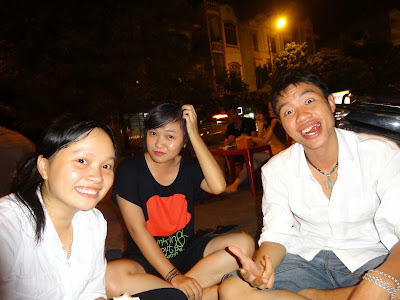 It was getting late by the time we decided to go and have dinner, and they suggested Hot Pot... so we hopped onto the bikes and headed off... and ended up at the restaurant on the corner of 302 Văn Cao - not far from where I used to live!!!  Although I walked past here hundreds of times, I rarely ate here and had never had hot pot - for that requires a group of people and I usually passed by on my own.  So it was especially nice to eat there tonight with this beaut group of new friends... 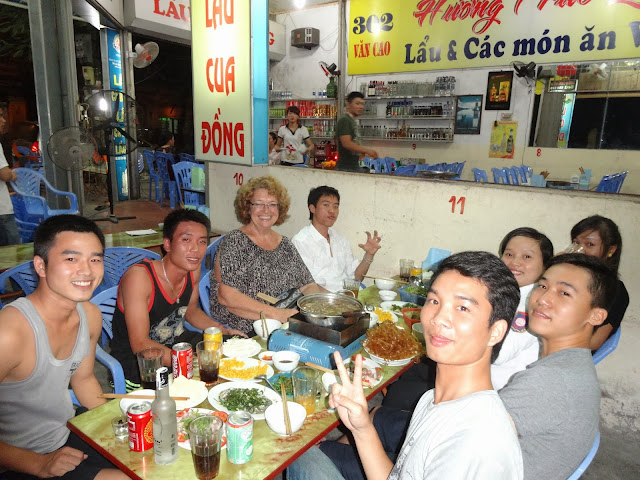 Hùng Con, Đạt, me, Khang (he's always pulling funny faces in photos), Trang, Mừng, Thinh, and Hùng To.  I get to watch the guys dance tomorrow night in a competition.... looking forward to that!

At one stage, Thinh, whose English is good, commented that I speak very, very slowly - like I'm almost asleep! I explained to him that is so those in the group who are not good at English can understand what I'm saying. Then I spoke to him at normal speed and he realised how very different that sounds! After that he was happy to listen to me speaking slowly!  Haha. Most importantly, it encourages the ones who aren't confident to talk to me. Many people here assume that all foreigners will be difficult to understand because we tend to talk so quickly... so it's nice to challenge that perception.

Đạt began the evening telling me that his English is not good, but we soon struck up a conversation that flowed easily. He kept putting food in my bowl and we laughed as I tried to chew the pig's intestine - lợn.  Truly, it's like rubber!

Hot Pot is a great sociable way to eat because it can't be rushed and the broth just gets tastier and tastier the longer it goes on.  It is not uncommon for people to put food in my bowl... Tonight Đạt gave me a small round thing that looked a bit like a deep fried egg and I knew that it was probably a baby duck egg - very popular here in Việt Nam... and sure enough, as soon as they all insisted that I should just close my eyes and eat it, I knew that's exactly what it was - a fertilised duck egg with a half formed baby duck in it!  I did have a go... It fell into two halves, one side was the yolk, which tasted pretty much like a normal hard boiled egg yolk. the other side looked a white congealed mass not unlike a normal egg white with a few veins running around it. So I dipped it in the sauce and ate some... not unpleasant.. but then I looked down and there in the middle of the white mass was this wee tiny duck head, beak and all !!!!!!!   Nooooooo! It was about 1cm long and after that there was no way I wanted to eat it, no matter how good it might be for my health!  LOL  But I didn't waste it - I gave it to Khang  Haha.

Eventually we were all full and it was late, so Khang gave me a ride home.

Something a bit interesting... I was very impressed by the beautiful spiral braid in this girl's hair. I just had to take a photo to show Katie... 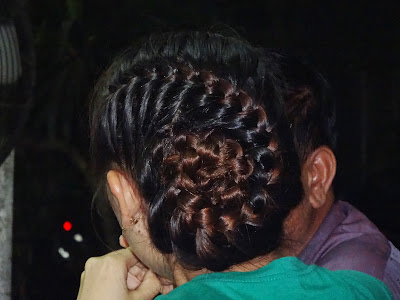