It was a bit of an effort to get up and go for a walk this morning after only five hours sleep, but it's a habit I want to maintain, so no excuses... unless it's raining, or a Sunday  haha.  There were four of us again this morning and with good company it's a very easy way to exercise!  But I must admit, after I cooled off and had a shower, I went back to sleep for two hours!!!

At 10am Tuyền came and picked me up and took me back to his place so he could cook me lunch... what a treat! Firstly, we went to the market to buy the fresh ingredients - green vegetables, garlic, onions... then we headed for the meat section and bought from the duck lady all the bits we throw away in Australia - the guts, liver, heart, lungs, intestines etc, as well as the blood. Next was some pork from the meat lady. She has this great machine that either minces or slices it finely. 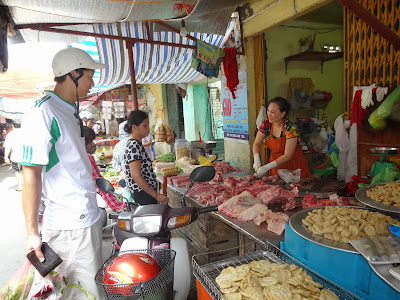 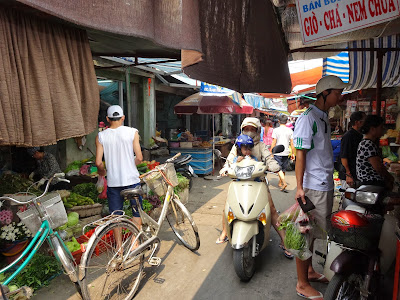 This is the same market that I went to two years ago and that crazy guy crashed his motorbike after he freaked out when he saw me... but at that time it was late and closing so there weren't many people around. Today it was bustling with activity... so many more varieties of food than I've seen in the smaller markets near here. 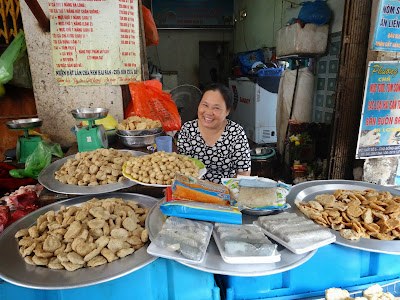 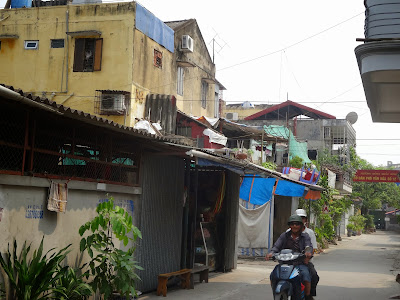 This building is the parking station for motorbikes near where Tuyền lives. It would not be safe to leave a bike unattended, and the streets and lanes are too narrow to accommodate parked motorbikes anyway.

Huy was waiting for us back at Tuyền's room and we sat down and cleaned the vegetables while Tuyền prepared the meat and chopped everything. The rice was already cooking and once all the ingredients were ready, it didn't take very long to cook it all. 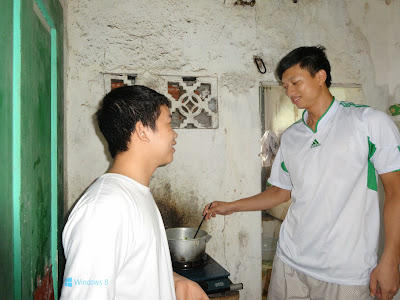 While they were doing that, I took photos and talked to the neighbours. 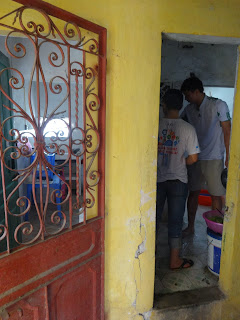 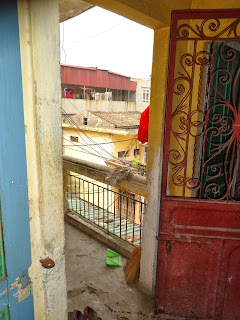 Thành, who lives in the two room 'apartment' next door, was very friendly. He is a third year medical student and his English is very good. Both his parents are doctors and live in Hà Nội. He shares this suite with just one room-mate - a bit of a contrast to the room next door where three (and soon to be four!!) students cheerfully share just the one room. Thành has an absolutely beautiful fish tank. He has a variety of tiny delicate fish and has created an underwater garden that is unlike any I've ever seen. Wherever you look, there's a surprise, with many different plants. Because the fish are so small, they do not destroy the plants as I've seen in so many other fish tanks and this is an exquisite garden in the making. 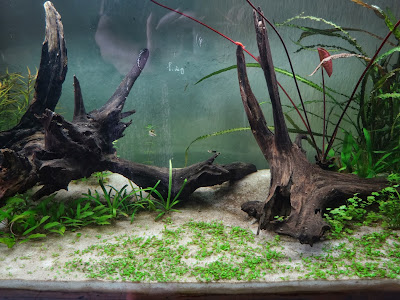 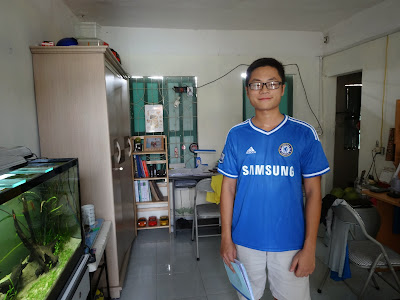 I was intrigued by the lumps of concrete on the roof below the balcony rail (and the rubbish...). When I asked him about it he laughed and pointed out that the building was old and crumbling and they were actually pieces from the parapet!!  As for the rubbish?... well they weren't his clothes... 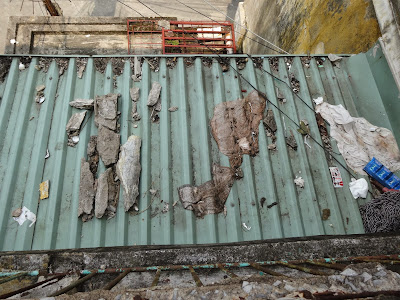 In stark contrast, just off to the left was this delightful little balcony with thriving pot plants.   Việt Nam certainly is a land of contrasts... 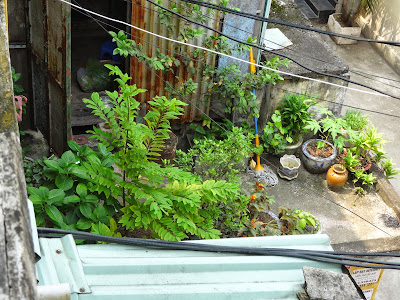 And this was our delicious lunch. Tuyền laughed when he told me that before he was a student, he didn't know how to cook. His mother and sister did all the cooking while he played computer games, watched TV or went out with his friends... typical for most Vietnamese boys. I'm glad to say he has learned well! 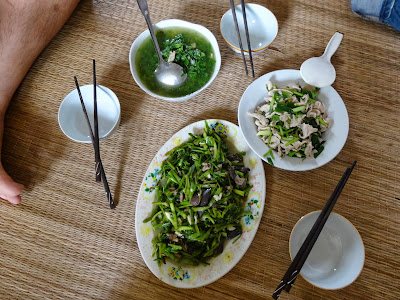 After lunch, Huy gave me a ride home and I had some time to blog, email, and check facebook. Katie came on skype just as Tuấn Anh and his friend Công arrived for a visit.  She is enjoying the school holidays with the kids now that she is free of University assignments for the Summer, so I don't get to see her on skype very often now.

Tuấn Anh and I introduced Công to Tenzi and we played for ages. It's such a fast, fun game you don't notice the time.  Eventually I remembered my manners and cut up some fruit and Moon cake. Tuấn Anh was pleased, for he had been so busy finishing his Report he missed out on having any moon cake this year.  He had a great day on Thursday - firstly, he scored an A defending his Report, then his plans for his girlfriend's birthday went off perfectly. He's such a romantic!  Thảo is a very lucky girl! 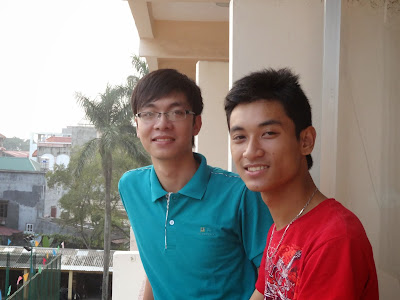 Although he didn't say a lot, Công understood most of what we said, so next time he will speak more so he can practice his English and learn more. It is so important when learning another language to keep trying to speak it, even though you make lots of mistakes. When I'm hanging out with my friends here, I automatically correct their mistakes so they can improve... and it is certainly paying off for them.

After Tuấn Anh and Công left, I decided not to go out for dinner, but headed downstairs to the Hotel kitchen to boil the eggs I bought during the week. 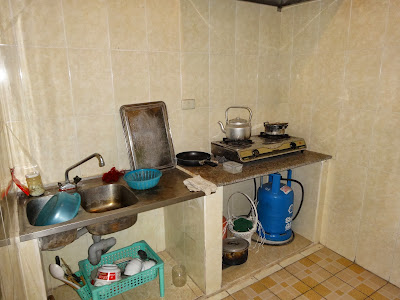 While I was waiting, Lee came back from a shopping trip. She had found some gorgeous blingy shoes that she couldn't resist and they are fabulous... lucky for her, she has small feet! It was nice to chat with her while I waited for my eggs to cook. My dinner was a simple salad with eggs back in my room. I don't go to much trouble here... but that's OK because I get to enjoy other people's cooking nearly every day!  LOL