Hellos, goodbye and a soccer match

John and Melissa have returned to Hải Phòng after a week in Beijing and another in Sapa. I caught up with them after work at Josie's favourite street bia hoi restaurant. It's on the corner just down the road from VAIE and is popular with ESL teachers. There is usually someone here to chat to later in the evening. 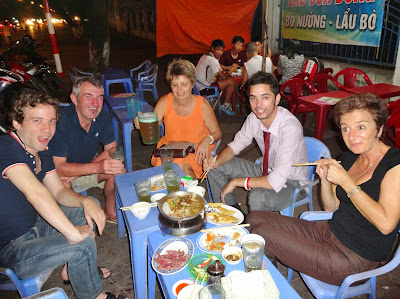 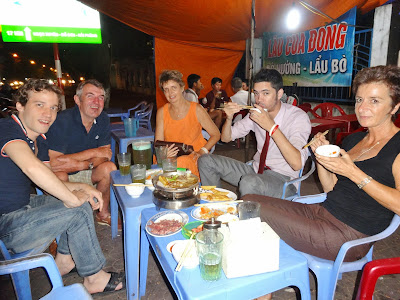 Roland (from France), John and Melissa (Aussies), Andy (from the UK) and Josie (another Aussie).

The next day, I called Mr Cường and he took me to the 'Finnish Village' where John and Melissa have a lovely apartment and I enjoyed lunch with them. They have done a lot of travelling during their time here teaching, with holidays in the Philippines, Malaysia, Thailand, Cambodia and China as well as parts of Việt Nam so when they return to Australia at the end of the year they will have many great memories.

This week the Wednesday ladies had lunch at a new Indian Restaurant on Văn Cao.  More new faces ... 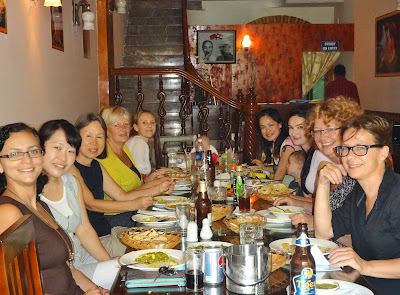 Cristina from Brazil, Youejung and Barbara from Korea, Maritha from Sweden, Marina (and you can nearly see her baby, Antonia) from Romania, Seaoqing from Korea (her baby, Naut, was asleep in the stroller), Agata and Szymon from Poland, me, and Jutta from Germany.  We're a veritable United Nations!

On the walk home after a very pleasant lunch, I stopped off at the market and bought my usual cucumbers, tomatoes, carrot, scallions and eggs. The ladies and I laugh a lot - today we managed to compare ages... LOL

Graham's wife Lee has arrived. She has retired from her job as Manager of a Women's Prison in Victoria and has now joined him here for a twelve month stint teaching at VAIE. They live here at the Star Hotel down the hall from me and since she was scheduled to sit in on my class on Wednesday night, we walked to school together. Now the weather is a bit milder, it's a pleasant walk and a great opportunity to talk and get to know one another. 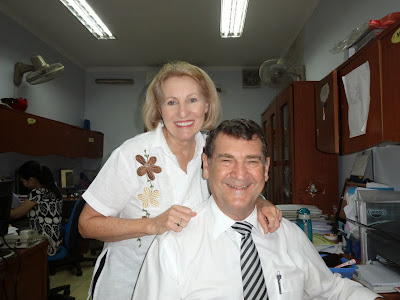 And this is Claudine, another Aussie teacher 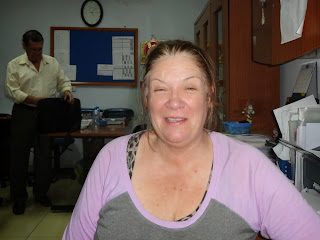 Friday was the sad goodbye. Jessica has been a much loved teacher at Nam Phap Church class over the last 10 months, but unfortunately she was injured in a bike accident a few weeks ago and has been unable to get the medical treatment she needs, for she has been in a great deal of pain and has been unable to walk. So she decided to return home to the USA and will fly out on Tuesday. On Friday morning Tiên brought her to Jutta's class so she could say goodbye and the students could say thank you. I was a shock to see her in so much pain... it is good that she is headed home.  One last group photo shoot and she had to leave to go back to the hospital for results from today's CT scan. 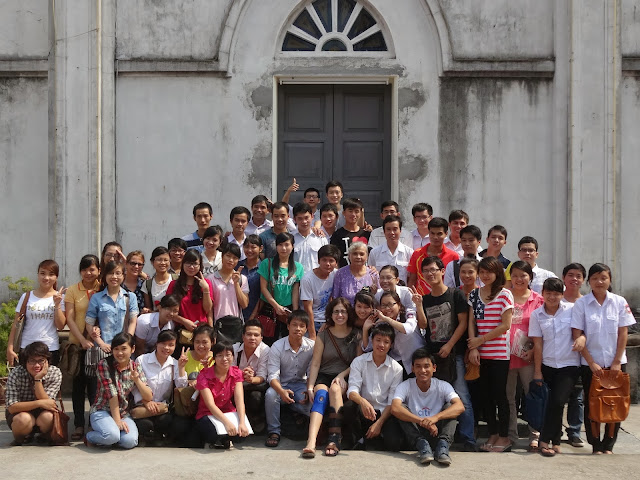 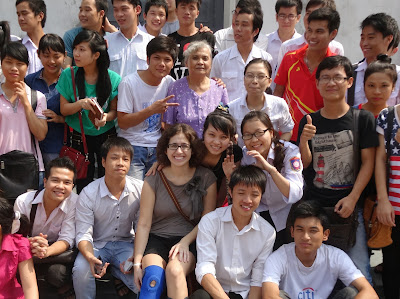 Jessica Kokos will always be remembered as one of the treasured teachers of these beautiful students of this English club, and I have no doubt that she will always cherish the memories of all the wonderful times she has enjoyed with them, too. It's a shame she had to cut her time with them short. 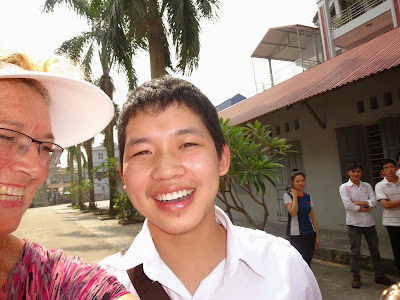 At 3pm, Tuyền came and picked me up to take me to the Stadium so I could watch my first Soccer match. We caught a taxi and met Huy there. The match was between Hải Phòng and Vĩnh Long, a team from the south. It was the Semi-final of an Under 21s tournament that has been going on here for the last two weeks.

It has been busy here at the hotel, for we have had a team from Hà Nội staying here - on my floor. They are an exuberant bunch!  Several times over the first few days after they arrived I would get vigorous knocking on my door and someone trying the handle, so I would go and open the door.. The looks of shock and stunned surprise on the faces of the guys when they saw me, not the team-mates they were expecting, was priceless!! That team has made it to the Grand Final on Sunday.

Anyway, there wasn't a large crowd (4pm on a Friday afternoon)... 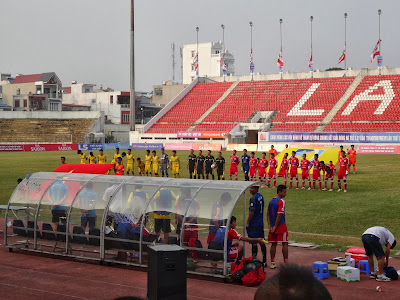 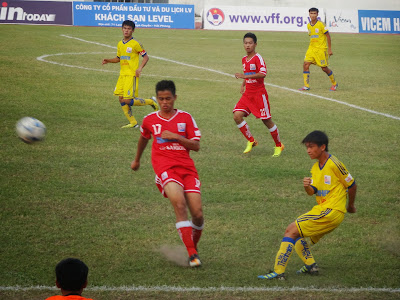 The stand opposite was filled with rowdy Hải Phòng Football Club fans. They had huge drums and a trumpeter and the cheerleader was an energetic man in a gold suit... 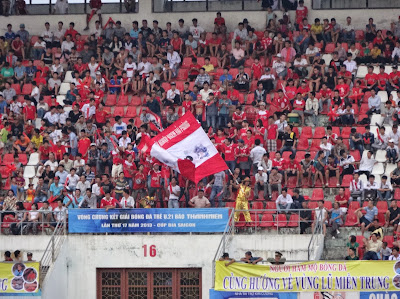 We were outplayed in the first half and the score was 1-0 against us... but the tide turned after the half-time break, and Hải Phòng scored an equaliser 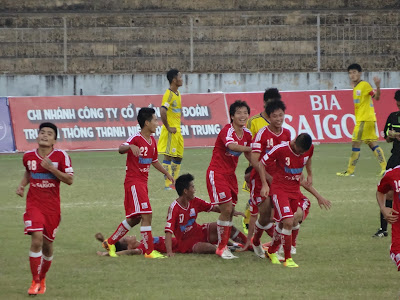 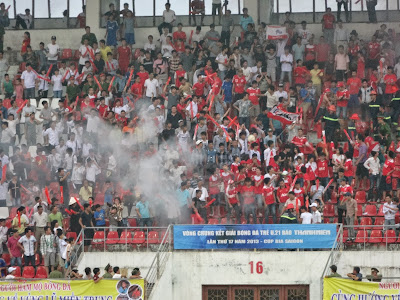 I missed photographing the fireworks ... an awful lot of flame - no pyro-technic protection here to spoil the fun...!    Although we dominated in the second half, the boys just couldn't find the net, so the match was decided in a penalty shoot out. 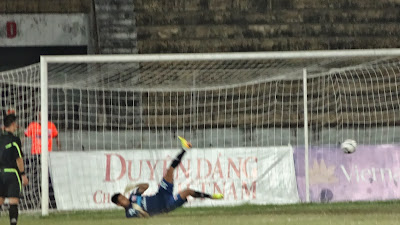 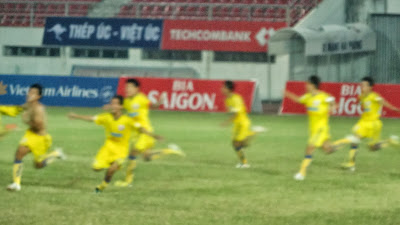 It was only 6pm and I didn't have a class till 7:30pm, so Tuyền and I decided to walk  back to VAIE - it's only about 3 km and the evening was balmy with a nice breeze. We stopped off for dinner on the way - at Bekki and Gene's favourite Kebab stand near the War Memorial for Bánh Mỳ Chú Béo. Neither Tuyền nor I had eaten there before, so it was a first - and delicious enough that it probably won't be the last time... 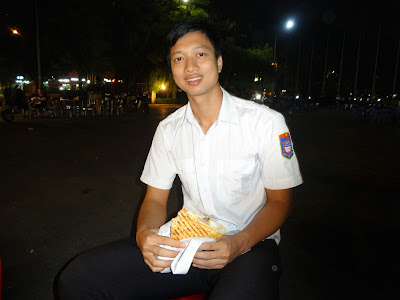 It's like a big toasted sandwich with Pork kebab and coleslaw..

My class finished at 9:30 and I walked home as usual in time for visitors!!!
Tinh and Xuân came by to see me. Tinh was passing through on his way to visit his hometown and arrived in town late. It was great to see Tinh again, He is still working at Mông Dương, in Quảng Ninh Province, so he doesn't get to Hải Phòng very often. We sat downstairs so Ủy could join us and discussed the future of Isagenix in Việt Nam. It was very late by the time they came upstairs and I took these photos... considering it was midnight after a very full day, I reckon we all look pretty amazing!!  LOL 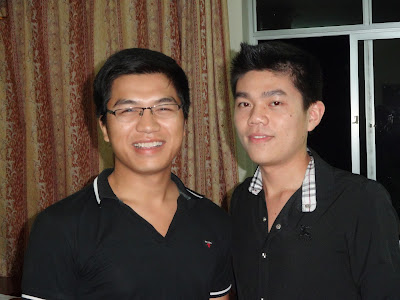 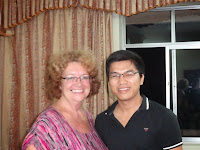