Hải Phòng has been buzzing this week as the Lion Dance teams hit the streets, celebrating the Mid-Autumn Festival.  People keep telling me it's for the children, but everywhere I looked there were plenty of adults enjoying the spectacle. Spectacular costumes, very athletic dancers and enthusiactic drummers... it's noisy and a lot of fun.  This year, I was taken to see lion dancers four nights in a row!!
Actually, as Xuân pointed out, they aren't 'lions', but 'unicorns' - mythological beasts with a tradition dating back 3,000 years.  I thought it was very interesting that when I enquired inclass about the festival, I was informed by my students that Uncle Ho introduced this festival for the children.  Hmmmm.
Anyway, on Thursday, Ba picked me up after my class finished and we went into town. He took me to a cafe that has a reputation for the best bánh mì cay in Hải Phòng. 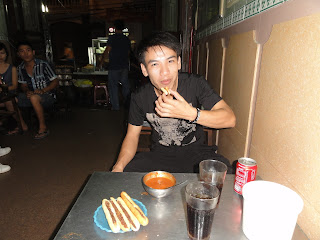 This random guy came over for a photo when he saw my camera out... only in Việt Nam! 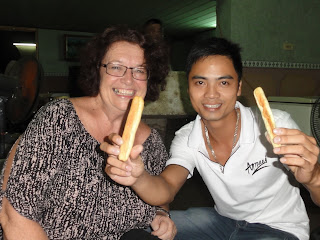 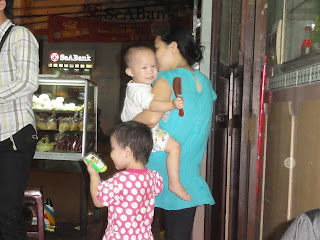 This little girl (her family obviously lives here) kept running up to me calling me Bà Tây (Western Grandmother). She was very cute, but turned away every time I tried to take her photo. After the snack, we rode through the city centre, stopping at traffic jams to watch dance teams. It's really something... wherever a dance team sets up and starts performing, people stop to watch and before long there is a complete traffic jam of motorbikes spread right across the road from people having a sticky beak.

Then on Friday night I had the night off work to go with Gene and Becky to watch their neighbourhood festivities. Xuân came too. A stage had been set up on a vacant block and a crowd of happy neighbours gathered to watch some little girls dance and sing, and a lion dance team came roaring in on motorbikes. They danced and gyrated to the delight of the crowd. 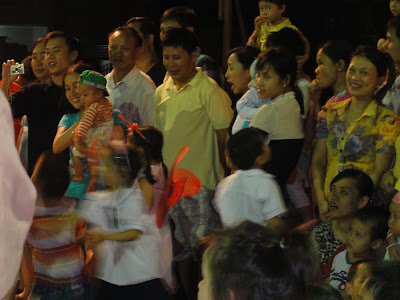 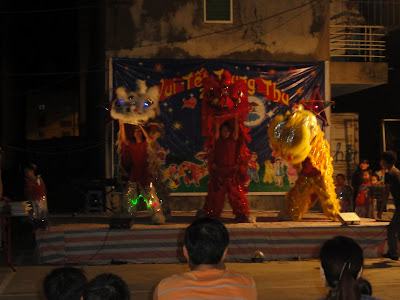 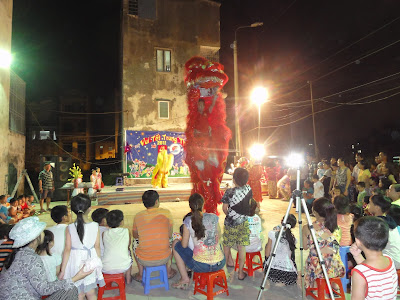 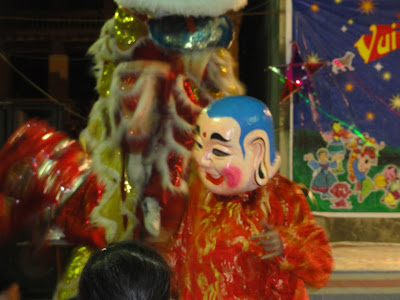 Then my camera battery went flat so I don't have pics of the girls in their gorgeous costumes, or the tiny little kids running around with lion heads on....  pity.

On Saturday night Sáng picked me up after I finished work and we met his sister, Mung and his mate Tú at the fountain in town. 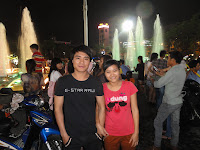 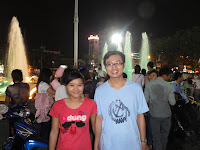 The square was packed and loud with the rhythms of the drummers from the various teams performing all around us. We pressed into the crowd surrounding one team and I tried to take photos but they aren't very good... 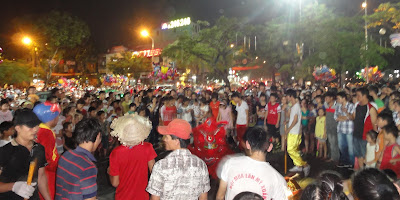 Check out the crowd!! 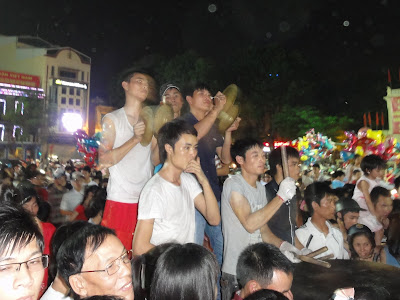 The drummers stand on a wagon and really raise up a sweat as they dance to the rhythm and the guy on the big kettle drum works the hardest of all... there is usually a back-up or two ready to take over without breaking the rhythm when he needs a breather.  They are pretty amazing... they play for hours.

This team also did some fire-breathing. You can see the guy's mouth on fire in this photo... 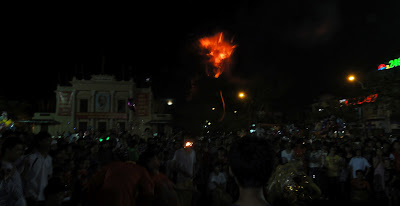 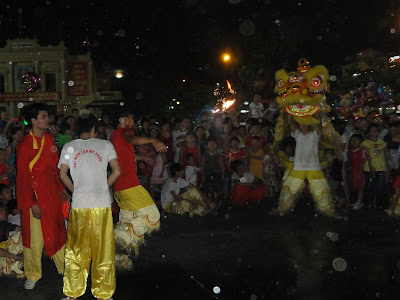 ...and can see the spots of petrol on my camera lens in this photo taken shortly after.

Again, I didn't manage to get any really good photos, but it was all fun. One thing that really impressed me was the behaviour of the huge crowds. Nobody seemed to be impatient or bad tempered, nobody was drunk, everyone was happy and it was such a joyful family event.  Radically different from community events down at the Jetty in Coffs late at night!

On Sunday morning, Hoàng dropped by with this special moon cake that his mother had made.... talk about delicious! 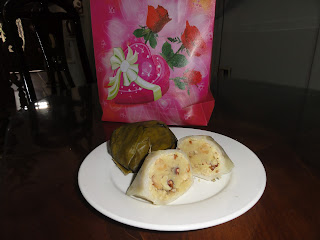 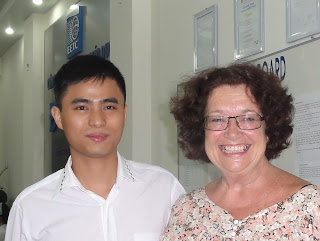 This is Hoàng.
Sunday was the actual night of the full moon, so it was the last day of the festival. Beautiful Thái picked me up that evening and once again I got to experience the excitement of the crowds, the traffic jams and admire the athleticism of the lion dancers. She took me to Big Man Restaurant, where a team of 8 or 9 lions were performing. 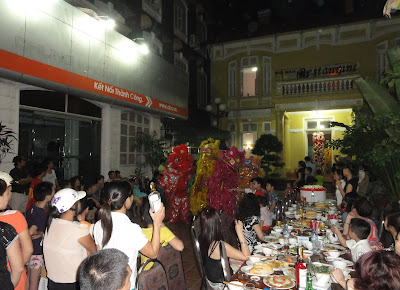 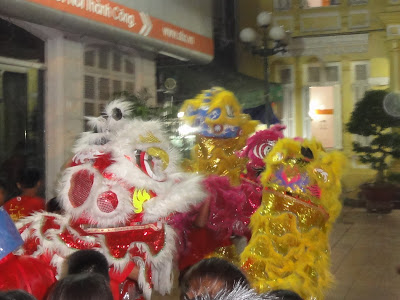 All night there had been a guy up on the balcony waving money at the end of a long pole... just out of reach of the lions. So for the finale, the dancers formed a three tier pyramid and the red lion grabbed the money, much to the delight of the crowd. 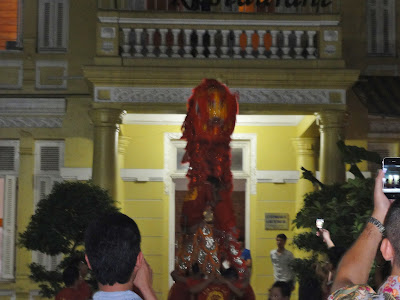 Shame the photo's not the best, but you get the idea... he's a long way up and at full stretch grabbing at a moving target with no safety net, just concrete to land on if he lost his balance. These dancers are very fit and strong!

And so ended the week!   Fabulous.