On Gene's advice, I got up at 6am to see monks from the various monasteries processing through the streets with food bowls while people knelt, gave them food, to receive a blessing. 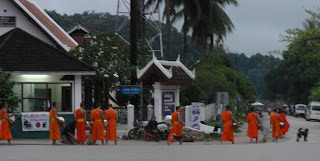 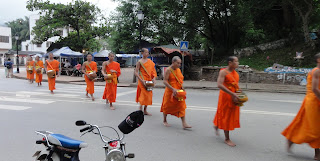 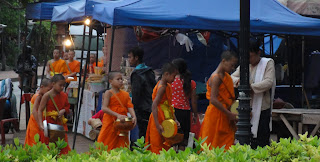 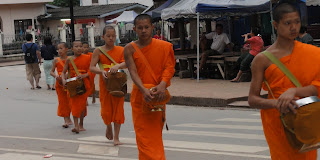 Every morning hundreds of monks go out at dawn to collect alms. 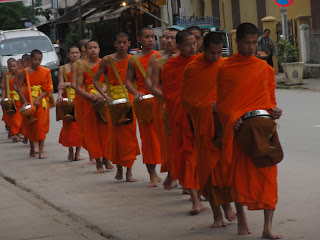 After breakfast I went for a walk to go and see the Royal Palace Museum. Until the communist takeover in 1975, Luangprabang was the royal capital and seat of government of the Kingdom of Laos, so they've converted the old palace into a museum. By the time I got there it was 11am and they were refusing entry (like most official places in this part of the world they close for several hours during the middle of the day), so I only got to check out the grounds... 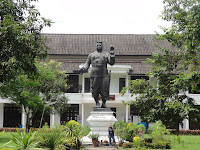 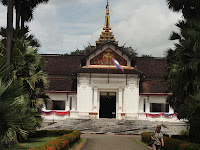 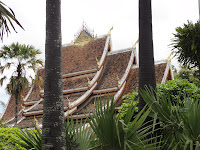 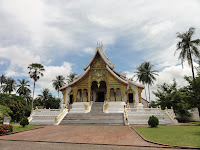 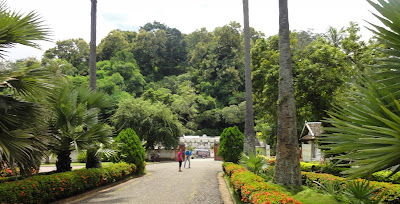 The city is well known for its numerous Buddhist temples and monasteries and one of the major landmarks in the city is a large steep hill on which sits Wat Chom Si. Apparently the sun setting over the Mekong is a memorable sight from that vantage point, but we always seemed to be doing something else at that time of day, so I'll have to climb the 300 steps to the top and check it out next time I come here. That's the hill in question at the end of this avenue leading away from the old palace.
I did, however take a walk around this temple and it's extensive grounds. 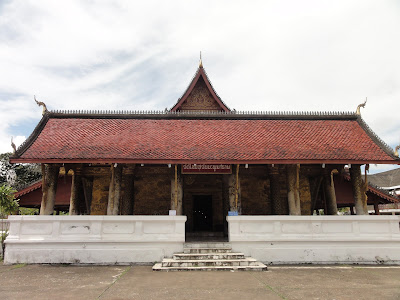 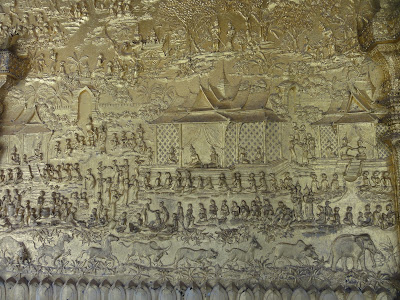 The gilded bass relief carvings on the front walls were very impressive, depicting many aspects of daily life from times gone by. 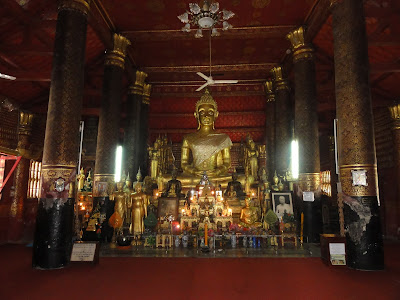 And inside the temple everything was clean and prosperous looking... all made of marble and beautifully carved timber with a plethora of golden statues. 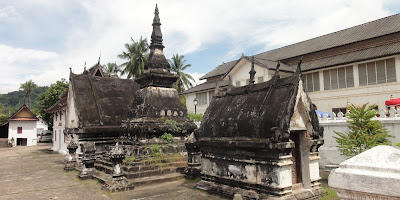 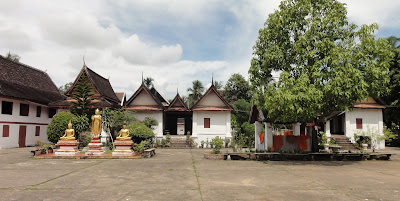 These buildings are dormitories for this monastery.
This was by far the hottest day we'd had, so walking around ceased being fun by midday. I met Gene back at the hotel, then ducked across to road to Joma's (!) and bought us some lunch and we finished our packing and rested for a while before it was time to go. 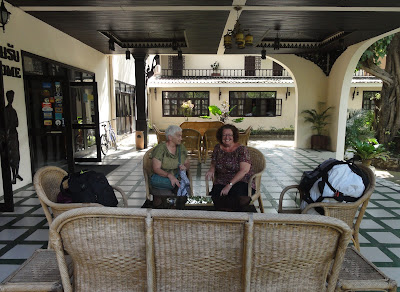 Waiting for the car to take us to the airport...

We got to the airport with time to spare and Gene organised herself a wheelchair... Even though she trecked through the jungle with that broken foot, she cannot stand still for long (like in queues) so her doctor had ordered her to use wheelchairs in airports. Of course, that translates to preferential treatment, so we were escorted through whenever it was time to move (sweet!). Sadly it didn't include leniency when it was time to check my hand luggage. I didn't go over it thoroughly and had inadvertently packed two long silver hair pins in my hand luggage, not my check in luggage, so of course it had to be assumed I am a potential terrorist, and they were confiscated. I was spewing. They were my main present for Katie. Bloody jihad terrorists, ruining life for the rest of us..... 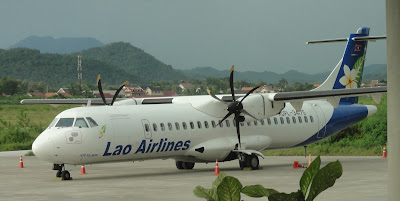 We were booked to fly with Lao Airlines, which is really nice, so this should have been our flight, but somehow we ended up on the Vietnam Airlines plane that departed a few minutes after this one...   odd!
So a final look at Luang Prabang 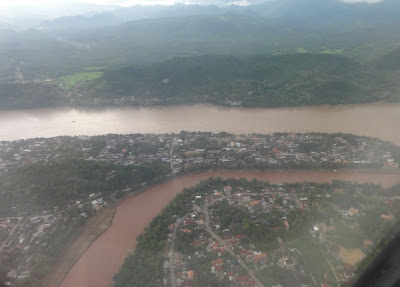 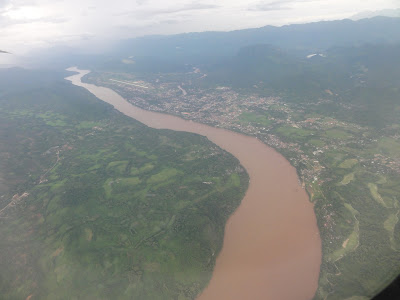 and we were back in Hanoi an hour later!  Again, Gene was given royal treatment in a wheelchair, and as we went to an immigration station with no queue (Diplomatic Passports) a young man came over and asked me if we were going back to Hai Phong.  Turns out he is one of my students from the seamen's class I teach at ISALCO shipping company each week! A company car was picking him up and he offered us a ride... How very kind!  We had already arranged transport, though. Gene has a Hai Phong taxi driver who she gets to transport her to and from the airport in Hanoi quite often, and he was already there, waiting to bring us home. It's a lot more expensive than taxi to Hanoi and then bus to Hai Phong, but infinitely easier, quicker and more comfortable!

We got back to Gene and Becki's at about 9pm and entertained Becki with tales of our travels over a beef sandwich Becki had bought on her way home from classes. Finally Becki brought me home on her scooter (bulging bags and all!) and I got to share the highlights of my trip with Toni.  Beaut holiday!