It's Will's birthday on Monday, but this is a holiday weekend in Việt Nam and he'll be going to Cát Bà on Sunday so he shifted his "wee party" to today. We started out with four of us at a Snake Restaurant called Quản Rắn Sờn Lâm . Will had heard all about it and was busting to go there before leaving. The story is that there are a couple of escaped cobras around the place and if you get bitten by one there is no immediate medical help so the chef will chop off the bitten bit to save your life - finger, hand, foot.... whatever!!!  Needless to say, we counted the fingers on the handlers before we all took a step back when they pulled this 3 year old cobra out of the cage. 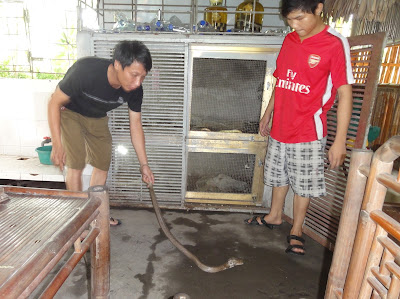 Once they had a good grip on it's head, they milked its venom. It's amazing just how much venom there was... 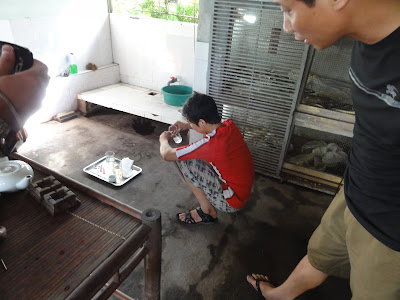 Then they killed it and took the beating heart out and put it in a cup,  and drained the blood and the bile... 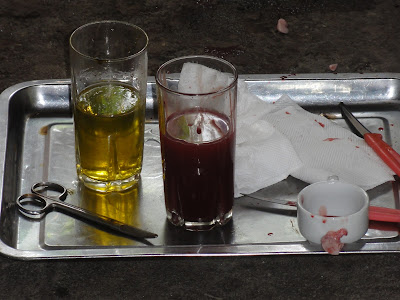 I video'd the entire slaughtering process, which was fascinating... so efficient and quick. The skin is peeled off (much easier than skinning an eel - and they're not slimy either!) and the meat is filletted off like pulling off a ribbon.  Very little is wasted, just some of the guts. Even the intestines are stripped out and sliced open to be cooked up later.

Being the birthday boy William got to swallow the beating heart!!!! And he did it - a shot of rice wine and it just slipped down... but he said he could still feel it beating... 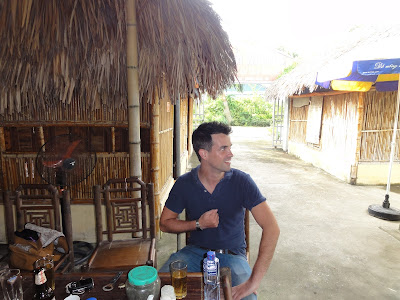 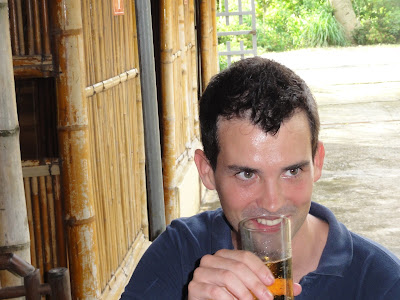 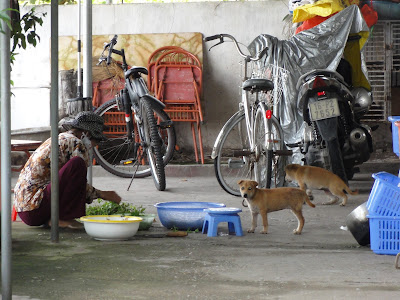 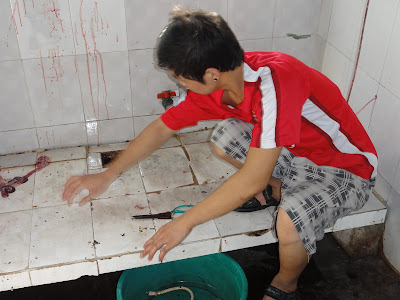 The ladies got on with preparing the food and the clean up was done in no time...  We were escorted to a private dining room which overlooked the large pond. Fortunately the day was cool enough to enjoy fresh air with fans blowing rather than air-conditioning. 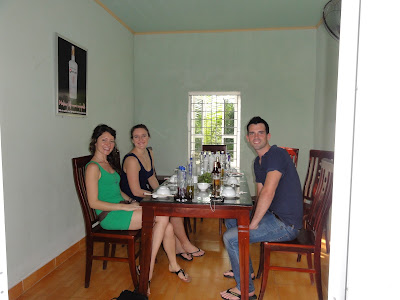 Chey, Katherine and Will

First we were presented with 2 bottles - rice wine mixed with the snake's blood, and another mixed with it's bile... and it was time for a toast. 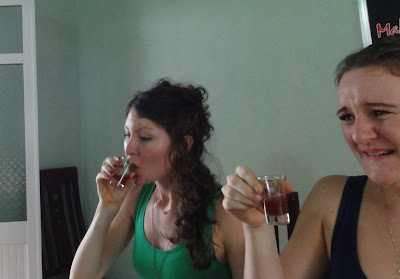 So we began with a shot of blood wine... Katherine found it hard going though! LOL 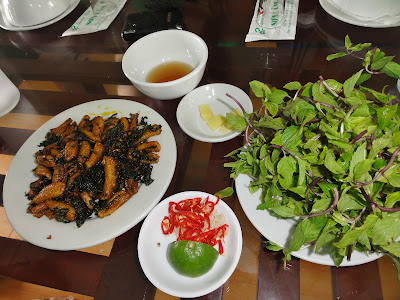 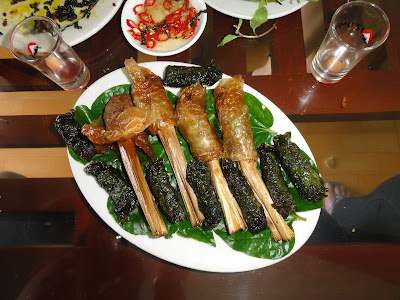 The snake was presented in various dishes... all of them tasty...Especially this dry mix. It was pretty much like dukka, but it's made from ground bones, peanuts and spices all roasted together - very tasty! 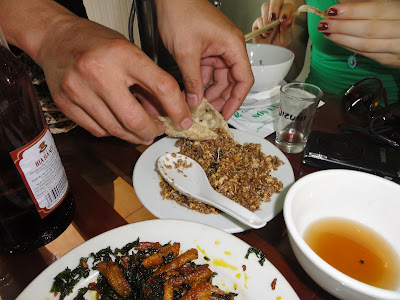 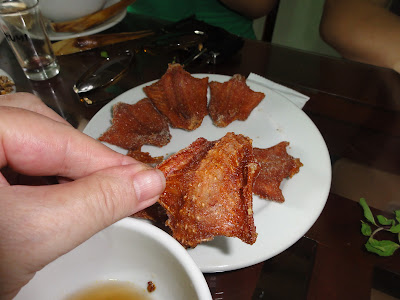 These portions of fried backbone were chewy but flavoursome. 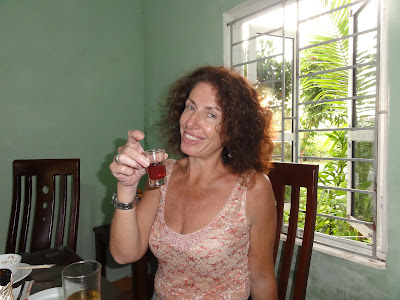 After a while Toni joined us in time for a toast of blood wine and bile wine combined (I must admit I couldn't come at that one). She had been to Hanoi for an adventure at a film studio and was late getting back. We sat around the table chatting as the sunset and the ducks settled down for the night on the pond. 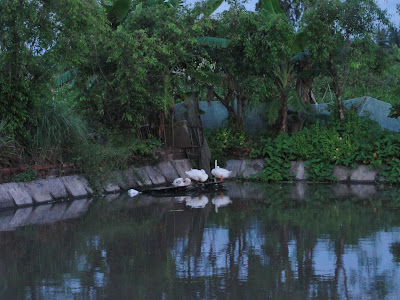 It was all quiet and peaceful out there in the middle of nowhere in the countryside. Very pleasant. We got a shock when we got the bill, though. It was twice as much as they had quoted over the phone when Will made the booking... worked out at $35 each! - an enormous price for dinner over here.

Anyway, after that we headed back into the city to a delightful party boat moored by a bridge. 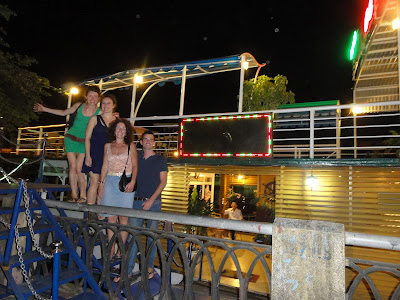 It doesn't actually go anywhere, so there was no 'harbour cruise', but a thoroughly enjoyable karaoke deck sitting out in the open in the cool of the evening.  Xuân joined us... 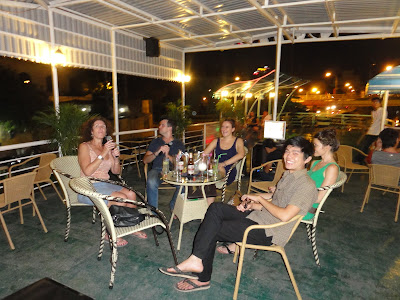 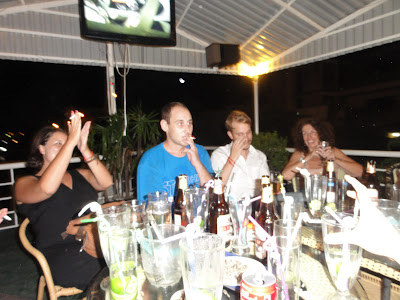 ... then it wasn't long before a crowd of other foreign teachers joined in the celebrations - probably 20 or more unwinding after the week's work.  The boat bar closed for the night at 11pm, so the party moved on to Julie's Bar. It was jammed packed with people and Will was in full on celebration mode... here he is dancing on the bar with Rie. 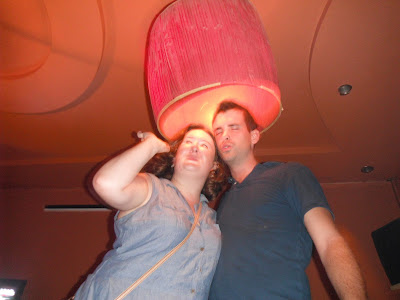 While we were at Julie's Bar Khánh arrived. He had caught a bus down from Quảng Ninh and is home for the weekend. It is so good to see him... He is very brown from working out in the sun...quite a tan! I must admit is was a memorable night for me, heart to heart with Will and Khánh - two of my favourite people - doing gin and tonic shots.  Will kept saying that he couldn't get over how close we are when I'm as old as his Grannie and even his Mum wouldn't dream of doing what I'm doing ... LOL ... telling me I'm awesome. It was a night I will never forget.

Toni and I finally caught a taxi home at 3am... no classes tomorrow. Just as well!