We had been looking forward to today for months, having found Hidden Hanoi Cooking School on the net. They advertise "Cooking Classes that are fully hands on, not just a demonstration. Guests have the chance to prepare their own typical Vietnamese meal in our purpose built kitchen, before enjoying the meal in a friendly informal atmosphere."

Hidden Hanoi is located at 147 Nhgi Tam Rd so we took a taxi, and on the way I finally got to photograph some of the amazing mural wall that I have admired each time I came to Hanoi. The wall is actually  the ancient Red River dyke (believed to be over 900 years old), which is critical in protecting the city when the river floods. A part of the dyke, which is running along the urban streets of Hanoi, was concreted in 1990, but was an eyesore because of illegal graffiti and advertising. The mural project was to mark the city’s millennium in 2010 by converting urban areas of the dyke with a colorful, creative mosaic which captured the vibrancy of the city and reinvigorated urban Hanoi by bringing local communities together through public art. 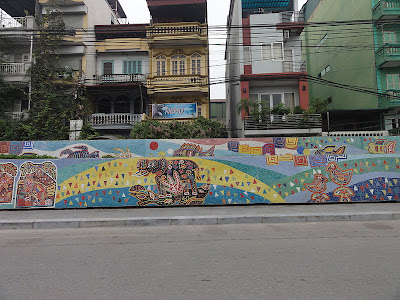 The ceramic mosaic mural is 3.85 kilometers long and has been confirmed by Guinness World Records as the largest ceramic mosaic in the world. It was unveiled in October 2010 to coincide with the 1,000 year celebrations of the establishment of Hanoi. 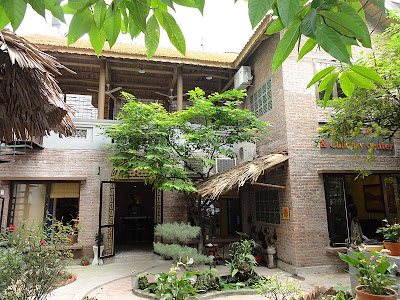 We arrived early and a delightful young lady took us on a walking tour of the local market, explaining the various foods as we went. It was fascinating.

She told us there are three kinds of markets:


Some of the frog market produce we passed included live 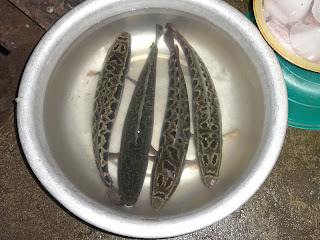 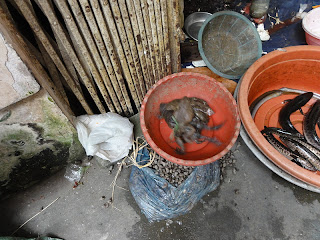 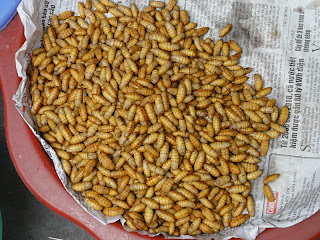 and wriggling insect pupae
Inside the local market our lovely guide showed us many different foods and explained how they are used. 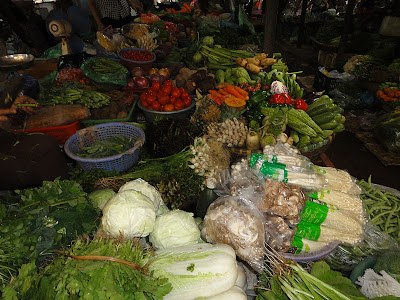 As always, the produce was bountiful and harvested just this morning. 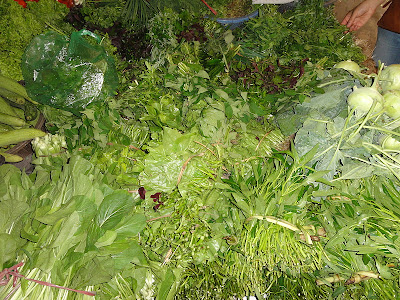 It really makes our Woolworths look like the 'several days old people'!
By the time we got back to Hidden Hanoi, seven others had arrived and we donned our aprons and began. First up, our teacher - Mrs Hanh An - took some time to explain how most Vietnamese people have their meals. Everyone eats out for breakfast. In any one neighbourhood several ladies specialise in breakfast fare - pho, or bánh cuốn, etc. and people eat at these little 'restaurants'. She said it is an excellent way of maintaining a sense of community. For lunch, people eat together as a family at home - food fresh from the markets that morning. Dinner is more flexible and can be either at home or street food. She also talked about the differences between food from the various regions of Vietnam. Then we moved to the cooking stations.
This is Mrs Hanh An (with a banana flower) 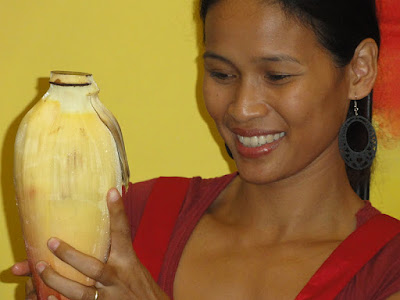 Isn't she exquisite?
There were five dishes on our Monsoon Menu:
and everything was set out at the work stations for two of us on each dish. 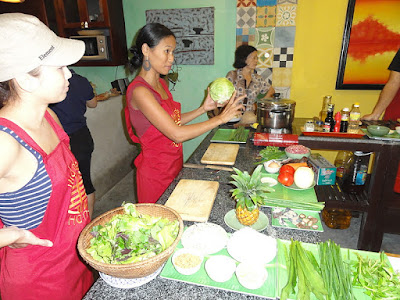 An explained each step of the process to all of us, then we chopped and diced and cooked... there were clear recipes and it was all remarkably easy and fun. 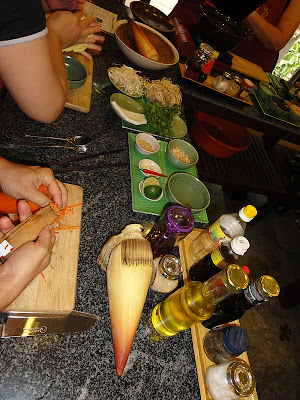 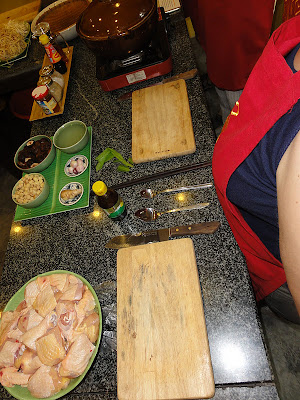 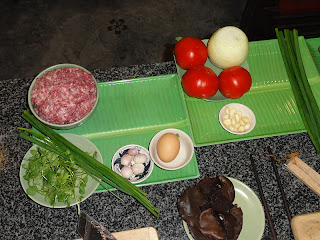 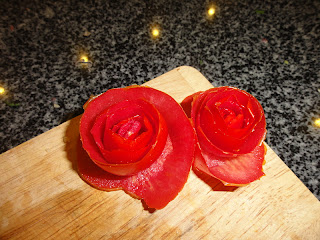 These are the tomato roses Katie and I made for a garnish.

It quickly became apparrent to all that Katie was the accomplished chef amongst us, so An asked her to cook off the tomatoes and onions to prepare the relish for the Cabbage rolls. 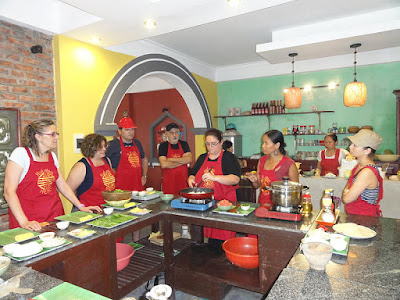 The man in the balck hat is an American from Panama. He is an alternate lifestyler who has developed a huge farm with wide variety of tropical fruit trees over the years. Sounds like a tropical paradise. The othe man and the ladies next to him are from Spain. The girl in the beige hat is a Vietnamese American who has come to live in Vietnam with her husband. He is a lawyer and they live in Saigon. 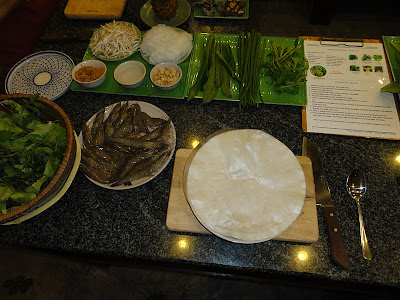 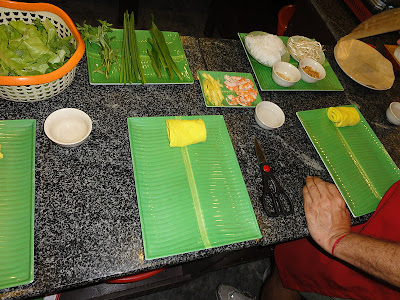 After the spring roll ingredients were chopped, cooked and ready for assembly, they were divided among the four stations and we all got to assemble and roll our own... with varying degrees of success. Among our fellow students were four Spaniards - a man and three ladies. He was obviously the keen chef, and the ladies were pretty half-hearted. Anyway, we had all finished rolling our spring rolls (which included peanuts) when one of them announced that she is allergic to peanuts. So there was a scramble to find enough leftovers so she could make one she could eat. Then An had to set aside some of the Banana Flower Salad (which also included peanuts) before final assembly. Why would you do that... say nothing till the last minute? She obviously wasn't as allergic as some, because she was handling peanuts with no ill-effects... 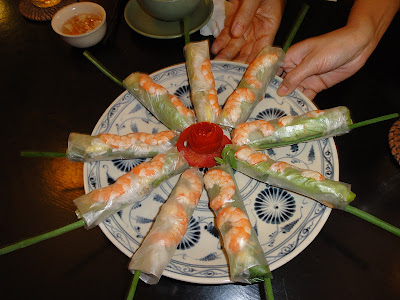 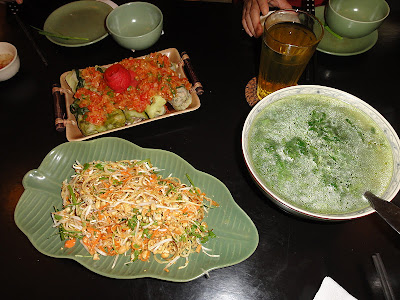 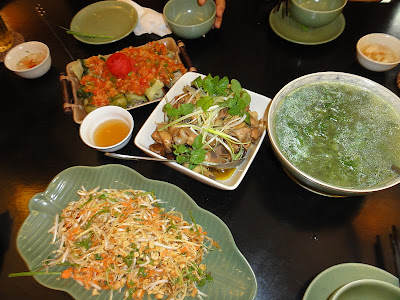 And there's the Claypot Stewed Chicken with lotus seeds and mushrooms.

We enjoyed a totally delicious lunch. I was a bit cautious that the Green Wasabi Leaf soup would be too hot - like wasabi paste, but by using fresh young leaves the soup had delicious flavour without the bite. 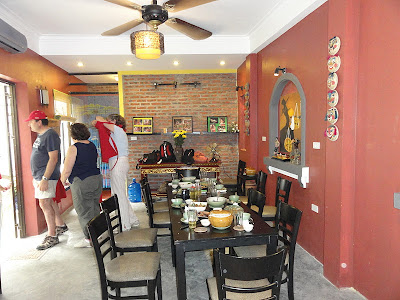 This is the dining area (after the meal...). Isn't it lovely? 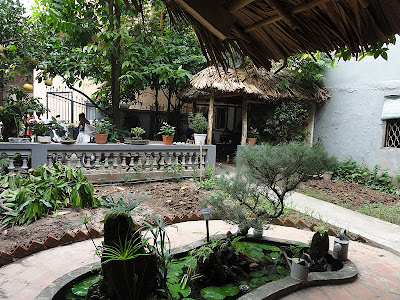 This little garden outside the dining room will become a herb garden. The building is very new, but it won't take long for everything to grow in this climate. 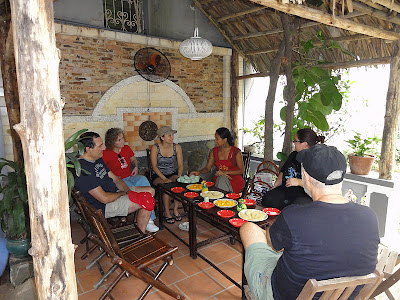 We finished up with tea and fresh fruit - mango and pomelo - for dessert outside in the gazebo. 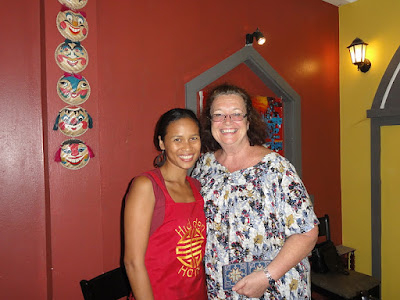 Katie and I agree that this was the highlight of our trip so far. Totally worth the $50 it cost. We will definately come back and do one of the other Menus on offer next year... and maybe one of their walking tours as well.

An called a cab for us and we went back to our hotel to pack our bags and go for one last walk around Hanoi. The lake at night is always so pretty. 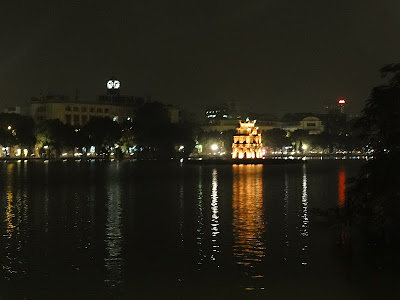 Tortoise Tower, in the middle of the lake 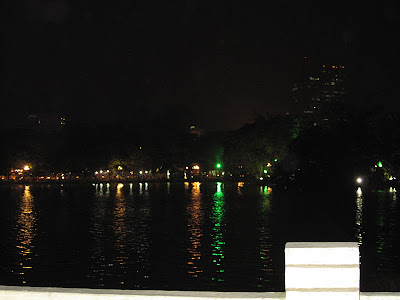 We stopped again at the Thuy Ta cafe and sat on the patio overlooking the lake. Katie had a cocktail-sundae, and I had a mille fleure  for dessert. 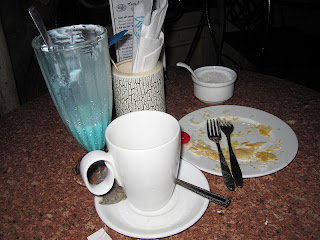 It's the people that make Vietnam such a delightful place to visit. 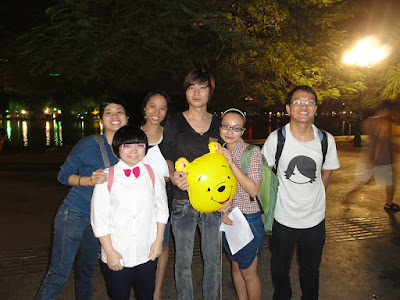 These cheerful young teens were conducting a survey to practice their English. The bold ones in the group asked us questions from their sheet in halting English, giggling with self-consciousness... just gorgeous!

Our 'Alex Nicholson' driver came on time at 7.30pm to take us to the station in plenty of time to board the overnight train to Lao Cai - en route to Sapa. 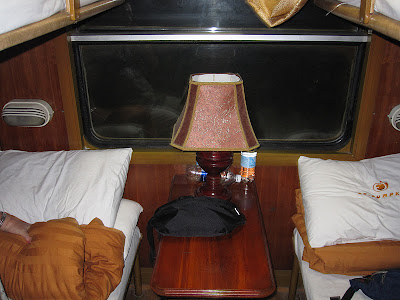 We settled into our cabin for a much shorter journey than from Hue to Hanoi... we arrived in Lao Cai at 4.30am!!