We had a pretty good night's sleep on the train, considering, and the scenery was very pretty as we travelled on through the morning. We woke to the knock of the breakfast lady. I bought a couple of boiled eggs and something wrapped in banana leaf. I don't know what it was, but I think it must be an acquired taste... very banana leafy. 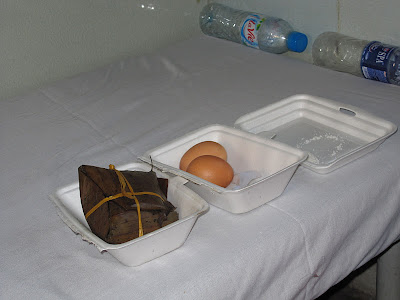 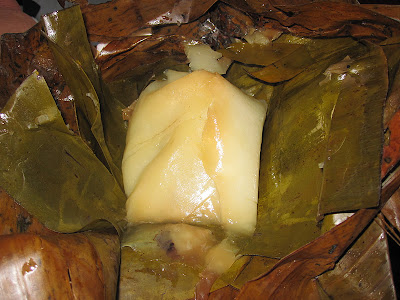 But the eggs and fresh Bánh Mi was great 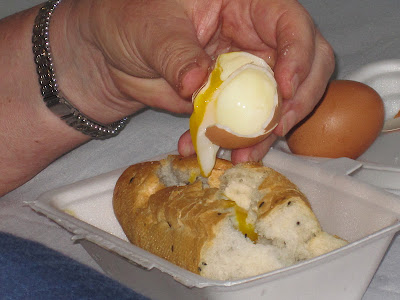 We sat back and watched the countryside go by. These enormous rocks are destined for water features. They represent mountains in gardens and are a crucial feature in a well designed garden. 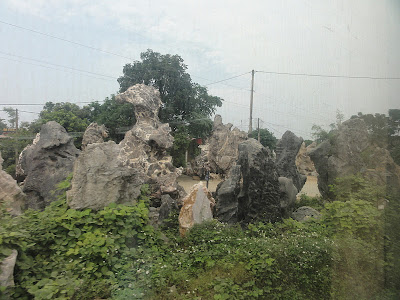 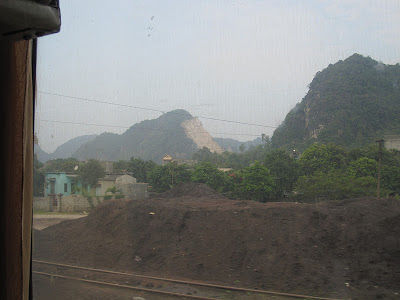 One of the things I love about Vietnam is how the people do not waste anything. Even the little bit of land at the side of the train tracks gets utilised for small vegie gardens 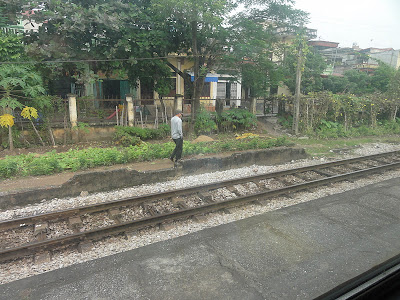 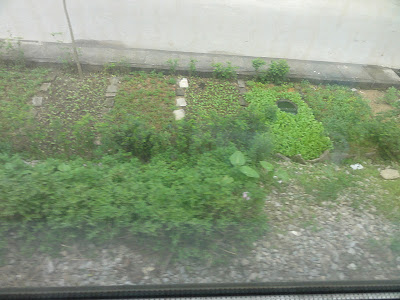 And the farming is so intensive the market gardens are a fascinating patchwork of textures and colours as each farm produces a wide variety of crops. 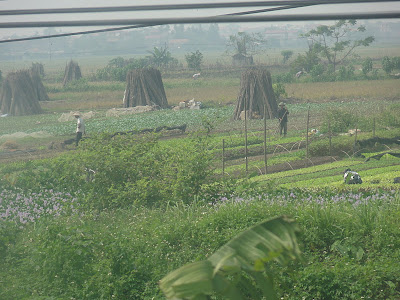 You can see stands of bamboo in the fields. I'm not sure what the story is there. 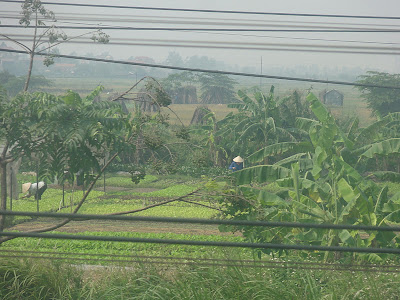 Everything looks so lush and plentiful. 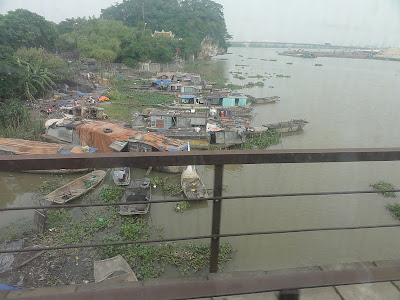 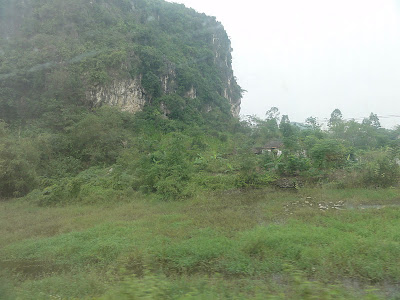 Can you see it there, on the hill, surrounded by fruit trees?

We passed through a few towns, but didn't stop 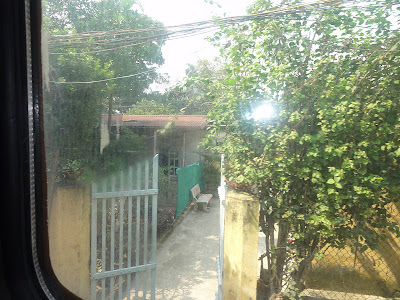 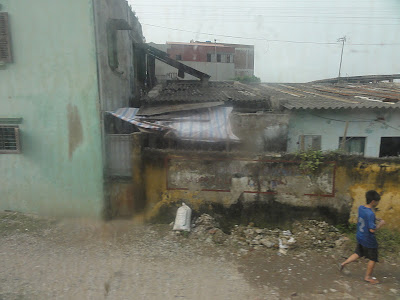 We pulled into the station at Hanoi at 11:45am as scheduled, expecting to be met by a driver who would take us to our hotel. There were a few drivers with name placards there when we climbed down off the train, but none with our names, so we made our way to the station entrance, where there were plenty of taxi drivers offering to drive us, but no sign of the one we were waiting for. After about 15 minutes waiting in the hot sun with our luggage, I rang Giang to see if he could sort something out. It wasn't long before he rang back to say our driver was at the station, but he had the wrong name on his placard!!! (Who is Alex Nicholson?? ) ... this was the first of many stuff-ups by APT Travel, the agency responsible for this half of our trip... Then I got a call from the girl at APT travel agency and handed my phone to the ticket collector so he could explain exactly where we were, since I couldn't get her to understand.

Anyway, our driver appeared all apologetic after a bit, telling us he had actually been waiting since 7am (which I found hard to believe... since our train was on time...). He walked us across the road to the shade of a tree and asked us to wait while he went and got the car.... ten minutes later he re-appeared, and we finally headed off to the Hanoi Capital Hotel, on a little back street in the Old Quarter. 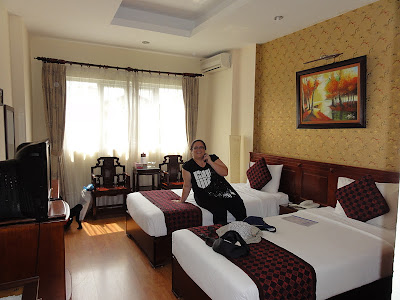 No complaints about the room. It was lovely.

By now it was early afternoon, so we got a map and went exploring. We strolled through the Old Quarter, enthralled by the bustle, the shops, the people and of course, the traffic. I love this part of Hanoi. It is so incredibly picturesque and exotic to me. Even though the streets are jam packed with motorbikes and bicycles, there is still a feeling of timelessness as people go about their daily lives as have the generations before them. Everywhere you look there's something fascinating... my mind is always full of questions - just need a local to explain it all.

We walked around Hoan Kiem Lake (but didn't see the turtle this time...). Any time we stopped for a photo a local usually asked if they could take a photo with us in it - like this lass 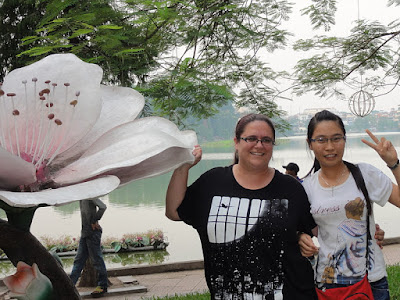 After walking around the lake, we stopped off at the cafe at the crossroads near the water fountain and enjoyed an ice-cream sundae. 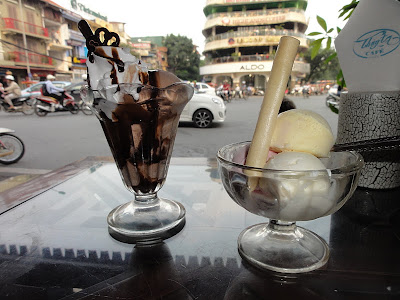 Then we sat and watched the crazy traffic 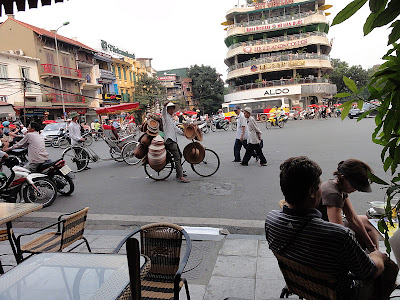 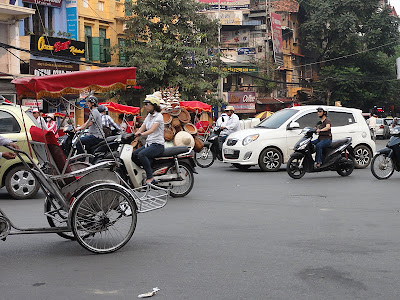 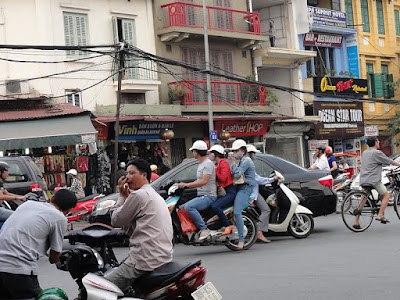 Then we went to the Water Puppets. Water puppetry is an art form which originated in Vietnam at least 1,000 years ago. They are so entertaining. Even though I have already seen the show I was happy to see it again with Katie. The traditional Vietnamese music is so very different from anything we hear in the west. 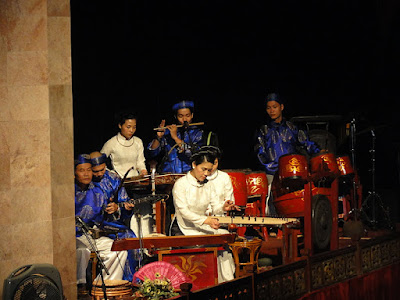 The entire performance is accompanied by a live orchestra sitting to the left of the stage. The traditional instruments include drums, flutes, xylophone and the harp-like dan bau. The band is accompanied by singers as well. Many of the acts have spoken dialog as well, but it isn't necessary to understand the words in order to appreciate the scenes.

The performance is a series of unconnected skits or vignettes. Some simply depict scenes of everyday village life, such as planting rice or catching fish.
Others act out famous legends or myths. 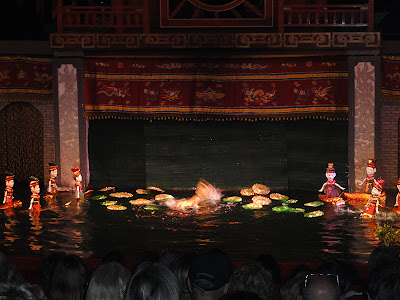 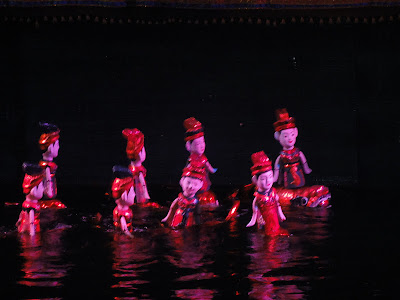 The puppets are mounted on long poles, which remain totally hidden under a shallow pool of water. The workings of the puppets can be quite elaborate, and part of the fascination of the show is figuring out how each puppet works. 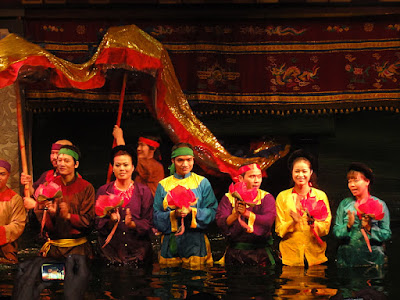 These are the puppeteers 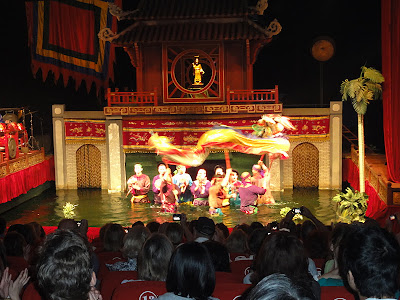 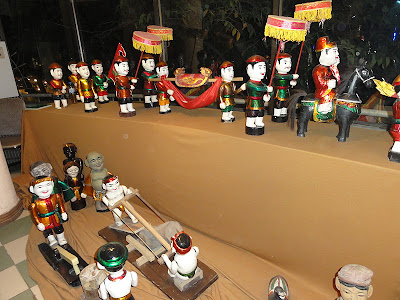 The puppets are carved of wood and painted or lacquered with bright colors. 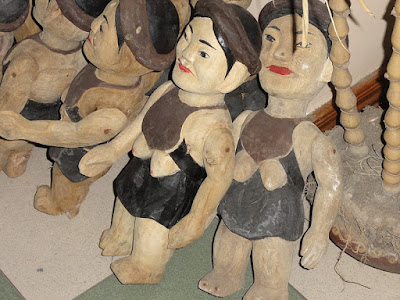 I took Katie to Câu Gố Street and bought her Bánh Khúc from the street vendor Lina introduced me to. 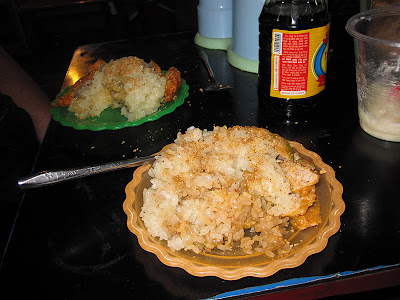 Katie agrees with me ... it's now one of her all time favourite foods, too.  We did plenty more window shopping as we explored the Old Quarter and made our way back to our hotel.  The street our hotel is in is used as a motorbike parking lot during the day, but in the evening the bikes disappear and people use it to play badminton. There is a restaurant featuring Pho Ga and Hot Pot that sets up tables on the road as well, so we fell asleep listening to the sounds of people enjoying themselves.