I was a smashing hit at the local market

MONDAY 28th March
Now that was a good book... quite engrossing.  In the meanwhile life goes on in Hai Phong.   Let me think back... Bowling was fun, although I was quite pathetic, only scoring 37 in my first game, but I did improve and doubled my score for the second game. And to think I’m so much better at it on the Wii... 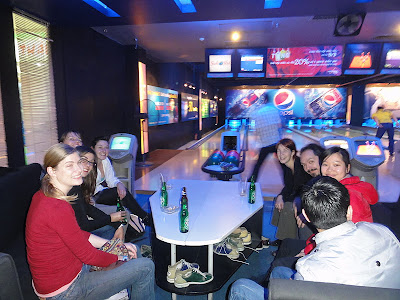 Dave had been all aches and pains for a couple of days and he came down with a full blown gastric bug on Saturday night. By Sunday lunchtime he was wretched, so I got him some lemonade and did a load of washing for him and Amie gave him some of her anti-nausea drugs and he slept all arvo. Needless to say, we called off the house-warming party... maybe next Sunday.  This morning he’s looking much better (no longer like death warmed over) and managed to eat some breakfast. I scrubbed the bath upstairs (it was filthy) so he can have a long hot soak and rest up for today. He doesn’t have any classes till tomorrow night.
He patted me on the shoulder to say thanks and it made me realise that I haven’t had any human contact since I left home... no hugs, nothing but the occasional handshake!  And it’ll probably be like that till I get home – really appreciating family and friends!
The most exciting thing that’s happened in the last few days was at the local market.  Not far from school there’s a small market down a lane off the road I walk down every day. Up till yesterday, I hadn’t gone down to have a look, since on the way to school I’ve usually got no time and on the way home it’s shut.  So last night I finished teaching at 5pm and the market was still open. It’s pretty much like a grotty version of the markets elsewhere... in the laneway people sitting behind little piles of produce... fruit, vegies, eggs, noodles, chunks of meat, cooked  or whatever... Invariably I get pointed at and often laughed at, but other people smile and say hello.

I wandered into the undercover part where the stalls are bigger... food, clothing, kitchenware, shoes, chickens and ducks... all sorts of stuff. It was the end of the day, so it wasn’t busy. The walkway was probably about 3m wide. Then about 5m in front of me this man suddenly started up his motorbike and gunned it towards me. I don’t know if the throttle was sticky or if  he saw me and was shocked... either way, he came careening towards me with a startled look on his face. I managed to step out of his way and he only knocked my finger as he accelerated past, but by then he was wobbling wildly (still accelerating!). He just clipped a table loaded with crockery and smashed into a steel column. How embarrassing! As he shamefacedly started crawling out from under the bike he gave me the dirtiest look!! Like it was my fault he was an idiot!  People from all over were gathering to see what had happened and all eyes were on him, so I just kept walking. There were plenty there to help him and I couldn’t defend myself if he decided to try and say that I had caused the accident!
After that, my wander through a half closed market was a bit tame! As I stepped out into the laneway, a man grabbed me by the arm and pointed excitedly at some meat. He picked up a piece and waved it at me, obviously wanting me to buy it. Apart from the fact that I wasn’t shopping for meat, it looked like it had been sitting on the slab all day, and I didn’t recognise the kind of meat (and I didn’t really want to know). So I just smiled and said ‘No thank you!’ and kept on moving.
I stopped off at my Pho place and had fried rice for dinner... delicious. Then came home. Dave was on the improve so I made him some vegemite toast, then I settled into bed and finished reading House Rules.
Today is again overcast and cold. The forecast is for this weather to continue for another week. Oh well, it’ll be too hot before we know it. This week I have Tuesday and Saturday off, and only 14 hours teaching. The roster is always changing and seems to be all over the place. I would hate to always work like this. I sympathise with our hospital staff back home. I understand they have to put up with ad hoc rostering all the time. How on earth could you ever plan ahead? Surely a more efficient system could be designed, even if it was 2-3 weeks in rotation?
Posted by Annie Gooch at 11:14 AM