TUESDAY 22nd March         I’ve Been To Hanoi At Last!
After our last class on Sunday (5pm), Sarah and I caught a taxi to the bus stop and a coach to Hanoi! Heather (from HJ Consultancy) asked us if we’d like to join her and some other teachers for dinner... and why not??  Since I only had one class to prepare for Monday night, I decided to go. Sarah has Monday and Tuesday off so she was definitely in. Amie was undecided till she got her roster and also had Monday and Tuesday off so she decided to come, but had to catch a later bus because she wasn’t packed and ready to go. 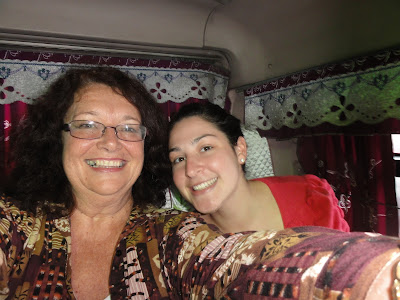 This is Sarah and me on the coach................... off to Hanoi!
When we started out there were only a few of us on the coach, but the nearer we got to Hanoi, the fuller it became till they had the aisle full of people sitting on little blue stools!  The on board movies were both kung fu..... 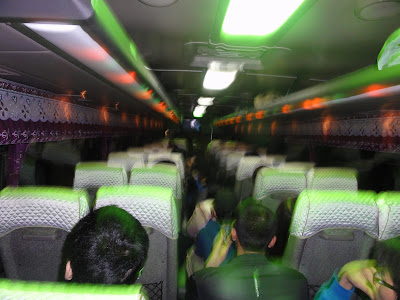 The trip took two and a half hours, then a ten minute taxi ride to our hotel.
We booked in to The Sports Hotel... a quaint little hotel in the French Quarter which is clean and comfortable for only $16 a night. This was my room: 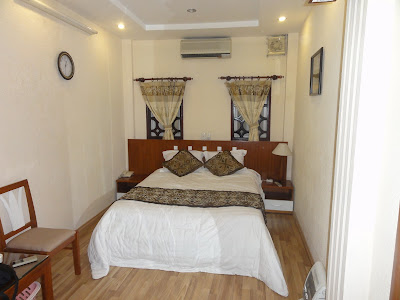 We bustled off for dinner with Heather and other TESOL teachers at this Italian restaurant near St Joseph’s Cathedral ... an expensive rip-off by Vietnamese standards! But the company was great. Several had left before I took this pic.. 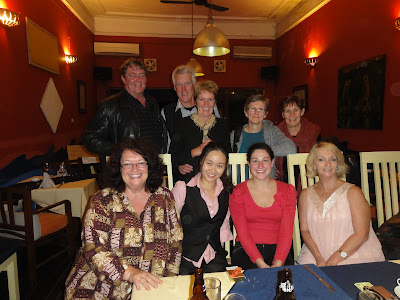 It was very noisy when we arrived, so I didn’t catch everyone’s name, but they are from the back left: Mike, Des and Lynn Rees, ? and ?; and in the front row: yours truly, Mike’s fiancé, Sarah and Heather. They’ve all been teaching for way longer than we have and had many stories to share (all Aussies except Mike’s fiancé). I was sitting next to Lynn and it turns out we are both turning 60 in May!  They are living in Hanoi right in the middle of things, so I will get in touch next time I go  so we can catch up. She and her husband have been TESOL teaching for several years... 6 months on, 6 months off... in India and China. They did several stints at a University in central China which they loved and Lynn assured me that if I want to go there, she can get me the job no problem.  Now I’m actually teaching, I love teaching the adults. They are so keen to learn and are so much more responsive than the children (and don’t even mention teenagers!!!).
By the time we finished dinner, it was after 11pm.  Amie had arrived, checked in and gone out for a meal at her favourite vegetarian restaurant (... way better value than what we had! ...) and was waiting at the hotel. The girls were set on going out on the town, so it was time for Grandma to say goodnight and turn in...   I heard them come in at about 5.30 am...
Needless to say, next morning I went for a walk on my own. I was looking for a shop recommended to me called the Russian Shop in the Hanoi Tower, which stocks large sizes. I was hoping to pick up something warm. Anyway I walked to the Hanoi Tower and couldn't identify a Russian Shop... So I walked back via the lake. It was a pretty dreary old day, I look forward to seeing it in sunshine! 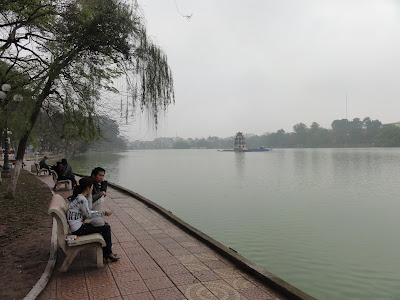 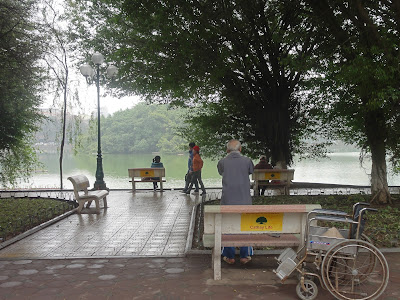 This dear old gentleman was doing his exercises. 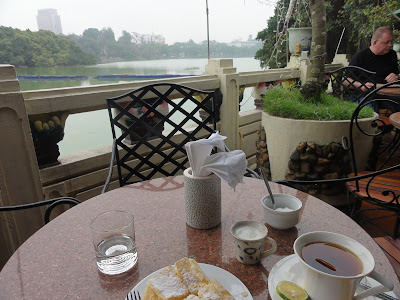 I stopped for breakfast... 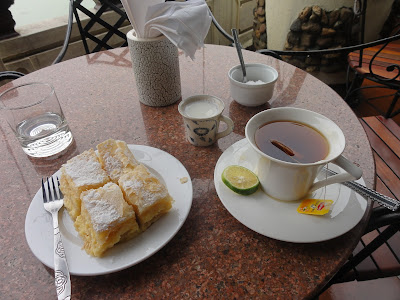 I didn’t take many photos walking around, which is a pity because the city is bustling and quite delightful...but here’s the couple I did take: 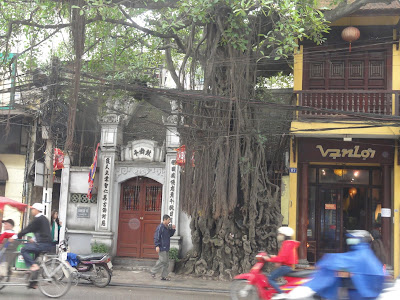 check out the tree trunk ! 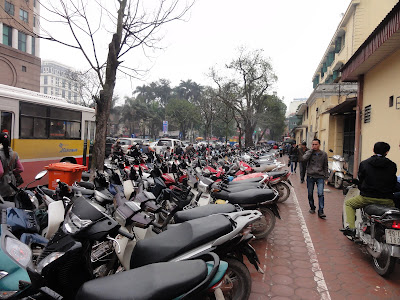 A motorbike carpark... I reckon one of the reasons everyone rides these is because they’re so easy to manoeuvre and to park. People simply drive them into the front room to park at night, and the footpath is the go during the day. When walking, it’s always an obstacle course. Even cars get driven into the front room... nothing is left parked on the street at night.
I found a pottery shop... she claimed that these pots are 1,000 years old and they are selling for $100... maybe she exaggerated just a little? 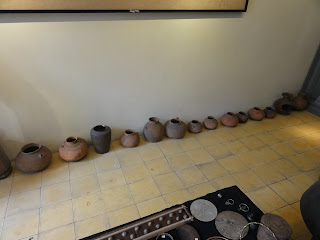 I also found a QX Viet Nam Hand Embroidery shop, which was simply breathtaking. There were a couple of ladies in traditional dress working on big frames. The colours of their silk threads was amazing. They sew with many threads at one time... at least 8... which stand to reason considering they are filling in large areas of colour and the threads are so fine.
The standout was a life-size portrait of an old man. He was set in a large double sided frame, which showed both his front and his back. He was slightly padded, so he stood out from the black background. I’m not sure if his clothing was real or painted on, but each strand of his hair was embroidered in white silk, and his cane was embroidered. He looked so real, you almost expected him to start talking, and he had the loveliest face. Next time I go there I will photograph him. I really hope I can budget to bring home one of the embroideries depicting ancient pieces of pottery. The are simply exquisite.
By the time I toddled back to the hotel it was 11.30 and the Do Not Disturb sign was still on Sarah’s door, so I checked out and caught a taxi to the bus station. Most of the scenery on the way home was grubby humanity, but there were a few places with rice paddies and vegie farms: 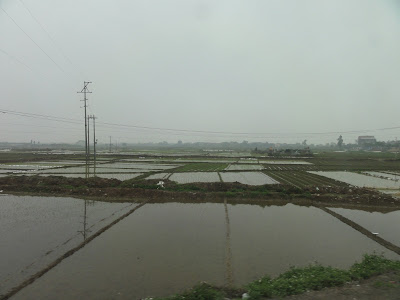 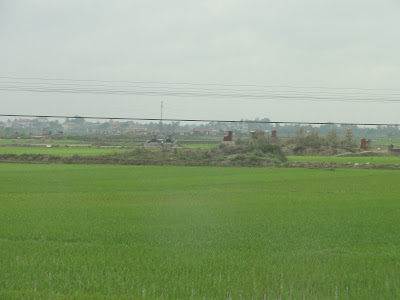 Since I won’t get my first pay till the end of the month, I borrowed 1,000,000 dong ($50) from Sarah so I could do the trip, but on the bus home I realised that I only had 50,000 left and the taxi from the school to the bus station had cost us 60,000, which meant I didn’t have enough to get home!  It was about 2:30 pm so I decided to go to the school and hope someone would be there who could lend me some money...  Then when I got off the bus one of many motorbike drivers came up. One said he’d take me to school for 30,000 so I jumped on behind and off we went. I really enjoy travelling pillion anyway, so that was all good!  When I got to the school, no one was there who could speak English anyway, so I shouldered my backpack and walked home!
After a shower and a chat to Katie on skype, I prepared the night’s lesson and walked back in to school. Apparently Eathen swapped a class with Dave and that gave him 3 days off (!) so Eathen has gone off to Hanoi to catch up with the girls.
Posted by Annie Gooch at 2:34 PM