A Blackout, a Funeral and a Policeman...

TUESDAY 29th March
We had a blackout this morning from 7am till now – 3pm.  There’s a housewarming (we think) going on just down the lane and when they were setting up the awning which stretches across the lane, they apparently upset the power-lines... anyway we’re back on line now but so is their PA... oh my goodness, they must all be deaf!  There is a lady singing a song that has been going without pause for at least 15 minutes... it sounds like an epic poem or something, cause the melody is just going round and round and it is so loud they’d be able to hear her in Hanoi!  This is accommodating guests Vietnamese style... just take over the road if there’s no footpath! 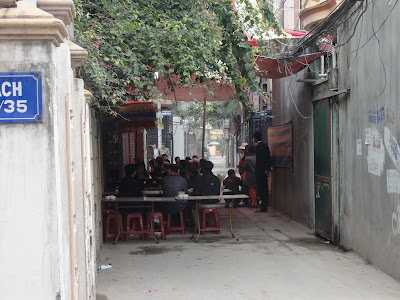 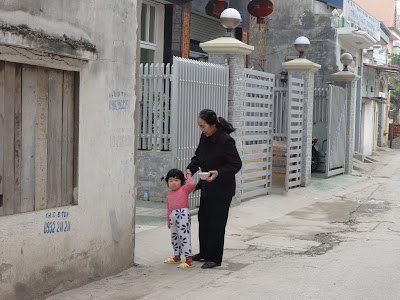 ..neighbours watching.
Since it’s my day off, I was planning to do a load of washing first thing. Even though it’s not sunny, it is not cold today.  I had lunch at our laneway cafe, pointing to a few things not knowing what the yellow things were in the meat section... turned out to be chicken’s feet... Still it lunch cost me 12,000D (60c)!... 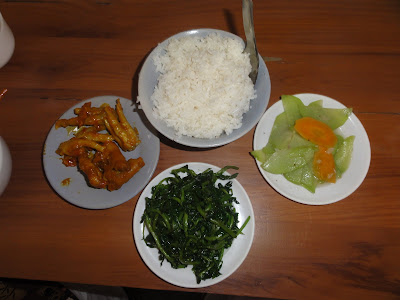 ...compared to $5.00 for the prawns & cashew stir-fry and melon juice I had at the restaurant at the top of H Tower for lunch yesterday... 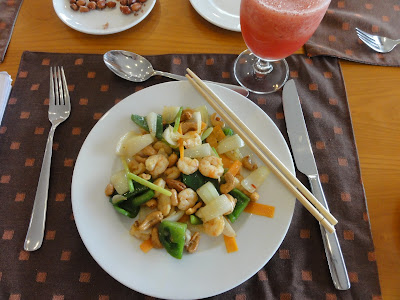 This morning I walked to the supermarket that Dave showed me when we first got here, but this time, instead of following the main roads, I took the laneway just near our house. What an amazing place... so many different houses (rich and poor), little shops and cafes, twists and turns. Some of the houses had little gardens, many had dogs, some had bird cages... all behind high gates and glass topped walls. There weren’t a lot of people about since it was in the middle of the day when many have a snooze. Next time I’ll take some photos coz it was so intriguing.
I did however take a picture of this building under construction... now there’s a very resourceful solution to the problem of how to support a lintel while the concrete’s still wet! This brickwork will be plastered over and possibly tiled, too. 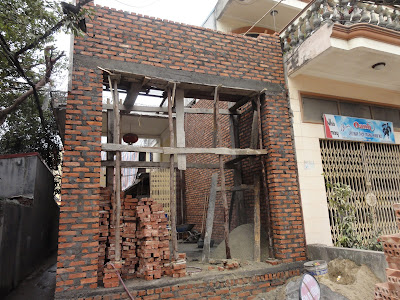 You can’t really see it, but the props are Bamboo poles wedged on piles of bricks with a few boards tacked on for bracing!
I also took some pics of this stall selling Chinese Pottery outside the supermarket. What caught my eye were the fabulous crystalline glazes on those huge urns... The white ones were quite extroardinary...  Mountain Ash Pottery eat your heart out! 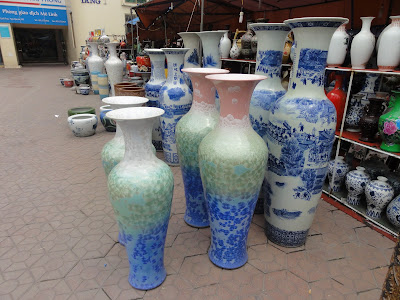 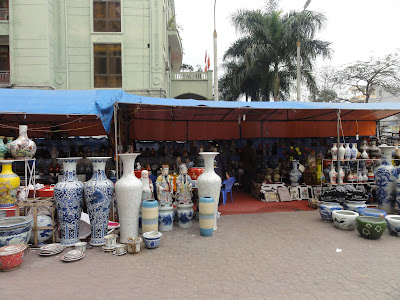 Well, you just never know what’s going to happen next in the big city... I just went downstairs when the singing changed to a cacophony of noise from some ‘musical’ instruments I don’t recognise...

I stepped outside the gate to take a video, because you’d have to hear it to believe it... and a policeman left the gathering I was filming and invited himself inside!
Turns out he was just being friendly and wanted to invite me over to his house to meet his wife who teaches English at a secondary school nearby! His name is Than and he has a son and a daughter at university in Hanoi who come home for the weekend once a month. He had limited English, but was very friendly. Apparently the ‘celebration’ is not a house-warming but a funeral, and will continue till about 9:30 tonight. Then tomorrow they will move the body to the cemetery. Than was very keen to get me to come over to his house this week, but I have to work in the evenings. He has my phone number and he gave me his and told me to ring him if there is every any trouble.  He lives not far from here, so I do hope we can become friends. 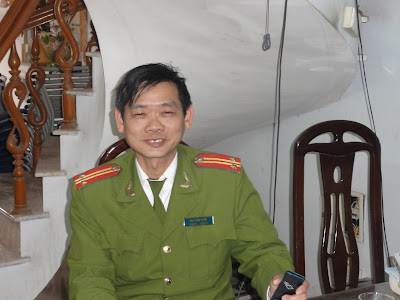 This is Than, my friendly neighbourhood policeman!
Posted by Annie Gooch at 4:42 PM