Khánh came home from Quảng Ninh for the weekend, and I had the morning off work (!) so he came over and we went out for Bún Chả for lunch... always delicious... and caught up on all his news. He has a contract to work there as an intern for two months, so he will not finish till mid October. But in the meantime he'll come home for the occasional weekend, so that will be good. He is working for a Korean construction company on the new Power Station being built...2,000 workers on the project, so it's huge - a steep learning curve, but great experience.

There is a very beautiful beach near there, so I plan to catch a bus and go to visit him when he finishes up so he can show me the sights... something to look forward to.

I had a class in the afternoon, then after I came home at 5pm, Ba dropped by so we could go over the topic he has to do a presentation on tomorrow in class... about whether living together before marriage is good or bad. We had plenty to discuss and Katie joined us via skype, so by the time he went home he had plenty of material to use for preparing his presentation!

Khánh's Mum cooked Bún Chả so he brought some over for our dinner. Toni joined us and of course, it was delicious. Then we called Mr Cường so we could go to the city centre for tonight's pub quiz. Toni jumped on behind him and we expected him to follow us since he didn't know where we were going. But he pulled ahead, and didn't stop when Khánh pulled over for some photocopies and we lost them. I reached for my phone only to find it was not in my bag because Khánh had put it on the table after talking to Mr Cường and I didn't grab it! So we had to ring Will and see if he could phone Toni, but she wasn't answering her phone, so he sent her a text with the address. I was quite relieved to see her there when we arrived at the Phono Box.  Mr Cường had tried phoning me, but of course my phone was at home, and it wasn't till Toni reached for her phone to try that she got Will's message.  Just a little excitement on the way... Toni has only been here 6 days and Mr Cường doesn't speak English...  but all's well that ends well! She reckons he was in a big rush to get home to watch the football coz he rushed her to Julie's Bar, assuming that was our destination and was frustrated when he couldn't get me on the phone and she didnt' know where to go... just as well Will was on the case and he texted her the address!

Because Khánh and I were on the winning team (with Irene and Phil) we had prepared questions for the quiz. It was a boozy, smoky, loud crowd and a great night. 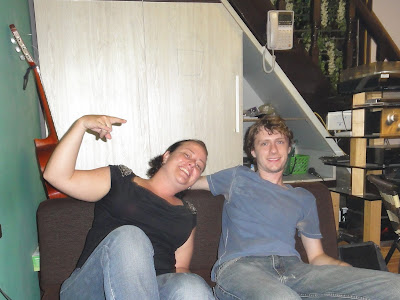 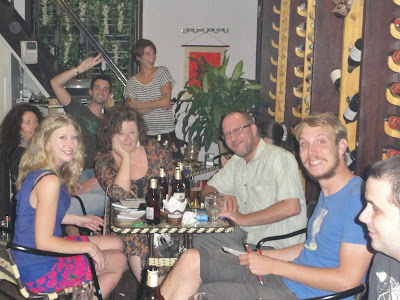 Emily, Rie, Mario and James with Toni, Will and Ingrid in the background. 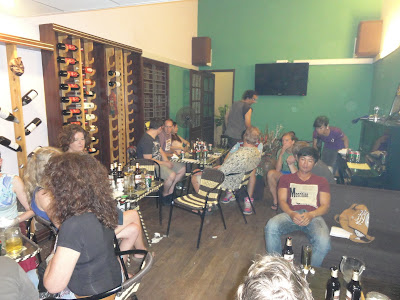 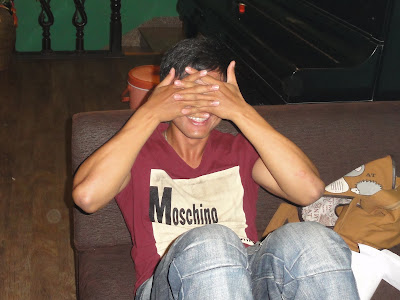 Not quite what I expected when I said "Smile!"  ...
The surprise of the night was to discover an extensive record collection, so we enjoyed music from the past... Beatles, The Mummas and the Pappas... so many songs from my day!  They closed the bar at 12.30 so we headed for duck noodle. Katie came here last year for the late night feast, but I hadn't been so it was a first for me. This is Harry's Cafe de Wheels Hải Phòng style... the perfect place for late night revellers to get great food.... 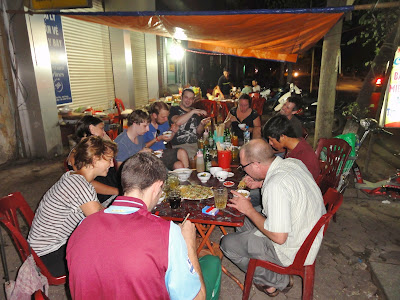 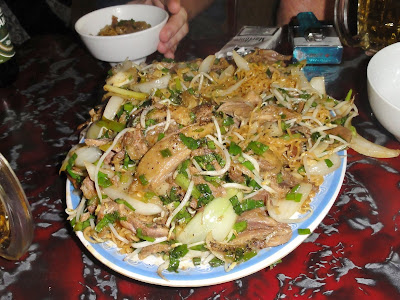 And this is it! Duck noodle.

A very late night for Grammy, but very enjoyable.  So good that I have the day off tomorrow!