Every couple of years the English Clubs in Hai Phong compete in an English speaking competition that includes recognising idioms, spelling (obscure words!!), presenting a topic and debating. Teams of two work their way through the preliminary rounds all vying for the prize money (4.000.000 dong each for the winning team!).  Through Xuân I was invited to be one of the judges for the final tonight. What a privilege!

Toni came with me and we were picked up by taxi and taken to the venue - the grand hall at the Hai Phong Medical University. The theatre was filled and the stage was set. A team of enthusiastic young people had been working on setting it up all week and it was all set. Unfortunately Tony was working, so he couldn't be there - which was particularly sad because the two finalists who finally won have been coming here every week, debating and arguing with him for months now and he would have been justifiably proud to see them go so well. 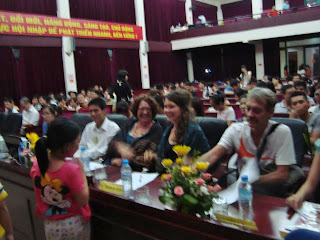 I was one of three judges - all English language teachers - Shay (from the US), John (another Aussie) and me. The three teams represented different English Clubs. They all spoke really well and it wasn't easy to score them. To be able to debate freely in a foreign language is quite a feat and I was very impressed.
That's Loyal, my TA from VAIE on the far left!
The program included several musical items - both song and dance. The couple who sang a duet while we were tallying up our scores was particularly good, and I found it hard to concentrate on the job!

Both dance items were thoroughly entertaining. But for me, the real highlight of the night was a dance performed by a group of students (many of them from our Nam Phat church class) that enthusiastically portrayed the unity and marvellous sense of family and belonging that these students share. They encourage and support one another with so much love and good humour it is delightful to see. They were not a group of trained dancers, so they'd had to work hard to learn the choreography... practicing every afternoon through the heat of the last month or so! I was sitting in the front row, so I got to video it - wonderful!
When the winners were finally announced it was Ha and Haianh that triumphed. So the celebrations began, with friends and well-wishers flooding the stage for photos...

Shame this one's blurry... but you get the picture! 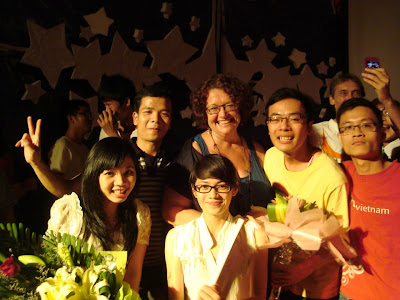 Many of the students here on the night were friends from our Nam Phat Church Class... so there were lots of pictures with the teacher! 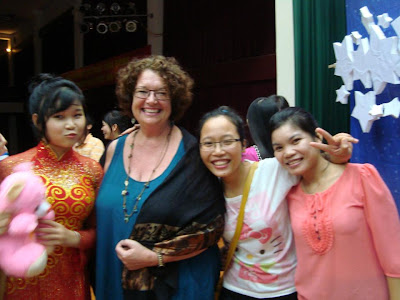 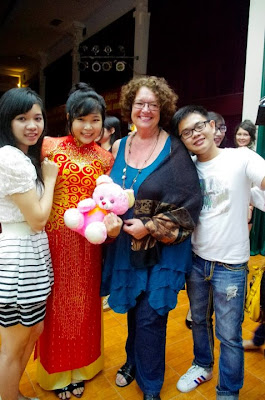 And this is the awesome dance team... 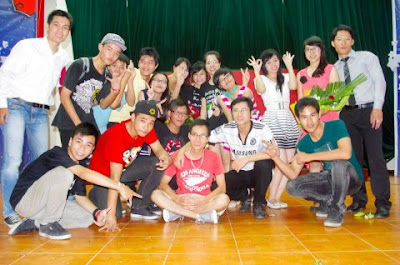