Picked up by the Police

This morning I had a class at Nam Phap church... it will now be on Tuesdays because the room is being used on Wednesdays. Because the change only happened last night, not many students knew about it so there weren't very many of us. We had a great time playing 'Backs to the Board Game' (Make two teams and stand one student from each team in front of the board, facing away from it.  Write a word on the board and the other students have to explain that word to their team member. The first student out of the two standing in front of the board to guess the word wins a point for his/her team.) It was hilarious and amazing how much noise so few people can make shouting clues. We played the game for over an hour because everyone was enjoying it so much. Even though it was just a game, they were all speaking English constantly the whole time, so it was a fun and effective way to practice.

This afternoon I walked over to visit Gene and we talked and laughed for ages. It was after six by the time she walked me down to show me a different way to go home. I was wondering just when to take the 'sharp left' when a policeman rode up beside me. It was Mr Than, the friendly neighbourhood policeman that I met last year. He offered me a ride home and laughed when I protested that I didn't have a helmet and I might get arrested... So I hopped on the back of his bike and as we followed the alleys twisting and turning all the way to Van Cao I was quite relieved that I wasn't walking, for I reckon I would have got lost!

We certainly caused a stir... not often people see a large Western lady (without a helmet) riding pillion with a local policeman! He invited me to stop off at his home (which is a lovely modern home just around the corner from our place) and I spent a lovely hour and a half talking with him and his charming wife, Nga. She is a secondary school teacher. Even though it is now summer holidays, she is teaching students who have enrolled for summer school, so it is classes as usual for her. 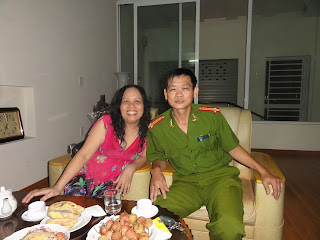 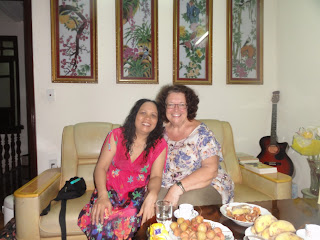 We sipped tea made from flowers from Sapa, and ate bananas and lychees. Mr Than speaks quite good English, so we had no trouble making conversation. After a while we got around to security. He has been very concerned that our gate is often left open with Tony's motorbike parked in the courtyard within easy reach of an opportunistic thief.... an open invitation to a crime that would cause headaches for the local police... Matter of fact, he dropped in only yesterday when Ian was visiting and he and Tony were sitting at the kitchen table having a cuppa (within sight of the front gate). Mr Than came in and insisted that Tony bring the bike inside and shut both the front door and the gate!

Nga doesn't speak English, so he translated for us. Their son and daughter are both studying in Hà Nội and I have been invited to come for a small party next time they come home for a weekend.  I look forward to that.  They are so kind, they even offered me their spare bedroom if I ever needed a place to live!

It was fun to see the faces of my neighbours as he dropped me home (still without a helmet....).