Khánh's sister had also come home for the long weekend. She is studying in Hà Nội and doesn't get home very often, so Khánh invited me home for dinner so I could meet his mother and his sister.  He came to pick me up, and Xuân came too.

Their home has been compulsorily acquired by the government and they've been marking time waiting for the compensation money so they can relocate, but it has been a long time coming. Khánh's Mum will be moving out soon so Khánh will have to stay on alone as a caretaker. In the meantime they are looking forward to building a new house.

We were also joined by Khánh's adopted grandparents, and dinner was all ready when we got there. Those spring rolls were the best I've eaten. There was a hot of broth simmering on the electric hotplate, and Khánh's mum kept loading portions of chicken into it to cook for a little while. She also cooked portions of rice noodles as well as greens and there was a constant flow of fresh hot food. Love Vietnamese cooking... 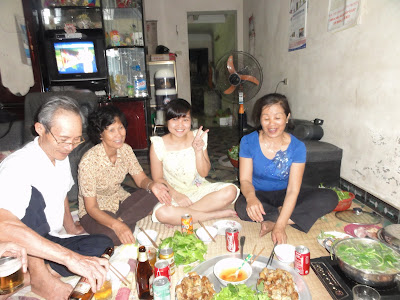 Even though none of the family speak English, the boys translated for me and we had a relaxed meal. As you can tell by their faces, they are lovely, gentle, happy people. This is Tiến, Tuyển, Trang and Giang (Khánh's mum ) 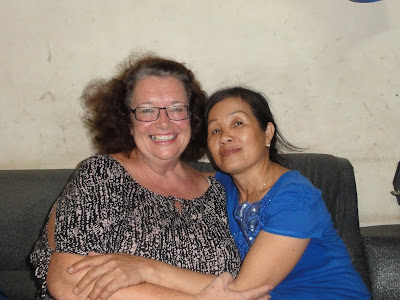 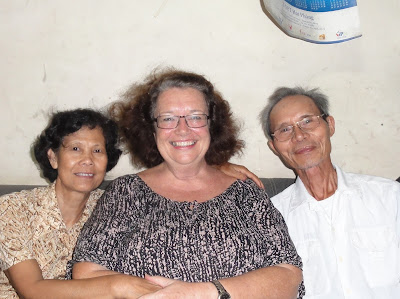 After dinner we sat on the lounge with the fan keeping us cool and had tea. Then Khánh's 'grandparents' invited us over to their house for tea, so off we went. They are retired, and live fairly close by. Several of their neighbours came in to visit with us and share a cuppa. Then we were invited to go and visit their son's house, a short walk away. I was a bit surprised since by then it was about 9.30pm, but they assured me that this was quite normal. So off we went... Giang, Tuyển, and I arm in arm, down the lane. It was a grand new house, beautifully furnished. His little daughter brought out her English text book from her Summer class at Apollo language school last year and sat with me while we went through it. She did very well, remembering the words and pronouncing clearly. 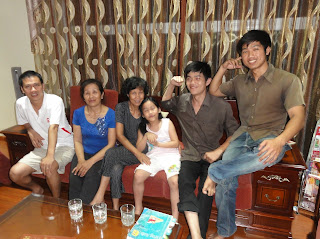 This time we left half glasses of water, instead of half cups of tea... for about the tenth time in two days! Between Khánh, Xuân and Quỳnh I have met so many friends and relatives in the last two days... it has been quite wonderful.

Everyone is so hospitable and friendly here... I have really enjoyed this holiday.