Last night Khánh took Will and me to the VIMARU Guitar Club Concert. Khánh used to be a member, but has been too busy studying in this, his final year, to participate lately. We met a few of his mates when we arrived, and he told us he had organised VIP seating for us...  right in the front row with all the heavies! We had a table set out in front of us with flowers, glasses and water and programmes. Will freaked out that we were sitting in someone else's seat, but there were several still empty by the time the concert started, so we just relaxed and went with the flow. I guess we stand out like a sore toe anyway... no chance of merging into the crowd. The men sitting alongside us included the Deputy Dean of Students, and both the President and the Secretary of the Student Union. Quite honestly, I wondered why the man next to me bothered to come - he spent the whole time texting on his phone and left early. I guess it's politic to be seen to support these events.... Still, he was very friendly and keen to chat (even during performances!) 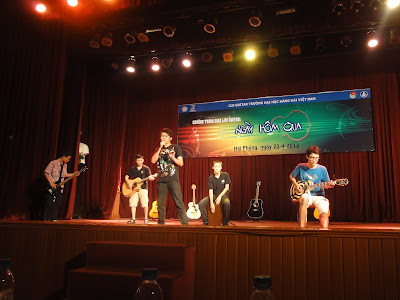 How cool is the 'drum set'?  They put a mic at the back of the box he's sitting on, and get a great variety of sounds by hitting the front panel. Very effective! 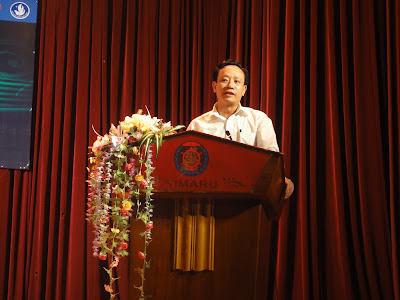 This lovely man is the Deputy Dean. He made a short speech, which he very kindly summarised for us in excellent English, encouraging the students to get involved in such activities as the Guitar Club. We were given a welcome, too!

Then came a variety of items, all of which were enthusuastically recieved. It is quite remarkable here to see the freedom the young men have to express their love and admiration for their mates. Both guys and girls gave their favourite performers bunches of flowers as they left the stage. What a shame sexuality has become such a major issue for us that such open affection would be misinterpreted and sullied in our culture. 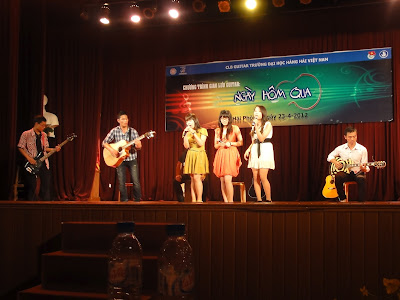 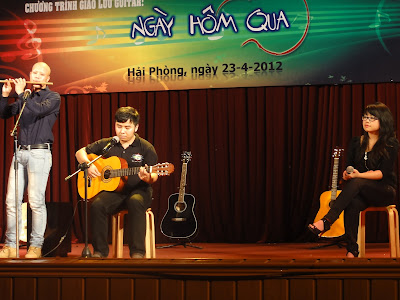 One of the best singers of the night turned out to be one of the students from my church class... fabulous voice! 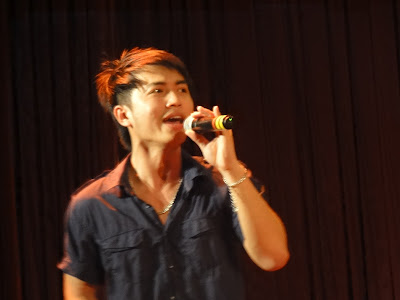 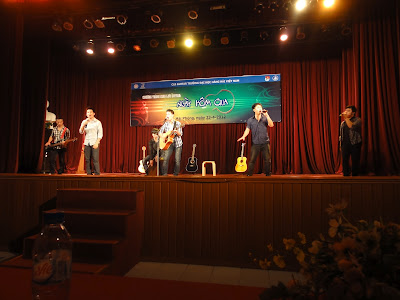 At the end of the concert, Will and I were urged to join the students on stage for photos... I was even given roses by several students. 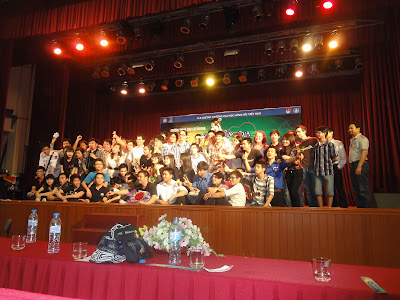 Then of course, it was time for photos... this is Khánh's friend Mạnh with Will. 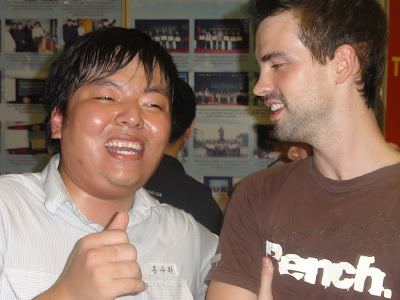 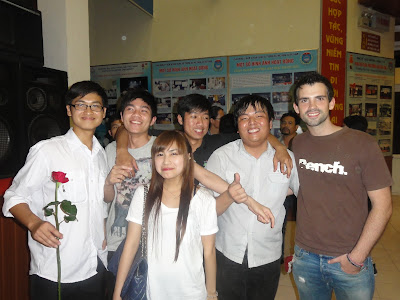 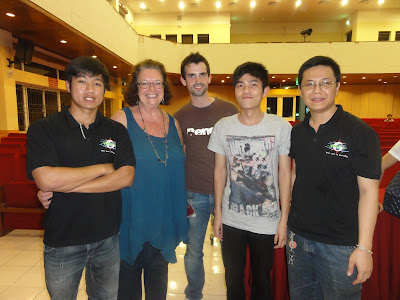 
Will hadn't eaten ( I had made chicken soup and crusty bread for the boys and I ... didn't know Will had the night off too, and would be joining us at the concert, so he missed out ... ), so we went to Meagans, where there was a crowd of teachers unwinding over a beer or two. 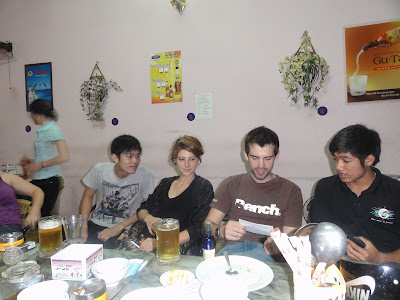 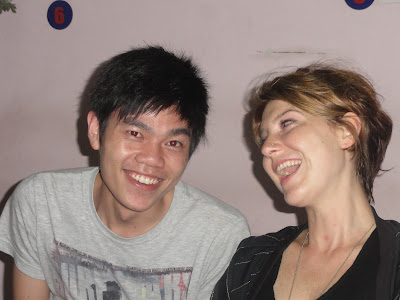 I also met David, who only yesterday appeared on my facebook wall as having accepted my friend request, which is very odd, since I didn't know him before tonight and definitely did not send him a friend request. Several times now in the past few weeks random people have accepted a 'friend request' that I didn't send. It's quite disturbing. I have no idea how these requests are being generated... nor how many have gone out to people who have not accepted, but have presumed that I was some kind of desperate internet stalker or something!!!
Anyway, he is Nina's boyfriend, and is a very interesting guy... though he did wonder who I was when her accepted me...   hmmmm
Another very interesting person I met tonight was Cathy. She's British and is here on a 12 month contract, slowly working her way through Asia on her way to New Zealand, where she has friends at the Wetter Studio (where they did all the special effects for the Lord of the Rings movies).

A beaut night, and to top it off I have tomorrow off as well!