The other day, when I walking down the alley, I bumped into one of the three ladies I met at the funeral last year and she invited me over to her house for a visit today. Xuân dropped in early in the morning and offered to come with me and be my interpreter, which was marvellous, since the language barrier would have been a real problem.


I thought her name was Dot, but turns out it's Tuất. She had three young men there who are all seamen and speak a little English. The one in the white shirt is her daughter's fiancee. The other two are obviously very much at home here. Last year when I met her, she had lost her husband 7 months before, so was finding the funeral hard going. I brought photos of my gorgeous family with me and after we all looked at them I asked her about her family, only to be told that her fine young son, whom I met last year had died only last month when his ship went down at sea. These lovely boys were his mates. 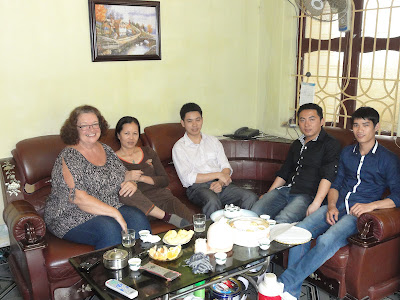 We talked for a while, with Xuân doing a great job as interpreter, then Tuất got a text message inviting us to visit the other ladies from that night last year. So off we went, down an even narrower alley to Thang's house where I was greeted like a long lost friend. We were given fresh pineapple and a glass of water, and once again I showed my photos. By then Lan had come over from across the lane (last year we'd ended up at Lan's house singing karaoke). They were both inviting me to stay for lunch, but we had already accepted Tuất's invitation. I know we arranged to come for lunch on Thursday, but I thought it was with Thang, but Xuân said later he thought the arrangement was with Lan!!  Guess we'll find out on Thursday....

Anyway, it was all very excited and enthusiastic and after visiting for a short while we headed back to Tuất's house. She had her arms around me and the neighbours sitting at a tea stall along the way were all very interested... Xuân didn't translate any of those conversations...

It was when I tried to take photos at Thang's house that I discovered I'd left the memory card for my camera in my computer, so Xuân ducked back home and got it for me, bless him.  Meanwhile, Tuất and I finished off preparing lunch. She had much of it ready to go. Vietnamese kitchens are very small, but they seem to be really good at organising themselves so it all comes together effortlessly in the end. She already had beef broth simmering, squid cleaned, a fish 'n prawn rissole mixture prepared and the rice cooking. We chopped a few vegies and I fried the rissoles (using long chopsticks, mind you!) while Tuất stir-fried the squid with garlic, chili, and a root vegetable I don't know the name of. 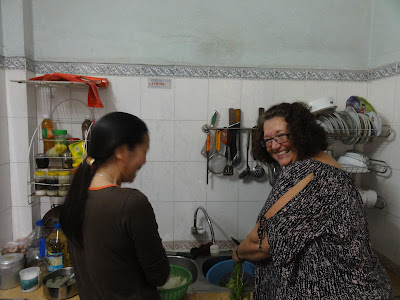 Normally, people here sit on the floor to share a meal, but in deference to their guest, we sat at the table. I must admit, that is WAY more comfortable for me! 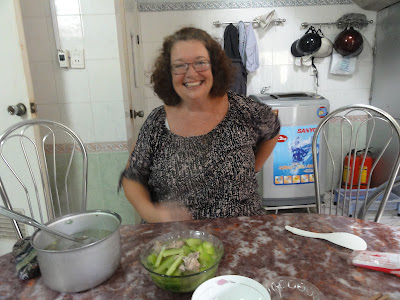 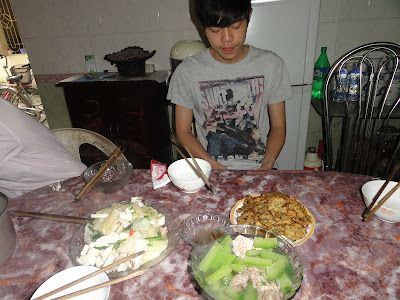 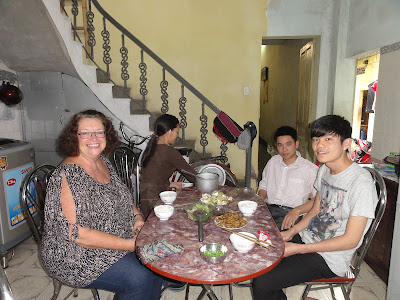 Six of us shared the meal, then two of the boys washed up while the rest of us went and sat over green tea in the living room. I asked Xuân when would it be polite for us to leave, and he said they had mentioned going to the market at 12, so since it was already 20 past, we said our goodbyes and promised to return soon and walked the short distance home.

Xuân went home, I spent the afternoon relaxing, blogging and preparing lessons. I caught up with Mai, who is due to have a baby in September. This is the year of the dragon , so it's considered VERY auspicious to have a baby this year - especially a boy. She's thrilled, because her baby is a boy and I'm thrilled because I'll still be here! I taught an early class and Khánh picked me up so we could study IELTS with Xuân and Quỳnh, which we did until 10pm.   Great day!