Back In Việt Nam


It was an easy trip.. on Wednesday I flew out of Coffs Harbour at 6.30am to Sydney (Qantas), and left Sydney at 11.30am (Vietnam Airlines). I was stunned when the customs lady at Mascot wouldn't let me take my unopened jar of Vegemite on board in my hand luggage... how would a terrorist blow up a plane with a jar of Vegemite? Maybe he could throw it at someone??? I was totally unimpressed, but she was adamant that it was not allowed. Spewing!!

The second leg was was a nine hour flight with Vietnam Airlines and I had four seats to stretch out on for a nap. So I enjoyed 3 movies, 2 meals and a couple of hours' sleep as well... no complaints! Giang had arranged for a car to be waiting for me at Saigon Airport, so that was easy, too. It was peak hour (5pm) which meant a slow trip in heavy traffic to the hotel. You know you're in Việt Nam when the taxi is forced to give way to motorbikes that squeeze through impossible gaps like a school of fish!

Once again, I stayed at the Spring House Hotel on Phạm Ngũ Lão Street, where I stayed with Katie in October last year... even had the same room. I skyped Katie to let her know I'd arrived safely then watched some TV, dozed and eventually dragged myself downstairs to find some dinner. With the four hour time difference 7pm here is 11pm at home, so it felt very late for me!  There were plenty of people about. 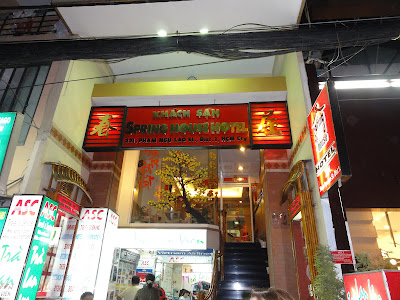 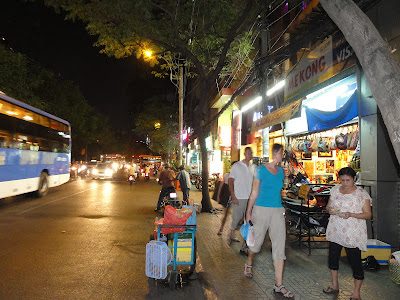 I bought a new sim card and credit for my phone from this lady on the street. 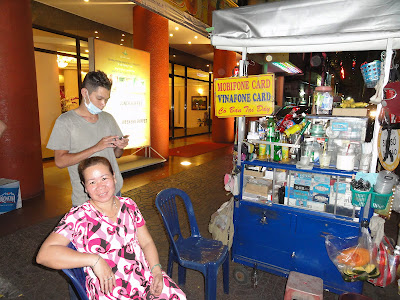 They are very kind here... I just have to hand my phone over and they do all the button pushing necessary to get it all happening. I didn't end up going far - too tired! I settled for a savoury bun from the bakery next door to the hotel and crashed by 9pm (1am).

After a very broken night's sleep I toddled downstairs to meet Giang (Ratbag) at his post at ASC Travel Agency. 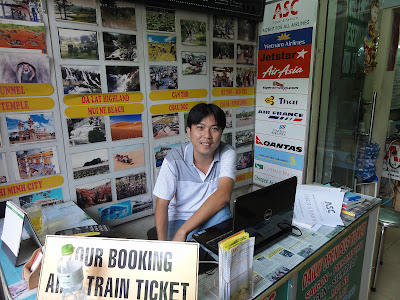 He directed me down the street to Quinh - a popular restaurant for phở bò. 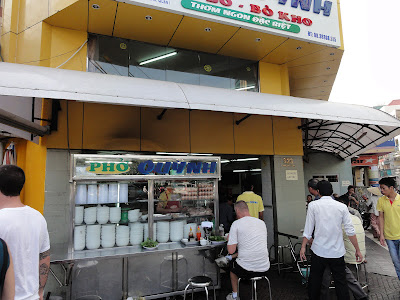 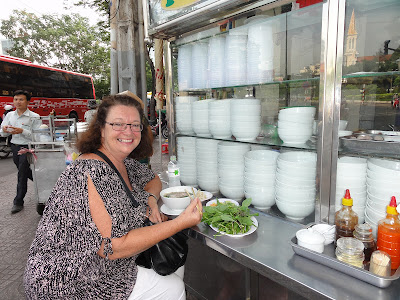 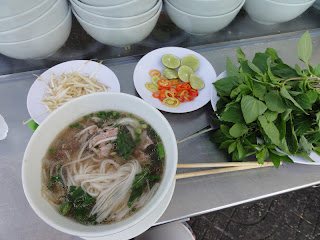 Mid-morning, Heather from HJ Consultancy dropped by the hotel with three bags of sticky-balls for me. They are a fabulous tool in the classroom and Gene had asked me to organise some for the mob up here. (You draw a target on the whiteboard and get the students to throw the sticky-ball and where it lands determines what they have to do /say etc.... the variations are limitless). 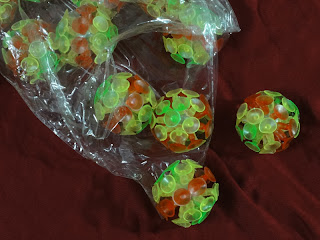 they even flash on impact...

I was feeling pretty tired, so I put my feet up and read till it was time to lug my bags down to Reception and check out. I left them there and jumped in a taxi with Giang and we went to  a busy restaurant nearby called Bún Chả Hà Nội and enjoyed lovely fresh Bún Chả for lunch. I do love Vietnamese food. 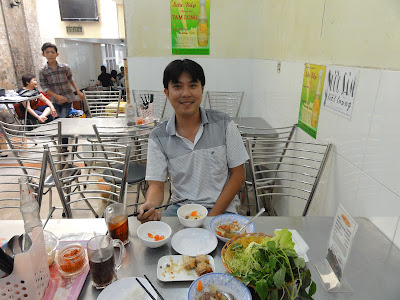 Giang works every day in the travel agency and then goes to classes seven nights a week studying for his B. Business degree so he can get  a better job... maybe even in Australia or Canada. He had relatives in Melbourne, so he will probably look there when he finishes his studies. Such a hard worker, and a cheerful, helpful bloke to boot. Katie will catch up with him when she comes through Hồ Chí Minh City in November, too. 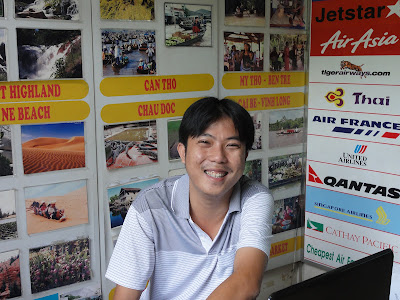 Then I took a taxi to the airport and by 5pm I was exchanging hello's and cuddles with Gene, Khánh and Xuân at Cát Bi Airport, Hải Phòng . It was so lovely to see them! Gene and I took a taxi while the boys followed on their bikes and we were soon back at the same house on Văn Cao I lived in last year. First thing I noticed is that our lane has been re-paved - a 10cm layer of concrete has transformed it from the pot-holed dirt lane it used to be into a very respectable looking locality!

I'm back in my old room, and straight away we skyped Katie so we could all say hello. I unpacked some of my stuff, then Gene needed to go home and get ready for a 7.30 class. It was decided we'd all have pizza at Gene and Becki's and that Will and Emma (the new teacher from England) would join us. So we dropped Gene off and picked up the 2 boxes of stuff I left with her (lesson plans etc) and came back to the house and did a bit more unpacking and a lot more chatting. I got to talk to Jordan and Bailey and Tyler on skype. The girls read their homework to me. It was very hard to leave home this time, but knowing we could communicate via skype was my consolation....

Becki was due home at 7.45pm, so Khánh, Xuân and I rode over there, stopping off at an electrical goods store so I could buy a couple of power boards that can take Aussie plugs as well as the straight plugs they use here. How  easy it is to do simple little things like that with the boys there to help me. Last year I would have had to wait till I went to school so I could ask someone to write down for me what I needed, then find an appropriate shop (wandering around on foot) and hope for the best. But tonight, it took just a few minutes from when I described to Khánh what I needed (a converter plug) to having bought something even better (converter powerboards) for considerably less. I so appreciate the difference these precious friends make to my life here!

We arrived before Becki so Xuân  had the bright idea we should 'hide' across the lane from their house and surprise her when she arrived. We took some photos while we waited... 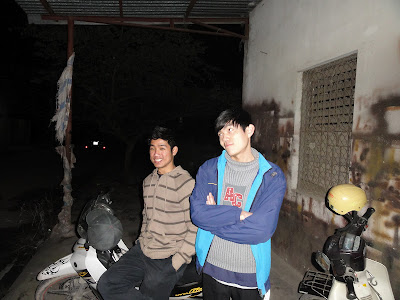 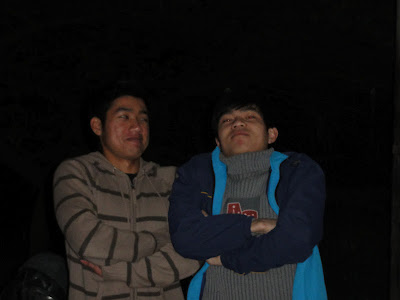 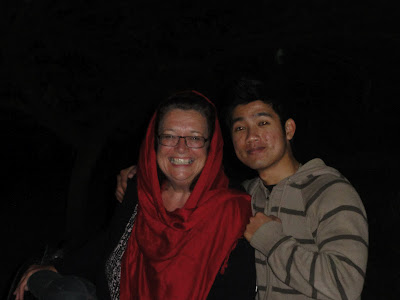 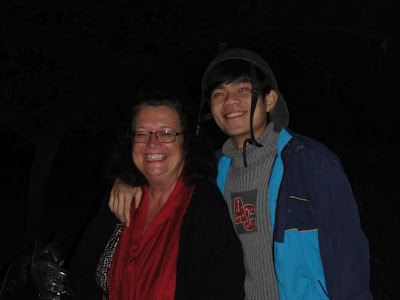 and next thing we knew, Becki rode up on her (silent) electric bike and surprised us instead! Since it was already 8pm and we were hungry, Becki ordered the pizza and we had some and happily enjoyed her hospitality while we waited for Gene, Will and Emma to arrive. By then it was close to 10pm (2am Coffs Harbour time...!) but we had a great time as they filled me in on all the goss about what's been happening in my absence. Emma is a delightful young English lass who will be teaching with us for 6 months. She arrived in February. 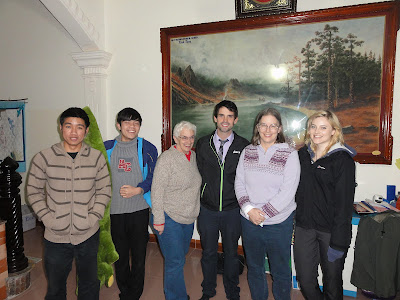 It was quite cold riding home and I was SO tired! But what a wonderful welcome. It really is a blessing to have such beaut friends here. This year there will be never a dull moment, that's for sure!

Tony (my housemate - a teacher from Australia) was home when I got back, so we spent another half an hour catching up and it was close to midnight by the time I got to bed. Ann rang during dinner to say welcome back and tell me I had a class tho teach at 7.30pm tomorrow night... so I definitely need a good night's sleep!