There is no translation for Chè Huế


This morning I taught the volunteer Nam Phap church class again. Khanh picked me up at 8.30am. The 2 hour class goes very quickly. During the class we were talking about lotus salad, and Net offered to take me somewhere I could have some after the class. So a bunch of us headed to this little cafe which is a favourite haunt for local Uni students. They had run out of lotus, so we had this amazing 'drink' called Chè Huế,  or chè thập cẩm .  There is nothing like it in our food.. it's served in a beer mug with lots of crushed ice. The liquid is soya milk and coconut milk and into that is added shaved coconut, sago, beans, little rice dumplings and I don't know what else... a variety of tastes and textures that is quite delicious. You eat it with a spoon and it's quite filling. 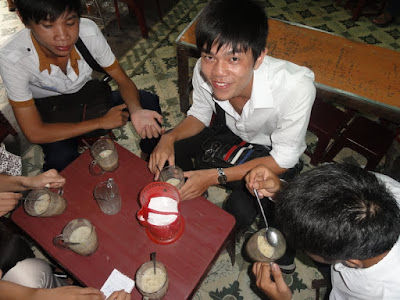 That's Xuan's brother, Dat, next to him. See the little stools behind him? ...good thing I've lost plenty of weight ! 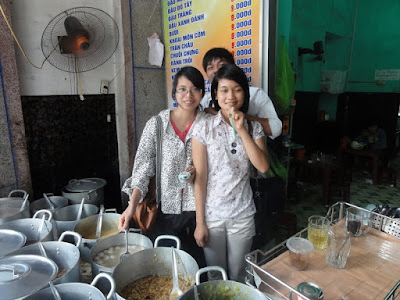 I took this photo to show the 'kitchen' which is in the front of the cafe.You can see the cafe behind Net, Quyen and Xuan.

After that treat, Khanh took me to Big C so I got home at mid-day having had another little adventure AND having re-stocked my kitchen. And guess what, tonight I only had one class so I finished early!... That's why I had time to blog...﻿
Posted by Annie Gooch at 10:33 PM