Today I have a day off! My second day off in 64 days!! So far, I have slept in, had breakfast, chatted on skype and sorted my photos files. I'm hoping to catch up with Lina and go to the movies later, but we'll see ...

There are now three full-time and one part-time teacher at VATC with one more (Gene) in the US due to return next week!! Woo-oo. So I got A DAY OFF.

Here they are  - Lesley and Ian, and James pulling a silly face (he's always clowning around): 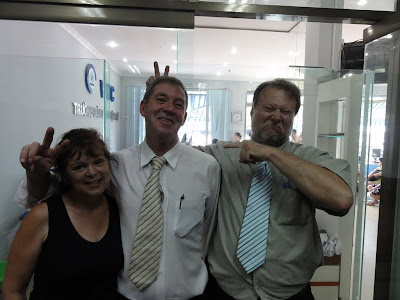 First came Ian from Australia (he's in the typhoon bog). He is back for a third stint at this school. Everyone loves him and he obviously loves it here. Last week his wife Lesley joined us part-time. She's teaching the little ones and children's classes. They are living at the (no) Star Hotel.
And the latest recruit is James (a very loud brash American). He's from Michigan and has been teaching in Asia for several years, mostly in China. He has moved into the house and is settling in to teaching all levels with great enthusiasm. He has rearranged what was the girls' room and it looks spacious and comfortable now. So Mr Cuong has another regular customer.
I picked up my pants from the expensive tailor in the city centre after he had to remake them because the first lot didn't fit. They are still too low in the crutch, but so much better than the other ones I had made when I first got here. And the fabric is gorgeous... fine Italian cashmere wool - light and cool and it breathes - much more comfortable than synthetic fabric. Then Lina dropped in with the four  tops I had made by her dressmaker and they are refreshingly colourful and fit beautifully, so I feel a bit like a butterfly. 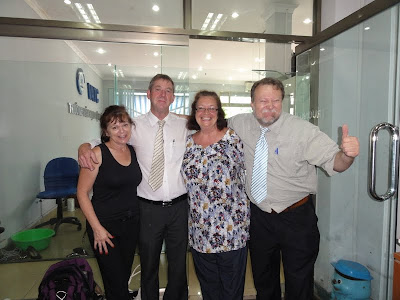 (See? I told you my hair is falling out by the handful...)

SUNDAY 10th July
Now it's days later... I ended up going out to Lunch with Helle and Ann to BKK restaurant again, then Helle dropped me off at Parksons - a big department store like Meyers. Everything's so expensive the prices are pretty much what you'd pay in Australia! Nevertheless, I found some Revlon lipstick I'd run out of and a whole shelf full of novels in English (rare as hens teeth in Hai Phong) ... so I bought three.  I took a photo of some of the shoes ... the ladies here wear the most gorgeous shoes with outrageously high heels... since they ride everywhere on motorbikes and park on the footpath wherever they want to go, they never have to walk far. Check them out: 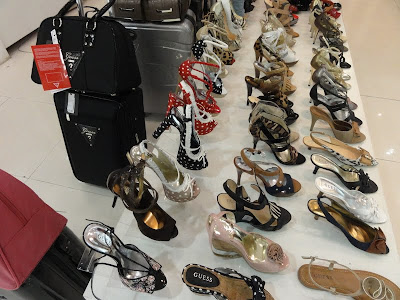 I got one of the shop assistants to model some for me :) 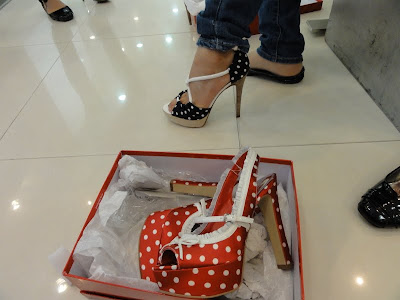 There's a cinema complex on the top floor of the building (above the bowling alley), so I headed upstairs and went to the movies! I saw Transformers 3 for $2.50. The seats were very comfortable and apart from the Vietnamese sub-titles, I could easily have been at home. Next time I'll shout myself some popcorn, too. Since I was right near Big C I ducked into the supermarket and bought some groceries, then caught a taxi home and got stuck into one of the books I bought: Second Glance by Jodi Picoult. I finished it tonight ... an entertaining read.