Tonight James didn't show up at work in time to teach his class. He didn't answer his phone, so Ann called Mr Cuong, (who was due to pick James up at 7 o'clock) only to be told that James had been seen getting into a cab with his bags.

Today was payday. He collected his two weeks pay and snuck off like a thief owing money for tax, power and water etc. He paid no accommodation expenses (they are deducted from the pay at the end of the month), just free-loaded for three weeks. And the bastard borrowed my raincape last week, left it on a bus and didn't bother to replace it. He also left dishes in the sink that have been growing mouldy for 5 days.
Ian had him pegged as dodgy from when he first arrived... no money, "lost" passport ... Maybe he came to Hia Phong to hide out for a couple of weeks?

Ann was understandably devastated. He had been spinning a yarn about being sick with a gastric bug and sucking up the sympathy and advice from everyone and was cadging to have Monday and Tuesday off to go to Hanoi to seek medical treatment. I guess he always intended to slink off, and once he got some cash he didn't care about deserting the classes he was scheduled to teach over the weekend.  Tonight I took his Level 7 class and combined it with my Level 5 class so the students weren't left in the lurch... but I have no idea how Ann will handle the classes tomorrow and Sunday.  And to top it off, her mother was taken to hospital today for emergency surgery for kidney stones, so she has her 6 year old daughter here at school ... I took this photo of them before we knew about James. 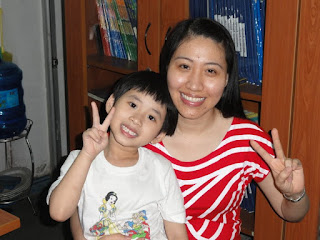 I just wonder how people who just up and steal away manage to live with themselves. Don't they have a conscience? How do they justify their total lack of integrity? Is it that they are so wrapped up in themselves that they are oblivious to the consequences of their actions? Fair enough  if you decide that you want to leave... but why not come out in the open and say so and give notice... why creep away leaving others to cover your debts and responsibilities?

James' absence won't affect my work load. I'm already working every shift... and I certainly wont miss his mess on the floor and in the sink, or his constantly crying poor. He was very slovenly. When the washer overflowed, he threw some clothes on the floor and left it for someone else (me) to mop up... who does that? If there's an accidental mess in your house you just hop in and deal with it! He certainly didn't enhance my Hai Phong experience much... so he won't be missed.

But I do feel so sorry for Ann. She was already carrying a heavy burden of responsibility to stretch the available teachers over the classes waiting.  I can but pray.
Posted by Annie Gooch at 10:48 PM