After a very light week, I had a very heavy teaching load this weekend... four two hour classes on Saturday (7.30am till 9.30pm), followed up with three two hour classes on Sunday and an evening class at Mai's as well (7.30am till 7.30pm).  But my schedule wasn't that crowded when Khánh suggested on the way home from the Kessels' on Friday night that we should go swimming at 5.30am on Sunday... and I agreed...!  It wasn't until Saturday when we got news that Sun had fallen on the stairs and hurt her eye that Ann asked me to take her early class on Sunday morning.

So I set my alarm for 5am and about five minutes later it started to rain really heavily. But by then Khánh was already on his way, so with a change of clothes in my backpack and my raincape I climbed onto the back of his bike in the rain a 5.30 am!!! I'm surprised the sun was even up! Crazy. Anyway we got to the pool at about 5.45 to find that the lifeguard hadn't showed up for duty so they weren't open. (Someone got to sleep in!)  It was still pouring, but we found some people selling hot bánh mì pate under an umbrella so at 6.30am we were sitting (slightly drenched) at the kitchen table eating it when Tony came downstairs for a shower... just a wee bit surprised...

Well I got to school in time for my 7.30 lesson and the day followed as usual... two classes with delightful littlies (8-10 year olds, then 3-5 year olds)... home for a bite to eat and a nap, then back again for more littlies 3-5pm.  This week I also taught a class for Mai in the evening after which Khánh picked me up again to take me to the pub quiz. We stopped off for a bowl of phở gà on the way, which was delicious, but a bit frustrating with all the bones. I'm not yet very adept at picking meat off bones using chopsticks not fingers!

We got to Paragon Cafe a bit late, but there wasn't a soul there from the pub quiz mob. But Ian and Lesley were, with Ali, one of Ian's students. So we sat with them and Khánh, Lesley and I made plans for going to Hạ Long to visit Hannah on my day off on Thursay. After a while, the pub quiz mob began to arrive and settled outside. They are mostly English language teachers, and most of them were from the big school, Apollo. They're a very friendly bunch and we soon divided into teams of 3-4 to a table. 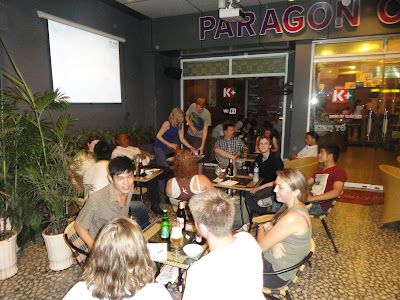 My team included Khánh, Phil (from the US), and Irene (an Aussie). The two standing are Emily (England) and James (Scotland). They won the last quiz, so they prepared the questions for this quiz. Xuân joined a team including two girls from Australia and a young guy from the US.

Such nights are always fun and when they tallied up the results at the end, our team won!!! ...thanks largely to Phil... It cost 50,000d to play and we came home with 150,000d -Yeay! Well. I came home... all the rest continued to party on through the night. I was sleeping like a log after sixteen hours of teaching in two days and a very early start!!