Try and picture this...


Try and picture this... me on the back of Mr Cuong's little bike tucked under his rain poncho (while he was wearing it!) scooting home in a rain squall... yep, gotta admit it was pretty funny. It was only sprinkling when we left school for the ride home, but it had been raining on and off all morning. We were half way home when we could see that it was pouring further down the street, so Mr Cuong, God bless him, pulled over and got me to hunker down under his rain cape so I wouldn't get drenched! So that is how I rode home - tucked in behind him holding the cape to stop it flapping seeing nothing but his singletted back and the road beneath us. Hysterical. I can only imagine what we looked like.
There is a severe storm warning out for this evening, so classes have been cancelled. I taught kiddies for 4 hours this morning, and now I have the luxury of the rest of the day off!

I've had a busy but great week. I visited my friend Mai's new language school on Sunday night and it is beautifully set up, but like all the language schools she is desperate for foreign teachers... seems we're as rare as hen's teeth these days.

Then on Tuesday morning I went to the Star Hotel to Ian and Lesley's where I was picked up by a taxi and taken to a kindergarten 20 minutes away. Lesley has been teaching there two mornings a week, but since she's doing so many classes at VATC (now VAIE) she is finding that teaching voluntary classes at the local church  three mornings a week (which she has been doing ever since they first came to Hai Phong three visits ago) as well as two Kindy classes is too much. So I went in her place. There were about twenty 3-4 year olds who were just gorgeous. We sang songs and did flashcards for an hour, then the taxi brought me home. It was very hot, because it wasn't air conditioned and I was saturated by the time I finished, but I really enjoyed myself and the pay is good, so I'll do that class each week. I'll take my camera next time.

On Friday morning I went with Lesley to her voluntary church class. Turns out that they are temporarily meeting at Mai's new school. Two of the students gave Lesley and me rides on their motor bikes. I was on behind Xuan, and we chatted the whole way. There were about thirty young adults at the class, which was a discussion about money / currencies. Two hours went very quickly. Afterwards, we walked down the road to a cafe called Sunflower and sat with some of the students over sữa chua nếp cẩm (yoghurt and sticky rice with coconut milk). 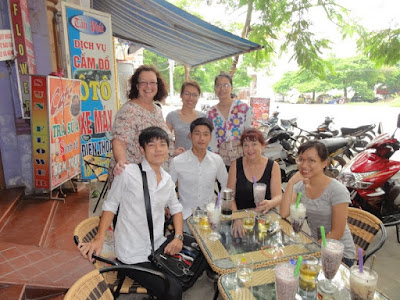 Me standing with Thao and Net, and Xuan, Khanh, Lesley and Nhan sitting. 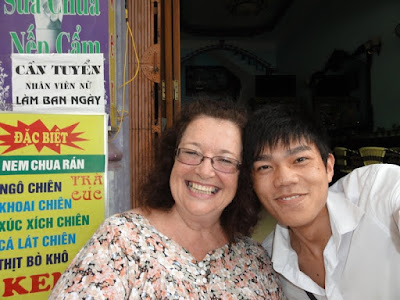 Xuan was keen to try out my camera.

As you can see, we had a delightful time, since all of them can speak English well enough to enjoy a conversation. I hesitated to include this photo of me laughing like a trout, but here it is: 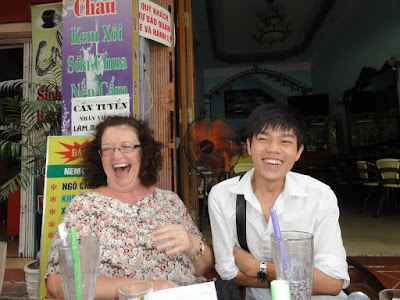 There were some wealthy looking young men smoking waterpipes at the cafe next door. Apparently the one driving the flash red car is a local drug lord and the police are frightened of him... no, I didn't take photos of them!

Khanh gave me a ride home. Both he and Xuan have offered to give me a ride where or whenever I want to go, which is wonderful. They'll be able to practice their Engish, and I'll get to see much more of Hai Phong and surrounding places. Lesley enjoys outings with them all the time, so I'm looking forward to the opportunity to go too.

Well I've had a relaxing afternoon and evening, and there has been no sign of the storms that were forecast... but I got to talk to Greg and Gemma on skype for the first time in weeks... I reckon God orchestrated it - He's always looking out for me!
Posted by Annie Gooch at 9:46 PM