They wouldn't take 'No' for an answer...


There's a very popular hot-pot restaurant on Van Cau that spills out onto the footpath and now flows into the building next door most nights. There are a bunch of very cheerful, friendly young people working there, and for the last few months they've always called out 'Hello!' every time I walk past, but I've never stopped for a chat or a meal. Anyway, today after eating at Texas BarBQ with the Wednesday ladies, I was heading home and went to walk past, saying hello as usual. Several of the young waiters were eating their lunch at a table on the footpath, and they wanted me to sit down and join them. I started to say no thank you, trying to explain that I had already eaten, but they insisted, and one young man jumped up and pulled out a chair for me. So what could I do?

I sat down and they passed me a little bowl of rice and a stir-fry with bean sprouts and pork and vegies and opened up a new set of chopsticks, and I had some. We laughed a lot and managed to communicate names and some basic details, like I teach English... not much else... Several of them came over to introduce themselves and say hello.  So I got out my camera and they loved being photographed... 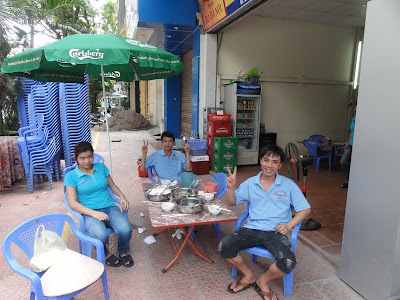 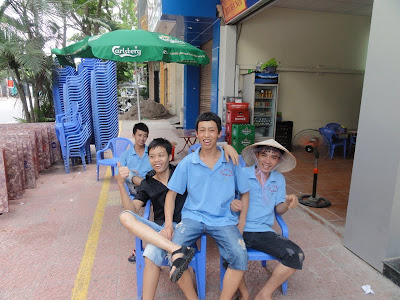 As soon as the camera came out, the shennanigans began (that's my hat...) 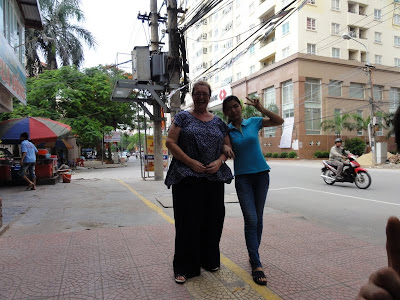 Huong is a typical Vietnamese girl... they are all shapely and quite gorgeous. 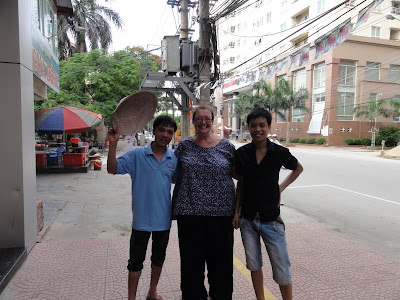 And the boys are garrolous and charming as well as good looking!


After saying goodbye, I headed for home. The cafe at the end of my lane has been completely re-built over the last 6 weeks, and opened for business today. So I took a photo to show all the floral tributes sent by well-wishers. 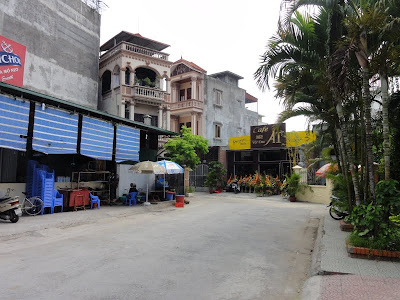 It used to be E.T. Cafe, and now it has been re-established as A.T.Cafe.

Once again, the people in the 'kitchen' outside the restaurant on the left saw me with my camera out, so they posed for a photo too... 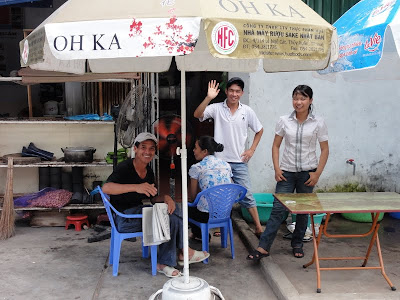 So even though it was so hot I was dripping, the walk home is always cheerful!
Posted by Annie Gooch at 8:21 AM