TUESDAY  12th April
Did I mention it was hot and sunny yesterday?? Well after we left the recording studio it was such a glorious day after months of grey, that Eathen, Amie and Sarah decided to ride out to Doson Beach (20Km each way)... with no hats, or sun protection Eathen and Sarah got REALLY sunburnt. (Amie is built of tougher stuff... she wasn't affected!). When they finally came home last night it was a shock to see how red they were... brought out all my mothering instincts! (though I only have moituriser to offer...)
Today is a public holiday for the Kings' birthday(s).. Huong dynasty I think... so we all have a day off. Lina, one of our teachers from VATC very kindly offered to take Sarah and I to the market, then teach us to make Vietnamese Spring rolls! She took us to a little fresh food market just around the corner and down a side street that I had no idea was even there... 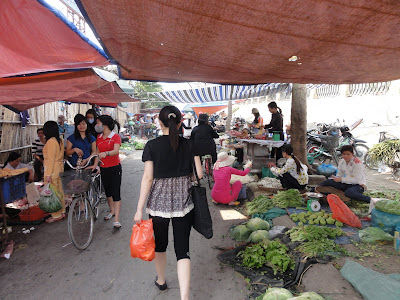 This is Lina on a mission... we trailed behind and I took photos... 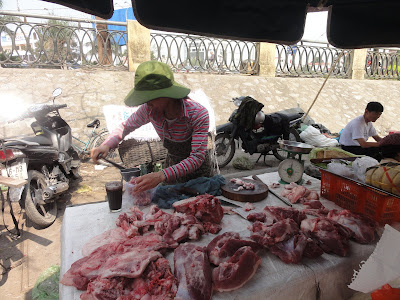 First we bought 500g of pork. Lina selected the meat and the lady minced it into a plastic bag with a little hand mincer fixed to the table. 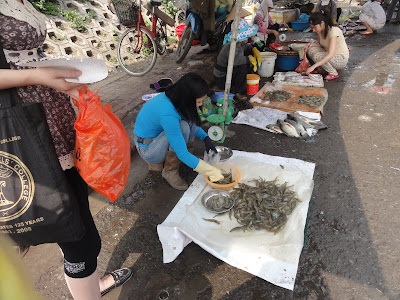 Next we bought 500g of live prawns, good fat medium sized prawns. I took this next shot of another stall which also had big fresh squid 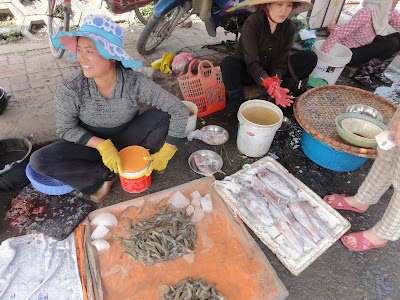 (in the tray on the right) 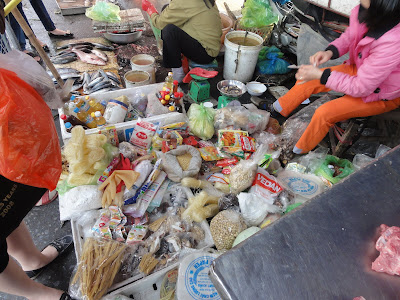 This stall is like a little general store... here we bought dried rice noodles, spring roll wrappers, dried mushrooms and 'wood ears' (fungi), and a little sachet of ground pepper. 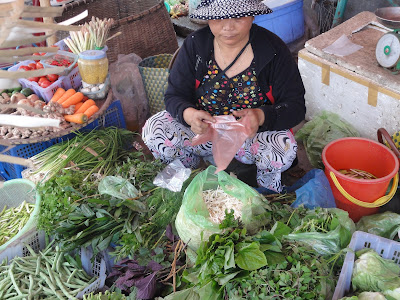 Here we bought a couple of little lettuces, some scallions (little onions), and bean sprouts. 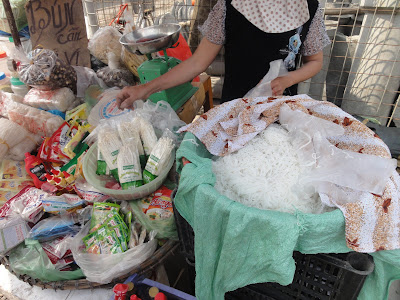 Last stop was to buy this fresh rice vermicelli noodles.  I took photos of other things ,too... you know how it is... 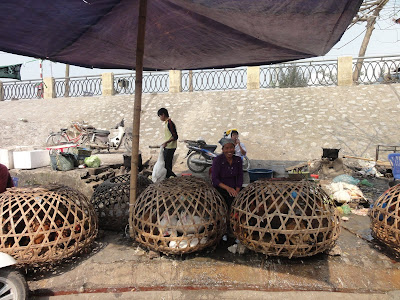 you can't really see them unless you double click on the photo, but these baskets hold chickens and ducks 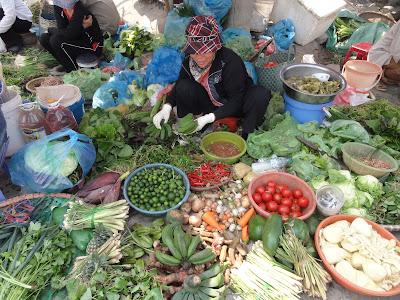 All the food looked wonderfully fresh and inviting 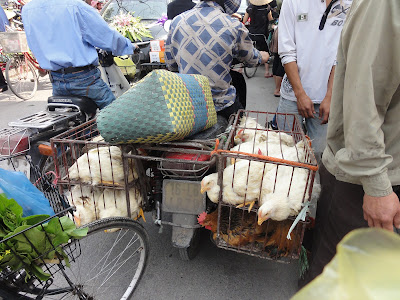 I couldn't resist taking a pic of there chickens on the back of this motor bike... as the traffic came to a standstill... the hold-up was caused by this car going against the flow of mostly pedestrian traffic, honking continually... 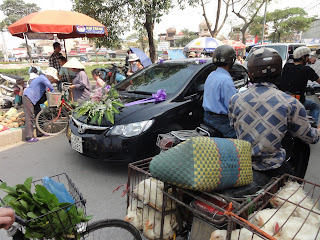 ﻿and it turned out to be a bridal car all decked out with flowers! 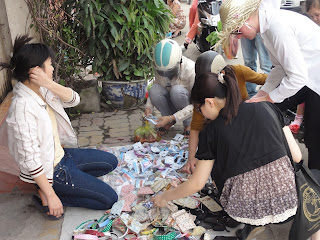 For the last purchase at the market, Lina and Sarah bought little shoulder purses just big enough for a mobile phone with a zipper pocket for some money / keys  / credit card...  They only cost 50c and Sarah reckons she should buy a heap to take back to Oz and sell at the markets for $5 coz they're perfect for girls on a night out. Lina suggested getting some from the Silk Village out of Hanoi which are really beautiful... dressier... could sell them for $10!... Christmas markets here we come??
So we walked home with our purchases and Lina and Sarah chopped and shredded and mixed and wrapped....
Lina asked Sarah to peel the prawns. When Sarah commented that they were still alive, Lina just shrugged and said "It's OK..."  Sadly I missed filming Sarah's reaction when she picked up a prawn intending to peel it and it started wriggling!... but being the trooper that she is, I got to video the re-enactment
So I got to record the event, while Lina and Sarah chopped and soaked and stirred 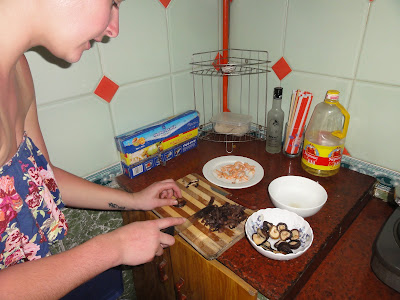 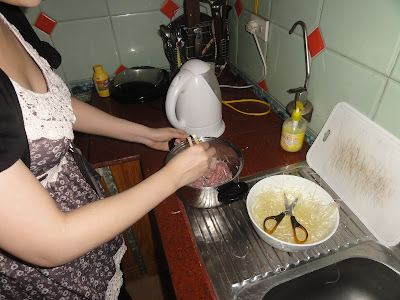 All the ingredients were stirred together 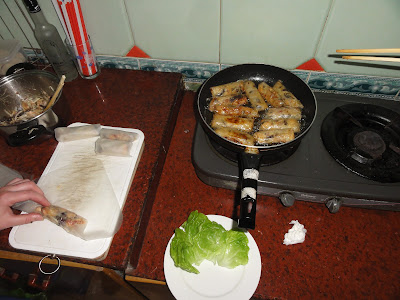 Sarah rolled the neat little parcels, and Lina shallow fried them... using chopsticks to roll them over. I think because we use tongs we break them up too easily. Over here you can get very long chopsticks for cooking... I'll have to bring some home. She even used them for turning the prawn crisps that she cooked in the same oil after the spring rolls. 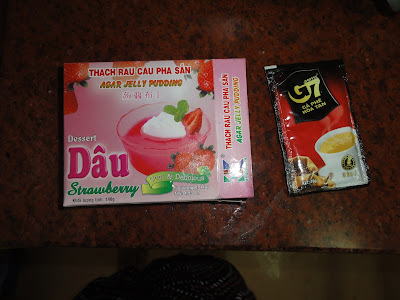 Lina even brought with her the where-with-all to make dessert... Jelly Cake (which is really strawberry and coffee instant pudding mix set in a jelly mould) 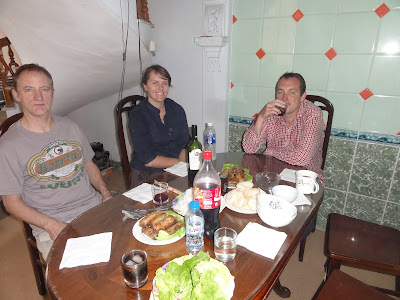 Needless to say, we had a feast for brunch this morning 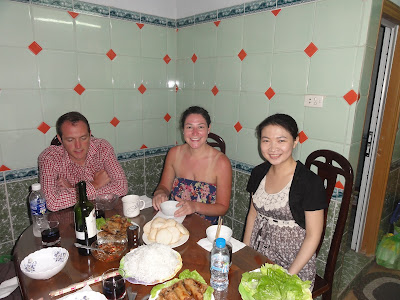 sunburnt Eathen and Sarah...  Dave cracked a bottle of good Red he'd been saving and we all tucked in. Soft fresh rice vermicelli first, some lettuce then a spring roll (absolutely delicious) topped with a great sauce made from fish sauce with fresh garlic lumps, chopped chillies, and a little vinegar and sugar... just fabulous... and we even had Jelly cake for dessert... 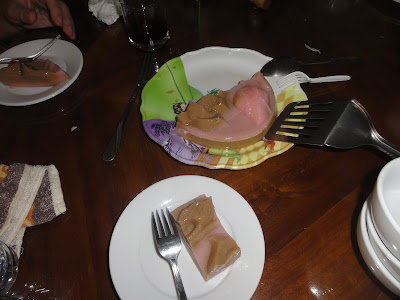 Yup... instant pudding in layers... Jelly Cake.
We had such a pleasant morning... Lina is great company. It was very kind of her to give up one of her few days off to come and share with us. Speaking of sharing, during the morning I had the opportunity to share my testimony with the girls. So it's right out there. I wonder what God will do with it?

After Lina left we still had the front of the house all opened up and it is such a lovely day. We were discussing what a shame it is that there are no parks near-by... not even a place to sit outside at all... or even a couch... It would be lovely to sit outside and read a book.  Oh well, we all retired to our various rooms... I am sitting at my window updating my blog (which takes ages!). Sarah and Amie have both gone out for a ride... not sure about Eathen (I think he's staying out of the sun). Dave's in his room. He has just confirmed his next 2 jobs... first it's several weeks in the UK teaching English at a summer camp, then he's off to Tanzania to volunteer at a school in the shade of Mt Kilamanjaro for a couple of months!  He'll get free room and board and be living right on the edge of the Serengetti Plains. Sounds exciting doesn't it? When he gets there we'll all still be here plodding along at VATC making our own plans for moving on...

There's a lovely relaxed atmosphere about the place today. Not much traffic, voices are quieter.. in fact everything's quieter. Think I can hear a Nana Nap calling... :)  See ya!
Posted by Annie Gooch at 3:53 PM